Multipurpose UDC "Trieste": what is armed with the new pride of the Italian Navy 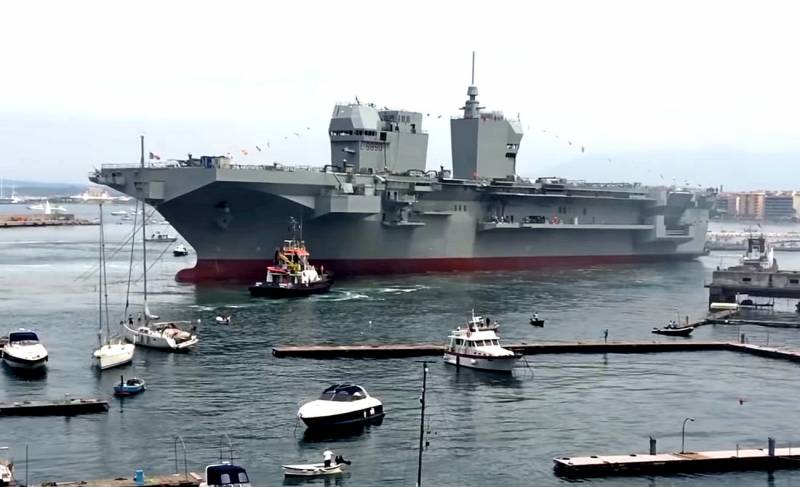 At the end of May 2019, the new Italian Trieste universal landing ship was launched. To date, the Trieste can claim the title of the largest ship in the Italian Navy, competing only with the flagship fleet, Cavour aircraft carrier, capable of taking on board the aircraft vertical take-off and landing AV-8B Harrier II.


The new ship of the Italian fleet, although it was laid out as a UDC, is in fact at least a multi-purpose vessel or a full-fledged aircraft carrier, which is designed to base F-35B short-range take-off and landing fighters. It is no coincidence that the Trieste fleet of Italy must replace the light aircraft carrier Giuseppe Garibaldi launched in the 1983 year.


The new multi-purpose universal landing ship, named Trieste, was laid down as part of the Italian program for the construction of the 2014-2015 fleet of the year. It was then that Parliament passed the law on the fleet, the total cost of financing programs for which was estimated at 5,428 billion euros. In addition to the UDC already designated, the program provided for the construction of 7 new ships of the PPA type, which were called large "patrol ships", but in reality they are frigates of a new type (initially the cost of six ships was declared at 2,5 billion euros). In addition to the designated ships, the Italian Navy will replenish with two multi-purpose special-purpose speed boats UNPAV and an integrated supply ship LLS.

In fact, in Italy they began to create a new ship formation, an analogue of American AUGs. The multi-purpose UDC “Trieste” should become the heart of the future grouping, and his retinue will be several promising frigates of the PPA project and the integrated supply ship. At the same time, the Italian military made changes to the program after its adoption. In fact, this led to an increase in the displacement and size of all ships, as well as an increase in their cost. The same UDC “Trieste” at the time of issuance of the contract significantly increased both in size and in displacement.


Initially, according to the proposed fleet law, the displacement of the new ship was to be approximately 20 thousand tons with a length of 180-190 meters. But as a result of all the changes, the UDC has grown to a full-fledged aircraft carrier with a total displacement of 33 of thousands of tons and a length of 245 meters. Now the ship is officially referred to as the "multi-purpose UDC". It is noteworthy that the new landing ship was immediately designed for the basement of the fifth-generation F-35B fighter-bombers manufactured by Lockheed Martin. At the same time, the flagship of the Italian fleet - the Cavour aircraft carrier, introduced into the fleet in the 2009 year, has a smaller displacement - from 27,5 to 30 thousand tons in various sources with comparable sizes. In fact, in the near future, the Italian fleet will have two modern aircraft-carrying ships capable of receiving F-35B aircraft on board, while also performing amphibious functions.

Separately, we can distinguish history with large patrol ships of the PPA type (Pattugliatore Polivalente d'Altura). They also experienced the influence of Italian naval doping, turning into a line of full-fledged frigates. At the same time, the first two ships really surrender as patrol, but the combat capabilities of the remaining ships of the series are significantly expanded, since the inherent displacement allows increasing their combat potential quite strongly. Initially, it was about ships with a displacement of about 4500 tons. But in the process of working on the project, PPA-type warships grew to 6000 tons, and the length increased from 133 to 146 meters, while the Italian military seriously strengthened the anti-submarine capabilities of these ships. For comparison: the modern Russian frigates of the 22350 project have a standard displacement of 4500 tons and full 5400 tons. Along with the increase in the size of ships and an increase in the composition of armaments, their value for Italian taxpayers also increased, now the entire series is estimated at least 3,9 billion euros instead of the original 2,5 billion euros. 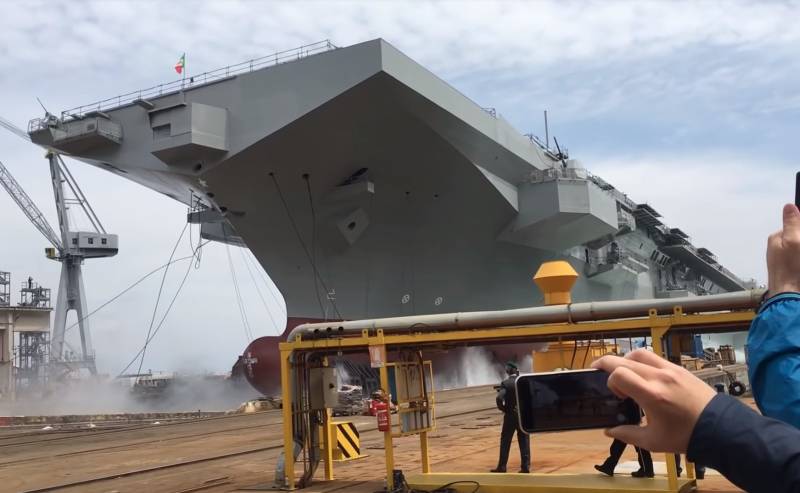 Features of the multipurpose UDC "Trieste"

As you can already understand, the Trieste is not the most ordinary universal landing ship. In terms of size and displacement, it surpasses similar ships of this class. For example, the French Mistral, which Russia didn’t get to Russia, had a full displacement of 21 300 tons. At the same time, despite the possibility of the maximum placement on board (on deck and in hangars) of up to 30 aircraft, while maintaining the possibility of their operation, the ship by the Italian military is positioned primarily as a landing. The new multi-purpose UDC should support the actions of the Italian Navy at crisis points on the planet, as well as provide transportation of weapons, military equipment, technical equipment, personnel and equipment. The ship can be involved in various humanitarian operations, including to provide assistance to the affected population, providing people with drinking water, medical care and electricity. 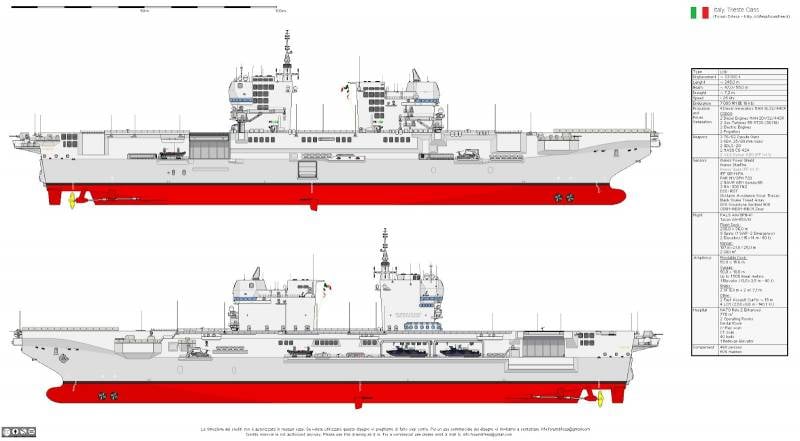 The longest new ship is 245 meters long, 47 meters wide, with a waterline level of 27,7 meters and a draft draft of 7,2 meters. The total number of crew of the multipurpose UDC is 1064 people, including 460 people of the staff of the crew and aviation groups and 604 paratroopers taken aboard. In the reloading variant, more than 700 paratroopers and evacuated civilians can be placed on board. It should be noted that we are talking about the comfortable placement of troops in cabins, if necessary, the ship will take on board a much larger number of people. On board the warship there is its own hospital with wards designed for 27 beds to accommodate seriously wounded or sick patients. There are operating rooms, radiology rooms, and a dentist's office. At the same time, container modules equipped with everything necessary can be specially installed on board the ship to increase the possibilities for hospitalizing patients.

The peculiarity of UDC is that, in addition to the take-off deck and hangars for aircraft, there is tank hold over 1200 square meters. The ship is able to accept any military equipment, including main battle tanks, weighing up to 60 tons. Also on board the Trieste is a docking chamber measuring 50 by 15 meters. NATO’s standard landing facilities, including 4 LCU-type tank landing boats, or one large air-cushion landing boat, such as the American LCAC, can freely accommodate in the chamber. To work with various cargoes, the ship is equipped with cranes, as well as onboard and stern ramps.

To accommodate the aircraft carrier group on board there is a hangar 109 meters long and 21 meters wide. Inside the hangar there can be no more than 14-15 medium and heavy helicopters, or a mixed group. For example, 6 F-35B fighters and up to 9 AgustaWestland AW101 / NH90 / AgustaWestland AW129 helicopters, or 4 fighter and 10 specified helicopters. At the same time on the flight deck can accommodate up to 18-20 aircraft. And in total, a multi-purpose UDC can take on board (hangar and flight deck) up to 30-32 aircraft with the possibility of their real use, and not transportation from point A to point B. Two cargo elevators 15x15 meters with a maximum carrying capacity of 42 are lifted onto the flight deck tons. 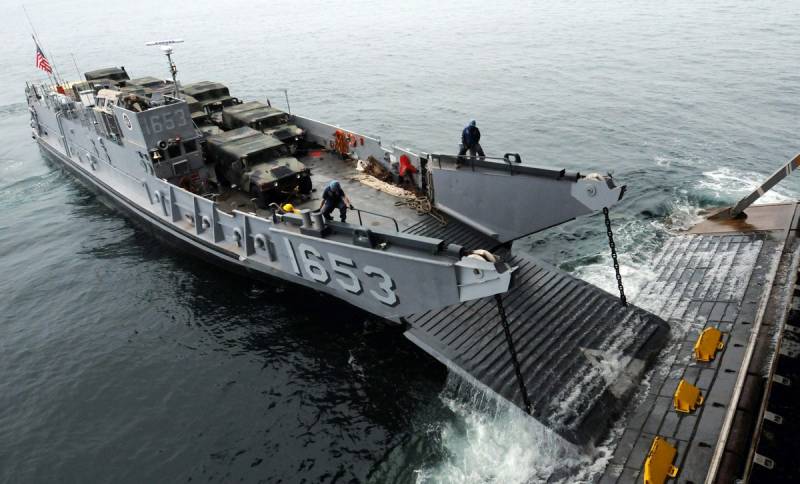 LCU tank landing boat
The heart of the ship is a combined power plant. The designers stopped at a twin-shaft diesel-gas turbine power plant, built according to the CODOG scheme. It includes two powerful MT30 gas turbines manufactured by Rolls-Royce with 48 500 hp each and two MAN 20V32 / 44CR diesel engines developing 15 000 horsepower. each, as well as two electromotors of low speed with a capacity of 5,2 MW. A power plant provides a multi-purpose UDC with a maximum speed of 25 nodes (46 km / h), an economic speed of 16 nodes, small (using electric motors) - 10 nodes. The declared range at a speed of 16 knots is 7000 nautical miles (almost 13 000 km). Autonomy of swimming - 30 days.

The complex of weapons placed on board also looks quite impressive. Unlike many competitors, both UDC and aircraft carriers, who primarily rely on protection from their own air group and security ships, Trieste can stand up for itself on its own. The armament of the ship includes 16 vertical Sylver A50 cells for deploying Aster 15 anti-aircraft guided missiles (short- and medium-range air defense system up to 30 km) or Aster 30 (long-range air defense system up to 120 km), it is also possible to deploy universal SAMM SAMs . The ship’s artillery armament is represented by three OTOBREDA 76 / 76 long-barreled 62-mm universal artillery systems, three Oto Melara 25 / 25 remote-controlled 80 mm artillery mounts with an Oerlikon KBA cannon chambered for 25x138MXXXNUM cartridges mm machine gun installations of the Leonardo company. On board the UDC there are also two Leonardo ODLS-12,7 jamming systems and other electronic warfare systems. A rich set of electronic weapons, presented by modern AFAR radars of X, C and L bands, deserves special mention, there is even the towed Leonardo Black Snake GAS on board, designed for additional anti-submarine protection of the ship.