The most useless warships 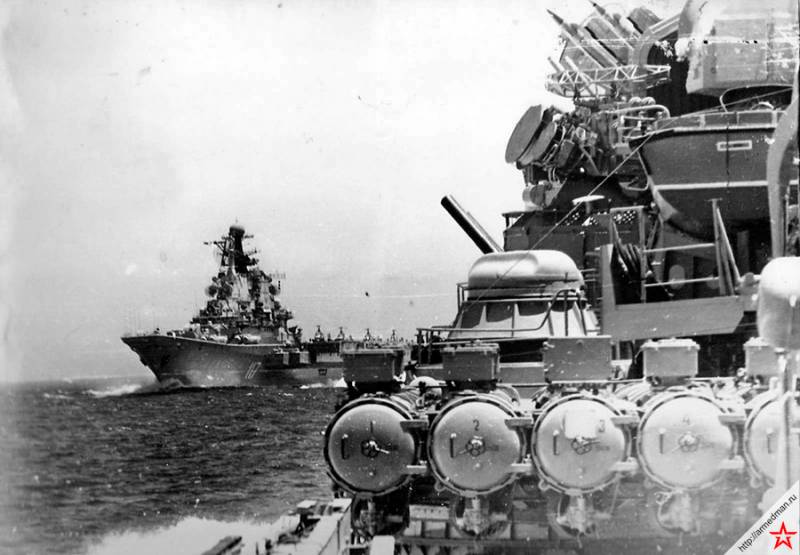 These ships are truly lucky. In a real combat situation they would have been “broken” to the fullest. The very first battle threatened them with heavy losses, not justified by anything other than the obstinacy of high ranks and the excess profits of the "effective managers" involved in the creation of these vessels. Whose decisions were dictated by any considerations other than enhancing combat effectiveness fleet.


And the enemy ... The enemy would have minted commemorative medals and celebrated victories. Of course, without mentioning the fact that the losers simply had inefficient ships.

But the battle check did not take place. Everyone gradually forgot about the shortcomings of those ships and were even proud of them.

Awkward and incapable, they displayed a flag in peacetime, after which they peacefully perished in a re-melting. Their heirs continue to sunbathe under the Californian sun, without worrying about anything in their careers.

The specific names of those who are guilty of creating vessels cannot be named. Ships - the fruit of the collective mind, which often took on strange forms.

Separate design teams worked on their narrow tasks, unaware of the overall progress of the project. As for the appearance and the concept of application, they were also chosen by more than one person. Any ship is a compromise in the struggle of interest groups, often holding completely opposite views on the tasks facing the fleet.

Inadequate terms of reference gave rise to problems associated with the need to combine fantasies with harsh reality. Another time, courage of ideas was ahead of the possibilities of technology. Innovation literally “devoured” the ship.

Somewhere too many “effective managers” have stolen. It is no secret that most projects born in peacetime have a single goal: to cut the defense budget.

But pretty philosophy. We are waiting for at least five not the best pages from stories navy. If a respected reader decides that five cases are not enough, he can always expand this list by adding his “nominees” to it.

Large cruisers such as Alaska

Alaska and the same type of Guam are real American veterans. Participants in the fighting in the Pacific. On a cloudy morning of April 1945, they, along with six battleships in the 10 community of aircraft carriers, boldly advanced to intercept the Yamato (with full confidence that the battle would end before the arrival of the linear forces).

The canonical description of Alaska among marinist historians was this phrase:

Too large and expensive to be used as cruisers and too weak and vulnerable to joint operations with battleships ... according to American experts themselves, they "were the most useless of the large ships built during the Second World War."
(Kofman VL Supercruiser 1939-1945. "Big cruisers" type "Alaska.") 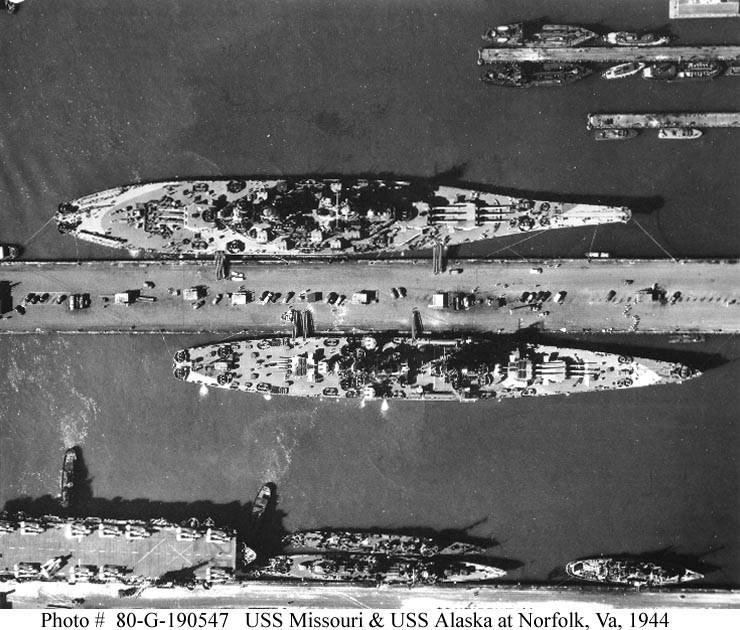 In addition to the indistinct application concept, super cruisers were built without attention to anti-torpedo protection - nonsense for the shipbuilding of the 1940's. The very first meeting with the submarine threatened Alaska and the two thousand sailors aboard it with a catastrophe similar to the death of Barham or the Japanese Congo.

Of the six planned cruisers, two were completed. On the third building, the admiral’s enthusiasm was completely exhausted, and the construction of the large (in Russian sources - linear) cruiser “Hawaii” was stopped at a degree of readiness of 80%. 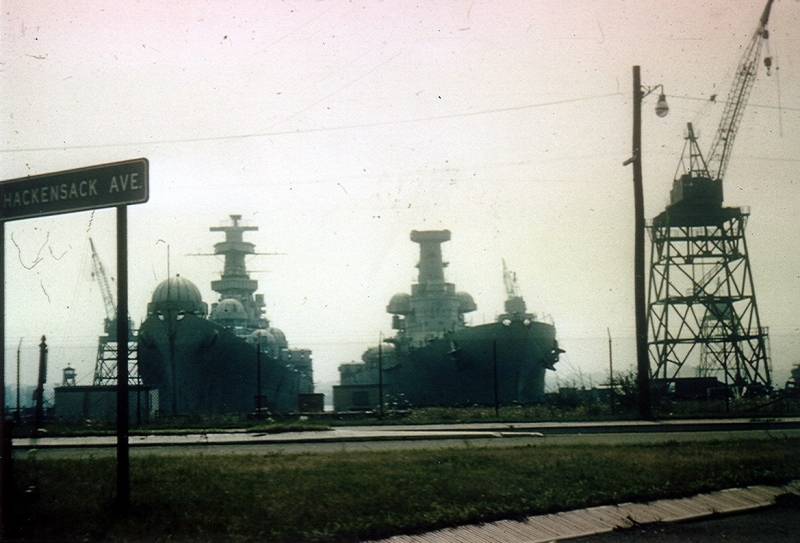 Alaska (left) and the Washington battleship awaiting a cut line
After a couple of years of aimless walking on the waters of the Pacific Ocean, Alaska and Guam were joked. The next dizzying step in their career was cutting for scrap.

It began with Tarava and continues to this day. UDC “Wasp”, “Makin Island” and the project with the proud name “America”.

Unarmed low-speed "barges" worth billions of dollars. Too expensive to operate in peacetime and completely useless in combat.

Only one side was interested in creating super-UDC. The shipyard in Pascagul, where this one was built, and all subsequent 45 000-ton hippos. 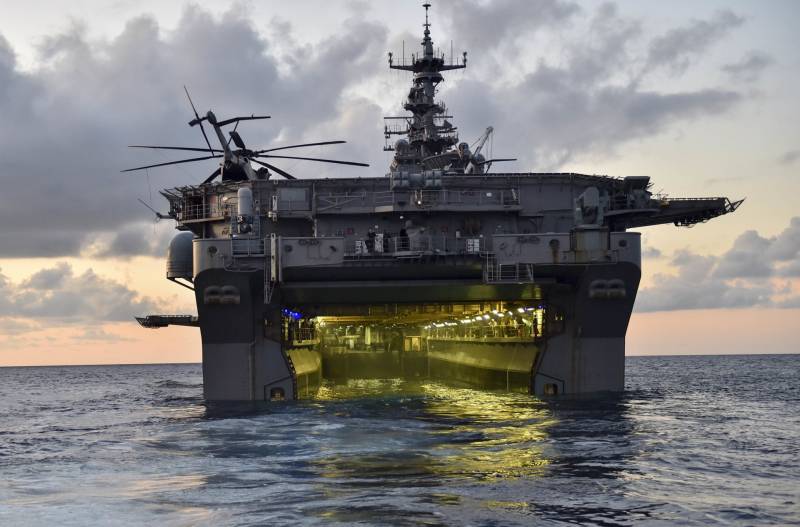 The shipyard is distinguished by enviable performance - to date, there have already been 15 landing helicopter carriers. And the value of recent contracts has crossed the line of 3 billion dollars per unit.

In practice, all transport tasks of the UDC are provided by a fleet of military transports, which larger and faster any "Tarawa", while also able to unload on the high seas.

Tactical helicopter landings are made from the decks of high-speed aircraft carriers of the Nimitz class (as was the case during Operation Eagle Claw).

In peacetime, more modest ships cope with the tasks of patrolling, including Helicopter carriers based on civilian tankers. Which is being built at the present time.

Unlike the Europeans, indulging in their Mistrals, the US Navy has a large fleet of nuclear aircraft carriers, against which the capabilities of the Uospa and Taravy air groups look simply awkward. 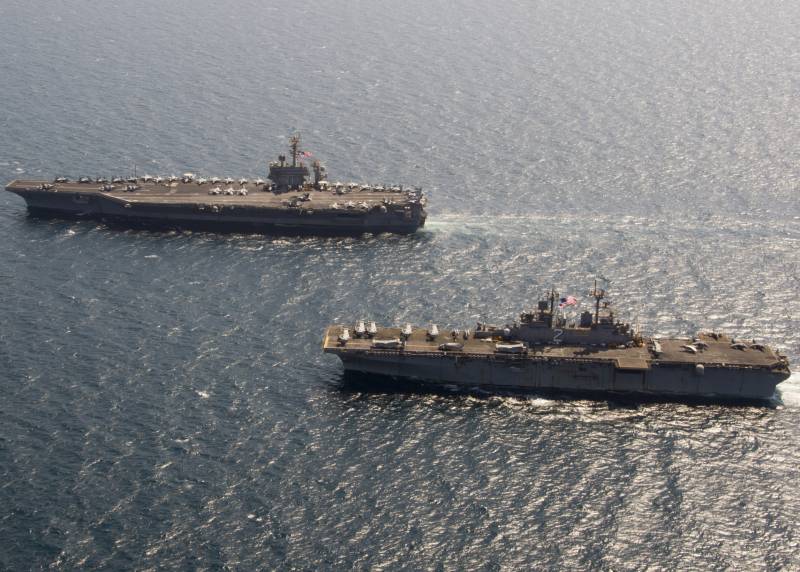 It is interesting that, despite the increased price tag, the new generation of UDC “America” completely lost the docking camera for landing boats, turning into a stub of a classic aircraft carrier without catapults, crawling at a speed of 20 knots.

Well, the main question - who wants to be on her deck in the war zone, under the fire of the "Bastions" and "Caliber"?

Compared with the American “Tarava”, its peer, TAKR “Kiev”, seems an undoubted triumph. His example shows how many combat systems can be placed on a ship with a displacement of 40 thousand tons! 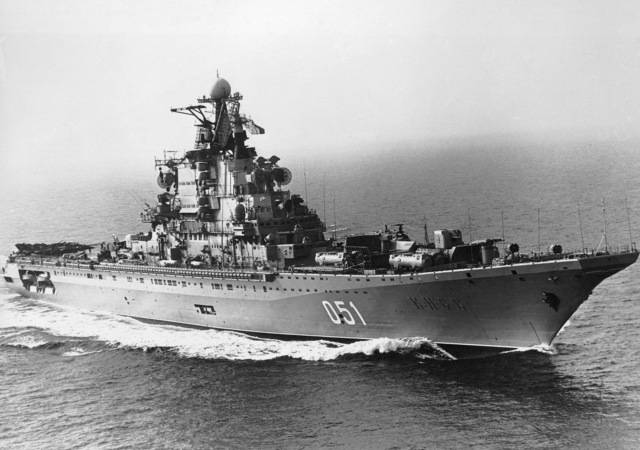 But this story has a flip side.

It is difficult to contain resentment by observing what the idea of ​​the Soviet aircraft carrier fleet in the 1970-80-e was.

8 anti-ship missiles - a salvo of one submarine, etc. 670M. All other armaments of the 40-thousand-ton TAKR corresponded to the 7-thousand-ton BOD.

Such giants should not be built in order to cross the arms of an anti-submarine ship and a submarine. 270 meters of length are required for the takeoff / run of jet aircraft with a take-off mass of tens of tons.

However, missile launchers and a bulky superstructure occupied half of the upper deck of the TAKR. In the remaining half, a handful of Yak-38 without a radar and a combat radius of 150 km crowded. 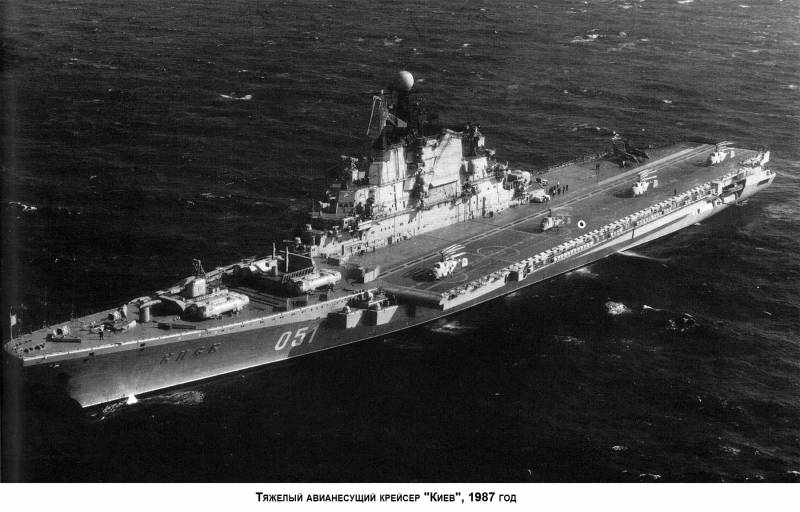 In the absence of any alternative, helicopters became the main active force of the air group. As such, the TAKRs traveled all over the world, depicting the Soviet aircraft carrier fleet. More vague questions were given vague explanations: "TAKR is not an aircraft carrier," "it has important anti-submarine missions," "there are few aircraft, but count the missiles."

The final result, despite all the technical splendor, never once met the plan for the appearance of aircraft carrier ships in the Soviet Navy. The last hopes of the supporters of this idea, who promoted the aircraft carrier’s design under the camouflage designation “TAKR”, were ultimately destroyed by supporters of the opposite point of view.

Who was ready to spend billions of rubles, and if necessary, to pay with thousands of other people's lives in order to justify their erroneous postulates and original ideas about the appearance of the fleet.

The creators of Zamvolt faced a difficult mission. Create a destroyer capable of surpassing the very successful Orly Burke project. 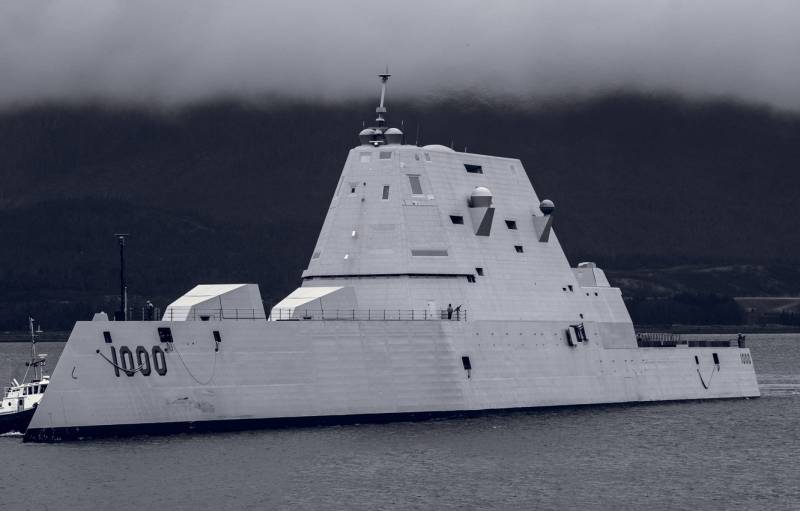 It turned out powerfully.

Six antennas of an all-seeing radar, from which neither a periscope flashed among the waves, nor a satellite at cosmic heights. Combined missile-cannon weapons. New layout. Instead of crowded sections of UVP - the placement of missiles around the perimeter of the deck, in mines with kick panels. Unprecedented visibility reduction measures. Increase in the overhaul life of mechanisms. Crew reduction.

Of all the promises, almost nothing has been achieved. The tactical and technical assignment of Zamvolt can be safely transferred to the science fiction library.

The creators of the cannons, who perverted the very idea of ​​naval artillery of the 21st century, were especially pleased. Instead of an auxiliary system, ready to bring down a shower of "blanks", invulnerable to any "Shell" and air defense systems, with a minimum reaction time and immunity to weather conditions, something surprising happened here. The artillery shot of Zamvolt was equal in cost to the launch of a cruise missile!

For such ships that have not gone into the series, there is a poetic nickname "White Fleet Elephants". But the three Zamvolta built are “lame elephants” who have not received even half of the combat systems envisaged by the project. And given the initial level of ambition, the Zamvolt project suffered a deafening fiasco.

There is not a single gram of sympathy in these lines. The hostile nation “failed” the program to create a new generation of destroyers. Seven feet above the keel. We wish partners to work in the same direction, increasing the degree of absurdity.

However, they can cope with this without our advice. 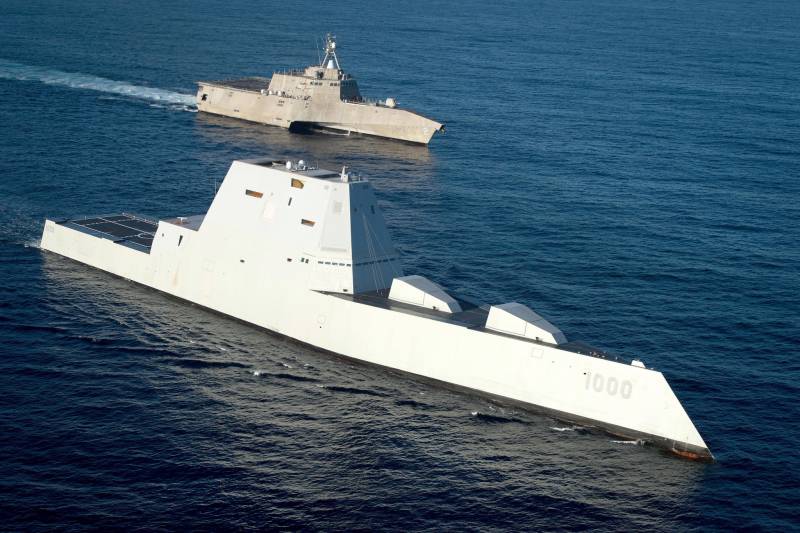 The fleet cannot consist only of cruisers and destroyers alone; for some tasks, ships of the third rank are needed. Instead of the usual watchtowers and corvettes, the LCS, an innovative coastal warship, was proposed. The speed looked a little strange - 50 knots, of great importance for a displacement ship of this size. But the rich have their own quirks ...

In reality, for half the cost of a missile destroyer, it turned out to be a “vessel”, in which, instead of Aegis, a MANPADS, and a machine gun from shock weapons. The modular concept did not materialize. Firstly, the time taken to replace the modules. Secondly, the very availability of the right models. Finally, quick-detachable equipment is inferior in capabilities to complete systems. 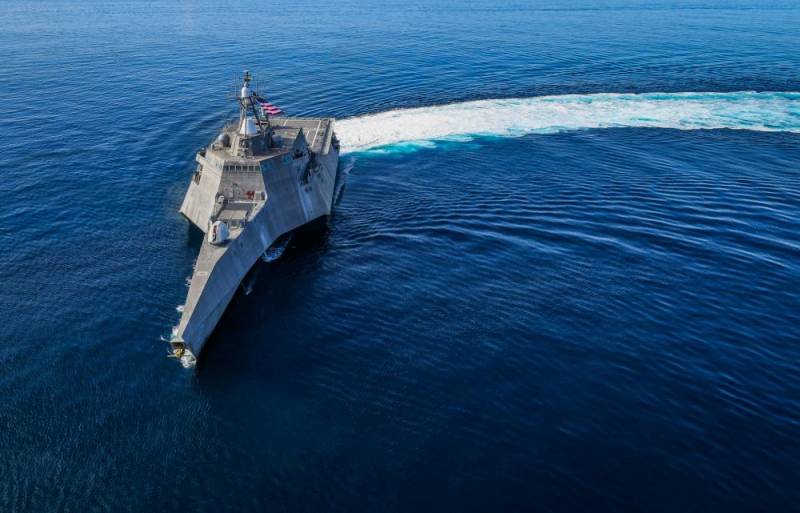 The creators of LCS continue to insist on "special tasks in the coastal zone", but the sailors have a simpler opinion. With the funds spent on creating the LCS, it was easier to build a dozen Orly Berkov corps with a reduced armament. Full-fledged combat units would have turned out, in contrast to the “littoral ship”, which is not capable of withstanding even the simplest threats.

Anti-rating is not limited to the presented examples.

Here could be, for example, artillery submarines. French "Surkuf" and a series of Soviet squadron submarines of the type "Pravda". Absolutely crazy ideas, embodied in metal, contrary to all the arguments of skeptics.

The creators of Surkuf and Pravda did not seem to notice that the submarine, due to its specific contours, layout, and less buoyancy, was categorically incapable of operating in the same formation with destroyers and other surface ships. A submarine from such a “diving destroyer” will also turn out to be dubious.

Which was confirmed in practice.

In a later era, the Americans distinguished themselves by building “very large light cruisers” of the “Worcester” type with automatic 152-mm “anti-aircraft guns”. At a time when the danger from high-altitude bombers was recognized as practically zero, and completely different caliber and rate of fire were required to ensure ship's air defense.

Nowadays, the Germans are weird with their frigate F125 Baden-Württemberg. A huge, empty and slow-moving box with a displacement of 7000 tons, bearing almost no less weaponsthan the Russian RTO Karakurt (800 tons).

As you can see, the number of inadequate and meaningless projects will increase steadily over time. A direct consequence of the fact that 40 of the most developed economies in the world have not fought each other for 70 years. In such circumstances, priority is given to profits from the implementation of a project in the field of military shipbuilding. Be sure, we will see many more paradoxical and not too useful constructions. 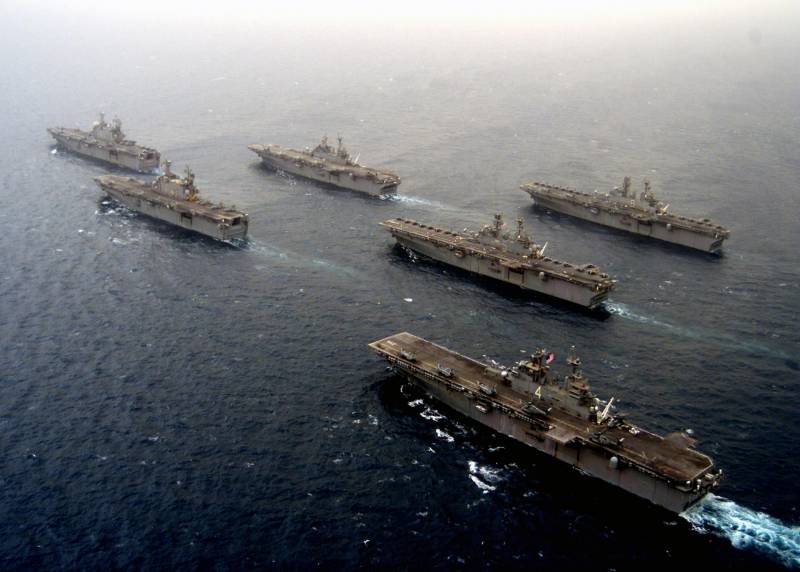