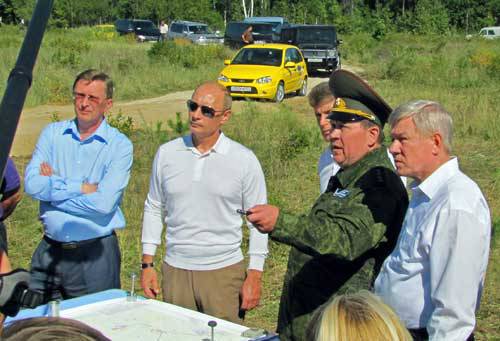 In September 2009, the President of the Russian Federation Dmitry Medvedev signed a decree on the appointment of the Federal Agency for Special Construction (Spetsstroy of Russia) as the lead organization for the creation of the Russian National Cosmodrome in the Amur Region.

According to the director of Spetsstroy Army General Nikolai Abroskin, more than 700 objects will have to be erected in 400 square kilometers, including two launch complexes for medium-class missiles of increased payload, assembly and testing facilities, oxygen-nitrogen and hydrogen plants, a universal aerodrome complex . It is also necessary to prepare an external power supply system, to lay the internal roads of the cosmodrome, railways and other communications.

The birth of a new domestic space harbor will pass through three stages. The first one, which includes design and survey work, is at the stage of completion and coordination. The second stage (2011-2015) is the longest, since it envisages the creation of a developed material and industrial base, which will allow the construction and commissioning of the facilities of the first turn of the cosmodrome, providing preparation and launching of space vehicles for various purposes. The last stage should be completed by 2018 year, then the first launches of manned spacecraft of the new generation are expected.

This will be a fundamentally new and environmentally safe cosmodrome, it is planned to produce environmentally friendly fuel for spacecraft. Thanks to the use of modern technologies in both construction and other industries, the East will be smaller and more compact than the Plesetsk cosmodrome in size, but in terms of efficiency it will not yield to the best space harbors in the world.

No one doubts that there will be a new cosmodrome and this is an irreversible process. The first funds for the start of full-scale construction in the amount of 24,7 billion rubles allocated. The country's leadership pays special attention to this issue, which was confirmed by the recent visit of Russian Prime Minister Vladimir Putin to the Amur Region, where he visited the geological survey site and familiarized himself with the Vostochny mockup, and also personally opened a memorial stele with the inscription: ".

“We laid a new Russian cosmodrome in the Amur Region, for which we will allocate significant resources,” the Russian prime minister said.

There is no doubt that the implementation of such a large-scale project will make a significant contribution to the socio-economic modernization of both the Amur Region and the entire Far East. Of course, the Baikal region will not remain aloof from this process. The construction industry, mechanical engineering, new jobs will be activated.

With the opening of the East, Russia will have a self-sufficient and developed space infrastructure capable of launching missiles of any complexity. In turn, this will make it possible to abandon the use of cosmodromes located on the territory of other states. After all, we still launch the lion's share of heavy vehicles from Baikonur, which is leased from Kazakhstan.

It is with Eastern Russia that the further exploration of near-Earth space, the study of the Universe, are connected. From there, spacecraft will go to geostationary orbits and to distant planets. In 2015, it is planned to launch the first spacecraft, which will open up new opportunities for space exploration. In the Amur region is already preparing specialists for the future of the spaceport.

East will arise on the basis of the Free Spaceport disbanded in 2007 year. During the construction, it is planned to use some of the existing facilities: communication facilities, highways, railways, residential buildings, etc. All of them will be restored and modernized to meet new requirements.

The project also provides for the reconstruction and construction of social infrastructure facilities in the village of Uglegorsk, which is the administrative center of the Vostochny cosmodrome, therefore, it is included in the list of closed administrative and territorial entities of the Russian Federation. The cosmodrome specialists and their families will live in the village. It is on their shoulders that the responsibility for the formation of a new space harbor of the country will fall.

The seriousness of the intentions of the government towards the East is evidenced by the development of another project, in the course of which, in a few years, the same Uglegorsk could turn into one of the largest settlements of the Amur Region with a population of over 30 thousand people. Large-scale construction is planned to be deployed through 1,5-2 of the year at the expense of funds from the federal budget, and from 2013-th already begin to hand over the first objects.

In terms of its scale and financial costs, the Eastern promises to be the construction site of the century and its role in the development of the country, outer space and this region will be difficult to overestimate. The construction of the cosmodrome itself and all the necessary social infrastructure will cost the state treasury approximately 380 billion rubles. Over 17 thousands of people will work at the cosmodrome, each of whom must live in decent social conditions.

“Spetsstroy of Russia has considerable experience in the construction of objects for various purposes,” the press service of the department noted, “including in the space industry.” In 90, the special forces deployed the social infrastructure of the Baikonur cosmodrome, and today they are building a number of important facilities as part of the modernization of the main Russian cosmodrome Plesetsk in the Arkhangelsk region. At the moment, the agency's specialists are working on the reconstruction of the launch and technical complexes "Soyuz-2" and the construction of the universal launch complex "Angara".