The legend of the US Marine Corps. Lewis "Honors" Puller: from privates to generals 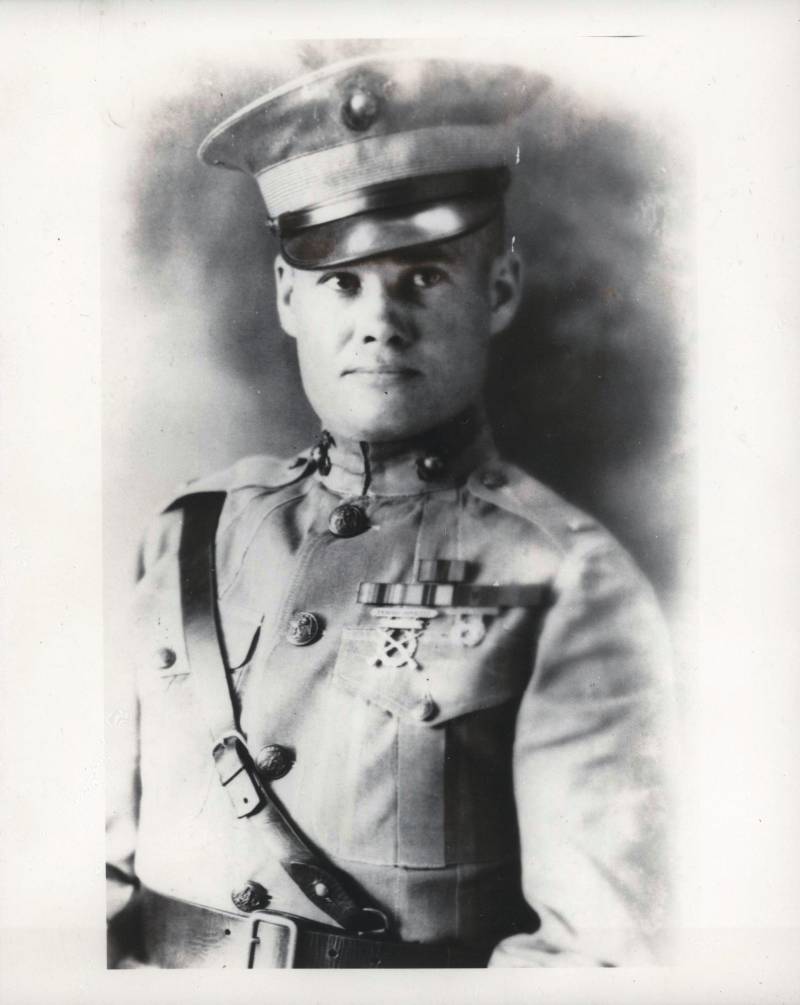 The Marine Corps regularly participated and is participating in various wars, and its personnel constantly receive awards. The winner of the highest number of awards in the ILC is still Lewis Barwell "Honor" Puller. For several decades of service, in which major wars fell, he went from a private to a lieutenant general and earned all the main military awards of the United States.

The future hero of several wars was born 26 on June 1898 in West Point (Virginia) in the family of a grocer. From childhood, he listened to stories of Civil War veterans and eventually began to dream of a military career. His idol was General Thomas Jackson.

L. Puller made his first attempt to serve in 1916, during the Border War with Mexico. However, his mother did not allow him to join the army, and at a recruiting center they refused him because of his insufficient age. However, the future general did not give up trying to get into the service. In 1917, he entered the Virginia Military Institute, where he studied for about a year. 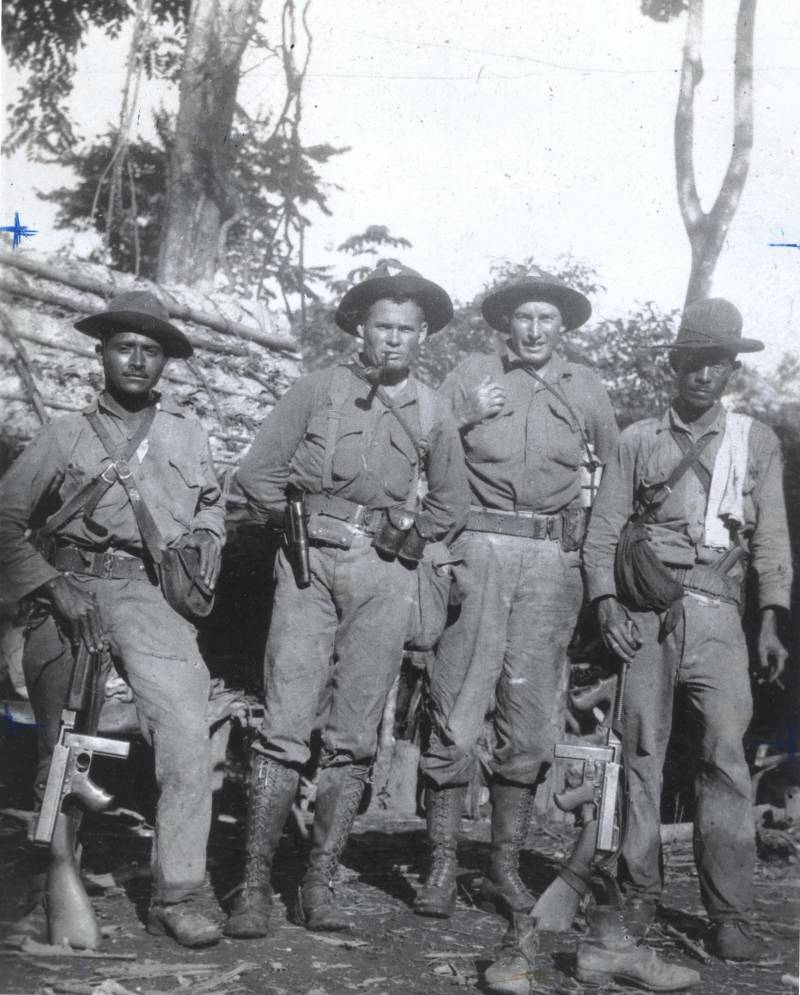 Nicaragua, 1931 Mr. L. Puller second left
In August 1918, Mr. Puller dropped out of school and went privately to the ILC - he wanted to get to the front faster. However, he did not succeed. The First World War ended before L. Puller's unit prepared for service. Despite the end of the war, the private enrolled in the School of Non-Commissioned Officers, and then moved to the School of Candidates of Officers at Quantico Base. In June 1919, Mr. L. Puller became the second lieutenant of the reserve.

Exactly 10 days after this, the second lieutenant received the rank of corporal, but did not enter the active service. In connection with the end of the war, the reduction of the ILC began, and Puller found no place in the new structure.

However, the corporal did not have to return to civilian life. He was transferred to Haiti to serve as a lieutenant in the local Gendarmerie, who worked in collaboration with a US expeditionary force. At that time the so-called Banana Wars, and American troops were active in several Latin American countries. 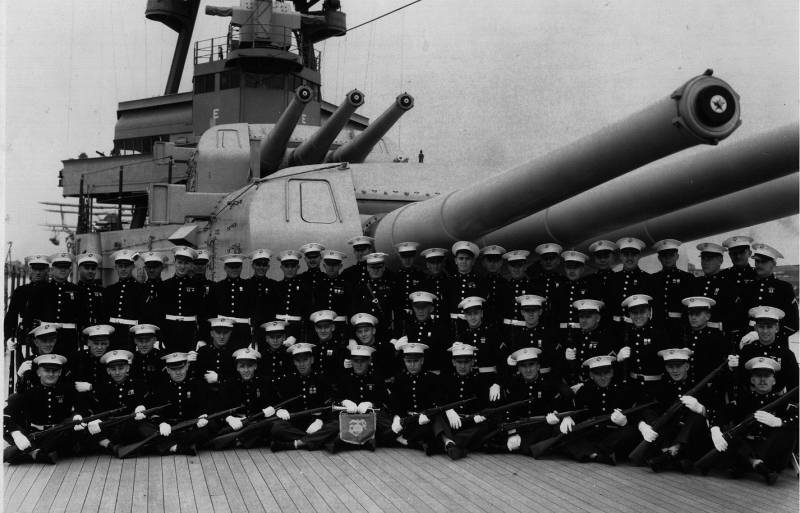 Marines led by L. Puller on the deck of the cruiser USS Augusta, 1940
Service in Haiti continued until 1924, after which some of the officers and soldiers were returned home. For several years, L. Puller took part in the 40 battles with local armed forces fighting for independence. In parallel, he tried to recover in the rank of second lieutenant of the ILC - but to no avail.

In March, 1924-th L. Puller was returned to active service in the ILC with the rank of 2-th lieutenant. In the new rank he was sent to serve in Norfolk. Then the young officer was transferred to Quantico (first to the School, then to the artillery regiment), from there to Pearl Harbor, and then to San Diego. Thus, in less than four years, the officer changed five duty stations.

At the end of 1928, Lieutenant Puller was sent to Nicaragua to serve in the occupying National Guard. He again had to fight a real adversary, and successes in this matter were noted by the command. For five difficult battles in February-August 1930, L. Puller received the Naval Cross - the first such award. 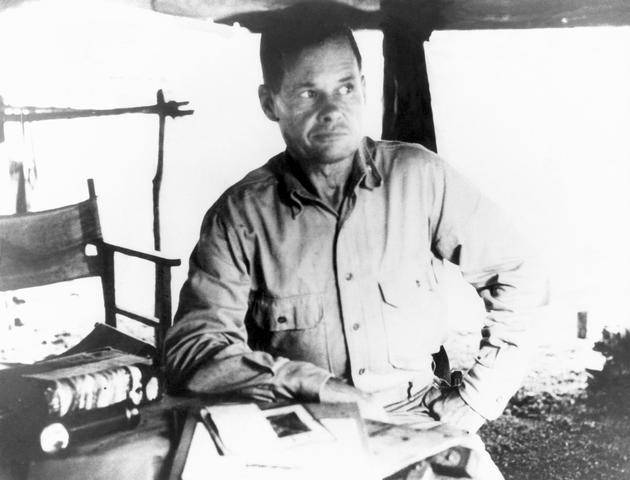 1942 year, Guadalcanal
In the middle of the 1931, Mr. L. Puller was transferred to Fort Benning base for the course of company officers. In September 1932, he returned to Nicaragua, where the war was nearing completion. Puller participated in several battles, including at El Sos - the last major fight with the Sandinists. At the beginning of 1933, the American contingent left Nicaragua.

Immediately after this, Puller received a new appointment. He was sent to China to command the part of the ILC responsible for guarding the diplomatic mission in Beijing. He then commanded the marines aboard the cruiser USS Augusta (CL-31), commanded by the future admiral Chester Nimitz. Service in China lasted until mid-1936. 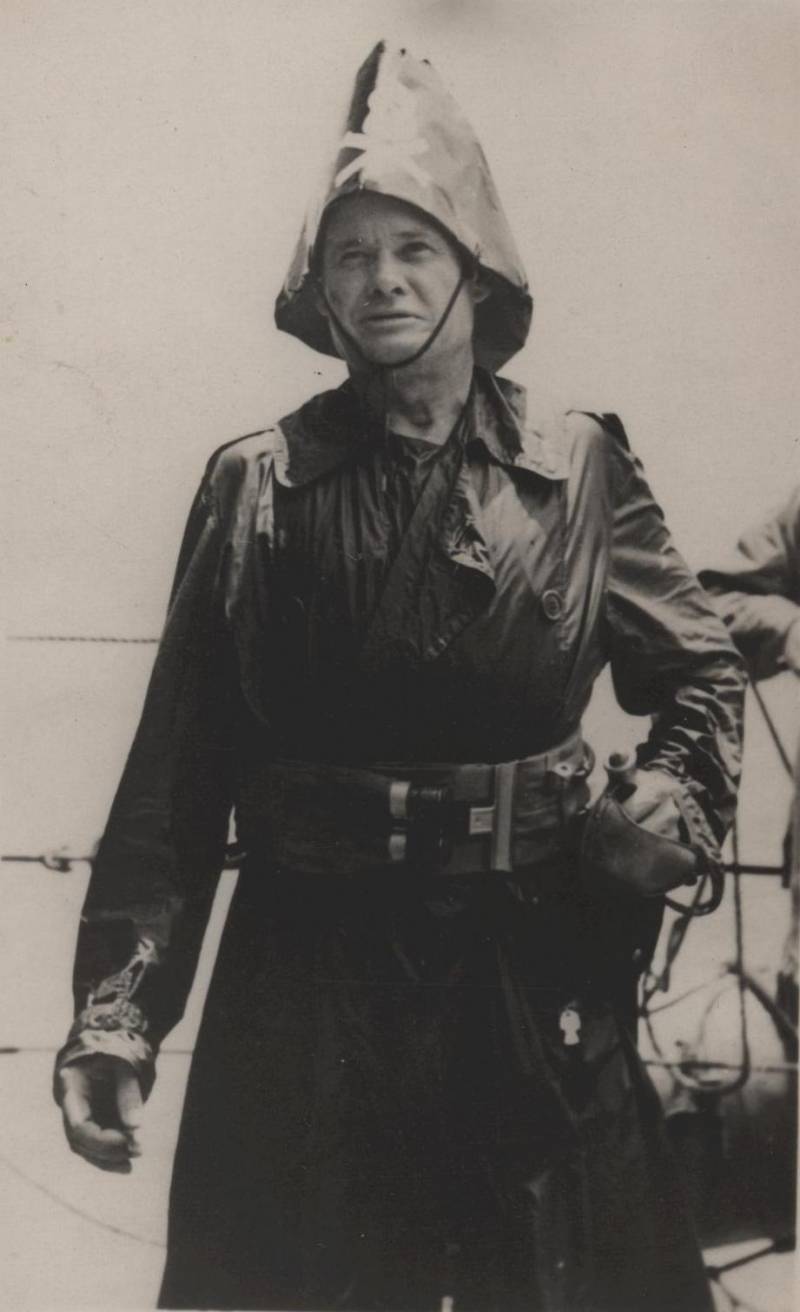 Cause time - fun hour. Colonel Puller at the Feast of Neptune
After that, L. Puller headed the training unit of the ILC in Philadelphia, and in 1939 he was returned aboard the Augusta. A few months later the officer became the commander of the 2 battalion of the 4-th Marine Regiment, and in the autumn of the 1941-th received the rank of major and became commander of the 1-Battalion of the 7-th regiment.

With the outbreak of World War II, the 7 Marine Brigade was formed on the basis of the 3 Regiment. In May 1942, she arrived in Samoa to organize defense. In autumn, the brigade retreated to about. Guadalcanal. During these battles, the major, and then Lt. Col. Puller, showed his skills as a commander, organizing the defense, and then the evacuation of personnel in a massive attack by the enemy. In addition, several interesting stories about the personal qualities of an officer belong to this period. 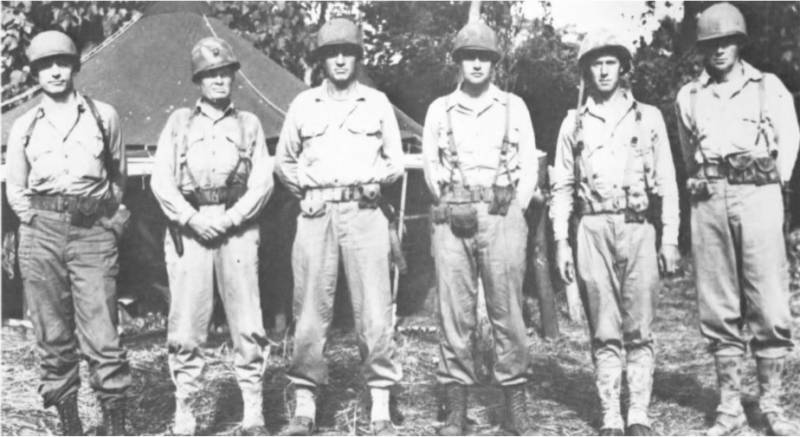 Commanders of the 7 Regiment of the Marine Corps, 31 January 1944
So, they said that during one of the Japanese shelling, Puller arranged shelter for the soldiers, but he remained calm, did not hide and smoked calmly in the trench. In another battle, the marines were surrounded, but the lieutenant colonel encouraged them: "the enemy from all sides - this time he can not get away from us." For fights on Guadalcanal L. Puller was awarded the third Naval Cross.

Later, the 7th regiment was transferred to about. New Guinea, where the battalion commander was again able to show his skills. At the turn of 1943-44. Serious battles took place on the island, as a result of which Puller received the fourth Naval Cross, and then the rank of colonel and the post of commander of the 1 Regiment of the ILC.

A few months later, the 1 Regiment participated in the battle for Peleliu. Despite the high losses, the regiment solved the assigned tasks - until the command of the ILC ordered it to move to the rear for restoration and replenishment. According to the results of this operation, the personnel of the 1 regiment received many awards. The regiment commander was introduced to the first order of the Legion of Honor. 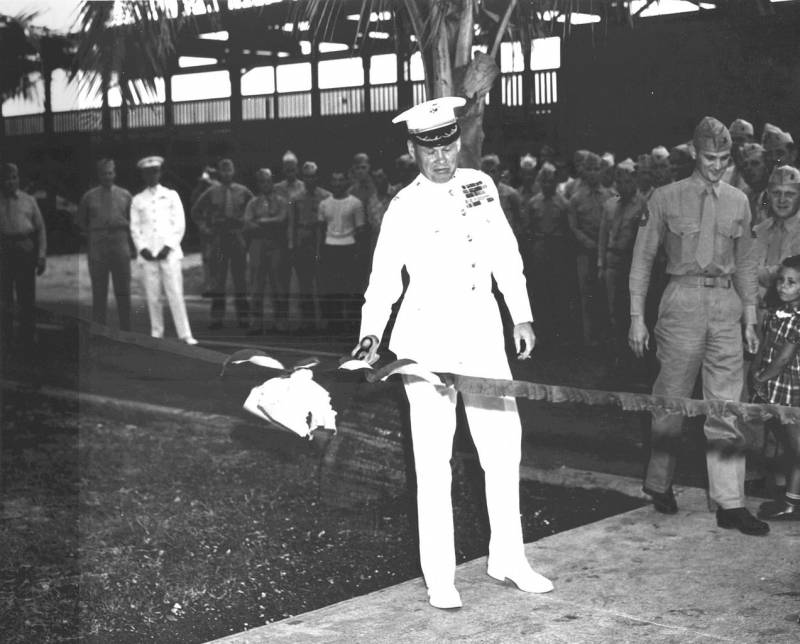 1946 gala events at Pearl Harbor
In November, Colonel Puller was transferred to the Camp Regent base camp in the United States. Two weeks later he became commander of the regiment and held this position until the end of the war. Soon after the victory over Japan, new orders for appointments appeared.

The war in Korea

Almost immediately after the outbreak of the Korean War, L. Puller was returned to the post of commander of the 1 Marine Regiment. 15 September 1950 g. The regiment landed in Incheon and went into battle. For further battles, Puller received the second Legion of Honor order. In early December, a defeat occurred at the Chosinsky reservoir. The Marines were not able to defeat the enemy, but they stayed well and managed to evacuate with moderate losses. For heroism and professionalism during this operation, Puller received the fifth Naval Cross.

At the beginning of 1951, Colonel Puller became a brigadier general and ended up at the headquarters of the 1 Marine Division. In February-March, he had to temporarily take over command of this formation, and then move to the position of deputy commander. 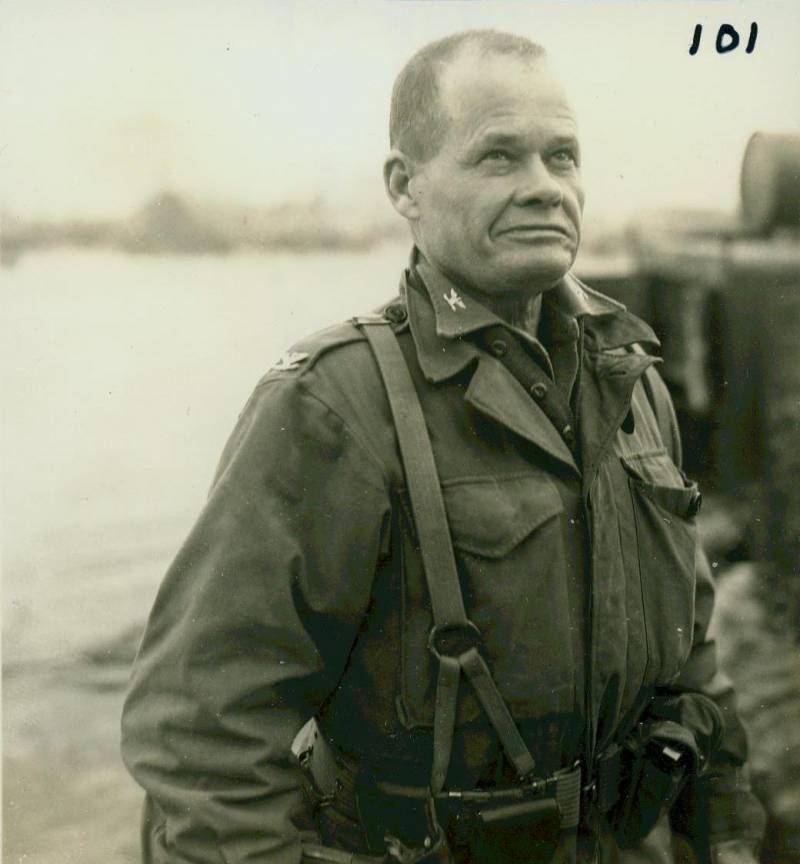 General Puller in Korea, November 1950
In May of the same year, General Puller was transferred to California and appointed commander of the 3 Marine Division. He then led the ILC Pacific Command Center. The general never returned to Korea.

In 1953, Mr L. Puller was promoted to Major General while retaining the position of Chief of Troop Training Unit Pacific. A year later, he again had to take command of the division, and at the beginning of 1955, he became deputy head of the Camp Ledge base.

A few months later, the hero of several wars suffered a stroke. On November 1, he resigned, receiving his last promotion to lieutenant general. 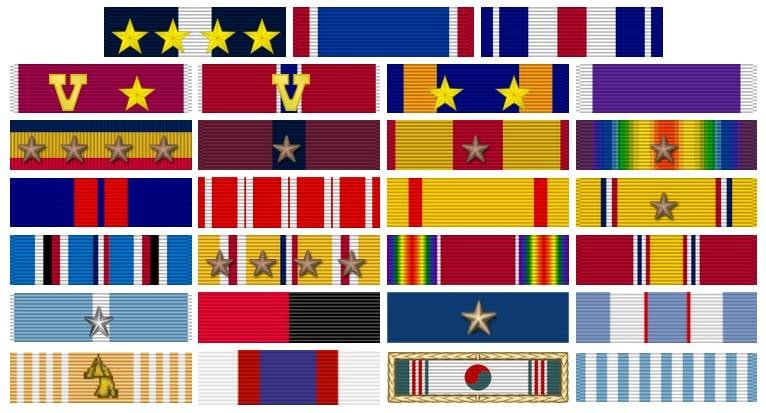 Awards L.B. Puller for 37 years of service
After the resignation, General Puller and his family settled in the city of Saluda, where he spent his last years. His son Lewis also became an officer of the ILC. He participated in the war in Vietnam and returned home disabled.

Lieutenant General Lewis Barwell Puller passed away on October 11 on October 1971 at the age of 73. He was buried in the cemetery at Christ Church next to his wife.

During his lifetime, L. Puller became an integral part of the US Marine Corps folklore. In this role, it symbolizes the spirit of the ILC. This perception of the officer and general is directly related to his personal and professional qualities - courage in battle, skills in command and a kind of humor. Puller was also remembered for his benevolent, but demanding attitude towards the personnel. 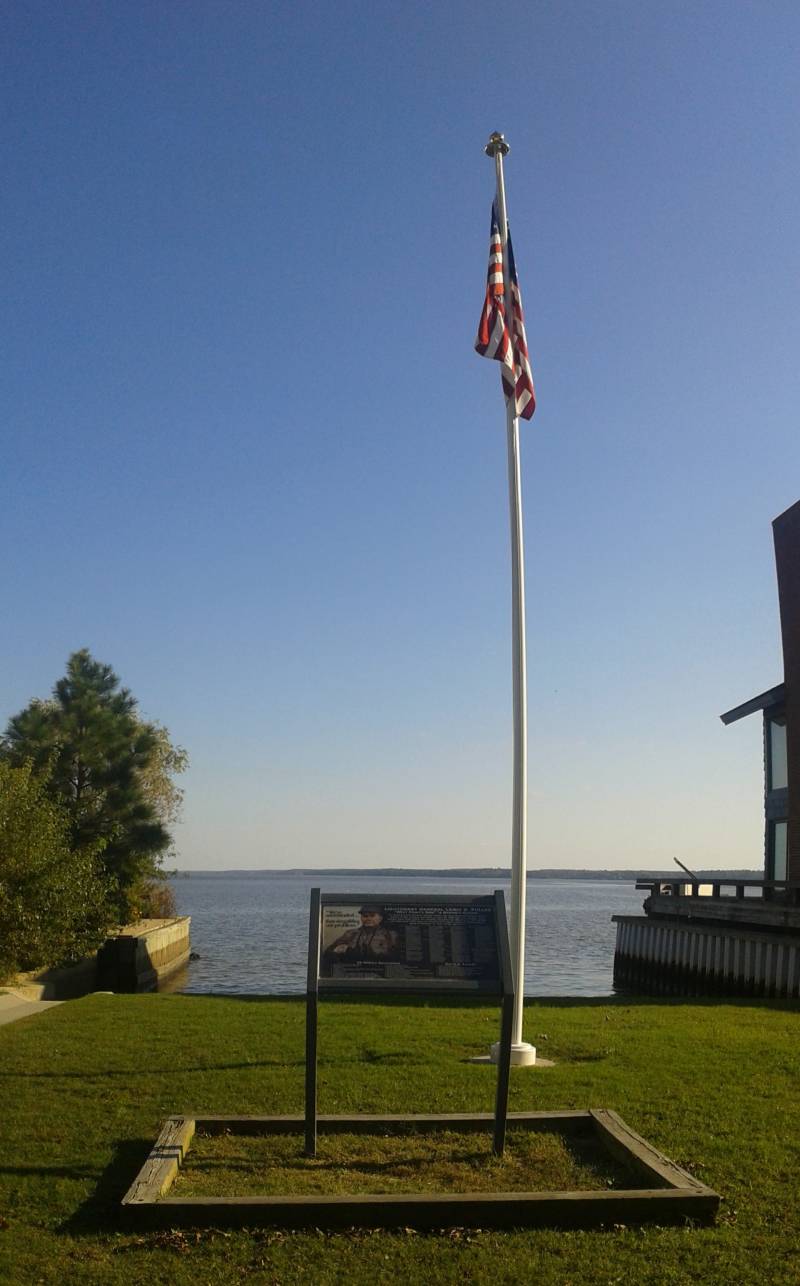 West Point Memorial
The ILC still retells various stories about L. Puller, both real and probably fictional. At the same time, he is called “Honor,” whose origin is also very interesting. According to legend, during the Banana Wars, Puller was seriously injured, his chest was removed and replaced with a steel prosthesis - hence the nickname "Busty". Another version refers to a loud command voice that drowned out the noises of battles.

However, Puller himself learned about such a nickname only shortly before his resignation. At the same time, as he claimed, during the time of service he really had different nicknames - but the Honors were not called.

As often happens, the folklore image of a legendary person can seriously differ from a real person. However, it is based on real facts - Lewis Puller has come a long way and from ordinary to general, took part in several wars and always showed courage, which was noted by many awards. That is why he is still considered a real symbol of the ILC and an example to follow.