Western propaganda during the Caucasian war. Old tradition of defamation 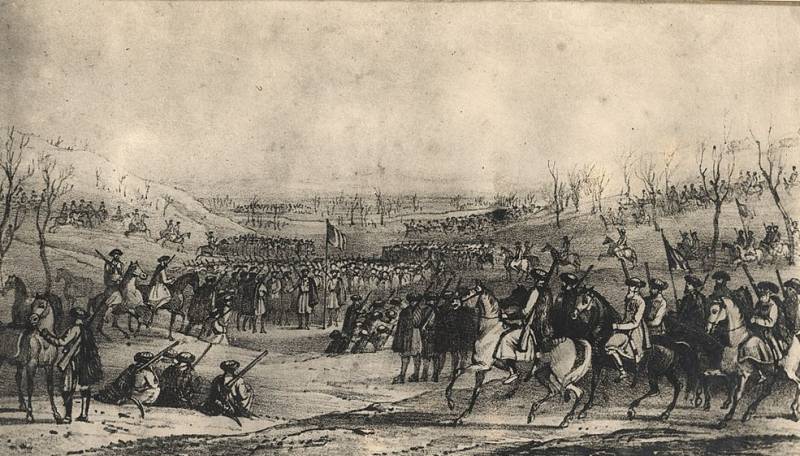 The tears of the girl Bana, the ubiquitous armored Buryats, the holy cow of the “White Helmets”, Russian hackers, poisoners of the outgoing Skripals, Russian special forces in Norway and so on. All these are simple details of the modern information war, woven from the so-called fakes and shifting emphasis. Moreover, the avalanche-like flow of this lie within the framework of propaganda causes a dual reaction in society. Some people do not notice propaganda behind the turbulent information flow - it doesn’t matter, for personal gain or because of myopia. Others loudly declare that the planet did not know such a heat of the info-war.

Neither one nor the other is right. The information war is as old as the world. And its intensity is associated only with the development of technical means of delivery of lies and the number of channels through which it passes. In the midst of the Caucasian war of the 19th century, Europe fought in the information field no less low, dirty and actively than now.


Any conflict accumulates around itself a lot of people of very different qualities. And conflicts with the presence of national, religious, and in the case of the Caucasus, where the interests of Russia, Persia and Porta clashed, even civilizational confrontation, are simply black earth for all kinds of adventurers, seekers of glory and just rogues.

In the Caucasus, there was no shortage of provocateurs and seekers of cheap fame. One of the most famous was probably James Stanislav Bell. A provocation with the schooner Vixen made his name well-known (the author has already described this incident). James was born into a wealthy Scottish family of bankers and at first held as a middle-aged businessman. Bell had never received any military education, or even formally served in the public service. But his penchant for thrills, weighed down by the lack of the need to seek a livelihood, led him to the ranks of scouts and provocateurs of Her Majesty. 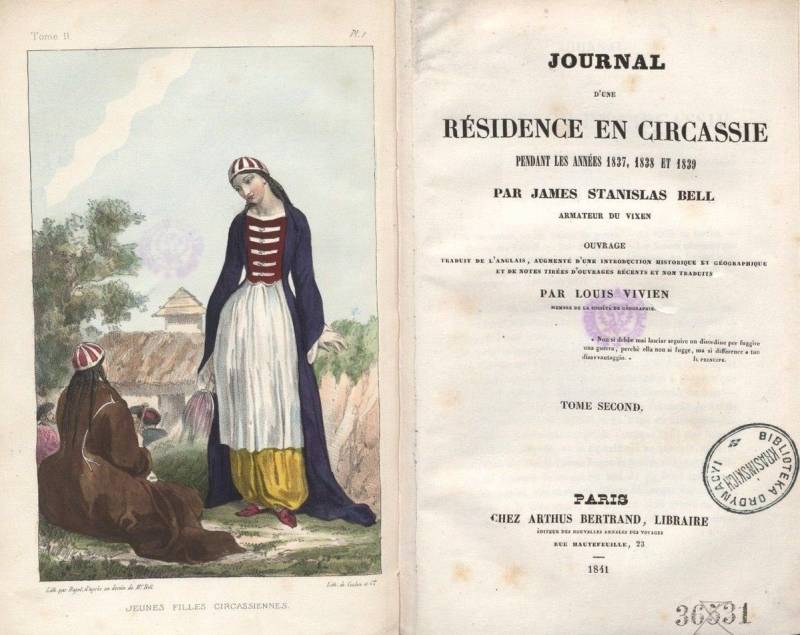 There is essentially no information about Bell’s brave fighting activity. But as a provocateur, James worked notably. Immediately after the collapse of the provocation with Vicksen, official London disowned Bell. But he managed to return home. And he again came in handy for the crown. In just less than a year, James had sprinkled a whole book of memoirs entitled "Diary of a stay in Circassia during the 1837, 1838 and 1839 years." The book with rich illustrations was published already in 1840. In it, Bell smoothed out all the sharp corners of the Circassian reality in the form of the slave trade, internecine wars and other things. But he was desperately exposing Russia.

Another noteworthy provocateur of that period was Teofil Lapinsky, born in the family of the Polish deputy of the Galician Sejm. Theophilus was a patented xenophobe based on the “Turanian theory”, i.e. racial theory, which claimed that the Russians are not only not Slavs, but also not Europeans. From youth, Lapinsky wandered from camp to camp, guided by hatred of Russia. Alexander Herzen characterized Theophilus this way:
“He had no firm political convictions. He could go with white and red, with clean and dirty; Belonging by birth to the Galician gentry, by education - to the Austrian army, he was very drawn to Vienna. He hated Russia and everything Russian wildly, insanely incorrigible. ”

And here is the characteristic of Lapinsky, given to him by his comrade-in-arms on the fight in one of the military expeditions, Vladislav Martsinkovsky:
“The colonel drinks Bordeaux wine, but leaves us hungry. He solders women and eats gourmet dishes for the money of the unfortunate Poles. How could such a man lead an expedition in which so much attention to things, it would seem, is insignificant? "He is whining at a time when his subordinates suffer hunger and thirst on a ship full of insects." 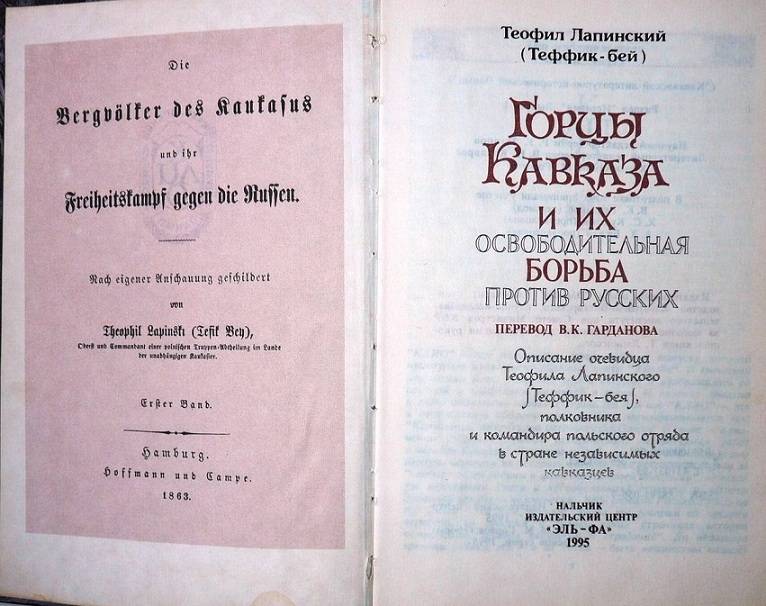 Naturally, from time to time this “commander” was so tired of his surroundings with his behavior that he had to flee to Europe in order to grind his reputation. And as with Bell, he was greeted with open arms. After the plan of British intervention of the Caucasus proposed by him was rejected by the British Prime Minister, he wrote the book “Highlanders of the Caucasus and their war of liberation against the Russians” literally in a year and managed to publish it instantly. Of course, he kept silent about his plans for intervention, but he thoroughly approved Russia as the "occupier." As a result, Lapinsky devoted all recent years to campaigning and writing memoirs.

One of the leading provocateurs and heralds of the anti-Russian side in the Caucasus, in my humble opinion, is David Urquhart. The British diplomat with an adventurous streak already in the 30-ies began the real anti-Russian PR campaign in the British media, directed against the approval of Russia in the Black Sea. The campaign was so successful that in the 1833 year he entered the trade mission in the Ottoman Empire. In a new place, he not only became the best "friend" of the Turks, but also continued his propaganda activities, interrupted by the publication of a rather disgusting pamphlet, "England, France, Russia and Turkey." His opus even forced London to withdraw Urquhart from his post. 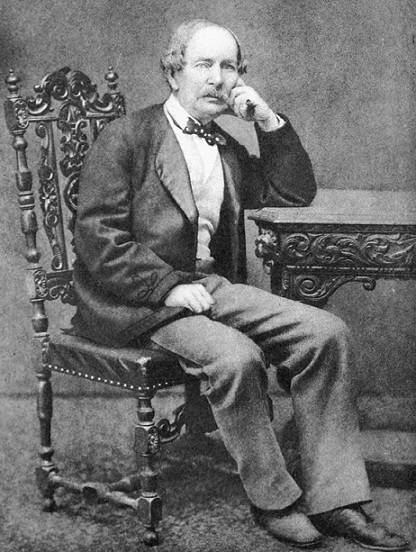 David Urquhart
In the 1835 year, David founded an entire newspaper called Portfolio, in the first issue of which he published a series of government documents to which he had access, with the necessary comments. When he was returned to Constantinople, for two years he inflated such an anti-Russian information scandal that he had to be recalled again. As a result, he devoted his whole life to anti-Russian propaganda, became a peculiar forerunner of Goebbels, and even was the author of the flag of Circassia. Yes, the idea of ​​that very green banner does not belong to the Circassians.

And now let's start bare empiricism. One of the lesser known PR managers of the 19 century in the Caucasus is Edmund Spencer. In the 1830-ies this English official made a trip to Circassia. Moreover, all this time he was pretending to be an Italian doctor, exploiting the neutral image of the still Genoese merchants of the Middle Ages. Upon arrival in his native Britain, Edmund instantly published a book entitled "Description of trips to Circassia."

For an illustrative example, the author decided to give a few excerpts from the description by Spencer Sujuk-Kale:
“The fortress of Sujuk-Kale was undoubtedly very ancient ... The Turks in modern days have added a lot to their structure, it is absolutely obvious due to the large number of glazed blue, green and white bricks ...
These ruins are now to some extent dangerous for the lover of antiquity exploring them due to the large number of snakes and myriads of tarantulas and other poisonous reptiles ...
Leaving the ruins of the formerly majestic castle of Sujuk Kale, I traveled around a large bay and an adjacent valley. It is impossible to imagine a more sad picture ... And such was the ruin committed by the Russian soldier.
A sparkling camp, a joyful crowd of beautiful young men with whom I talked some months ago, the sounds of noisy fun and joy - all this melted away like a ghost. ” 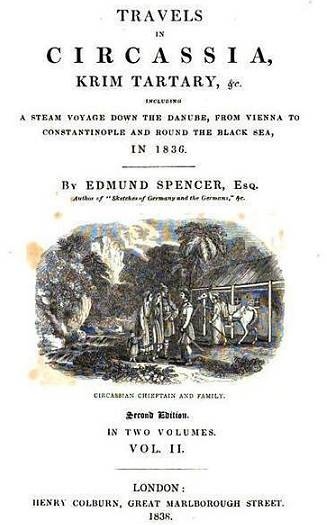 To begin with, we forget that all these artistically decorated humanistic sorrows were written by an official in Britain, a country whose colonialism has wiped out millions of people over several centuries. Also, let us leave his dismissive naming of Russian soldiers (“soldier”), this is still a mild example of his historical vocabulary. Cossacks, for example, he often refers to as "drunkards." Weigh the dry data.

Firstly, the antiquity of Sujuk-Kale immediately begins to limp. This Turkish outpost was built at the beginning of the 18 century, i.e. one hundred years before the visit of the author. Attempts to assert that the fortress was erected on the remains are only partly true, since the use of broken stone is hardly a sign of heredity.

Secondly, the intentional artistic thickening of paints with snakes and myriads of tarantulas does not have objective biological soil. No myriads of tarantulas to the Novorossiysk spawn did not bother. The most nasty insects in the area are flying reptiles that spread malaria and live in the floodplains. As for snakes, in total, no more than five poisonous snakes live on the Caucasus coast, one of which does not go down from the mountains below 2000 meters. All of them are extremely rare, but only the steppe viper inhabits the area of ​​Novorossiysk directly from the venomous snakes. At the same time, due to philistine fear and banal illiteracy, the average citizen has already contributed to the genocide of innocuous snakes and legless lizards.

Thirdly, Sujuk-Kale has never been a majestic castle. In the 1811 year, the adjutant Duke de Richelieu Louis Victor de Rocheshuar was a member of the expedition to Sujuk-Kale. Here is how he described this “castle”:
“The fort consisted of four walls, inside it there were only ruins and piles of garbage, no one thought to protect this ruin ... We were extremely disappointed with our new conquest, duc de Richelieu considered himself a victim of mystification. How could they have ordered such expedition from Petersburg? Why was it necessary to move six thousand people and numerous artillery into the campaign? Why equip one fleet with ten ships? What are all these expenses and troubles for? In order to seize the four dilapidated walls. " 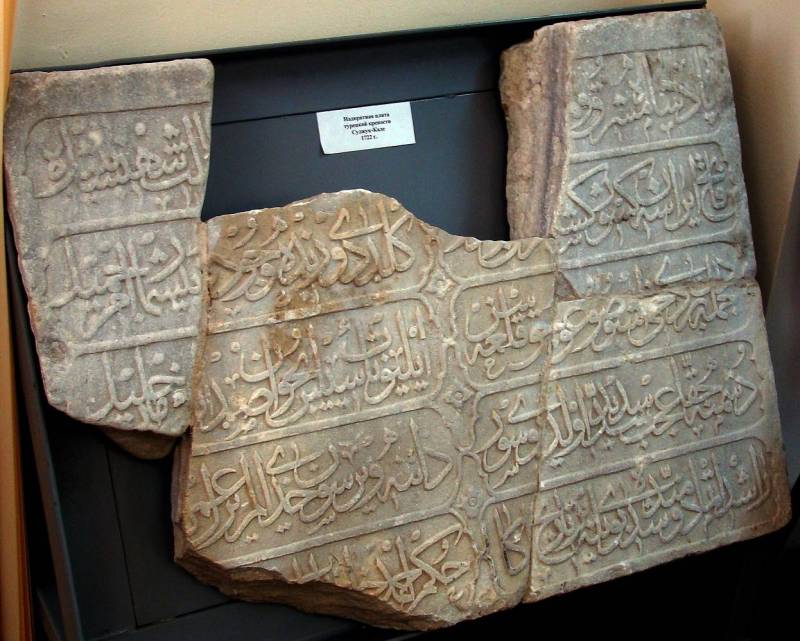 Gate plate Sujuk Kale
Moreover, never Russian troops directly stormed Sujuk-Kale. Each time they stumbled upon the ruins of a fortification plundered and turned into ruins either by the Turks themselves or by the local Circassians. The unwillingness of the garrison to defend this outpost of the Ottoman Empire is understandable. Appointment to the garrison was perceived as a kind of reference. After the loss of Crimea, the Turks were in Sudzhuk-Kale in geographic isolation, without proper provisions and without sources of fresh drinking water. Even the janissaries who fell into the garrison of the fortress, at any opportunity, deserted. The deplorable state of fortification is also characterized by the fact that the Circassians, sensing the weakness of the Ottoman "allies", began to steal them for resale.

Fourth, what sparkling camp is Spencer talking about? Most likely, he skillfully veils the banal and dirty slave market, which flourished here until the arrival of Russian troops. For example, it was in Sudzhuk Bay that the aforementioned Louis Victor de Rocheshuar detained a small brig, the cargo of which were Circassian girls for Turkish harems. However, it is already known that Sujuk-Kale, like any Turkish fortress on the coast of the Caucasus, was primarily the center of the slave trade. Confirmation of this can easily be found both among Russian historians and foreign ones: Moritz Wagner, Charles de Paysonel, etc. Directly from Sudzhuk (Tsemess) bay annually, up to 10 thousands of slaves were taken to Constantinople.

Thus, the Sujuk "castle", the "heroic" White Helmets "in Syria or the" heavenly hundred ", made up of victims of an allergic reaction and car accidents, are links of one chain as old as the world. And it’s time to draw conclusions based on hundreds of years of experience.