Professions of the future. What to teach new generations? 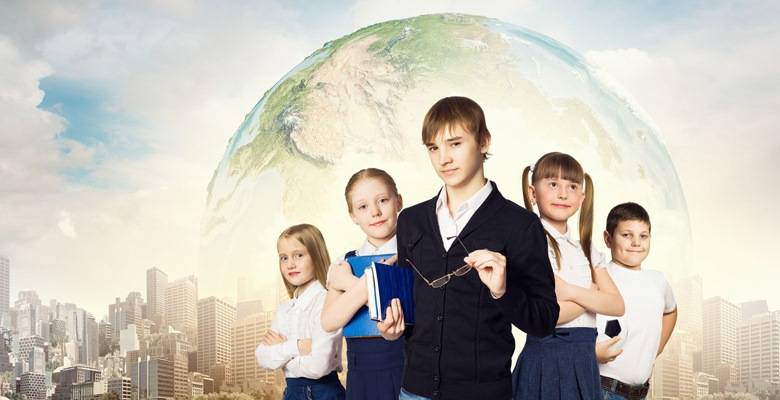 The problem of employment of future generations only at first glance seems simple and easily solved. The main trend is the widespread robotization and computerization of almost all spheres of human life, which automatically frees up a lot of human resources. Look around: in the cities, bank cash desks practically disappeared, everyone switched to electronic payments and transfers. Over the past five to six years, several waves of mass reductions in the Russian banking sector have passed. Another couple of bills restricting the circulation of paper money, and only programmers will remain among bank employees.

This trend has long reigned in Europe. In Germany, for example, it is impossible to buy a car for cash at all in a car dealership. On the one hand, this approach allows total control over the movement of money supply, and on the other hand it forces corrupt officials to buy apartments for storing hundreds of kilograms of cash. In the distant future, the situation could be seriously complicated - there will simply be no jobs for the ever-growing population of the Earth. Indeed, even now, if organizations are transferred across Russia to real electronic document management and electronic databases, then a quarter, or even a third of employees can be safely dismissed. And in the future, it will be necessary for the population suffering from idleness to come up with artificial professions, the effectiveness of which is of no interest to anyone. The state largely clings to the class of workers in their country: if they go on a massive strike, the economy will collapse. This, by the way, was the basis of all revolutions, and the rulers had to listen to the voice of the working people. If nothing depends on millions of citizens, their hands will not be needed, then the state does not particularly need them.

What consequences this will lead, I think, to fantasize unnecessarily. Now even the name for this layer of people has been invented - useless class, or "useless class." But I hasten to reassure, this is only the most pessimistic scenario for the development of the proposed future. Still, most futurists agree on the principles of a serious transformation of the labor market, rather than its disappearance. 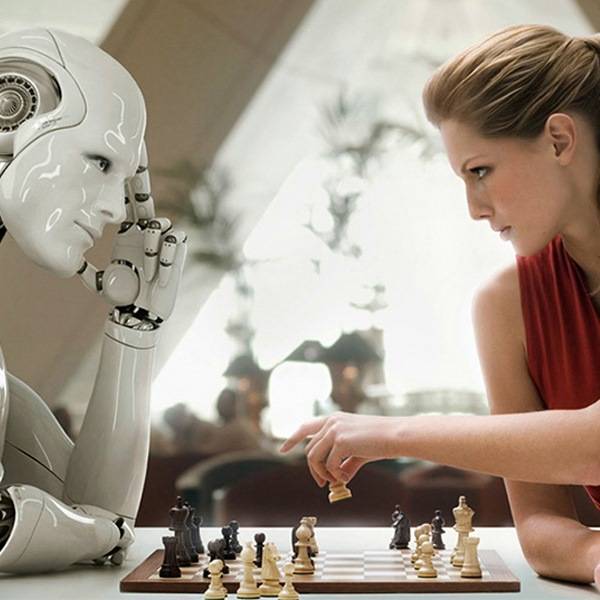 The most important feature of all changes in the future will be their incredible speed. For example, global Internet traffic from 2005 to 2021 years should grow 127 times! It applies not only to gadgets and PCs, but also to things around us: refrigerators, televisions, and so on. A couple of years will pass, and for every inhabitant of the Earth there will be at least three devices connected to the World Wide Web. Naturally, this directly affects jobs. “Smart devices” will force people out of the sphere of mass production once and for all, forcing them to search for new areas of application of their personal time and potential. Here, a person has one indisputable advantage even over the most advanced robot or program: he is able to think creatively. The so-called customization of industrial production, services and the knowledge economy so far gives hope that a person will be needed somewhere. It seems that the engineer of the future will generally not need to know the basic physical laws - artificial intelligence will calculate everything for him, and the animated creator will only add a few touches that “humanize” the final product. Or it will just be enough for him to generate an idea, and a conditional computer will do everything further on himself. 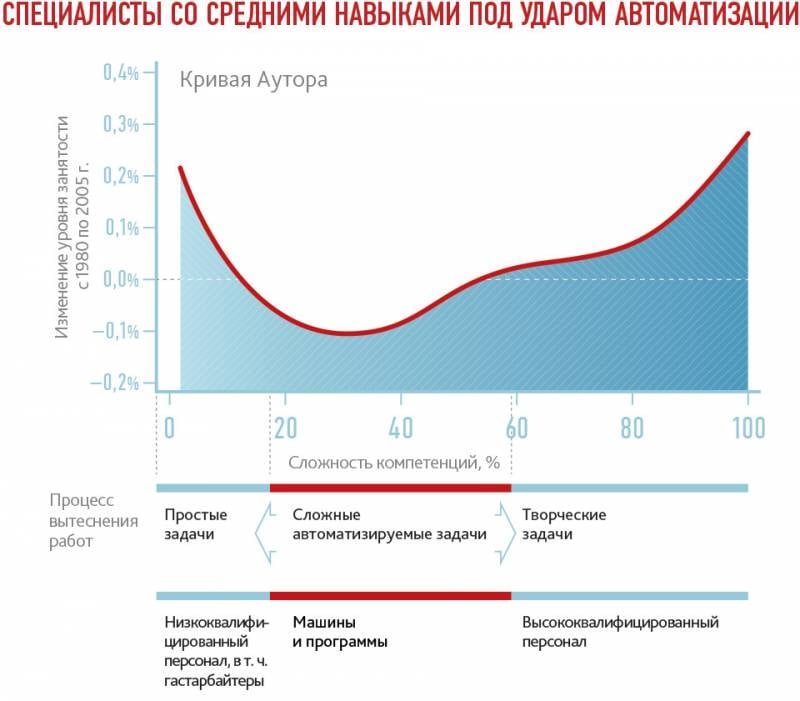 Auto Curve
In this regard, the analysis of the American economist David Autor, who tracked the changes in employment in the United States industry from 1980 to 2005, looks very interesting. A summary of his work can be found in the collection “Skills of the future. What you need to know and be able to in a new complex world. "

The outreach revealed a twenty-five-year trend towards a decrease in the employment of mid-level specialists, with a simultaneous increase in the need for highly skilled workers. Roughly speaking, it is very expensive to change the top link to robots and programs, while the creative potential of a person is much cheaper. At the same time, there is an increase in the need for low-skilled labor - here also the widespread introduction of automation will pay off only in decades, if not later. Of course, in this situation, the flows of labor migrants who are ready to work for low wages are seriously saving. And what to do when the economic effect of introducing robots into the guest workers sector at one point outweighs all the costs? Already, Kiva robots, of which the giant Amazon has more than 50 thousand, are completely replacing low-skilled warehouse workers. By the way, in Russia, by the way, we can still be calm - in the country, in 10000 jobs, there are only 1 industrial robots in the country. But in the USA this number reached 176, in Japan 305, and in Korea in general 531.

Kiva Robot in the Amazon Empire
In addition to ousting workers from industrial enterprises, automation creates another benefit - the exclusion of a number of intermediaries between the producer of the goods and its consumer. The example of Yandex.Taxi is the most vivid confirmation of this - a whole class of coordinators, managers and dispatchers flew into the pipe, noticeably raising the average cost of the service.

Learn in a new way?

In connection with the wave of total automation approaching us, it is time to think about what skills our children need. Incidentally, Benjamin Bloom, professor of pedagogy at the University of Chicago, thought about this much earlier (in the 50 of the last century). He proposed ranking in terms of complexity and relevance six mental (cognitive) tasks in ascending order: remember, recognize, apply, analyze, evaluate and create. That is, the classic postulate “cramming at school is everything” in the last century turned out to be flawed. Now, at the top of the trend, children should have the ability to isolate components from the system and describe how the parts relate to each other and to the whole. At the next level - the ability to evaluate, that is, make their own judgments based on external or internal criteria. Finally, the most important are the ability to create a fundamentally new, to determine the components of a new structure, to connect existing parts for the emergence of a new one. Actually, the formation of the future should be built on these three pillars. The only question is - how?

Let us leave the problems of creating new schools for teachers, and consider for ourselves what else futurologists are preparing for us in the near future in the labor market. The relevance of the human imagination comes to the fore, which so far exceeds the machine imagination by several orders of magnitude. And there is an assumption that a computer will never be equal to a person in this category. Therefore, in the industry of games, video, music, scripts and all that sort of thing, you can quite look for your descendants a “warm” place. In addition, demand is expected for professions in which robotization cannot replace human-human communication. For example, a teacher, mentor, mentor, or coach (call whatever you want) will never go out of trend. At the same time, a deep individualization of the learning process will come to the fore. Feel the modern relevance of tutors? These are the first signs of the future.

Humanity is slowly but surely increasing its average life expectancy. In this regard, we are waiting for the development of a whole range of services aimed at older people. It will be about the same as whole corporations are working on children's interests now.

Now, in connection with the described problems, the possibility of introducing future unconditional basic income (handsome fellowship), which would guarantee the basic needs of all members of society, is being seriously considered. And this is not unemployment benefit - in Finland, from January 1 of 2017 of the year 2000, the unemployed were paid 560 euros, while payments did not stop when a person was employed. In a far-reaching version, even the restructuring of the whole consciousness of a person is considered: now he will not need to take care of earning, and the freed up time will be spent on communication, helping others, pleasure and self-realization.

However, the main trend in the education of future generations should be the rejection of such linear professions (“affairs of a lifetime”), leaving which would put an end to the future career. A person should be able to quickly and efficiently rebuild, find new applications of his potential and areas of self-realization. Simply put, they fired from the post of advertising manager - he became a blogger. And how he exhausted himself on Youtube, quickly retrained and began to design residential buildings. And modern education only needs to find tools for the formation of these "universal" skills.