What weapons does Russia sell in the USA? 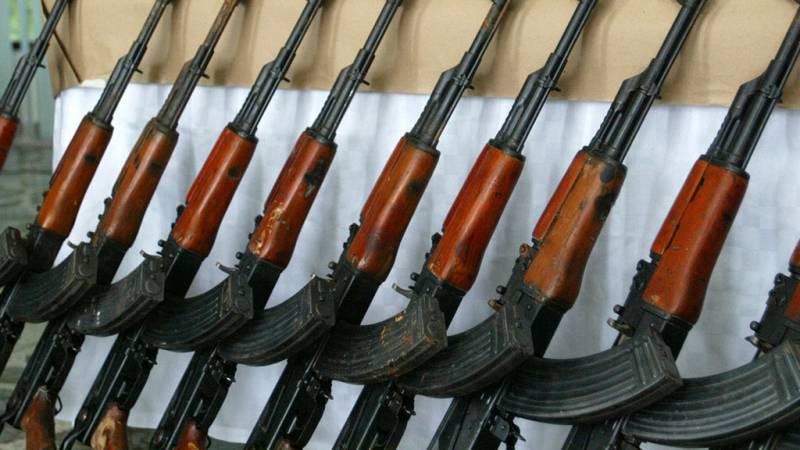 Russia and the United States are two superpowers competing with each other and in the global arms market. But, oddly enough, Russia is at the same time a supplier of some species weapons and military equipment for the needs of the armed forces of the United States of America and their allies. Although close military-trade relations of the two countries cannot be called, they exist.

Military trade of the USSR and the USA

Economic relations of the USA and the USSR in the pre-revolutionary period of the Russian stories were not significant. Compared with England, France or Germany, the United States played a very modest role in the economy of the Russian Empire. Then, after the October Revolution and during the years of the Civil War in Russia, the existing ties were practically interrupted and only in the 1920 year the USA lifted the embargo on trade with Soviet Russia.

In the 1920-ies of the USSR turned into one of the most important buyers of American tractors and cars, which were delivered, including the Red Army. The Soviet Union itself at that time could not offer the United States any high-tech products due to the backwardness of Russian industry. Only during the years of industrialization did the situation begin to change.

Nevertheless, during the Great Patriotic War, the United States acted as one of the key suppliers of military equipment and weapons to the Soviet Union. On October 1, on October 1941, US President Franklin Roosevelt approved the USSR’s connection to Lend-Lease, after which deliveries of goods from America began. 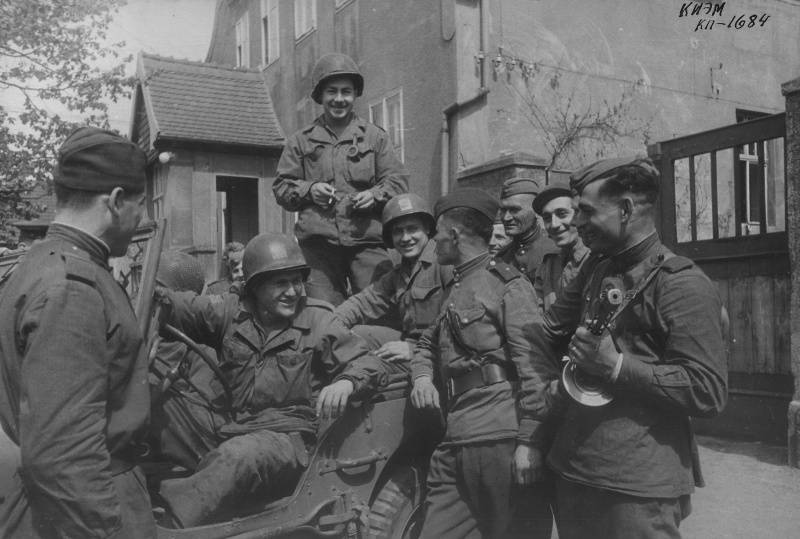 The Soviet Union, and then Russia, always competed in the world market with the United States in the field of arms supplies. Indeed, for both the United States and Russia, military-industrial export is one of the most important items of income, receiving money from numerous buyers of weapons and military equipment from Africa, Asia, Latin America and Europe. Both in Soviet times and now, Russian and American intelligence are interested in gaining secrets in the military-technical sphere, and any contact with the latest weapons of a probable enemy is a serious omission and causes numerous problems.

The main buyers of Russian weapons are traditionally India and China, followed by Vietnam, Algeria and Venezuela. Russia supplies weapons to numerous African countries, the countries of Southeast Asia, the former republics of the Soviet Union, a number of countries in Latin America (Nicaragua, Cuba, Bolivia), and Mongolia.

Recently, states that have not previously been considered priority buyers of Russian products have shown interest in Russian weapons. We are talking about countries such as Turkey, Pakistan, Saudi Arabia, the UAE, the Philippines, which were in the orbit of American political and military influence and armed their armies with American weapons.

The purchase by Turkey, the US ally of NATO, of the Russian C-400 anti-aircraft missile systems, was the most striking example of the Russian defense industry entering new markets. And the fact that some catastrophic consequences did not finally come to Ankara became a signal for many other US allies, for example, for the same Saudi Arabia, in which they also started talking about the possibility of acquiring Russian anti-aircraft missile systems.

It turns out that Russia was even able to move the United States in certain segments of military-technical exports, penetrating the markets of states that are Washington's traditional military-political allies. However, just as well, the United States entered the post-Soviet arms market and began supplying weapons to many former USSR allies in Africa and Asia.

Despite the existing competition between Russia and the United States in the field of arms exports, in modern history there has been a place for the supply of Russian military equipment to protect American interests. Moreover, these deliveries were made to a country that had long been in the orbit of Soviet political influence. It is about Afghanistan, where since the end of the 1970-ies the bloody civil war between various military-political forces has not stopped.

For the ongoing hostilities against terrorist groups, the central government of Afghanistan in Kabul needs more and more weapons, especially since the country's armed forces need modernization, and the Afghan government is not able to conduct it on its own. In 2011, Russia entered into the first contract for the delivery of Russian Mi-17 helicopters to the Afghan armed forces from the US federal budget. 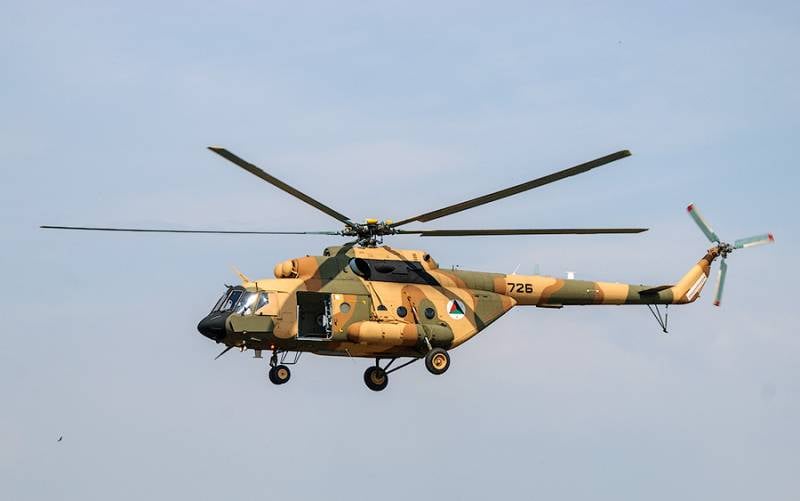 As you know, the modern Afghan army is financed and armed by the American side, therefore, although helicopters were supposed to be delivered to Afghanistan, the purchase was carried out at the expense of the US budget. The terms of the contract were successfully fulfilled, after which a number of new contracts were concluded. Total from 2011 to 2014 Russia was supposed to supply Afghanistan with a 63 Mi-17 helicopter totaling 1,1 billion dollars. The Pentagon paid for the supply of helicopters for the Afghan army, thereby ensuring stable financial revenues to the Russian budget.

In 2014, the command of the US armed forces was about to conclude another contract for the supply of 15 Mi-17 helicopters to the Afghan army, but this time, amid the events in Ukraine, American congressmen blocked the deal and it did not take place. Anti-Russian sanctions adopted in connection with the reunification of Crimea with Russia and the events in the Donbass put an end to most joint US-Russian projects, and arms sales were in the first place among them.

At present, for obvious reasons, military-technical cooperation between Russia and the United States has been curtailed. But in one segment, the United States still cannot do without Russia. We are talking about the supply of RD-180 liquid rocket engines to the USA, which are used in the American space industry. Without them, the US space industry will be in a state of severe crisis.

As American experts have repeatedly admitted, it will take years, if not a decade, to develop and put into serial production similar American rocket engines. Therefore, now the United States continues to purchase RD-180 from Russia. Even anti-Russian sanctions and the situation in Ukraine and Syria at one time did not become a reason for breaking the cooperation between countries in this area.

How Russia sells US rocket engines

The RD-180 liquid-propellant rocket engine was created in Russia already in the post-Soviet period - in the middle of the 1990-s. The basis was taken RD-170 - the world's most powerful liquid-propellant rocket engine. In 1996, RD-180 won the competition for the creation and sale of engines for US rockets Atlas-3 and Atlas-5. Thus began the history of deliveries of RD-180 to the United States of America.

All RD-180 production is concentrated in Russia, and patent rights belong to NPO Energomash. In 2008-2010 Energomash suffered serious losses in connection with the supply of engines to America, since they were supplied at a price that amounted to only half of the cost of production. This was due to an increase in the cost of production against the background of maintaining the same purchase prices. The situation, however, was gradually corrected after the 2010 year. 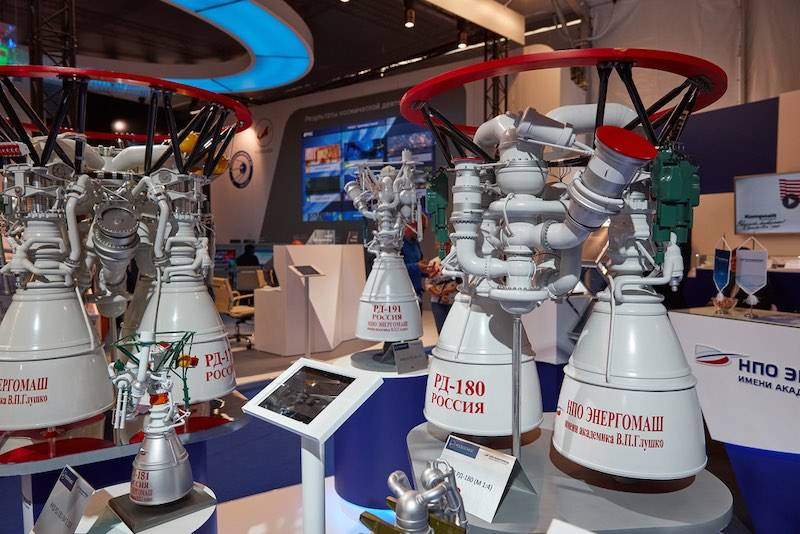 When relations between Russia and the United States seriously worsened in the 2014 due to the Ukrainian crisis, both Moscow and Washington started talking about a possible cessation of rocket engine supplies. From the point of view of Russian politicians, it was a little strange to supply engines for the needs of the US missile industry with such a massive deterioration in relations and the open transformation of the United States into a potential military adversary of our country. In particular, Dmitry Rogozin then advocated a ban on the use of the Russian rocket engine for military purposes.

The American "hawks" argued in the same way, who saw in the supply of rocket engines not only a humiliation to Russia, but also a brake on the development of engine production in America itself. As a result, the American leadership decided to develop a new, actually American engine, which could replace the RD-180. The US Department of Defense allocated $ 160 million to develop this engine. But, according to many experts, more than once voiced in various world media, the development of the American engine will take at least five years.

In 2017, Blue Origin introduced the new BE-4 methane engine, which was called a possible alternative to Russian rocket engines. 11 February 2019 of the year with a loud statement was made by the famous entrepreneur - innovator Ilon Musk, who announced the successful testing of the Raptor engine. According to Mask, the engine, assembled by specialists from his company SpaceX, shows a pressure in the 268,9 bar, which is even higher than that of the Russian engine.

It is worth noting that the United States also has a license for its own production of RD-180, valid until 2030. That is, Washington has yet another ten years ahead of which it is possible to expand the production of rocket engines at the ULA plant in Decatur.

Thus, Russia currently supplies rocket engines to the United States. In addition, the American army through its allies and through various other channels acquires small batches of small arms of Russian production, which are then used in various conflicts and for the training of American soldiers.