KF-X fighter, or How not to do it 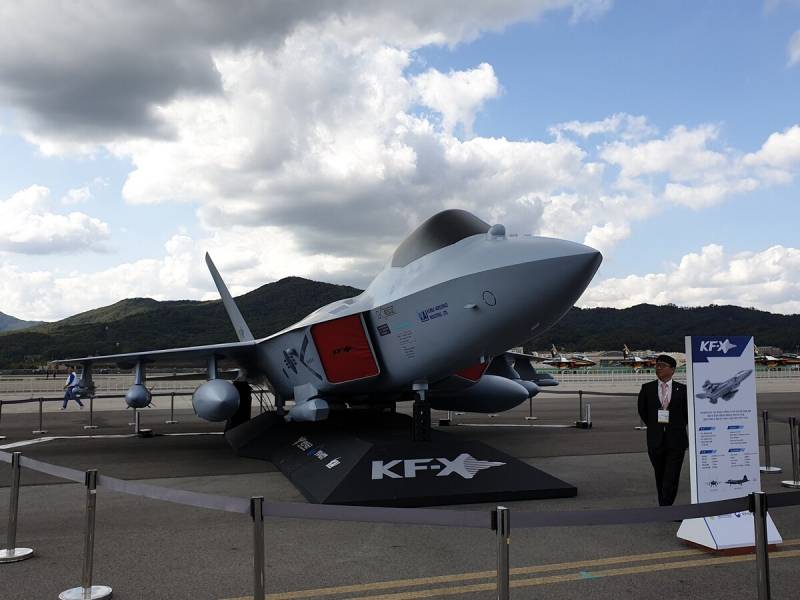 The situation in which South Korea is located is far from the most pleasant. A strange northern neighbor, who, apparently, has a fully operational nuclear weapon, as well as the territorially close quasi-communist China, which is heading for world domination faster than the United States. There are also Japan and long-standing grievances related to the Second World War. And a number of other countries in the Asian region with their own problems: they obviously do not care about South Korea. At least, they definitely do not intend to protect her.

In this regard, it is not surprising that the Koreans observed the American elections even more actively than the US residents themselves. After all, their future is at stake: America is the only real ally that can really help.

In addition to the States, the Republic of Korea can rely on its army, above all, the Air Force. I must say, quite "motley" in composition. Together with the relatively modern F-16 and F-15 fighters, Koreans have the frankly old F-5 Tiger II and F-4 Phantom II. As well as training and combat training vehicles that will not do much weather. By the way, the first ones want to completely decommission by the 2030 year, and the Phantoms already by the 2024 year. 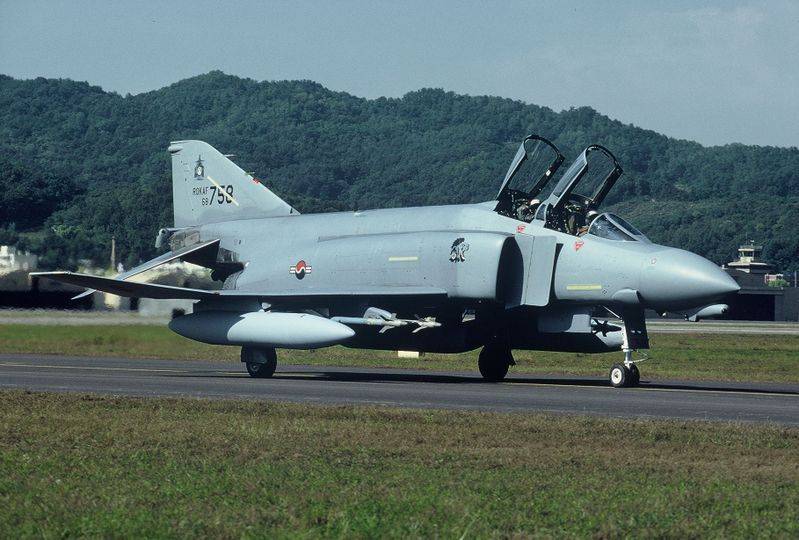 The basis of the South Korean Air Force is the F-16C / D fighters - in all, more than 150 vehicles. And soon, this basis will be the latest F-35A. Recall that all of Korea plans to get 60 of such fighters. Currently, the Koreans have received about ten of these machines. In general, the F-35 will seriously increase the potential of the Korean Air Force, taking it to a new level. In which the threat from the fourth generation fighters will be very conditional in many respects: at least if the Korean pilots will not "climb" into the close maneuver battle. By the way, there have been almost no cases of the latter over the past decades. 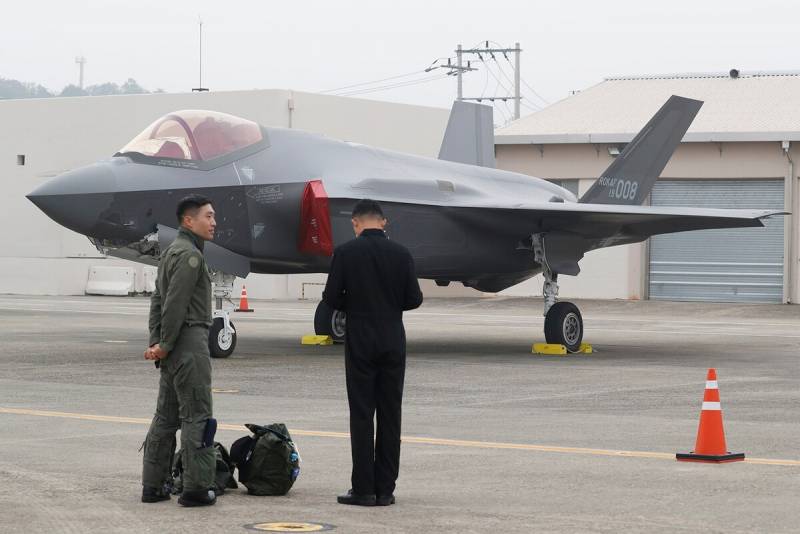 And here is what is remarkable. The project was first announced by ex-president of South Korea Kim Dae-jung back in ... 2001 year. A whole “eternity” has passed since then: this politician has not been alive for a long time, just like Kim Jong Il (he passed away in 2011). Some countries ceased their actual existence, while others, let us say so, underwent metamorphoses with their borders.

And only one thing remains unchanged - the South Korean fighter, which they wanted to get to the 2020, there wasn’t and never was. As part of the program, so far no one pre-production prototype, prototype or even technology demonstrator has been built by KF-X. 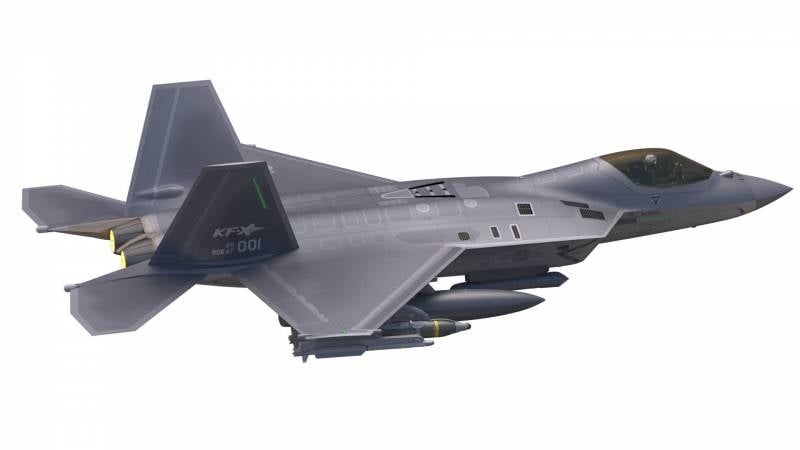 If you look more closely at the program, then some points begin to become clear. Recall that as part of the initial operational requirements for the KF-X, it was planned to create a single-seat fighter with two engines and the use of stealth technology. In terms of size, the car was supposed to be larger than the French Dassault Rafale and the pan-European Eurofighter Typhoon, but smaller than the F-22 and F-35.

In 2010, South Korea and Indonesia agreed to work together on the program. However, already in March, the 2013 th Ministry of Defense of South Korea and Indonesia postponed the implementation of the joint project for the development of the KF-X / IF-X fighter for a year and a half. In July 2013, the Ministry of Defense of Indonesia announced that it intends to continue developing the promising fighter on its own - something almost unbelievable given the lack of experience in creating fighters among Indonesians.

The next unexpected turn was the presentation in November 2013 of the year by Korean Aerospace Industries of a model of a single-engine version of a promising fighter. The logic was something like this: Korea already has a single-engine training FA-50 Golden Eagle of its own design, so why not use the experience gained to create a new fighter? 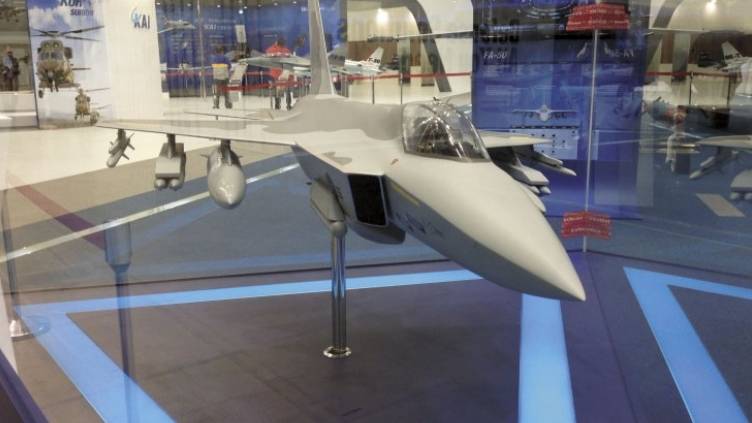 Of course, the “flying school desk” and the multi-purpose stealth are fundamentally different aircraft that require different technical solutions. They soon realized this in South Korea, after which they forgot about the single-engine version, as about a nightmare. However, there were no less questions from this.

Four with plus or three with minus?

On October 2, 2019, Defense-aerospace reported that the Department of Defense Procurement Programs of South Korea issued Korean Aerospace Industries permission to produce the first flight model of the promising KF-X fighter. The assembly of the car should have begun before the end of October. By the way, shortly afterwards, a full-size model of a promising fighter was presented at the ADEX arms exhibition in Seoul.

He, in general, confirms the basic conceptual solutions. From the point of view of aerodynamic layout - it is almost a complete "copy" of the F-22. However, as already noted above, the car will be significantly smaller than its overseas counterpart. We are talking about a fighter with two engines General Electric F414. 16,9 meter long and wing span 11,2 meter. The maximum take-off mass of the fighter will be 25,4 tons. The aircraft will be able to fly at speeds up to Mach 1,8-1,9. The promising fighter will receive 10 suspension points for missiles, bombs and various hanging containers. It is planned to create both a single and double option. 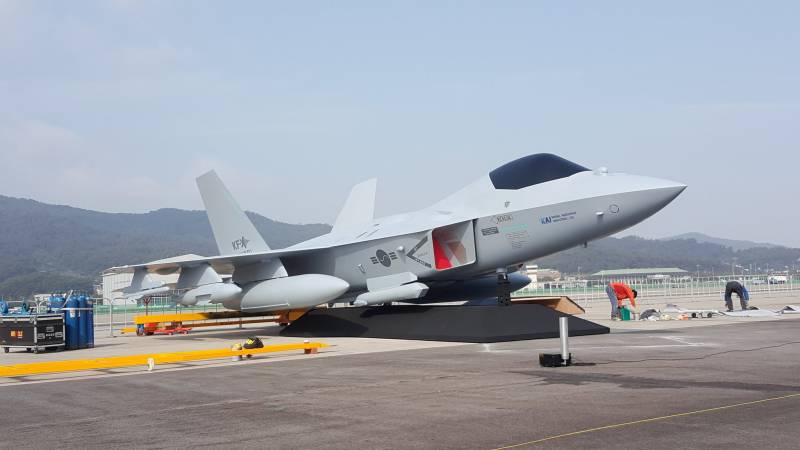 The most interesting thing is that the Korean "stealth" is hardly noticeable in essence. At least in the first stage. The Block I version will not have internal weapons bays: this, by the way, is clearly visible on the example of the shown layout. However, Korean Aerospace Industries do not lose optimism and believe that in a later version of the machine, in order to maintain radar stealth, the main armament can be placed inside.

The relatively small fuselage, as well as the location of the chassis and air intakes, make two assumptions. Either a) the internal armament compartments will be very small (significantly smaller than on the F-22 and F-35), or b) they will not be at all. By the way, in the images presented, the production car carries four MBDA Meteor missiles, partially sunk in the fuselage. Previously, a similar solution was applied by European engineers in the development of Eurofighter Typhoon. By the way, on 22 on November 2019, the French edition of La Tribune, in the material “MBDA monte à bord de l'avion de combat sud-coréen, le KF-X”, wrote that the Korean Ministry of Defense chose the MBDA Meteor rocket to equip the KF-X. 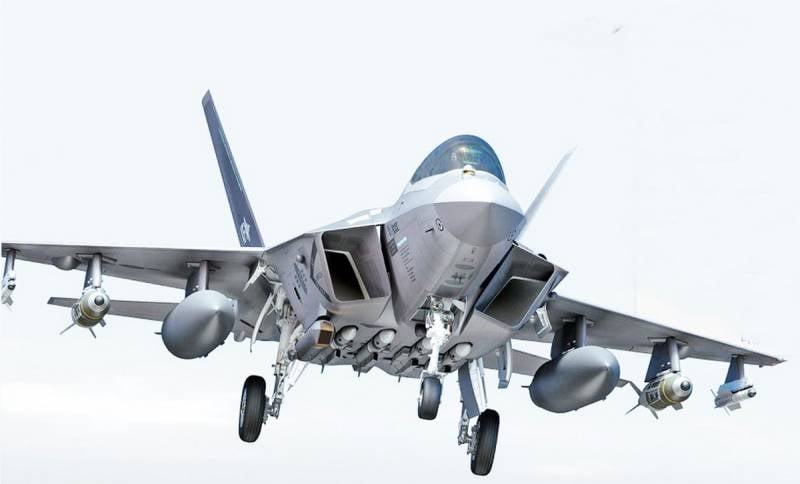 The Koreans want to develop a new fighter in the 2026 year, however, given the difficulties inherent in the creation of modern technology, this period can be mentally postponed to the 2030 year or even later.

And here a completely logical question arises. Was it worth the South Koreans to invest in this project in order to actually receive their own Eurofighter by the 2030 year? Despite the fact that the Europeans themselves by that time would approach the rearmament of their Air Force on the sixth-generation fighter NGF (Next Generation Fighter), created as part of the large-scale FCAS program (Future Combat Air System). The same probably applies to the United States with its F / A-XX program. Well, China will have a fleet of fifth-generation Chengdu J-20 fighters, and perhaps even bring to mind its fellow J-31 (but generally the sixth generation is also quite actively talked about in China).

It turns out that the South Koreans can get a plane that is outdated at the beginning of development. Moreover, the experience gained during its development can hardly be applied in other areas - by that time the aircraft manufacturers of the USA, Europe and China could make more than one revolution.

In a broader sense история with KF-X once again shows that the development of modern fighters has become so complicated, risky and expensive that only global superpowers or a number of powerful countries of the world, united in the framework of the program, can win on this path. For obvious (primarily political) reasons, not everyone can do this and not always.