In St. Petersburg laid the second combat icebreaker of the 23550 project "Nikolai Zubov" 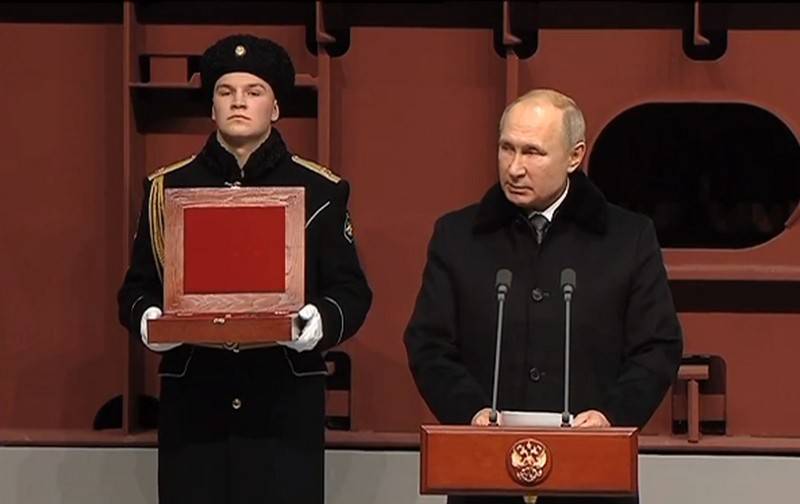 At the Admiralty Shipyards shipyard in St. Petersburg, the second ice class patrol ship of the 23550 project Nikolay Zubov was officially laid down. The ceremony was attended by Russian President Vladimir Putin, who visited a shipyard.


During the visit to the Admiralty Shipyards, the president was shown the mortgage section of the new ship, to which he attached a plate with the name of the ship. After that, he talked with the workers of the plant and thanked them for their work. Vladimir Putin was accompanied by Defense Minister Sergei Shoigu, Navy Commander-in-Chief Nikolai Evmenov, Minister of Industry and Trade Denis Manturov, Deputy Prime Minister Yuri Borisov, President of the United Shipbuilding Corporation Alexei Rakhmanov.

According to the management of the shipyard, the degree of readiness of the first serial patrol ship of the ice class Nikolai Zubov is 11%. According to the plans of the enterprise, the vessel will be transferred to the customer in November 2024 of the year.

Earlier it was reported that the lead ice class patrol ship of the 23550 project "Ivan Papanin" was launched in St. Petersburg.

Project 23550 ice-class patrol ships (combat icebreakers) were developed by the Almaz Central Marine Design Bureau (TsMKB) as a replacement for project 21180 military icebreakers, on which it was built and transferred the fleet just one icebreaker - Ilya Muromets.