Crossbow in Russian. Self-arrows of warriors 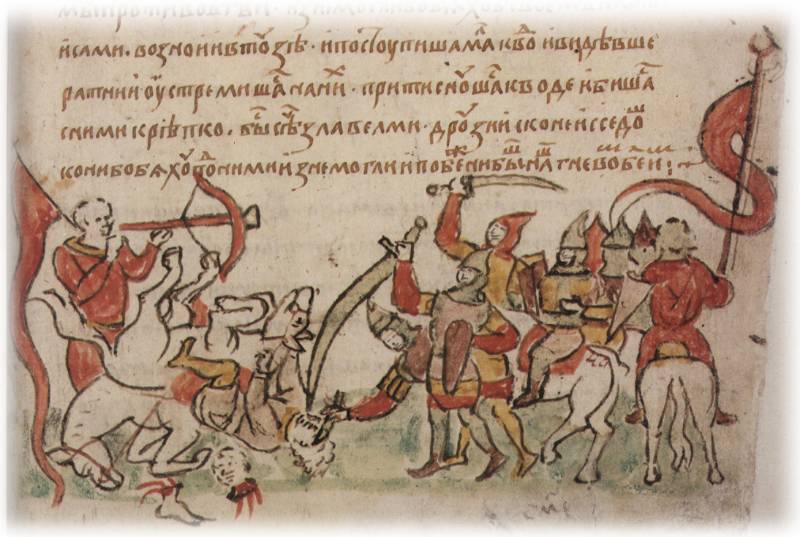 The battle of Novgorod-Seversky troops with the Polovtsy. Novgorod on the left uses a crossbow. Illustration from the Rodziwill Chronicle / runivers.ru

The origin of the Old Russian crossbow used to be a subject of controversy. For some time, the version about borrowing such weapons from the Volga Bulgars was very popular. This happened during the armed clashes of the second half of the fourteenth century.

However, the annals contain earlier evidence of the use of self-arrows. Many archaeological finds confirming the data of the annals are also known. Due to this, the period of the appearance and development of the first self-arrows was able to move to the XII century. In addition, chronicles and finds made it possible to clarify history Old Russian throwing weapons. 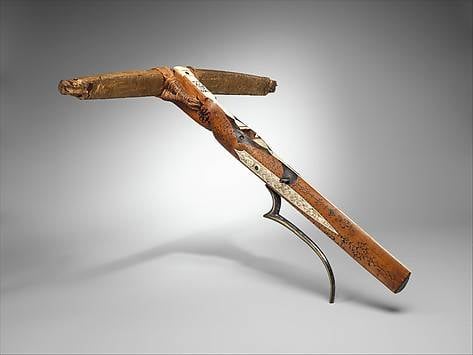 European crossbow of the beginning of the XV century. Similar designs were used in Russia. Photo courtesy of V. Shpakovsky
The first mentions of self-arrows are found in the Nikon and Radziwill annals in descriptions of the events of the second half of the 12th century. Fights with the use of such weapons took place in Novgorod and Chernigov, which allows us to estimate the approximate area of ​​its distribution at that time. In the annals there are drawings that accurately show the design of weapons.

Available data suggest that Ancient Russia borrowed crossbows from its western neighbors. By that time, crossbows were widespread in Europe, and Russian warriors could not miss them. Thus, the "Bulgarian" version seems untenable.

In various archaeological complexes on the territory of the Russian principalities, many tips of crossbow arrows, parts of self-arrows, etc. were found. However, some findings are of great interest. So, when exploring the city of Izyaslavl, they found the remains of a shooter, in the equipment of which there was a belt hook for tensioning the bowstring. The city was destroyed no later than 1241, and by this time its defenders had self-arrows. It is curious that the hook of the Izyaslav crossbow is one of the oldest things of this kind in all of Europe.

The scheme of the belt hook from Izyaslavl. The head part of the product (left) was fastened with rivets to the belt, at the opposite end - two hooks for a bowstring. Figure Archery-sila.ru
In the same period, the rifles of the Rus continue to be mentioned in domestic chronicles; the first references in foreign chronicles also appear. Soon, the crossbow becomes a constant "hero" of the chronicles and illustrations to them. Such weapons were actively used in all major battles over the next two centuries.

Interesting mentions of gunshots are found in descriptions of the battles for Moscow with the troops of Tokhtamysh. In the future, according to the annals, crossbows were actively used as a defensive weapon of fortresses. This period includes references and descriptions of both hand-guns and larger stationary or portable products. With their help, increased forged bolts or hewn stones were thrown. 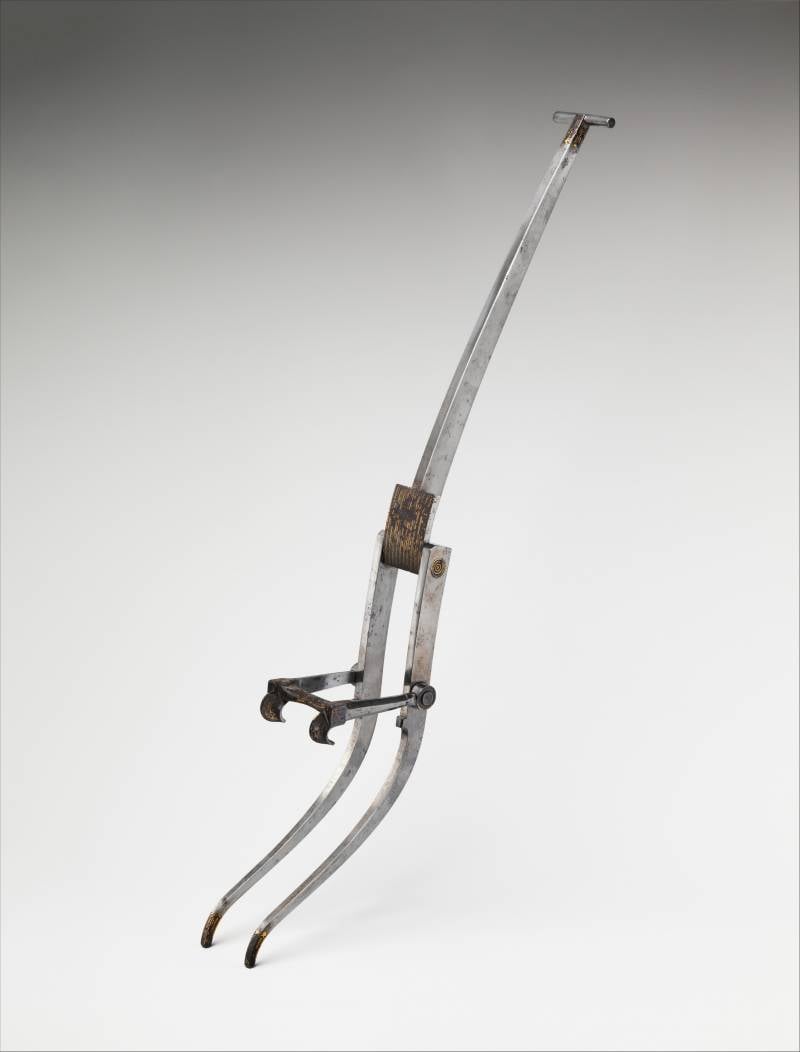 European goat leg tensioner. Photo courtesy of V. Shpakovsky
The last mentions of crossbows in the army are in documents of the late 15th century. In 1478, Ivan III sent an army to Novgorod, equipped with cannons and beeper guns. In 1486, the Russian ambassador Georgy Perkamot told the Milan authorities about Russia. He mentioned that earlier the Germans brought Russian guns and muskets to the Russians, and such weapons were widespread.

In the future, self-arrows are referred only as storage units. In particular, they are present in the inventories of the property of Boris Godunov and the Armory, compiled in the XVII century. Apparently, these were products of respectable age, made long before the compilation of inventories. 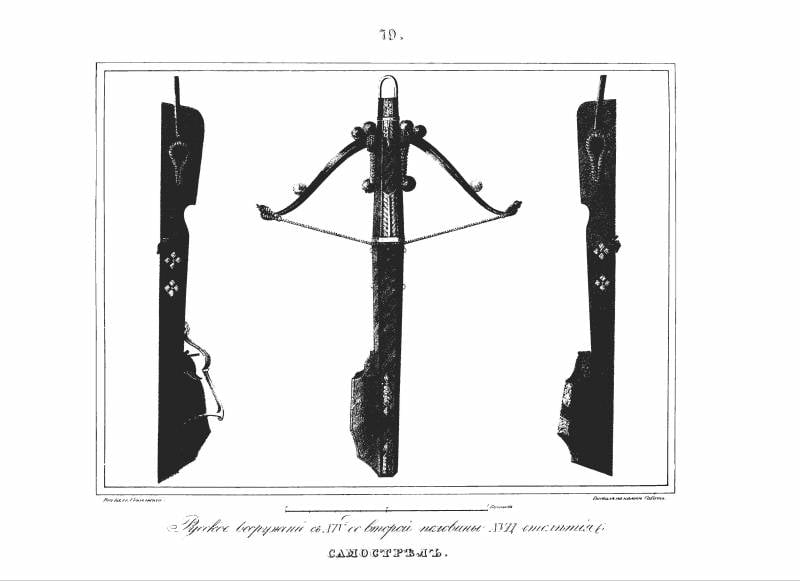 There are no exact data on this subject, but it is known that the crossbow was never truly a massive weapon of the Old Russian army. In terms of numbers, it was seriously inferior to bows that were easier to manufacture. During excavations, a significant number of arrows and crossbow bolts were found, but the proportion of the latter does not exceed 2-5 percent. of their total number.

Unfortunately, the chroniclers did not leave exact technical descriptions of the gunshots, although a number of chronicles contain drawings showing such weapons. They are not very accurate, but still allow some conclusions to be drawn. In addition, there are archaeological finds showing the construction of the crossbow, its ammunition and auxiliary devices included in the shooter's equipment. 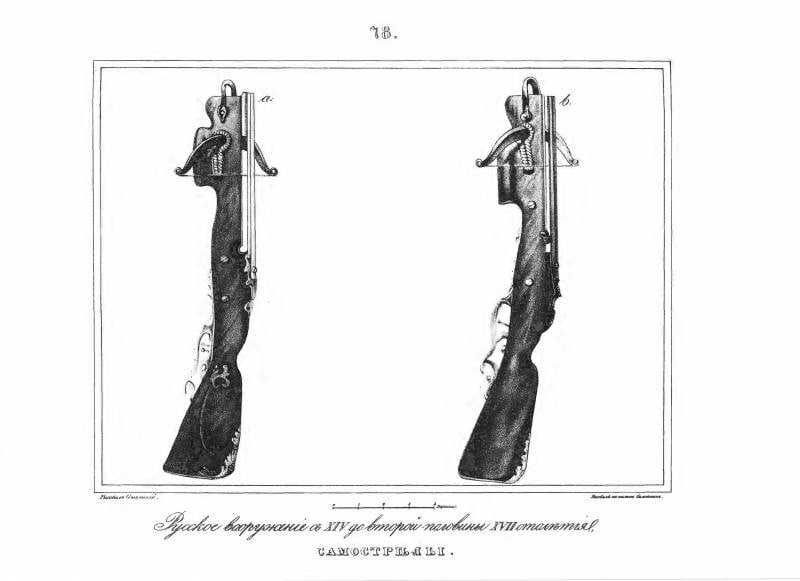 Another version of the crossbow Russian production. Illustration from the "Historical Description of the Clothing and Arms of the Russian Forces" A.V. Viskovatova
By their design, Russian self-arrows were as close as possible to foreign crossbows. The same architecture was used; various new developments were regularly borrowed and introduced. At the same time, some solutions were probably not used or not widely used here.

The basis of the design were wooden plow (bed) and iron, steel or horn bow. The trigger mechanism was based on the simplest lever. Such a design could be performed on different scales - both in the form of hand weapons, and as an easel system for fortress walls. Archaeological finds show that in Russia there were crossbows pulled with a belt hook. There is also reason to assume the presence of weapons with a gear-rotary mechanism. Apparently, the goat leg linkage was borrowed from foreign weapons. 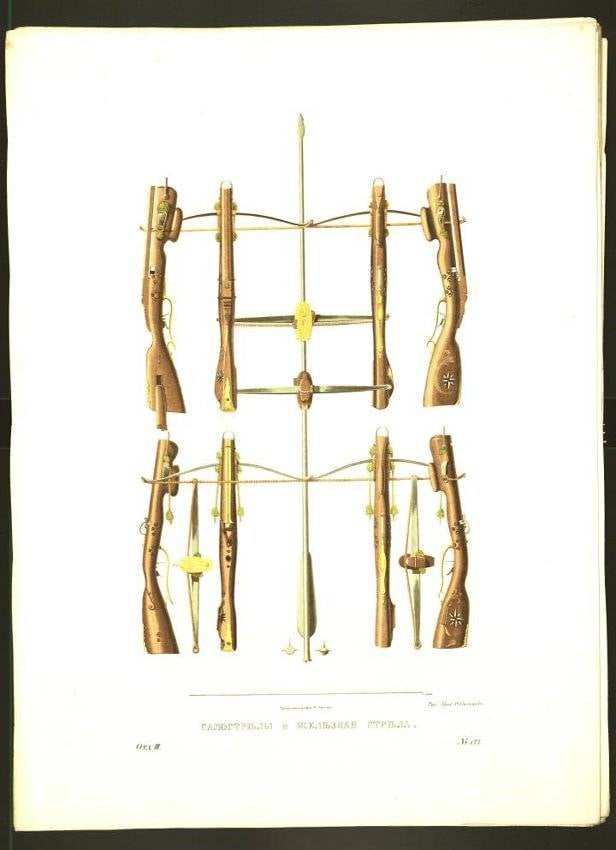 Self-arrows and a bolt. Illustration F.G. Solntseva to the "Antiquities of the Russian state"
The main ammunition for the gunshot was a bolt based on a wooden pole and a metal tip. By their design, Russian-made crossbow arrows were similar to foreign ones. Over time, the design of the bolt underwent some changes, which allowed to increase combat qualities.

The bolts of the early periods had tips of the cuttings type, driven into the shaft. The mass of the tip did not exceed 20-40 g. In the XIV century. began widespread tips with a sleeve. They were stronger and heavier until 40-50.

From the findings, a gradual change in the shape of the tip can be observed. The oldest samples had an acute triangular shape and a square section. Then the elongation of the tips decreased, and the section was transformed into a rhombus. Then rhombic tips appeared. There were products of laurel-shaped form - they could have a rhombic or flat section. 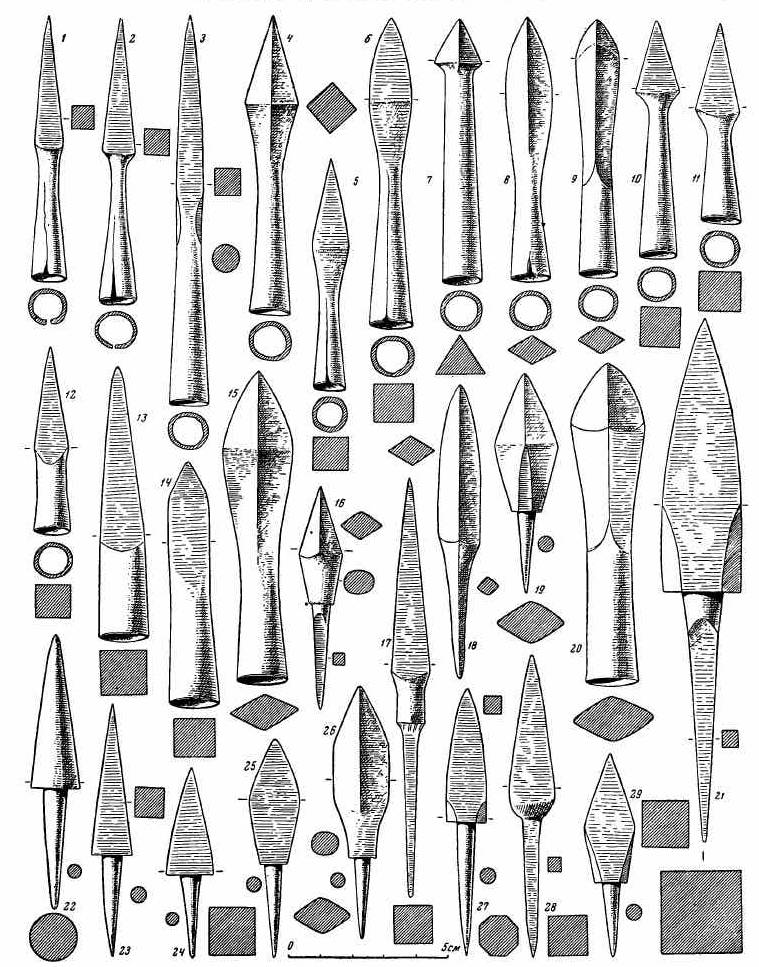 Types of crossbow arrowheads of the XII-XV centuries. Table from the "Hand throwing weapons" A.F. Medvedev
It is easy to see that the change in the shape of the crossbow tips was directly related to the development of armor. The pointed triangular tip with a square section was effective against chain mail, but with the advent and spread of plate armor, it gave way to rhombic. This allowed the self-arrows to show maximum effectiveness against the actual armor of the enemy.

Thus, the hand-gun was considered as the main means of combating the protected infantry or cavalry of the enemy. Heavy easel crossbows, in turn, used mainly stones - a convenient tool against accumulations of manpower attacking the fortress. Despite the relatively small number, self-arrows of all kinds made a certain contribution to the fight against the enemy in different conditions.

From the war to the hunt

Abroad and in Ancient Russia, self-arrows were initially used as a military weapon. They maintained this status for several centuries, and the situation changed only with the advent of early firearms. The muskets squeaked and first replaced the crossbows, and then completely decommissioned them as obsolete weapons. 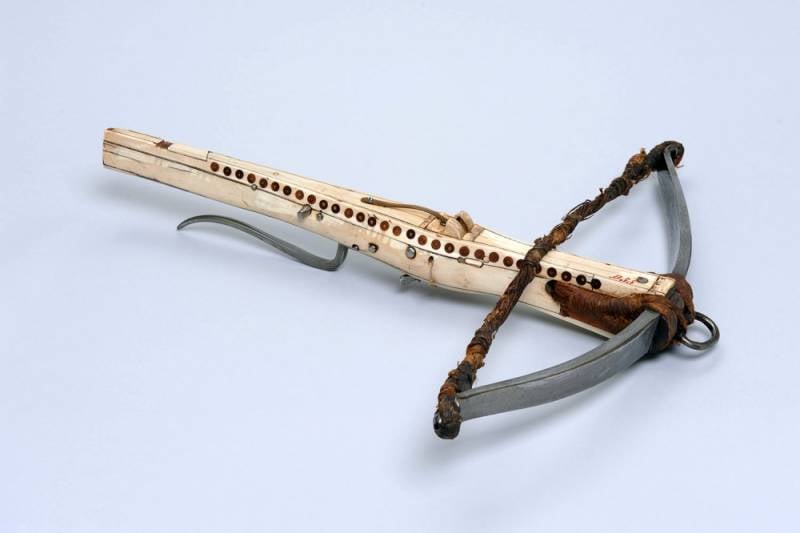 Foreign hunting crossbow of the XVI century. The design uses all the major developments in combat systems, including mastered by Old Russian gunsmiths. Photo courtesy of V. Shpakovsky
Over time, the crossbow ceased to be exclusively a military weapon and mastered hunting work. After leaving the army, he remained in the arsenal of hunters and continued to serve in a new capacity. However, as in the case of military weapons, hunting systems were of limited distribution. The crossbow was distinguished by relative complexity, which limited its potential in all areas.

At the forefront of progress

It is easy to see that the old Russian crossbow crossbow as a whole repeated the fate of a number of other weapons. This product was borrowed from foreign armies and introduced in accordance with their own needs. To the extent possible, independent refinement was carried out or foreign solutions were borrowed. Due to this, the weapon always corresponded to current requirements and allowed the warriors to successfully solve combat missions. However, the emergence and spread of a fundamentally new firearm hit the potential and prospects of propelling systems.

The crossbow left a certain mark in the military history of Ancient Russia. Later, he found application in hunting, and by now has become a sports equipment. With all this, the crossbow confirmed that its design has great potential. And borrowing is necessary and useful - if you take and implement them wisely.