New air-to-air missile for the Su-57? 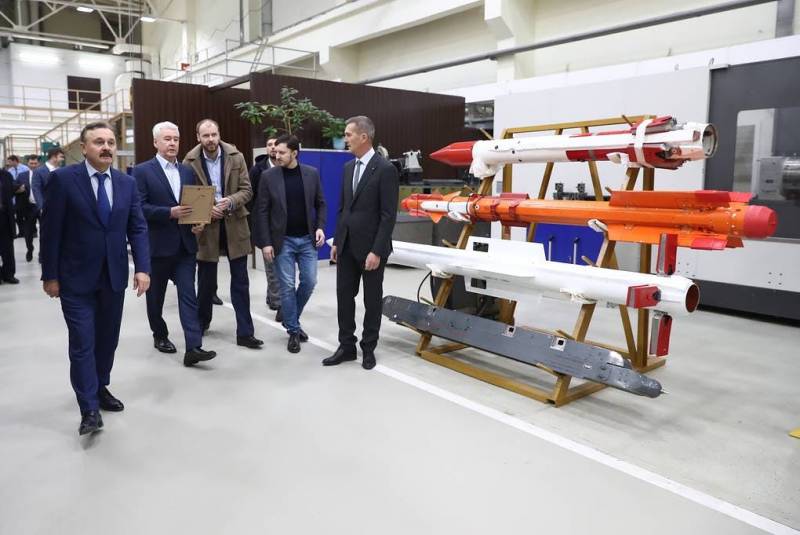 The delegation in the shop GosMKB "Vympel". A new rocket is on the stand at the top. Photo by Thedrive.com

Russian industry has shown a new guided air-to-air missile designed to arm modern and promising fighters. In this case, it is only a show - any information about this product has not yet been published. Despite the lack of information, the new weapon already attracted the attention of foreign media.

The promising air-to-air missile was shown to the public on November 18. On this day in Moscow, the opening ceremony of the reconstructed production building of GosMKB "Vympel" them. I.I. Toropova. The events were attended by the leaders of Moscow, including Mayor Sergei Sobyanin. The guests of the enterprise were shown modernized production sites, as well as some products of the enterprise.

As part of the impromptu exhibition, along with other products, several aviation air-to-air missiles. If the bulk of such products are already familiar to specialists and the public, then one of them was shown openly for the first time.

Unfortunately, so far only the appearance of the rocket is known, on the basis of which some assumptions and conclusions can be made. Product name and performance characteristics remain unknown. All this leaves room for estimates and forecasts, including the most daring. So, the foreign press has already linked the new missile with the fifth generation of fighters.

At the booth, a rocket was laid in the workshop, with one or another feature significantly different from other products. Together with her showed rockets R-73 (probably its latest modification) and R-77. A joint demonstration of several products allows us to evaluate the dimensions of the new rocket.

The promising missile received a cylindrical body of large elongation with a lateral garrot for cables. A pointed fairing is used, but its shape is unknown - the rocket was demonstrated with a protective cover. Four folding planes are placed in the rear of the hull. Probably, these are lattice rudders with resettable flat covers. Apparently, the rocket has only one set of planes.

An unknown missile has a reduced length - it is shorter than the presented P-77 and P-73. Its length can be estimated at approximately 2,5 m. By the diameter of the hull and the range of the rudders it is comparable to P-77 - 200 and 700 mm, respectively. Product weights are unknown.

The appearance of the rocket allows you to determine some of the features of its design. However, it will not be possible to establish complete tactical and technical characteristics - until the developer organization opens them. 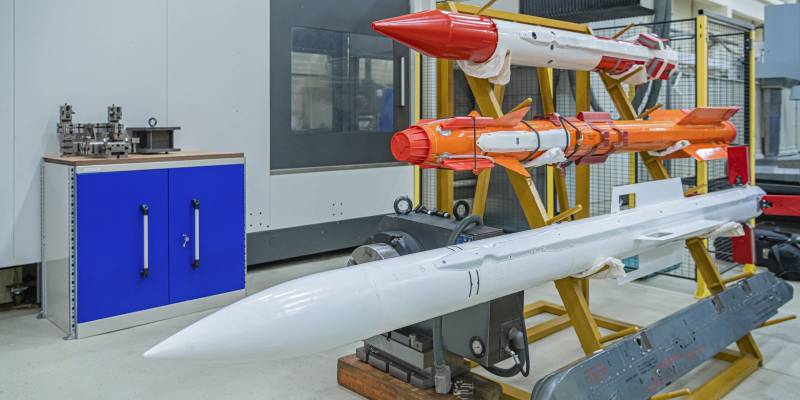 Missiles at the exhibition from a different angle. Photo by the press service of the mayor and the government of Moscow / mos.ru
The head fairing of the product is closed with a protective cover of considerable size and characteristic shape. Devices of this kind are commonly used on air-to-air missiles with a radar homing head and a radio-transparent fairing. Thus, a new missile may have a radar seeker, although its exact type is unknown. Both active and semi-active or passive systems can be used. GOS and related equipment occupy the entire head of the hull.

Directly behind the GOS is the warhead. Probably, the "traditional" high-explosive fragmentation charge is used. There are small windows around the circumference of the case - apparently, a non-contact laser target sensor is used that monitors all directions.

The central and tail parts of the body are given over to the propulsion system. Domestic air-to-air missiles are equipped with solid-fuel engines, and the new product is hardly an exception. However, the technical characteristics of the engine from the photo can not be determined.

The appearance and assumptions about the internal equipment of the rocket can be used for new assessments. In particular, one can try to determine the purpose of the rocket, and therefore other aspects of aspects.

In terms of size, the new missile is inferior to the well-known P-73 and P-77. The smaller dimensions of the product as a whole and its engine allow us to consider that it belongs to the class of guided missiles of short or medium range. The maximum range of the P-77 missile reaches 110 km, but the parameters of the promising missile should be more modest.

The new missile is hardly intended for close combat. Domestic weapons for such tasks are equipped with infrared seekers, while radar systems are used on missiles of other classes.

Thus, most likely we are talking about a medium-range missile, capable of hitting targets at distances of tens of kilometers. The exact type of GOS is unknown, and therefore it is unclear whether the rocket can operate on the basis of the "launched-forgotten" principle.

New rocket for a new plane

The foreign press primarily drew attention to the reduced size of the rocket. This peculiarity is associated with the development of Russian aviation, namely, the need to use the fifth generation Su-57 fighter. In order to reduce visibility for radars, this aircraft can carry weapons in the internal cargo bay. They have a limited volume and impose certain requirements on the dimensions of weapons.

General view of the product. Twitter.com/RupprechtDeino
Judging by the available data, the new missile will be able to be transported in all Su-57 cargo bays. It will freely enter both the main compartments placed on the axis of the aircraft, and the side, differing in smaller sizes. Thus, the promising fighter will receive new weapons combining high combat qualities and ease of operation.

In favor of the version of the application on the Su-57 speaks the very logic of the development of weapons and equipment for the aerospace forces. The fifth generation fighter has already gone into series, and therefore all new weapons must be created taking into account the use on it. At the same time, one should not forget compatibility with other aviation equipment.

In the context of armaments, the Su-57 needs to be remembered news recent years. At different times and at different levels, it was argued that in the framework of the PAK FA program, almost a dozen new aviation weapons of all classes are being created for a promising aircraft. Apparently, one of them is the recently shown rocket from the Vympel GosMKB.

Conclusions from the photograph

Thus, a few days ago by chance (?) Very interesting news about the development of promising weapons became known. For the first time they showed a promising air-to-air missile. Its characteristics and capabilities can be represented, but official data of this kind has not yet been published.

However, it is clear that the new missile will be able to supplement the existing nomenclature of weapons of the aerospace forces and give certain advantages. In addition, it should become the most important tool for fighters of the last generation - as well as for older equipment.

Since the new model has already been shown to representatives of the authorities, and at the same time to the public, it can be expected that they will soon be told more about it. However, the timing of the official disclosure of data remains unknown. The characteristics of the rocket can be published the other day or postpone these events to future military-technical exhibitions.

In general, the latest news recalls that domestic industry continues to develop promising aviation weapons of all classes. The positive consequences of this are obvious - in parallel with the technology of the new generation of VKS, they will receive the most modern means of destruction.