A meeting between Putin and Trump would be futile. Why? 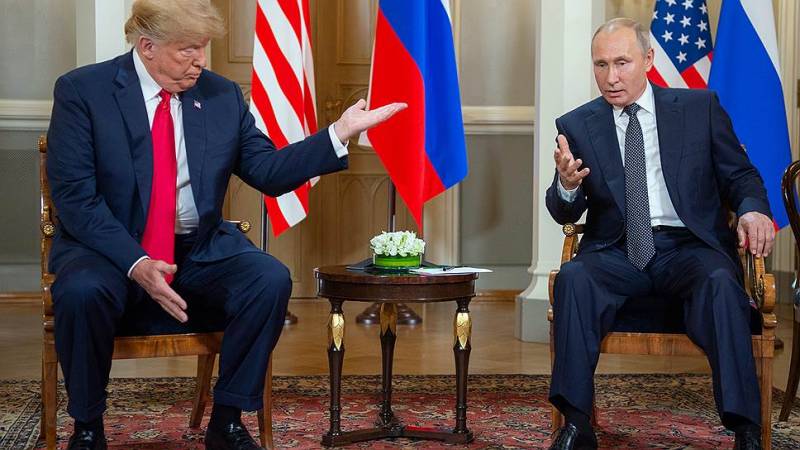 Recently, much has been said and written around the world about the possibility of organizing a meeting of the presidents of the two great powers: Russia and the United States. At first glance, Vladimir Putin and Donald Trump really have something to talk about. But many politicians in both Russia and the USA consider such a meeting pointless. Let's try to figure out why.

APEC summit in Chile canceled: protests are to blame

The Asia-Pacific Economic Cooperation Summit, which was planned to be held in Chile on 16-17 on November 2019, did not take place. This is due to mass unrest in the Chilean capital and a number of other large cities. Chilean citizens took to the streets to protest against rising metro fares, as well as demanding higher salaries and lower fees for medical and educational services.

The riots in Chile have reached such proportions that the country's authorities were forced to abandon the APEC summit, and it was during the summit that Donald Trump and Vladimir Putin met. The last time the heads of the two leading powers of the world met in Osaka at the G20 summit. Therefore, it is now not very clear where and when the two presidents will be able to talk again.

However, Russian leaders doubt that this meeting is necessary at all. As the experience of the previous meeting showed, it did not lead to any serious consequences and large-scale changes. Moreover, after the last meeting between Putin and Trump, relations between the two states even worsened, although there were no conflicts at the meeting. But followed by the cancellation of a number of important treaties, harsh statements from the American administration.

Apparently, that’s why Vladimir Putin announced in mid-November of 2019 that he was not planning a meeting with his American counterpart. If the head of state speaks about this, then there really will not be a meeting, and this is a mutual decision. It would be unlikely that Moscow would have opposed the conversation between the two presidents, if such a proposal were made by representatives of the American administration. So, even if the APEC summit has not taken place, the meeting of the heads of state has not only been postponed to some longer term, but generally has very uncertain prospects. Maybe when they meet, maybe not.

However, the press secretary of the Russian president, Dmitry Peskov, has already managed to refute the information circulated in the Russian mass media that the Kremlin is skeptical about meeting with the American president. But from this refutation, the meeting, by itself, will not take place and will not even come close. And there are reasons for that.

One of the main reasons that the meeting of the two presidents meets a similar attitude on the part of both the Russian and the American leadership is the lack of a real opportunity for Trump to change US foreign policy. Donald Trump is known for his loyal attitude to Russia and respect for Vladimir Putin, but even with the great powers that the US president has, he is not able to completely change the course of American foreign policy.

The real situation is such that the focus of US foreign policy is determined not by the president, but by the groupings of the American establishment. Now hawks are particularly influential in Washington, among which are quite radical, such as the recently resigned National Security Advisor to US President John Bolton, and more moderate ones like Secretary of State Mike Pompeo and his entourage. 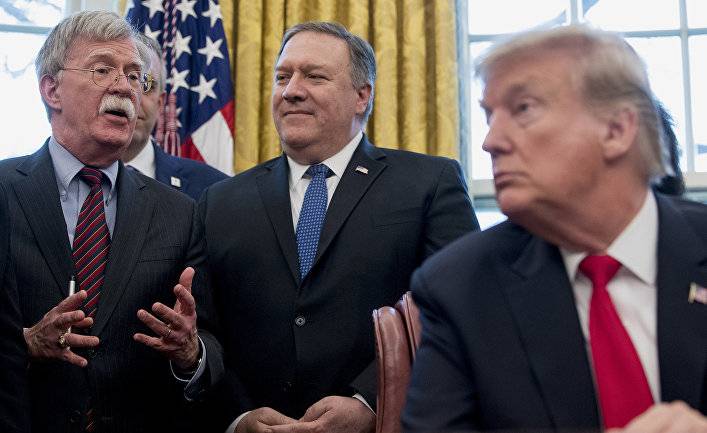 For hawks, Russia has always been historical enemy, to which it must be treated appropriately. So, they welcome Kiev’s policy of confrontation with Moscow, advocate maintaining a military presence in Syria and other countries, constantly inventing various reasons for new pressure on Russia and the introduction of new sanctions. Of course, the “hawks” are also characterized by a course towards an arms race, the abolition of existing agreements on control over them.

Trump, of course, himself can hardly be called a peacemaker, but at least he had a rather non-trivial program. In particular, Trump advocated the withdrawal of American troops from Afghanistan, Syria and other states, for the reduction of military and financial assistance to Ukraine itself, since, as a businessman, he is primarily concerned with the financial and economic prosperity of the American state itself.

Trump is not going to give away budget funds to other countries or spend them on the maintenance of American soldiers helping Kurds or Afghans. But the American president’s entourage thinks differently and, whatever Trump has his personal views, he is forced to listen to the opinions of his entourage and do what the representatives of the American political elite dictate.

By the way, there are quite influential supporters of Trump's meetings with Putin in the Republican Party. This is part of the same "hawks" that adhere to the "old rules" and believe that the American president should personally communicate with the Russian, and very sharply, almost challenge him. Such an act of Trump, in their opinion, would help to increase his rating. But Trump himself is not going to openly quarrel with Putin, because he understands that in the future such an act will most likely negatively affect not only the United States, but also his own image.

Probably, including for these reasons, a year ago, during the meeting of the G20 in Buenos Aires, Trump already refused to meet with the Russian president - he did not want to substitute and go on about the instigators. The meeting did not take place then, although in reality the presidents had something to talk about.

In addition to the “hawks,” which directly influence the Trump administration’s policies, making up if not the majority, then a very significant part of senior officials, opposition leaders from the US Democratic Party are also pressing on the American president. The American Democrats cannot forgive Trump's victory over Hillary Clinton, so almost immediately after Trump became president, the Democrats launched a powerful campaign against him. Perhaps, none of the modern presidents of the United States has encountered such pressure from the opposing party. 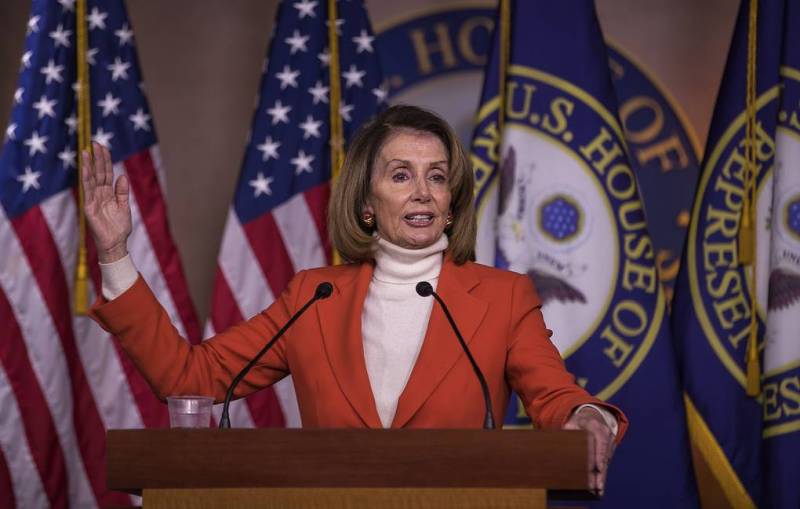 Democrats are convincing Americans that Trump became president because of some foreign interference in the American election, although the facts of the interference themselves over the years have not been able to prove. Trump and his entourage are accused of almost collaborating with Russia, again - without proof. But, as the Democrats return to the topic of the president’s allegedly pro-Russian sentiments with enviable regularity, any productive meeting between Trump and Putin will have corresponding consequences.

Imagine that Trump met with the head of the Russian state and after this meeting made some fateful decision normalizing relations between the countries. What will the Democrats do first? They will accuse Trump of being a Russian agent, that he always worked for Putin anyway, that Russia's interests are above American interests for him. Trump, after all, is threatened with impeachment, and any step that would allow him to be criticized again will have very painful consequences for the president.

Many American media, including the famous The New York Times in the forefront, are now campaigning against Trump, the essence of which is to replicate the opinion of a certain relationship between the president and Russia and the Russian leadership. Allegedly, the Russian special services control the activities of Trump and even a significant part of the entire Republican Party of the United States, using them in their interests. Naturally, such a position is beneficial to the US Democratic Party, which expects to push through its candidate in the upcoming presidential election.

The main goal of the Democrats is to undermine the confidence in the Republicans as much as possible, and ideally to drive out their most powerful and dangerous candidates, including, of course, Donald Trump himself, from the election race. And in the case in this case are any accusations, sometimes even the most ridiculous ones, which will seem absurd to the "savvy" voter.

Even when it became known that this was not Russia, but Ukraine showed a special interest in the American elections, since the democrats who favored him wished for victory in Kiev, the media controlled by the US Democratic Parties nevertheless declared: the version of the Ukrainian trace in the American elections was thrown by Russian special services and beneficial to Russia to prevent hated democrats.

Given that the average American voter is a layman who is very superficially versed in politics and poorly understanding all the nuances of political battles even in his native country, not to mention Russia or Ukraine, he easily believes in the word “authoritative” media and can their influence to change their political sympathies and preferences. In the next election, such a layman will vote for a candidate from the Democratic Party, because he allegedly "did not sell out" to Russia, and then the farce will be repeated, but exactly the opposite.

This is what the Democrats are seeking, deliberately discrediting Trump. And, of course, against such a background, Trump's frequent meetings with Putin would, with the light hand of the American Democrats, be another proof of the imaginary connection existing between them. Trump understands this very well and does not want to be reprimanded once again for “working for Russia” and, in general, in any way harming his political image on the eve of the next presidential election.

As for Moscow, it doesn’t make much difference whether the Russian president will meet with the American president. Gone are the days when “friend Boris” was trying to impress “friend Bill”. Then Russia, which was almost under the external control of the American administration, really was dependent on the White House, and the meetings of the presidents were relatively regular. 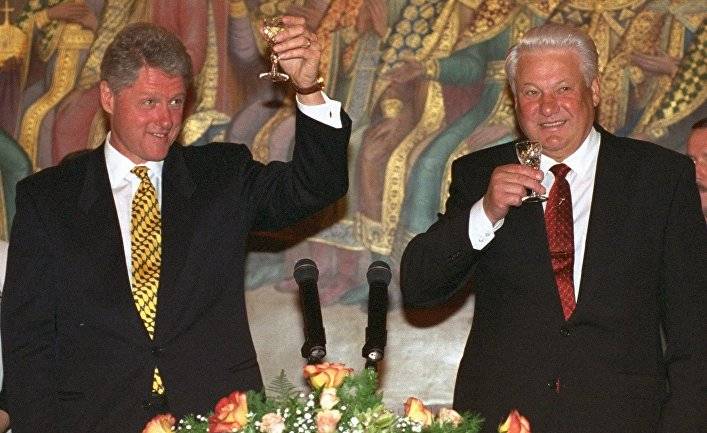 Today, everything has returned to normal: Russia and the United States have again become the main competitors in the world political arena and meetings between the heads of two states can be more ceremonial. Real decisions are, of course, not made at meetings. Accordingly, the need for such meetings is very illusive. Yes, you can amuse the public by showing that Trump and Putin exchanged common phrases, took pictures together and shook hands, but you can do without it.

Thus, a meeting between Putin and Trump will take place or not, this will not affect the world politics and the position of both great powers. Therefore, they are so calm in the Kremlin and the White House to cancel the APEC summit in Chile and do not make forecasts for the future.