Russian global project and the restoration of the Russian empire 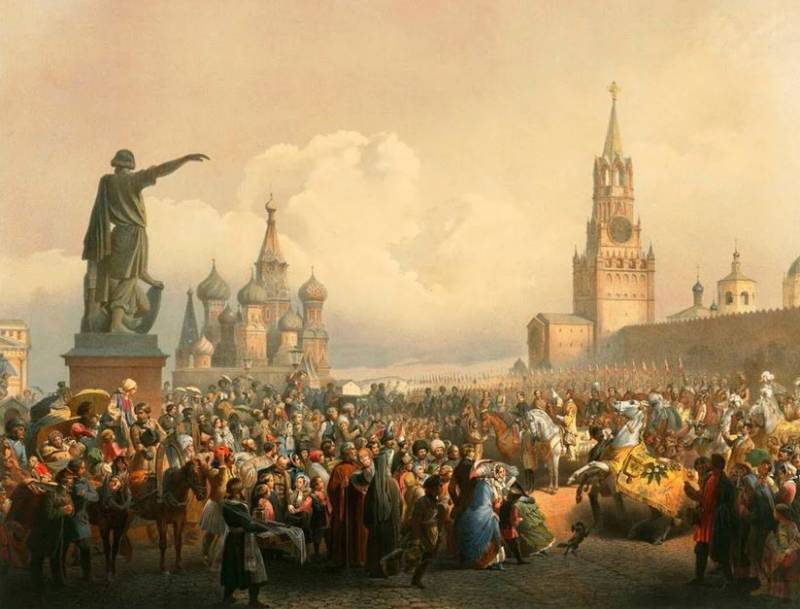 Until recently, Russia was one of the two world superpowers and is slowly reviving its power. At its core, it is an imperial power and cannot exist otherwise. All история Russian states - these are cycles of expansion and contraction along their borders. The increment of the territories was carried out not by capturing colonies on distant continents, but by integration processes along the border with other peoples without assimilation and the desire to preserve the identity and lifestyle of the peoples attached to the empire.

The principles of the formation of the Russian empire

Russia has always been a kind of empire, the metropolis did not plunder its provinces, but on the contrary developed them using the resources of the metropolis. This allowed the formation of a powerful Russian civilization, fundamentally different from the western one, which was based on completely different mental values.

The basis of Russian civilization was Orthodoxy, and this is no accident. The way of life and lifestyle of the Russian people was communal in nature on the basis of collectivism, contributing to the unification of individuals in the development of the principles of their living arrangements. Orthodoxy responded to the collectivist aspirations of the population and contributed to the consolidation of society, in which public interests prevailed over the interests of the individual.

So, over time, two Christian civilizations have developed with different fundamental principles and aspirations, the Western became the heiress of the Roman Empire with Roman law, individualism and the desire to conquer and assimilate other peoples, and the Russian accepted the legacy of the Byzantine Empire with a communal system and the desire not to conquer, but incorporate others peoples with the preservation of their traditions, culture, religion and way of life. Attempts by the Russian elite in different historical periods to integrate Russia into Western civilization did not receive support in society and ended in failure. We are too different to live together.

In connection with the fundamentally different civilizational codes and civilizational values, between the two civilizations there has always been a rivalry for influence in the world and a tough confrontation, often resulting in bloody wars, hence the desire of the West to subdue an obstinate opponent by any means.

The rivalry sharply tightened with the creation of the Soviet empire, the basis of the state ideology of which was put communism, which did not take root in the West. Communism was based on collectivism, not perceived by individualistic Western society, and found fertile ground in Russian society, which offered the peoples a more attractive alternative to the world order.

With the collapse of the Union, the outlying peoples of the empire began to scatter in their national corners. Instead of the imperial ideology of communism, all suburbs were swept by local wretched nationalism, which everywhere led to the degradation of small-town statehood and the impoverishment of peoples. In Russia, no matter how they tried to impose nationalism, he did not take root, since the Russian people are imperial in their spirit, nationalism is too small for him and limits his desire for scope and space.

Russian civilization entered a protracted contraction cycle, the society was not offered a new imperial idea, and Russian statehood also began to degrade and lost attractiveness for its former suburbs. With the assertion of a Putin team with clearly imperial views and interests, Russia began to gradually revive and regain its strength. Western rivals didn’t like it right away and they started a war to discredit Russia and limit its development and expansion opportunities. This was especially evident after the Sochi Olympics, the coup d'état in Kiev and the Skripal case, when they no longer even looked for reasons to accuse Russia of hegemonism and extremism.

After the collapse of the Soviet empire, Russia's forces were seriously undermined, it lost significant territories, and imperial power and influence can be restored only with the return of these territories. Return them by force weapons no one is going to, although Russia has sufficient military power for this, but such actions are fraught with serious complications and international isolation. Former Soviet suburbs themselves should want to return to the fold of Russian civilization, and for this it should become attractive to them in the political, economic, military and humanitarian aspects. All this only confirms that Russia will have to implement its integration project to return the former Soviet republics.

The revival of the Russian imperial project

Russia simply cannot fail to have such a project, since four centers of power have now formed in the world: the USA, the European Union, China and Russia. All of them are implementing their integration projects competing with each other. Moreover, all the projects of Russian competitors cover the territories of the former Soviet republics, which are the sphere of Russian national interests. In this regard, Russia's delay in promoting its integration projects on previously lost territories may lead to the development of them by other centers of power and their integration into other, it is possible that hostile integration associations. In this case, Russia may lose the opportunity to return them in the future, and, weakened, will itself become the prey of other centers of power in the form of a raw materials appendage.

For the successful implementation of the Russian integration project, first of all, it is necessary to return to Russia the status of an economically powerful power and ensure industrial, financial and commercial expansion into neighboring territories, without which there can be no question of imperial power.

In recent years, Russia has been working hard in this direction in Russia, financial resources are accumulating, large-scale infrastructure and industrial construction has been launched, and the country's economy is starting to move away from raw material dependence. Russia is slowly getting up from its knees and is preparing for a tough defense of its national interests. I would like more, but even in the Russian elite, the pro-Western liberal wing resists the integration of post-Soviet countries and seeks to draw Russia into Western civilization in its selfish interests. Western countries are doing everything possible to restrain Russian integration processes, arranging provocations and coups in post-Soviet countries and imposing their puppets in power there.

Integration of Ukraine and Belarus

It should be noted that two post-Soviet Slavic states, Ukraine and Belarus, play a dominant role in the Russian global project, and without their return there can be no question of a revival of Russian civilization. Their loss inflicted tremendous damage to Russia and actually destroyed Russian civilization.

The West has advanced farthest in Ukraine, with the help of the comprador Ukrainian elite, it has led Ukraine out of Russia's sphere of influence, created an anti-Russian foothold on its territory, provoked a civil war in the Donbass and, by imposing large-scale sanctions against Russia, is trying to weaken and isolate it.

The Russian leadership, having lost to the West the first round of the struggle for Ukraine, is now trying, with the help of the Minsk agreements, to prevent Ukraine from finally leaving for Western civilization. In this regard, Russia does not recognize the independence of Donbass, it is needed as a Trojan horse for the destruction of the neo-Nazi regime in Ukraine from the inside and as a locomotive for the return of Ukrainian society to its native land.

Donbass will never enter Ukraine under the terms of agreements. With the help of the Minsk agreements, it will only be possible to recognize its international subjectivity, and it should become the second alternative Ukraine, which will seek to eliminate the neo-Nazi Kiev regime and unite most regions under Donbass banners with further reintegration into Russian civilization.

Not everything is simple with Belarus either, the Belarusian elite led by Lukashenko is against integration, because he is afraid of losing his power. In order to “admonish” Babich was sent to them, who lucidly explained to them what was expected of them and how the resistance to integration could end. They were given a little time to think, after which, apparently, it was not persuasion that would begin, but real integration processes.

The return of the entire post-Soviet space

In addition to the Slavic republics, the integration of Transcaucasia, Central Asia and Moldova should be solved, but this is the next stage of integration, first of all, the problems of the return of Ukraine and Belarus should be solved. Russia did not recognize the independence of Abkhazia, South Ossetia, Transnistria and Donbass; in the long run, it does not need the scribbles of premature states, but the entire post-Soviet space. This is a difficult and long journey full of trials and tragedies for the inhabitants of these regions, but it will have to be completed.

Russia is approaching the next expansion cycle, and the process of reintegrating the post-Soviet space and implementing the global Russian project requires long-term strategic actions to prepare the former Soviet republics for integration into Russian civilization. You can’t do without a radical upswing in the Russian economy and the creation of an attractive image of Russia, as well as targeted actions in the international arena to justify and promote Russian national interests in the territory of the post-Soviet space.