A promising UDC for the Russian Navy: are there reasons for optimism? 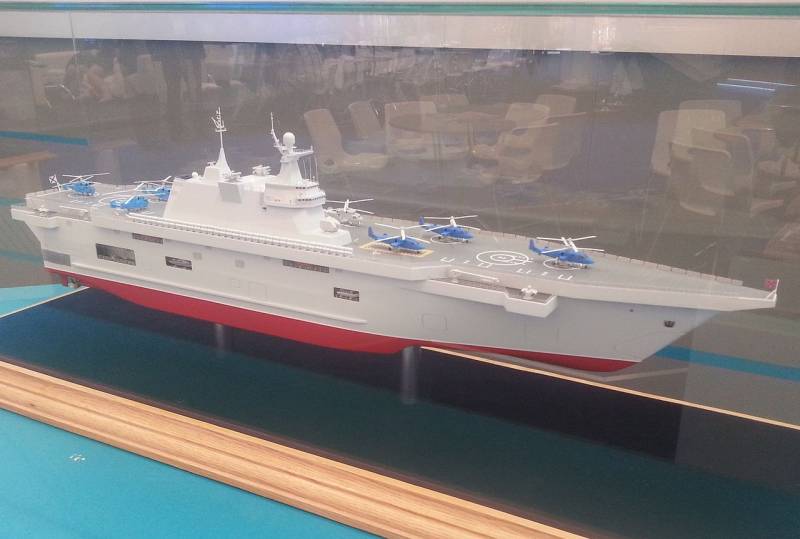 One of the layouts of UDC, demonstrated at exhibitions

For many years now, the topic of building promising universal landing ships (UDC) for the Russian Navy has been discussed. According to reports of recent months, next year a similar program will start, as a result of which the fleet will receive new pennants with special capabilities. Most of the information about such construction has not yet been disclosed, but the press publishes certain details that give reason for optimism.

The possible plans of the Ministry of Defense for the next year became known in September. 11 September TASS, citing sources in shipbuilding, spoke about future construction. The construction of two UDC is planned. The laying of the ships will take place in May 2020 at the Zeriv factory in Kerch. The lead ship will be handed over to the customer until the end of the current state arms program, i.e. until 2027 inclusive.

TASS also reported approximate characteristics of the ships. Their displacement will reach 15 thousand tons. They will be able to carry more than a dozen helicopters of different classes, and a docking chamber for landing and landing equipment will be provided in the hull.

At the time of the appearance of such newsas stated, the design of the new UDC was underway. Over the next few months, it was planned to sign a construction contract.

A few days later one of the leaders of the Ministry of Industry and Trade confirmed the availability of work on the subject of UDC. The creation of such ships is indeed included in the State Arms Program. Work on the project went according to plan.

Soon it became known that the Zaliv factory was really working on the possibility of its participation in the shipbuilding program. However, details were not followed.

On November 17, TASS received a new message about the UDC project. According to unnamed sources, the Navy gave the industry a tactical and technical task for a new project. The new TTZ provides for obtaining characteristics that are noticeably different from those previously called. Ships will be larger and can carry more aviation group.

The length of the new UDC will reach 220 m, displacement - 25 thousand tons. The flight deck and deck below the hangar will be able to provide the work of more than 20 heavy class helicopters. Up to 900 paratroopers - two reinforced battalions of the marine corps can be accommodated in the cockpits. Other data has not yet been published. In addition, the announced information again did not receive official confirmation.

So far, not much is known about future UDC planned for laying on the Gulf. Moreover, data from different sources contradict each other. As a result, all the most known information remains unknown. In particular, the number and code of the project accepted for implementation are unknown. Accordingly, it is impossible to determine and evaluate the tactical and technical characteristics of future ships. 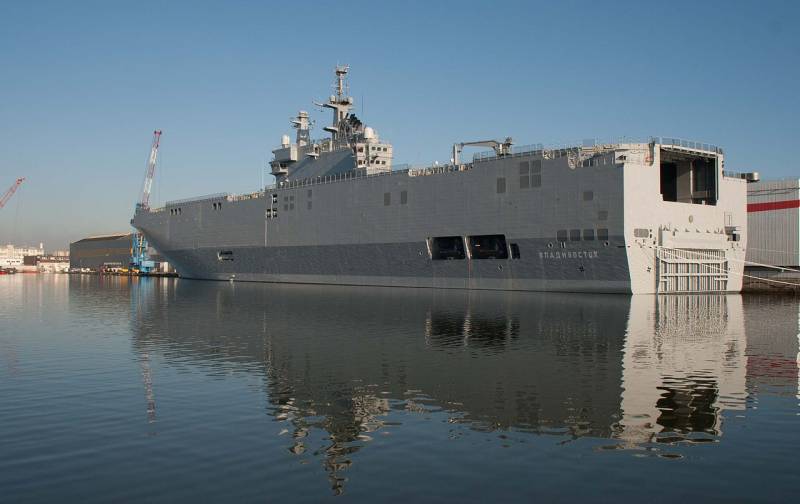 UDC "Vladivostok" Mistral Ave. - the ship was not transferred to Russia
However, in recent years, the topic of UDC has been raised with enviable regularity, and concept projects from domestic shipbuilding organizations have gained wide popularity. Probably, in the context of future construction, they are talking about one of them - although it is not clear which one.

The first version of the promising UDC several years ago was proposed by the Nevsky Design Bureau. A ship 165 m long with a displacement of 14 thousand tons was proposed, capable of transporting a battalion of marine corps with armored vehicles, as well as landing boats in the docking chamber. About 10 helicopters could operate on the flight deck.

Also, the Krylov State Scientific Center presented its version of UDC called “Surf”. Such a ship should be longer than 200 m and have a displacement of 24 thousand tons. In the cockpits, it was planned to place 500 paratroopers, on cargo decks - up to 50 units of armored vehicles. The docking chamber could accommodate up to six boats. Hangars and a flight deck were designed for 16 transport or combat helicopters.

In 2018, KGNTS announced the improvement of its project. It was also reported that the construction of such ships was laid down in the new State weapons program, calculated before 2027. No new information was received on the Nevsky Design Bureau project at that time.

It is easy to see that the UDC was featured in September messages, similar in design to the Nevsky Design Bureau in terms of displacement and other characteristics. The latest news mentions a heavier ship, similar to the Surf designed by KGNTS. What is the reason for such a difference in publications and in data from sources in industry is not known. She can find various explanations.

In recent months, there have been a number of reports about the construction of the UDC, but only a few news were announced by officials and not media sources. The inclusion of UDC construction in the current state armament program has been confirmed. Direct construction should begin in 2020 or a little later. The first ship of a new type will be handed over to 2027, and the second will begin service at the very end of the twenties.

Officially announced the preparation of the Zaliv plant for participation in future construction. This enterprise has significant production facilities and can build large-sized ships. Workshops and a dock ensure the construction of orders up to 300 m long and up to 50 m wide with a displacement of up to 150 thousand tons. This is enough for promising UDC.

It is to be expected that in the coming months there will be new reports on various stages of the shipbuilding program. It is expected to sign a contract for construction, preparatory work and laying the lead ship of a new type. Obviously, all these activities will be accompanied by the disclosure of new data.

What does the fleet want

Since 2018, it has been repeatedly reported that the approval of the Navy fleet received the concept of UDC development of the Krylovsky center. Recent reports indicating approximate characteristics of the planned to bookmark the ship, partially confirm this information. 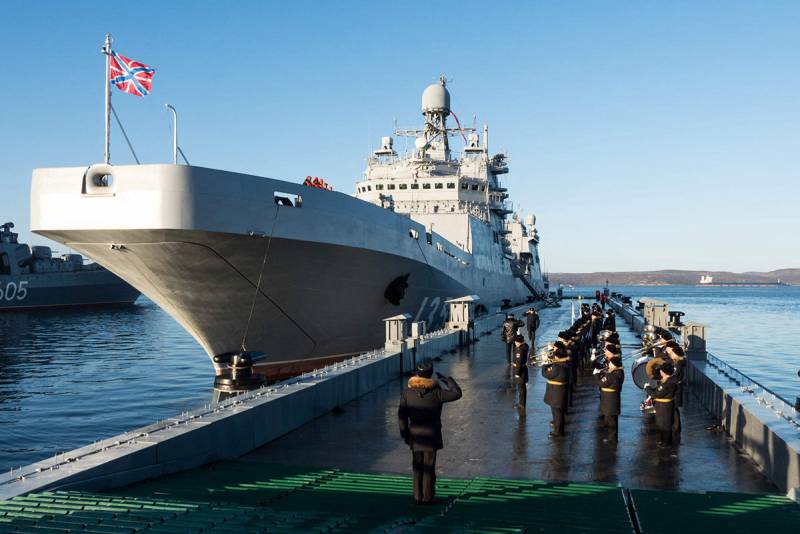 BDK "Ivan Gren" Ave. 11711 - the newest landing ship of the Russian Navy
Thus, for the Navy there will be two ships with a displacement of 25 thousand tons with the possibility of transporting 900 people, 50 armored vehicles, several boats and at least 16 helicopters. The weapons complex should include several types of anti-aircraft weapons and, possibly, large-caliber artillery. Impact systems are not used.

If we are talking about the Surf project, then UDC will get all the necessary features. In particular, the design of the ship will provide for landing directly from holds on an unequipped coast; over-horizon landing is also possible.

The expected Russian UDC in its characteristics and capabilities will be close to modern foreign models. So, there may be some similarities with the French ships of the Mistral type, which almost entered the arsenal of the Russian Navy. At the same time, significant differences may be present that determine other combat and operational qualities.

The news of recent months on the construction of promising UDC shows that the Russian command has decided on plans. Such combat units are needed by the fleet and should be enlisted in a few years. So far we are talking only about two UDC, but in the future a new order may appear.

It should be noted that the Navy could get its first UDC back in 2015. However, the transfer of two ships of the Mistral project was disrupted at the initiative of France. Against this background, active work began on their own universal landing ships, the result of which in a few months will be the laying of two orders. A few years later, the finished UDCs will enter the fleet.

The events of recent years give rise to cautious optimism. The rupture of the Russian-French treaty on the Mistral could adversely affect the development of landing forces. However, the necessary measures were taken, and our industry created its own model for a similar purpose. The situation is gradually changing for the better. Though late, but the Navy will receive the required ships.

We are in Yandex Zen
Submarines in the new state armaments program
"Svetlana". History of creation
87 comments
Information
Dear reader, to leave comments on the publication, you must to register.