The bustle around the Katran, or Noise and nothing 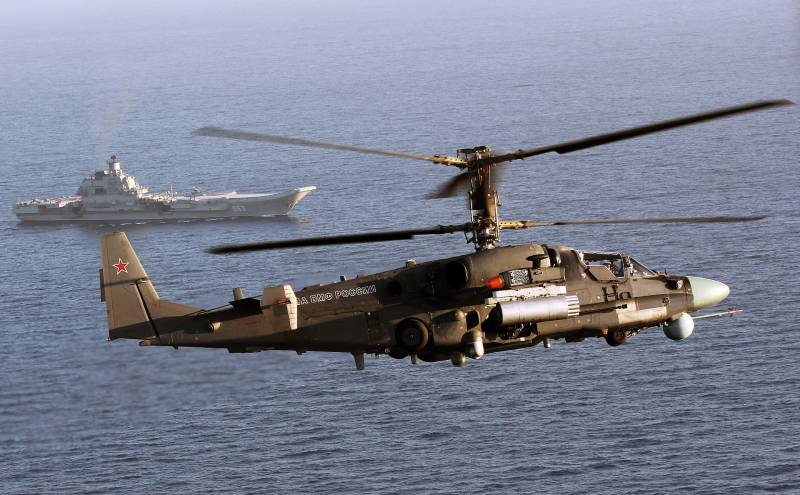 All according to the laws of the genre. Or show business. If they begin to forget about the star, a scandal must be made. Our hero is not a star at all, because scandals are not needed, but some media with a light feed of the same “Star” suddenly started talking.


It would seem, who needs it?

But at the Dubai Airshow 2019 air show held in Dubai, the head of our Rostec Mr. Serdyukov for some reason mentioned the Ka-52K.

Mr. Serdyukov did not say anything new, with the exception of confirmation that the purchase of Katrans was planned in the GPV (state arms program) for 2018-2027. And work on the Katranas, which, by the way, this year nevertheless completed the test program (quite successfully), will continue.

There is only one question: why? “Cui prodest,” as the ancient Romans used to say. Who benefits?

That's who benefits, it is completely incomprehensible.

Nobody needs a helicopter, which was rather quickly constructed in Kamov Design Bureau. Here to absolutely no one. With the exception of Egypt, which went to the ill-fated Mistral, for which Katran was being developed.

So the "Katrana" for Egypt is the only ray of light, then, sorry, darkness. 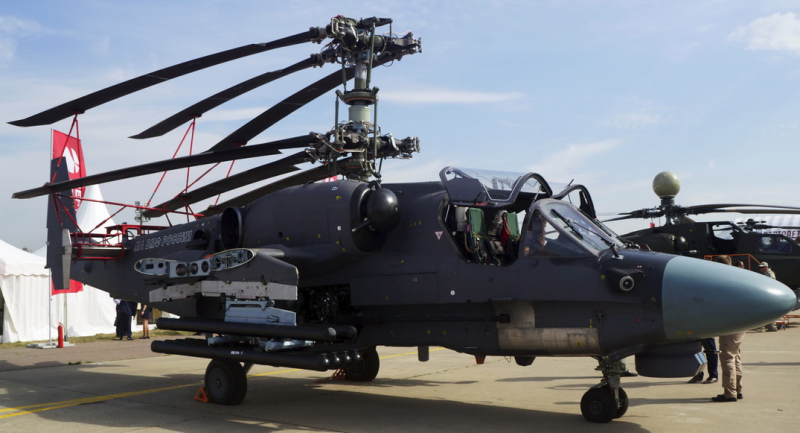 To quote Serdyukov:
“Let me remind you that four prototypes of the Ka-52K were made, which are now at the Kamov base and are ready to continue testing. But we need carriers that are not yet defined. ”

Media not defined. This is where it all ends. The point, and so bold ...

Well, the head of Rostec reminded us that we have a ship version of the Ka-52. The sense of this is zero, and complete. Just because there are two ships so far, and they are not Russian, which can carry the Katrana.

Egyptian ships and carry. There are no more carriers and is not expected in the near future.

Someone may say that the Ka-52K can be used on other ships and for other purposes. Good. At one time, colleague Kirill Ryabov quite clearly covered these nuances here:

Because just a quote from Ryabov:

“During the tests of September 2011, the Ka-52 helicopter landed on the aft platform of the large anti-submarine ship Vice Admiral Kulakov (project 1155). Established aviation BOD group, project 1155 consists of two Ka-27PL anti-submarine helicopters. For storage and maintenance of this equipment, such ships have two semi-sunken hangars in the aft superstructure. The well-known information on the dimensions of the Ka-27PL and Ka-52K helicopters suggests that the Katran is quite capable of fitting in the BOD hangar, pr. 1155. "

And one single question: why?

Why a large anti-submarine ship helicopters (two) Ka-27PL (anti-submarine equipment), is understandable. The ship fights with submarines, and here a long search arm in the form of helicopters is quite good for itself. 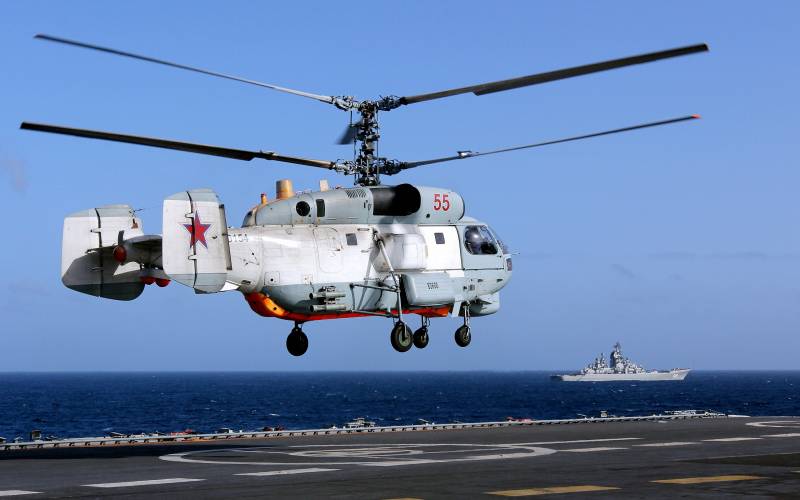 The Ka-27PL has everything that is needed for this, namely the Octopus, a search and sighting system that is able to detect a submarine at a depth of 100 meters from a very decent distance of 8-15 km.

The "Octopus" consists of the Initiative-2KM radar in the nose of the fuselage and the lowering sonar station VGS-3 ("Ros-V") located in the rear of the fuselage.

For the destruction of submarines there are anti-submarine torpedoes AT-1MV, APR-23 missiles and anti-submarine bombs of the PLN caliber 50 and 250 kg.

That is, the ship is equipped with two helicopters capable of finding and if not destroying an enemy submarine, then significantly complicating its work in the area.

Katran has none of this.

This is an ordinary army land helicopter, equipped in exactly the same way as its simple Ka-52 counterparts. Even the RLK "Crossbow" is the same.

In general, this is an attack helicopter for work on land targets. And despite the fact that it can be pushed into the BOD hangar, there is absolutely nothing for him to do there. 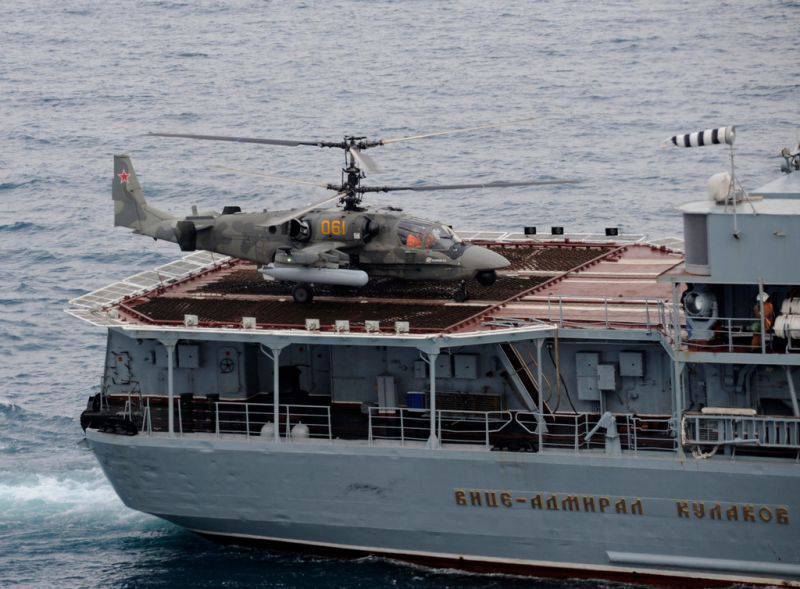 What awaits the Katrana?

Yes, nothing awaits them. This is a helicopter that was created for two (okay, four in a very distant future) assault landing ships. We do not have these ships and will never be now.

Issued copies, which began to be built by the arrival of the Mistral, of course, must be transferred to the service. In fact, the helicopter differs only in folding units, and this is exactly the same Ka-52. So - definitely not in vain collected.

Plus it will be easier to transport, at least some plus. 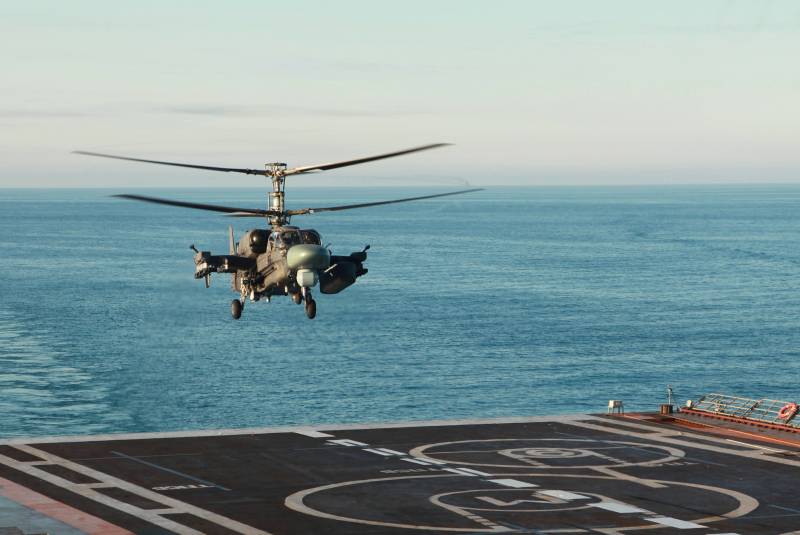 I must say that this is normal practice in the world. It seems that it seems beautiful weapon "Does not fire."

As an example, I would immediately like to bring the Belgian assault complex FN F2000.

Polymers in the design, a plastic easy-to-remove forend, in place of which various additional modules can be installed: a laser target designator, a flashlight, an 40-mm grenade launcher, a non-lethal M303 module designed for firing capsules containing paint or tear gas, a shotgun barrel and much more . 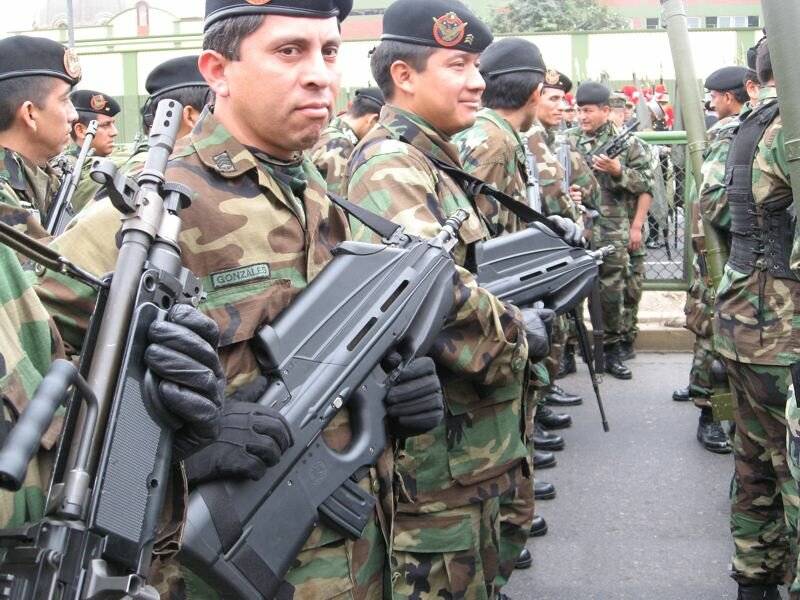 But he didn’t look at anyone. Either the complexity of the design (although both right-handed and left-handed people can work), or the price ... As a result, a miracle complex was bought by 9 countries, and even then bought more at retail, to equip professionals from special forces. 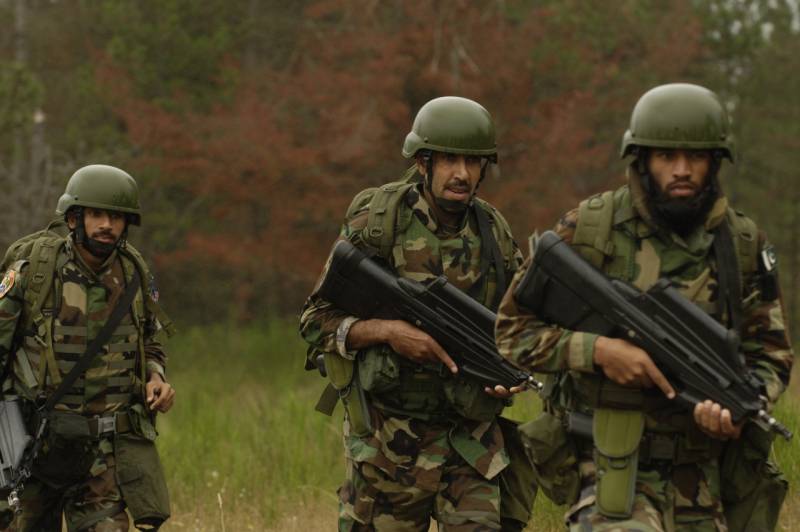 Yes, the purchase by the Saudis of a huge party for their National Guard is not an indicator. It is known in Saudi Arabia that there is nowhere to go, but where is a good army and where are Saudis?

The same thing will happen with Katran.

Maybe someone will take it. Because Serdyukov and reminded. We have something to offer if you are interested. But Ka-52K simply does not have a future, because there are no carriers for it. And apparently, it will not.

So the fate of Katran is to be a regular at exhibitions and salons as an export ship variant of the land strike Ka-52.

But there is nothing sad or terrible about this. It just didn’t work out the project with the Mistrals, that’s all. If even the Ka-52 as a model was discontinued because of this, then yes, it would be an unfortunate fact. And so - the matter is through and through ...