On the initiative. New UDC project for MCC Japan 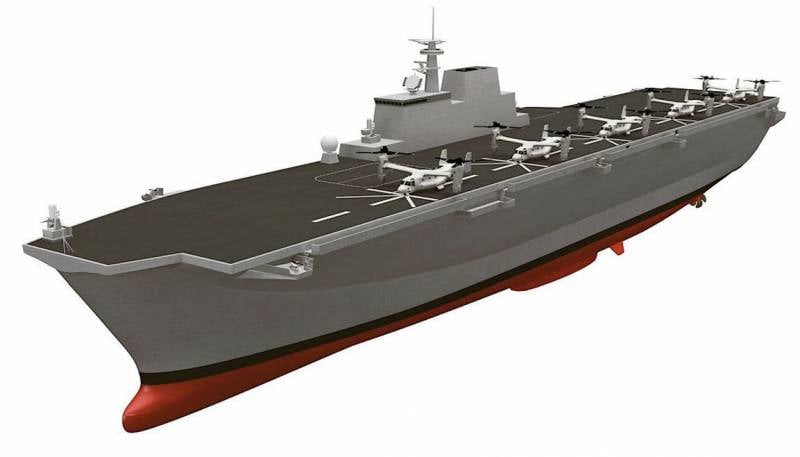 General view of the proposed ship

At the moment, Japan’s naval self-defense forces have only three Osumi-class universal landing ships built in the 1995-2008. The command considers it necessary to supplement them with new ships, and Japanese shipbuilders are already taking the necessary measures. The other day, the shipbuilding company Japan Marine United presented its new UDC project, developed on an initiative basis.

Pictures from the exhibition

This week, the next DSEI arms and equipment exhibition was held in Chiba, during which Japanese and foreign enterprises showed already well-known and completely new developments. The shipbuilding company Japan Marine United (JMU) this time showed layouts and materials for several projects. The most interesting is the promising UDC for Japan MSS.

The project is being developed on an initiative basis and without a direct order from the Japanese command. While it is in its early stages, and the construction of a finished UDC can only begin in the distant future. As a result, the exhibition showed only promotional materials with general views and characteristics of the ship.

The project does not yet have its own name. For its designation, the abbreviation FLHD (Future Landing Helicopter Dock - "Perspective Helicopter Dock") or LHD is used.

In the foreseeable future, JMU will propose a new project to the maritime self-defense forces. They will determine the need for such ships and, in the case of a positive decision, will evaluate the number of UDC for construction. However, the real prospects of this kind are still unknown.

According to published data, the FLHD project proposes the construction of a typical universal landing ship with all the features inherent in this class. A large ship capable of transporting and supporting the operation of helicopters, land / amphibious equipment and boats will be offered to the customer. 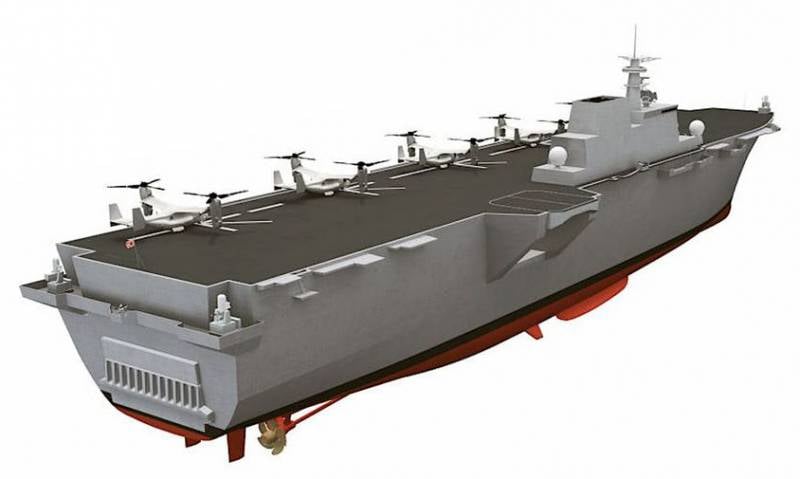 According to the project, the UDC has a length of 220 m with a maximum width of 38 m and a draft of 7 m. The normal displacement is 19 thousand tons. The ship should have a flight deck with a superstructure of minimum size. The internal volume of the hull is given under the cockpit for the landing, the deck for equipment and the dock chamber for boats. An unnamed type main power plant will provide movement at speeds up to 24 nodes.

Like foreign counterparts, LHD will be able to transport a battalion of marine corps, along with standard equipment and landing and landing equipment. The interiors are designed for the transportation and accommodation of 500 people, including the crew of the ship.

The flight deck is designed to serve five helicopters or convertiplanes. Under it is a hangar deck with two rooms for five rotorcraft. Two elevators are provided for moving equipment to the deck and hangars, one in the center of the deck and the other on the starboard side of the hull.

The cargo deck, located in the bow and central parts of the hull, can accommodate up to 20 marine armored vehicles, depending on the tasks and type of equipment. The loading of self-propelled equipment is carried out on its own along the ramps. Unloading is carried out on the pier on its own, on landing boats in the docking chamber or directly on the water - in accordance with the plan of the landing operation.

The aft of the hull is given under the dock chamber of considerable size. It can simultaneously accommodate two boats of the LCAC type or other equipment of similar sizes. Entrance and exit from the chamber is carried out through the aft gate with a folding ramp.

The main task of the prospective UDC will be the transportation of personnel and equipment of various types. It also provides for the use of the ship in humanitarian operations. To solve these problems, it is proposed to deploy a field hospital or place other special equipment in the cargo compartments. Significant internal volumes can be used to transport various cargoes. 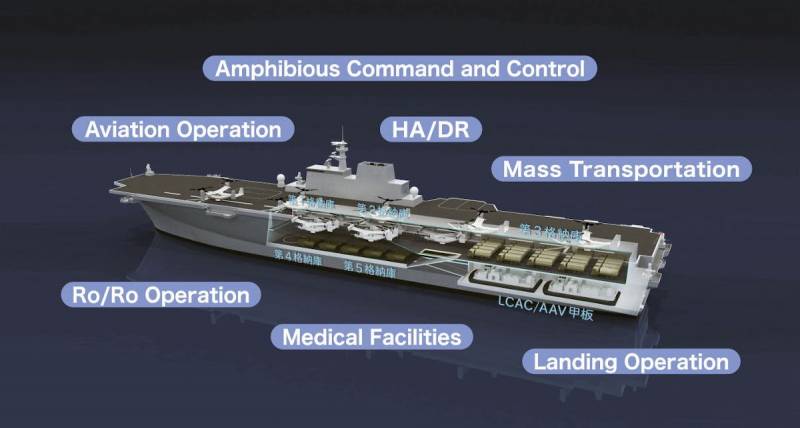 Key Features of LHD
The non-military use of UDC can be of great interest to the MSS. Japan regularly suffers from natural disasters, and the Self-Defense Forces are involved in helping the victims. A helicopter docking ship capable of transporting cargo, carrying equipment for various purposes, and even serving as a headquarters and field hospital, will be very useful in such circumstances.

The project involves the use of mixed missile-artillery and small arms for self-defense. On the bow and stern, it is proposed to place the Mk 15 Phalanx anti-aircraft installations with an 20-mm automatic machine. Also, the ship’s air defense can get a SeeRAM installation with RIM-116 RAM missiles. Around the perimeter of the ship it is possible to place machine guns to protect against small surface objects.

It should be noted that a similar appearance of the ship takes place only in the current version of the initiative project. In the future, the FLHD project can be developed and significantly changed in accordance with the wishes of the customer. However, one should not expect a radical restructuring - the main provisions of the project should remain unchanged.

Presented at DSEI 2019, the new project of the universal landing craft from JMU looks quite interesting, but does not make much impression. The proposed UDC is in fact just another representative of its class, having a number of characteristic features.

By its design, characteristics and combat capabilities, FLHD is close to other modern UDC. There are no specific features that can attract attention and highlight LHD compared to other UDCs. Perhaps the ship will differ from the "classmates" in certain technological features, more modern equipment, etc. However, this does not change the overall picture.

It can be assumed why the project looks like this. As far back as 2014, the Japanese command announced its desire to acquire a new UDC in addition to the three existing ships of the Osumi type. The possibility of buying an American-built ship was considered, and the Wasp type UDC looked the most profitable and successful choice. 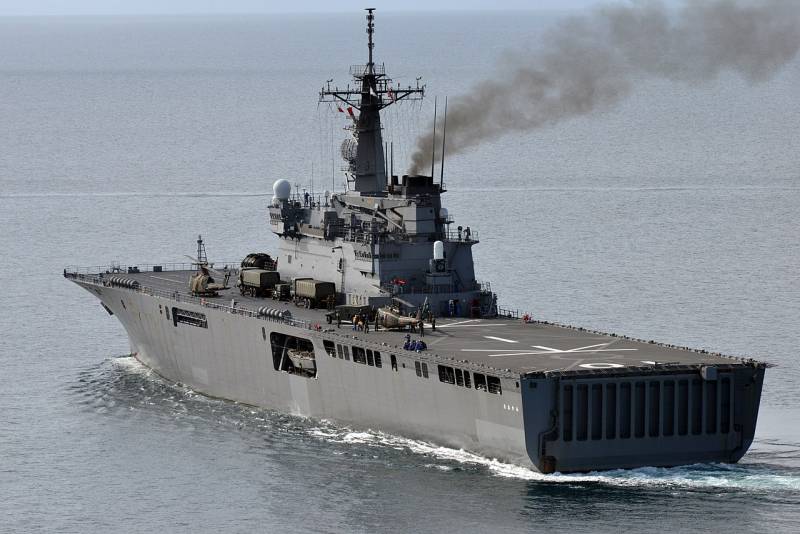 UDC "Osumi" - the lead ship of the same name project
Over the past five years, the desire of the command has not turned into a real contract. However, it spurred the development of its own Japanese military shipbuilding. As a result, to date, Japan Marine United has developed an initiative project, which mainly meets the requirements of the MCC.

In the proposed form, FLHD differs noticeably from Wasp type UDCs both in size and displacement, as well as in payload. However, it is of Japanese origin and can be built on its own shipyards. In addition, losing in the characteristics of the American ship, LHD bypasses its own Japanese "Osumi". Thus, the MSS in any case will be able to increase their capabilities.

From drawing to product

The first official show of materials on a new project from JMU took place just a few days ago. In the near future, the command of the Japanese MSS will become acquainted with the project. If it is interested in the proposal of domestic shipbuilders, work will continue. Accordingly, a construction contract may appear over the next few years.

However, the opposite scenario cannot be ruled out. The MSS command is still planning to strengthen the landing fleet, but the JMU LHD project is far enough from his vision of a promising UDC. As a result, the military department may not be interested in the proposed project, and it will not leave the development stage.

However, the argument in favor of the new Japanese project is the lack of any progress on the purchase of a foreign ship. After the 2014 statements, there was no real action, and the ships of the Osumi project still form the basis of the MSS landing forces. Thus, there is no actual competition, and FLHD is in a fairly good position.

The existence of a new UDC project was revealed only a few days ago, and its prospects are still unknown. The development company hopes to interest a potential customer, but he does not comment on its proactive development. The project will officially be presented the fleet in the near future, and only after that his future will be known. In the meantime, there is uncertainty that can be interpreted both in a positive and in a negative way.