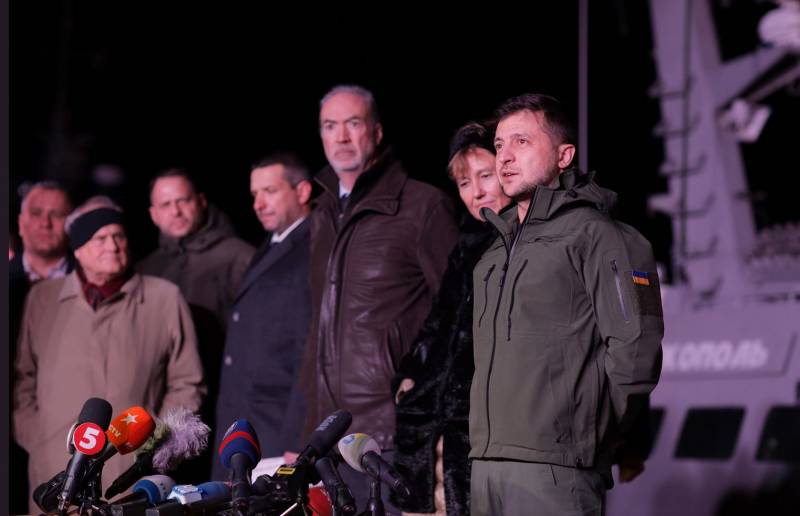 Ukrainian, European and Russian media yesterday howled unanimously about how the Russians pulled the Ukrainian naval forces. Indeed, leaving the 10, or even the 15% of the Navy without a toilet, light bulbs, shades, stoves and rescue equipment, in the sense of rubber boats, is a serious diversion. Any sailor understands that without a toilet bowl or light bulb, even an aircraft carrier becomes unworkable.


Naturally, we decided to conduct our own investigation of this diversion. The country, that is, you and I, must know its heroes. Whoever they are: mtrs, seals (devils, frogs, crocodiles or whatever animals), top-secret ichthamnets or some illegal scouts who successfully disguised as dolphins or quatrans ...

Moreover, in the list of our agents (in the sense of “VO” subscribers) there are people who are fairly close acquainted with very informed military personnel of the Ukrainian Navy. Not with the land admirals, but with those who are brewed directly in the naval broth of events. In the thick of it, not only events, but also everything related to fleet. We are, of course, talking about our midshipmen and Ukrainian master foremen.

This is what the Russian midshipman from Crimea told us, whose brother-in-law, the wife-in-law of his acquaintance, serves as master foreman in the Ukrainian Navy. I mean, he manages the food warehouse, but because of his dashing appearance and Cossack mustache-tails, when he arrives for the next Kiev “sailor” or someone of a higher rank, he always turns into the main accompanying “important person” and the eternal messenger commander somewhere and for some reason.

So, the story of the foreman about how President Zelensky met most of the Ukrainian Navy, in the translation of our midshipman.

It all started at the airport. For some reason, the president’s independence plane could not be started. It happens that the fuel is expensive, and live aviation master sergeants need. Who knew that Zelensky urgently wanted to fly somewhere there. They thought that by December 9 they would bring new fuel, and everything would be sewn-covered.

The Air Force commander of Ukraine, of course, podsuetsilsya. “And come on, Mr. President, on a military board I’ll throw it up!” We’ll start something now - and with a breeze. ” Well, of course, otherwise other masters serve in the Air Force! And the president has been spinning in his new position for six months now. He knows the situation. In short, he refused to fly on a military plane. Life is more expensive.

I went in my presidential car. Well, out of habit, I stopped at a gas station and bought a shawarma. But the security did not know that they would stop. In short, the Ukrainian president ate shawarma at most I can’t.

They go further. And you know what roads in Ukraine you have. Shakes even in a limousine. A shawarma is mixed in the stomach. So we arrived at the port. But there is no fleet! President demanded binoculars. Where to watch the ships.

"Well, they are floating." He finally saw a caravan of boats. “They don’t swim, but go, Mr. President,” the land admiral reacted. “We came here! On their feet. And these on a rope are pulled like shit. So swim. And don’t be smart here, ”the guarantor of the constitution replied. And the shawarma is already bubbling in the stomach.

In general, the president rushed to inspect the ships so that the heels sparkled. The commander is behind him, I am behind the commander, pushing journalists back. One even broke her leg with zeal. And it was a bit chilly on the pier, to be honest.

And I look, and the president is looking for something. It will slip into one room, then into another. And faster on. And it reaches me that the shawarma requires him to urgently blow out the latrine. In short, we run around the ship ...

“What is this?” And the door with the letter “K” shows. "Galley, Mr. President." "What's this? And what is this? .. ”Well, can you imagine how many premises there are ... And all are marked with different letters. It seems impossible to write completely. So that the enemy does not know. And the letters are like a cipher. And the shawarma props up ...

And then, well, it happens like this, a door with the letter "B". The president there right away is a dive. “Dear journalists and sailors, let's stop for five minutes.” And let's rumble there with some piece of iron. “Hey, somebody, turn on the light here. Where's the toilet? ”

And the journalists are on the air. News gone. There are no switches on the ships. There are no bulbs and, most importantly, the Russian toilets were stolen. The main thing is that the commander, in the sense of reporters, tried to explain to them that “B” is a fan room, not a whirlpool (lavatory, Ukrainian), and they answered him: “You do not know the laws of news broadcasting. The news, if it went on the air, became true! ”

Who knew that your border guards on boats, sailors, and even FSB officers, would turn out to be a video of Ukrainian ships. In short, the admiral is now looking for someone to anger. He called the NATO admirals. They are laughing. That's how Russia set us up again.

History, which I told you, was invented from beginning to end. Maybe it was a bit wrong. Maybe the truth is that during the transition, Ukrainian boats and a tugboat self-figured out and turned into what the Ukrainian media are talking about.

But until recently, even some of us believed that really proud people live in Ukraine. People who pride in their own country are more important than a fat wallet. Mutation? May be…