Airplanes with wrinkles. Is it worth the worry? 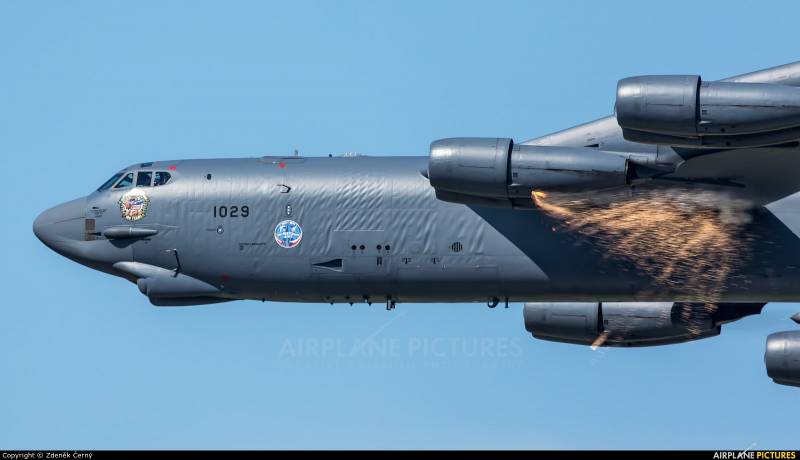 The same photo from The Aviationist magazine. In addition to the dented fuselage - sparks from the engine due to a foreign object

For almost all of its stories aircraft face a characteristic phenomenon in the form of sheathing deformation. Under certain circumstances, a flat external surface undergoes warpage and is covered with “wrinkles” that spoil the appearance. However in modern aviation this is not a problem - such deformations are taken into account during design, and in some cases are provided initially.

Due to various factors, the problem of local deformation of the skin was first encountered in the early stages of aviation development, when aircraft were built of wood and covered with canvas. The introduction of new materials and the improvement of the design made it possible to get rid of wrinkles on the surface, but did not completely exclude their appearance.

The era of all-metal aircraft brought new advantages, but did not save the equipment from the shortcomings. Even modern aircraft models sometimes have characteristic wavy plating sections. The skin is deformed between the power elements, because of which the surface of the airframe takes on a specific form. 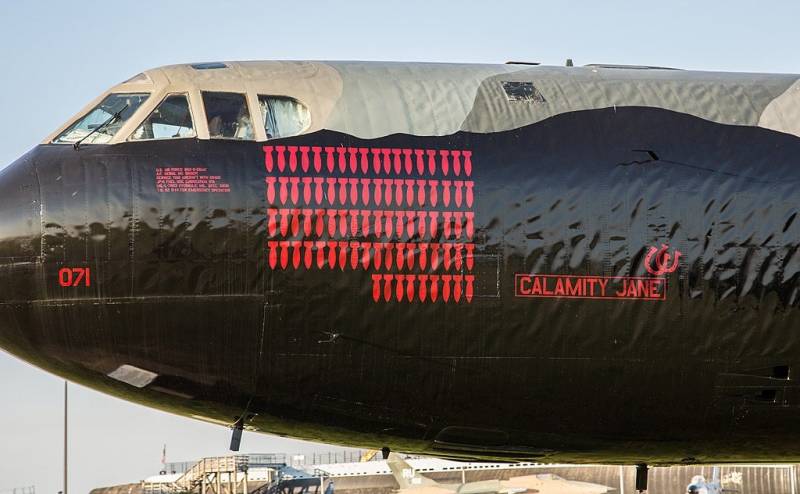 The topic of warping the skin of the aircraft recently raised again the foreign aviation press. The reason for this was a curious photo of the American strategic bomber Boeing B-52H Stratofortress. It was clearly visible on it that in the area between the cockpit and the wing, the left side of the fuselage is seriously deformed and forms a wavy surface. The boundaries of such a deformation passed along the force elements.

It should be noted that this is not the only photo of the B-52 with similar deformations. Numerous photographs of other planes or helicopters with such a skin condition are known. They often annoy the public, but experts remain calm.

Causes of the phenomenon

In the days of wooden structures and linen sheathing, “wrinkles” were mainly associated with the imperfection of materials and lack of experience in the construction of equipment, as well as with a low production culture. All these factors, including in various combinations, could lead to the formation of small or large wrinkles on linen sheathing. 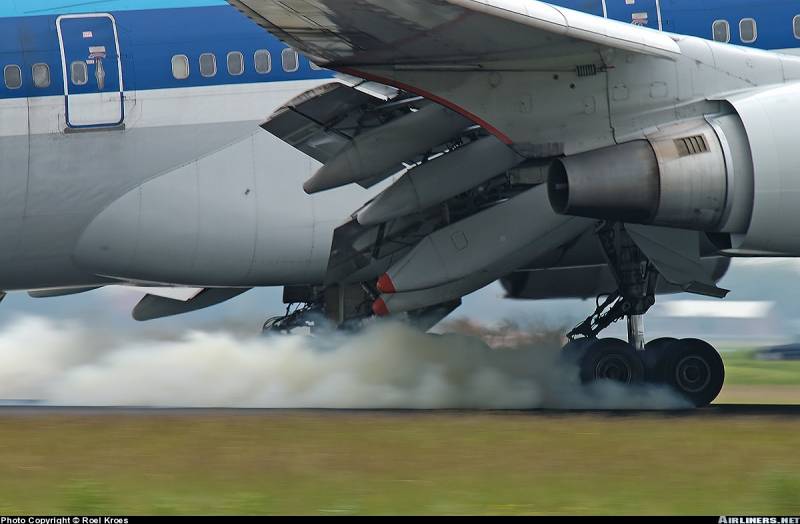 Passenger Boeing 747 with deformation of the fuselage behind the wing. Photo Airliners.net
A sloppy installation of flexible sheathing led to asymmetric stretching with subsequent deformation. The wooden power set, under the influence of external factors, could slightly change its size and shape, which affected the skin. During the flight, the power set took over the load and also deformed - with a known effect on the shape of the canvas.

In the case of mixed or all-metal structures, the last factor is preserved - the deformation of the airframe under the influence of various loads in flight and in the parking lot. Other warping conditions have been largely eliminated.

Consider the processes of deformation of the skin on the example of the aircraft B-52H, which has become the protagonist of recent publications. In his photograph, it is clearly visible that at the level of the cab sides, the skin protrudes outward along the cells of the grid formed by the frame. Behind this section, closer to the wing, there are several similar "cells" with diagonal wrinkles. Other areas of cladding, including in the immediate vicinity of the warped, they look straight and do not attract attention.

Glider B-52H is built according to the semi-monocoque scheme. Its basis is a strong power set; part of the load is covered by the casing. Moreover, the metal sheets of the casing have a thickness of not more than a few millimeters, which determines their tensile and compression strength and allows to reduce the mass. The design of the airframe is made elastic and responds to loads by some deformations within the established norm. The bulk of the load falls on the frame, but the casing does not remain without work. 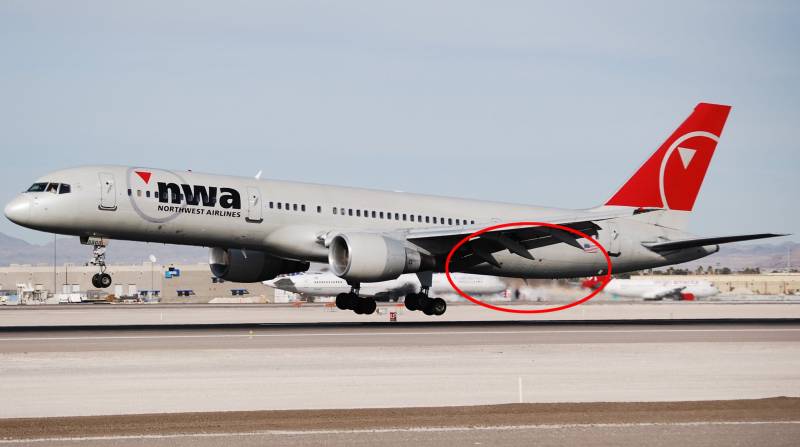 Boeing 757 with similar manifestations. The ellipse marks the warpage zone. Wikimedia Commons Photos
In the parking lot, the nose of the airframe rests on the front landing gear and loads are distributed optimally. After refueling and suspension of the ammunition load, the mass of the aircraft increases, and after takeoff it is distributed differently - all the weight is transferred to the wing by means of power dialing and working skin. Performing various maneuvers can lead to a change in the direction and value of the load on specific sections of the frame and casing.

The long-term effect of tensile loads that occurs during the long-term operation of an aircraft can lead to deformation of individual sections of the skin. The consequence of this is the warping of the outer surface with a specific appearance. However, despite the damage to the exterior, the deformed plating sections can retain the required strength and are suitable for further operation.

Continued operation and maintenance of loads lead to further deformations, and the part still has to be changed. However, such processes take a lot of time, during which the plane can get into the photographer’s lens and disturb the public.

Ways to combat the phenomenon

You can prevent warping at the stage of development and construction of the airframe, and for this you can use several basic ideas. First of all, a careful calculation of the structural strength is necessary, taking into account all the loads in the parking lot and in flight. The right choice of materials and details of the parts allows you to make the structure strong enough and rigid without risk of damage to the skin. 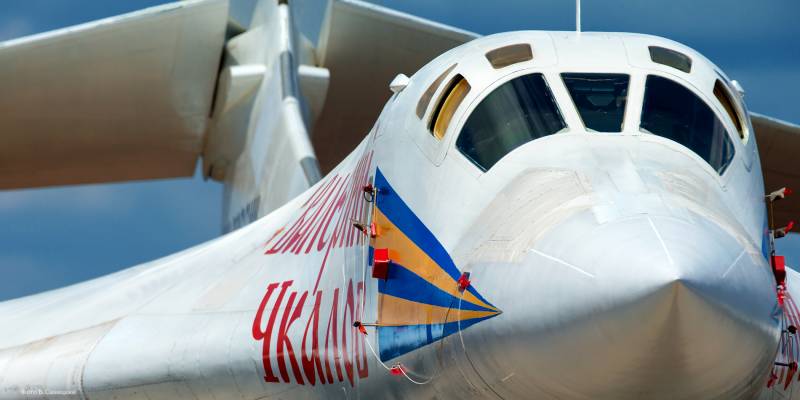 The Russian Tu-160 may also have a deformation of the skin - in this case, in the front of the center section. Photo by the Ministry of Defense of the Russian Federation / mil.ru
It is easy to see that on the B-52H “wrinkles” appear only in certain areas where there are large loads, and power elements are quite rare. Thus, the more frequent placement of the frame parts and the fastening of the casing to them allows you to otherwise distribute the load and exclude visible deformations.

Wrinkles are characteristic of flexible metal sheathing. Modern composite materials are more rigid, which is why they do not deform under similar loads. However, composites are more complex and more expensive than sheet sheathing. In addition, their application does not always meet the requirements of the project.

It should be noted that the warping of the skin is not always a problem that needs to be addressed. Such a phenomenon can be initially incorporated into the design to provide the desired ratio of strength, weight and flight performance.

No cause for concern

The behavior of the skin during the different phases of the flight and in operation is taken into account already at the stage of project development. Also determined are the service life and requirements for the cladding panels, compliance with which allows their continued use. 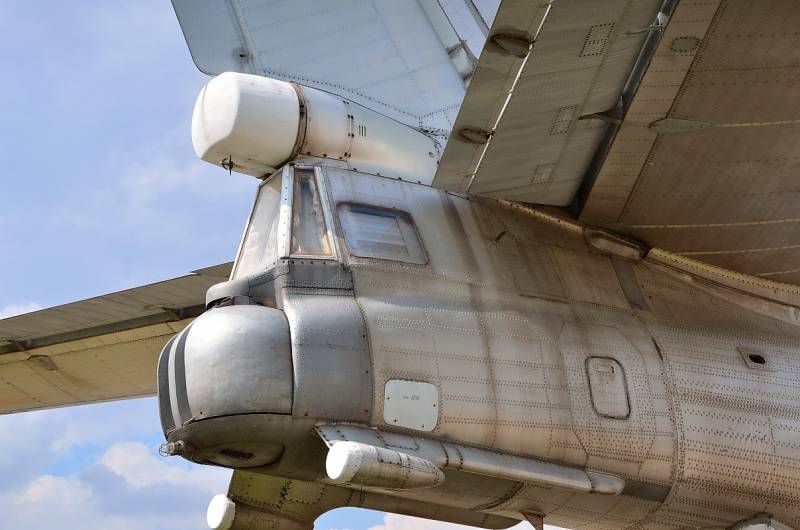 The tail of the Tu-95MS. Sheathing fastening seams are close enough to prevent wrinkles. Wikimedia Commons Photos
Using the example of B-52H bombers with record-breaking age, it can be seen that the “wrinkles” on the skin do not interfere with the operation of the equipment and are not a serious problem. Sheathing elements can be replaced with new ones, but the need for this does not arise too often. As a result, many planes continue to fly with wavy casing, which does not prevent them from performing their tasks.

Similar features of the airframe are observed in many other planes and helicopters of different classes, including in civil engineering. In all cases, deformation and warping alone do not become a cause for concern. Repair is carried out if there are appropriate technical prerequisites, while the appearance is usually sacrificed.

Thus, the recently published photo, which caused a lot of noise, shows only one of the curious features of modern aviation. Designers are well aware of it and take the necessary measures if they are needed. And there are no reasons for panic, even if the “wrinkled” plane looks strange and unusual.

We are in Yandex Zen
An-12 in Afghanistan
MiG-21 in Afghanistan
43 comments
Information
Dear reader, to leave comments on the publication, you must to register.