Tests ship Ka-52K continue after the definition of the carrier 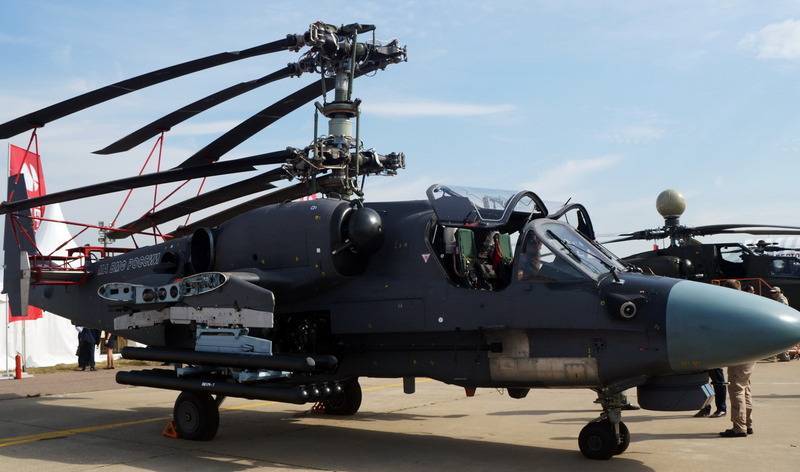 The supply of Ka-52K Katran shipboard helicopters is provided for by the current state armament program, so work on them will continue. This was announced by the head of the Rostec air cluster Anatoly Serdyukov in an interview with Interfax.


According to Serdyukov, four prototypes of the Ka-52K Katran shipboard helicopter have now been manufactured, which have already passed the entire cycle of ground tests and are located at Kamov’s base and are ready to continue testing. However, there is no possibility to continue testing, since there are no carriers for these helicopters.

(...) four prototypes of Ka-52K, which are now at the Kamov base and are ready to continue testing. But carriers are needed that are not yet defined. The project is being discussed with the Ministry of Defense; further work is planned. In the state armament program (GPV) until 2027, the delivery of Ka-52K is provided
- said Serdyukov.

Recall that in August of this year, the CEO of Russian Helicopters Holding Andrey Boginsky said that the ground part of the tests of four prototypes of the Ka-52K Katran was completed and negotiations were underway with the Ministry of Defense to conclude a contract to continue R&D on this topic.

Initially, the decked version of the Ka-52K was designed for the French Mistral type landing helicopters, but now, according to Boginsky, these helicopters need to be tied to another ship, which will be done only when the Ministry of Defense finally determines the concept of attack helicopters in the Navy navy.

The CEO also said that the ship version of Ka-52K was made with a folding column of blades, the blades are folded back along the helicopter body, which will help to place it in ship hangars, limited in area.
Ctrl Enter
Noticed oshЫbku Highlight text and press. Ctrl + Enter
We are
Preliminary tests Ka-52K "Katran" were successfulNew sharp turns in the case of Oboronservis: agenda for Anatoly Serdyukov
31 comment
Information
Dear reader, to leave comments on the publication, you must to register.