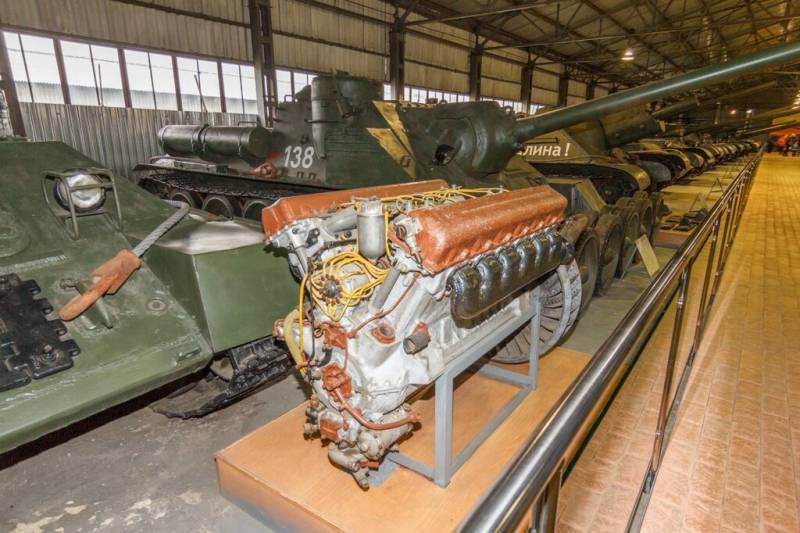 By the beginning of 1940, the final appearance of the B-2 engine was formed. It was a V-shaped 12-cylinder diesel engine with a cast 4-valve head, power bearing steel studs for greater strength and a centrally located fuel nozzle. Traces of similarities with aviation AN-1 (it was developed at TsIAM) in terms of the configuration of the connecting rod and piston group. In both engines, the pistons were stamped aluminum with the main and trailed connecting rods, and the bearings were made with pouring with lead bronze. On the first B-2 prototypes, the connecting rods were forked and often broke, so it was decided to use trailed connecting rods with a slight divergence in the right and left blocks. 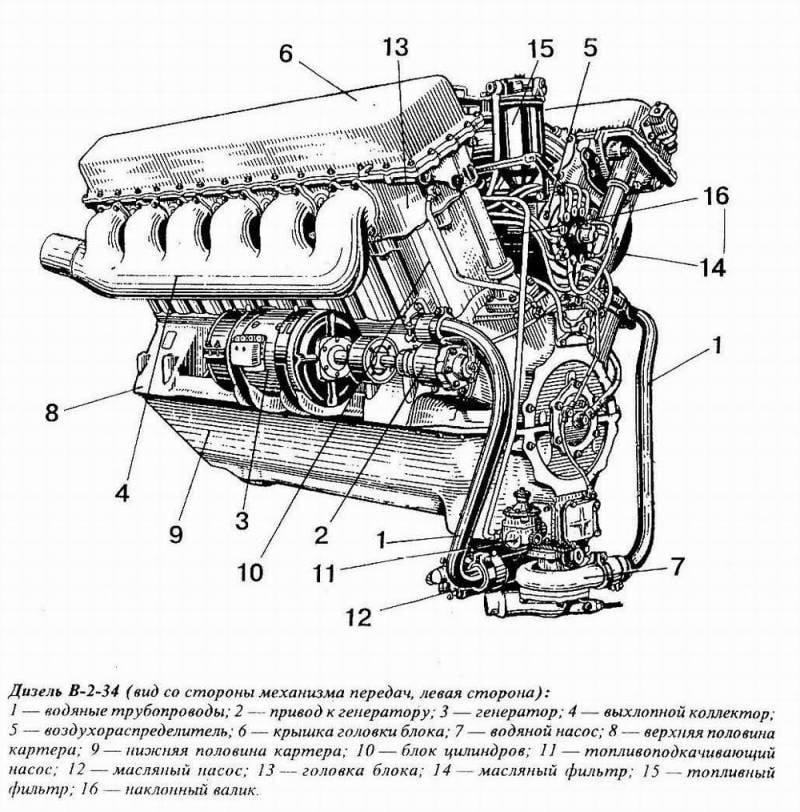 In addition, with the AN-1 tank diesel is related to jet mixing, and is distinguished by dimensionality. In B-2 it is 15/18 (piston stroke / cylinder diameter, cm), and in AN-1 this parameter is 18/20. It is interesting that the dimension 15/18 for a tank diesel was nevertheless taken from another aircraft gasoline engine, the M-100, by V. Ya. Klimov. However, all of the above does not mean that the B-2 was born as an aircraft engine. It was originally a tank engine, which in many ways had to be designed according to the patterns of aircraft engine building, since there was simply no other methodological basis for high-speed diesel engines in the Land of Soviets. And in the 30s, only in aircraft engine building was a sufficiently high level of design and production of such complex equipment. Therefore, Kharkovites had to seek help from the TsIAM design office, as already mentioned B-2: "obstinate horse" of the Soviet tank industry. In addition to the outstanding designer Timofei Chupakhin, Mikhail Petrovich Poddubny made an equally significant contribution to the technological development of production. At KhPZ, he is obliged to develop complex machining operations for crankcase parts, a head, a crankshaft, connecting rods, specific high-speed machining of plain bearings and core burnishing. In his memoirs, the chief designer of TsIAM, Professor, Doctor of Technical Sciences Aleksey Dmitrievich Charomsky writes that the technologist Poddubny often proposed solutions that were much more progressive than those that came to mind to the designers. 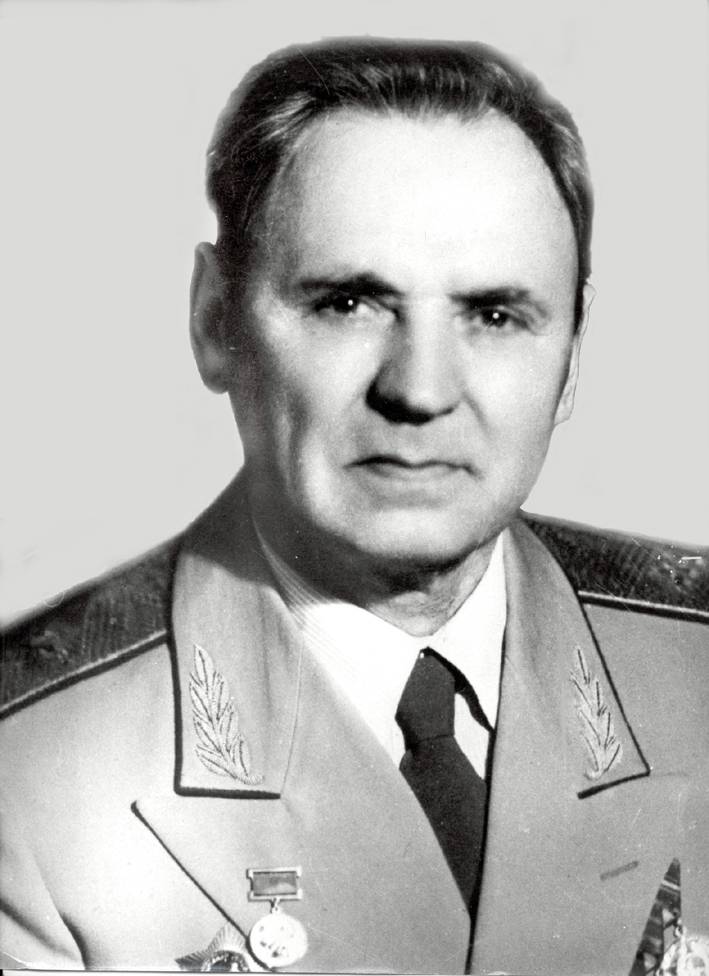 Alexey Dmitrievich Charomsky
I had to give a lot of time to the fight against the gas joint - the diesel was powerful, the copper gaskets simply could not withstand the gigantic pressure. There were even thoughts to reduce power to 400 l. s., while leaving the option of "combat" short-term increase to 500 l. from. However, the military, for obvious reasons, did not understand this idea and the engineers had to develop a special stamped integral aluminum gasket for six cylinder blocks at once. In addition, additional bolts tightening the head along the perimeter were introduced into the design.

In addition to the fact that in the USSR there was practically no experience in the design and construction of “land” high-speed diesel engines, the country did not have a basis for the development of fuel pumps. On the initial prototypes of the DB-2 (the predecessor of B-2) there were two Bosch 6-plunger injection pumps with advance couplings. Later, the cams in the pump were modified, bringing them to the form used in the aviation AN-1. Then the whole structure was redesigned, having already ordered 12-plunger pumps from the Germans. Subsequently, difficulties with the production of a pump of its own design were overcome, but problems with the quality and volume of production of such a critical unit haunted the B-2 throughout the war.

Despite the difficulties with finalizing the motor, in the pre-war period at the Kharkov factory No. 75 they worked on new modifications of the B-2 line. In particular, an 800-strong B-2CH equipped with supercharging from a drive supercharger was developed. Literally a few units of this powerful engine were built, the best of which worked out 190 hours to failure, but spent too much oil and clogged with soot on the piston group. They also developed the 6-cylinder “baby” B-3 with a capacity of 250 l. from. (later it was boosted to 300 hp), which was successfully passed first on the Voroshilovets tractor, and later on the BT-5. But even in the 300-strong version, this engine was rather weak for tracked vehicles of this class, and for some time they refrained from installing on armored vehicles. It was finalized according to the test results and in the B-4 variant it was later put on the light T-50. Ship modifications B-2 / l (left rotation) and B-2 / p (right rotation) were installed in pairs on light naval ships of the Navy since 1940 of the year.

The impending war forced the leadership of the Soviet Union to force the production of a series of new models of equipment in a series, often to the detriment of workmanship. One can argue for a long time about the appropriateness of such an approach, but the fact remains that by the start of the war, the B-2 was clearly a crude engine requiring changes in design. At the same time, without bringing the engine to mind, the factory workers in Kharkov received new tasks, while spraying resources. So, in March of 1941, the leadership demanded that the 700-strong B-5 for the KV-3 tank be brought to the end and in the shortest possible time, and by the fall of that year, create a giant on 1200 hp! Yes, by then B-2 was already mass-produced, but it constantly required attention and fine-tuning of production processes. But there was neither time, nor resources for this in Kharkov plant No.75. We will not dwell on how it developed история tank diesel after 22 on June 1941 of the year (there will be a separate cycle about this), but we will tell you better about the landmark tests of engines at the Aberdeen Proving Ground in the United States. In the book-monograph by Nikita Melnikov “Tank Industry of the USSR during the Great Patriotic War”, based on the materials of the Russian State Archive of Economics, data are presented that characterize the B-2 from a not very good point. 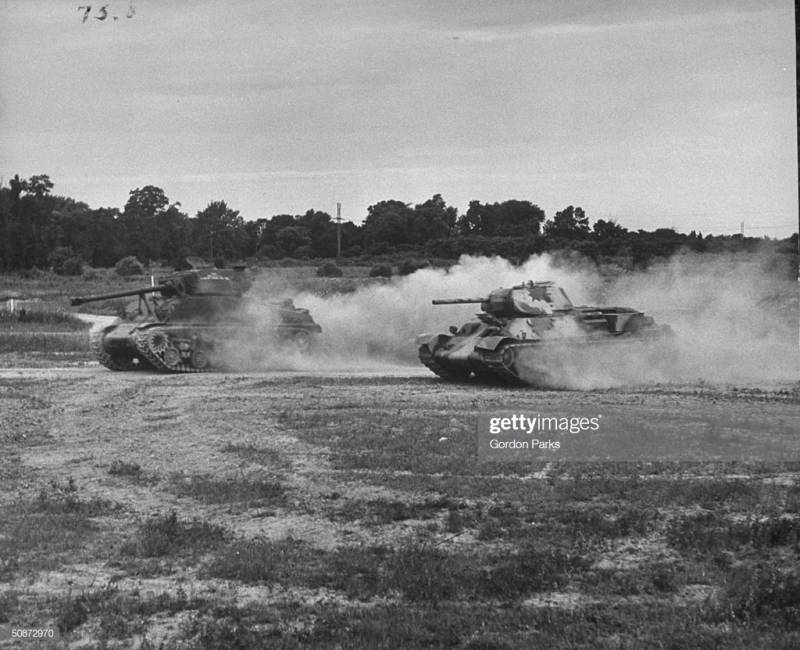 T-34 at Aberdeen Proving Ground
Recall that two machines, the T-34 and KB-1, were tested from November 1942 of the year to the end of 1943 of the year by specialists from the Aberdeen Proving Ground. It’s worth mentioning right away that tanks were released during one of the most difficult periods of our history, and the fact that they appeared at all testifies to the heroism of millions of Soviet citizens. Nevertheless, the dry technical reports of our then allies indicate that one of the main problems of the B-2 was the air purifier. I quote the book of candidate of historical sciences, senior researcher at the Institute of History and Archeology of the Ural Branch of the Russian Academy of Sciences Nikita Nikolayevich Melnikov:
“From the observations made it can be seen that the requirements in our country (that is, the United States) for air purifiers of military vehicles completely prevent the use of a Russian type air purifier. This was confirmed later, after engine failure, when a large amount of dirt appeared inside the engine. ”

The Americans also indicated that the filter has a high resistance, causing “air hunger” in the motor. Now for the cooling system:
“Engine cooling does not meet the requirements of our standards, and if it had not been compensated by the engine design, the engine life would have been significantly reduced.”

Obviously, they meant the possibility of a diesel engine working at low speeds, which somehow protected the engine from overheating. After this, Nikita Melnikov gives a rather controversial statement that it is for these reasons that the main share of the successful operations of the Soviet tank troops falls on the winter period. Say, and temperatures are lower, and there is less dust in the air. The tanks that were sent to the USA were assembled under special control, and even in this case, the T-34 failed due to engine failure already at the 73 hour of the test run. It remains only to guess at what kilometer an ordinary serial tank would stand in the hands of the American military. 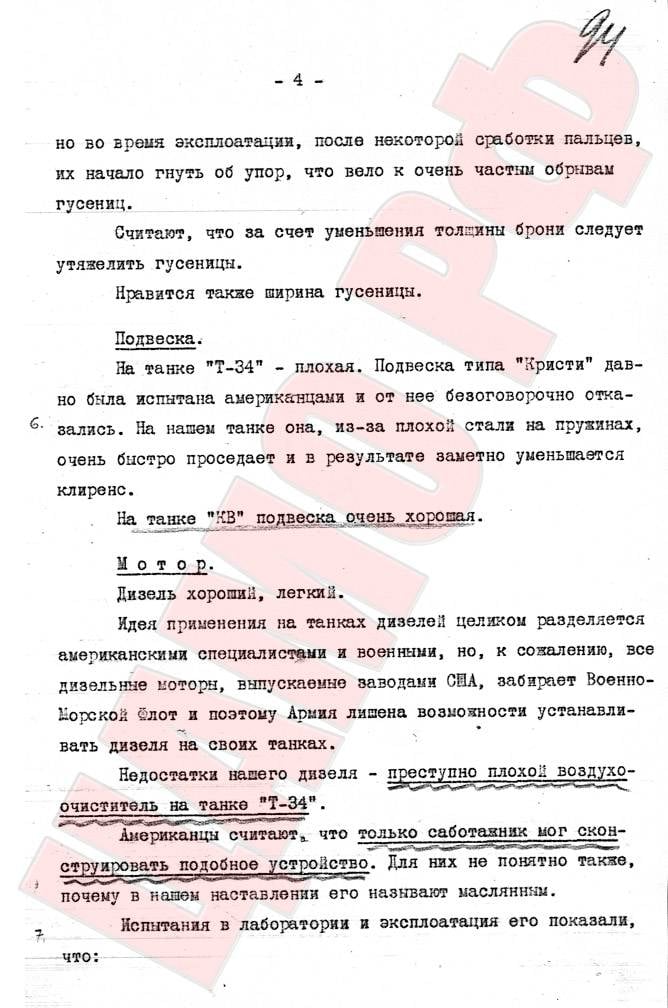 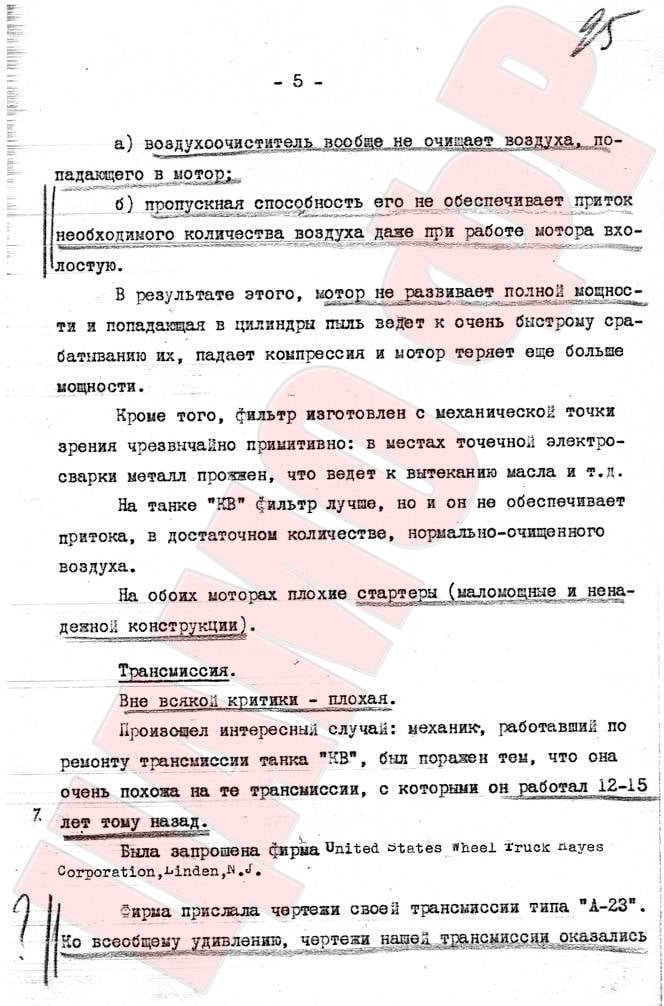 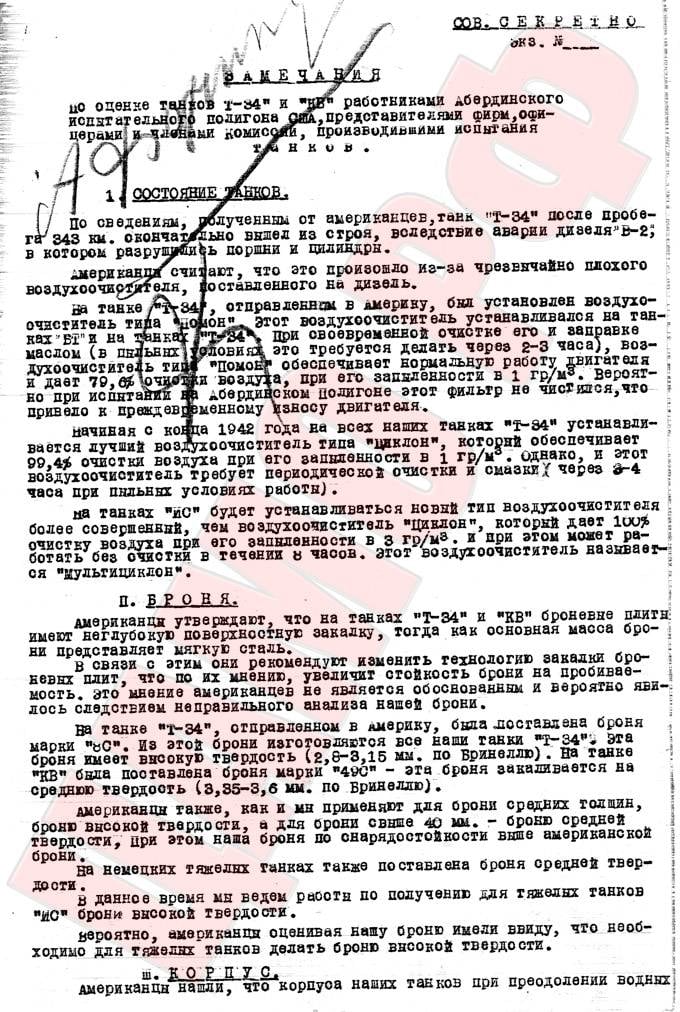 Copies of reports from the TsAMO archive of the Russian Federation
However, there is another point of view on these tests expressed by Yuri Pasholok, a well-known expert in the field of tank history. He claims that there was no special assembly of tanks, and the Americans simply did not fill the Pomon filter with oil, because of which, in fact, all the troubles happened. If the Yankees had guessed to fill in the oil and even cleaned the filter in time, then at least they would have achieved 79% air purification. And since 1942 of the year, more advanced Cyclone filters have already been installed on the T-34, providing 99,4% air purification, of course, in working condition. Only Yuri operates with reports from the TsAMO archives of the Russian Federation, and not with the materials of the Russian State Archive of Economics, as was the case with Nikita Melnikov. In any case, you decide which side you are in this story.

We are in Yandex Zen
Is the old well forgotten to become the new? Part-2. By call of honor and duty
The family of two-stroke diesel engines of Soviet armored vehicles
142 comments
Information
Dear reader, to leave comments on the publication, you must to register.