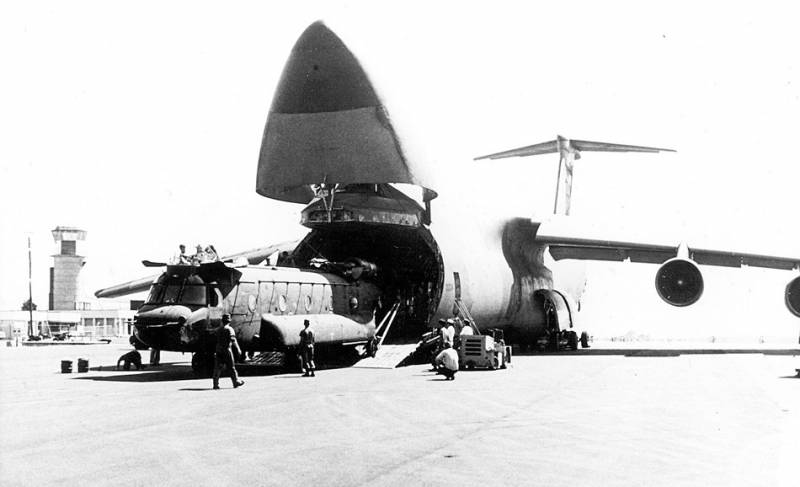 Unloading the C-5 transporter in N'Djamena

Foreign weapons and military equipment are best studied in real terms. They can be obtained in various ways - to take as a trophy, to buy from a third country or to pick up abandoned property corny. It was the third method that formed the basis of the American operation Mount Hope III. She was held in 1987-88 gg. To get the Mi-25 combat helicopter, previously owned by the Libyan Air Force.

At the very beginning of 1987, the prolonged conflict between Libya and Chad entered a new stage. The famous Toyot War began, during which the Chadian army was able to force the enemy out of the disputed area. In April, the advance of the Chadian army reached the Wadi Dum air base, and the Libyans had to leave it in a hurry. A lot of different assets were thrown at the base - and even a Mi-25 combat helicopter (export version of the Soviet Mi-24).

Information about the abandoned helicopter quickly got to Washington and interested the American command. In 1985, American specialists were able to study two Mi-24D helicopters hijacked by Afghan pilots to Pakistan. An export modification combat vehicle was also of great interest for study. 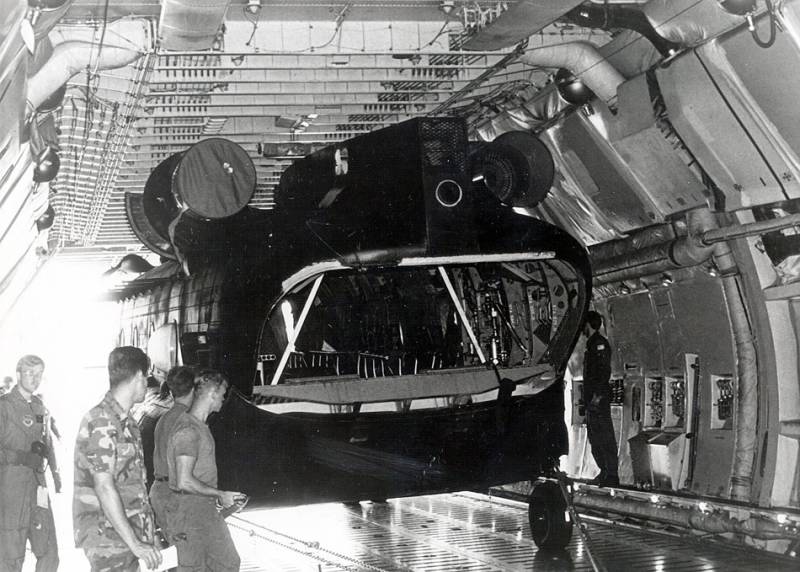 MH-47 helicopter in the cargo compartment C-5
Quite quickly, a proposal came up to organize an operation to remove the “ownerless” helicopter for research. This began one of the most interesting special operations of recent decades.

The military and political leadership of the United States approved the proposal, after which preparations began. The desired helicopter was located in a foreign country, and near the zones of activity of the probable enemy. All this imposed certain limitations and required the adoption of appropriate measures.

The helicopter removal operation was codenamed Mount Hope III. It was necessary to involve various units of the Air Force, intelligence, and even diplomats in its preparation and implementation.

The US Department of State was the first to do its job. This agency held talks with the Chadian leadership and agreed to conduct the operation. The African state agreed to provide airfields and air corridors, but refused direct military assistance. All US work had to be done independently or with the participation of third countries. 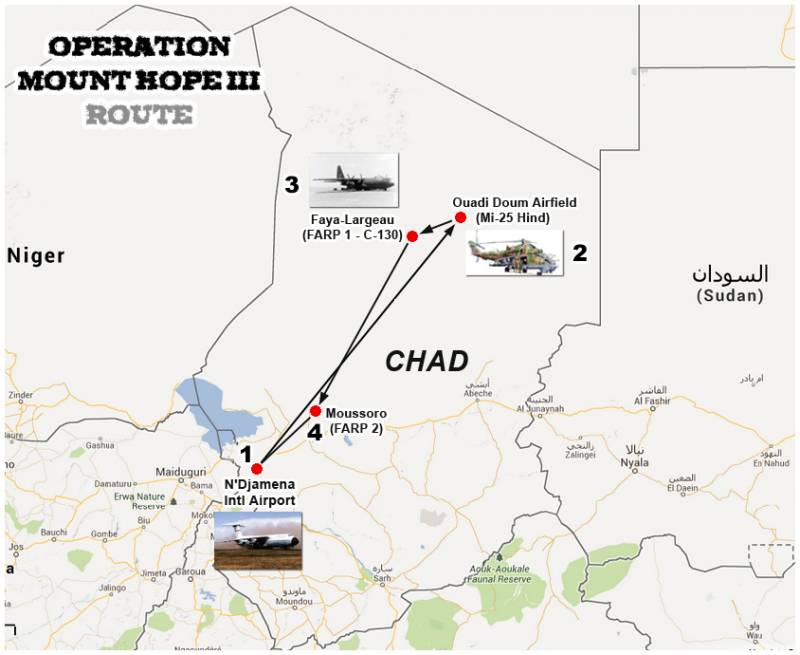 Also managed to negotiate with France. It was represented by a small land contingent and several Air Force fighter-bombers. The French military was supposed to help American colleagues on the ground and in the air.

Preparing for an operation

At that time, everyone remembered the failure of the Eagle Claw operation to remove the hostages from Tehran, and no one wanted a repeat of such events. For this reason, Mount Hope III was approached with the utmost responsibility. At the same time, the situation made it possible to dispense with haste and carefully work out all the plans.

In the last months of 1987, the command of the 160 Air Regiment formed a plan for a future operation and began training. The exercises were held at the White Sands training ground using all the necessary equipment and involving many military personnel.

C-130 transport carrier with fuel at Faya-Largio airfield
All elements of the operation were worked out at the training ground. Pilots of military transport planes and helicopters honed their flight skills at night, trained to carry large loads (soft water tanks) on an external sling, etc. Operated with intermediate landings for refueling. Ground units and specialists were preparing to work with a captured helicopter. During the preparation of the operation, it was possible to identify the shortcomings of the existing plans and correct them in a timely manner.

According to the Mount Hope III operation plan, several C-25 Galaxy and C-5 Hercules military transport aircraft were to be used in the evacuation of the Mi-130. The main tasks were assigned to two MH-47 Chinook helicopters. Several French Mirage F.1 were to cover from the air, and the ground group included several dozen fighters.

Preparation for the operation was completed in the spring of 1988. People and equipment were ready to be sent to Chad and were waiting for the corresponding order.

Take away in Xnumx hours 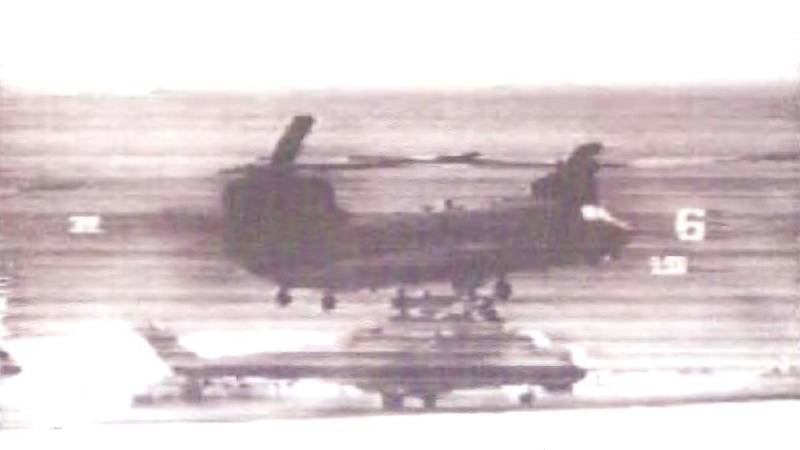 American helicopter raises trophy
For several hours, the Americans unloaded the helicopters and prepared them for departure. At night, two Chinook with additional tanks and fighters on board went to the location of the desired Mi-25. The flight lasted several hours, and during this time the helicopters covered almost 500 miles over the desert terrain. By morning, they were at Wadi Doom base.

The helicopters landed and unloaded the landing, after which one of them took off and began to observe the terrain. In the area of ​​the operation, Libyan troops were active, and the pilots should have noticed the danger in time. Also in the area were on duty French aircraft. In the meantime, the crew of the second helicopter and the equipment attached to it began preparing the trophy for export.

Mi-25 removed the rotor blades and fixed individual units. Then a helicopter of 7,5 t mass was draped around with cables and taken onto the external suspension. The MH-47, with a special load, took off and headed towards Faye Largio. After that, the second Chinook took the ground detachment and flew after it. 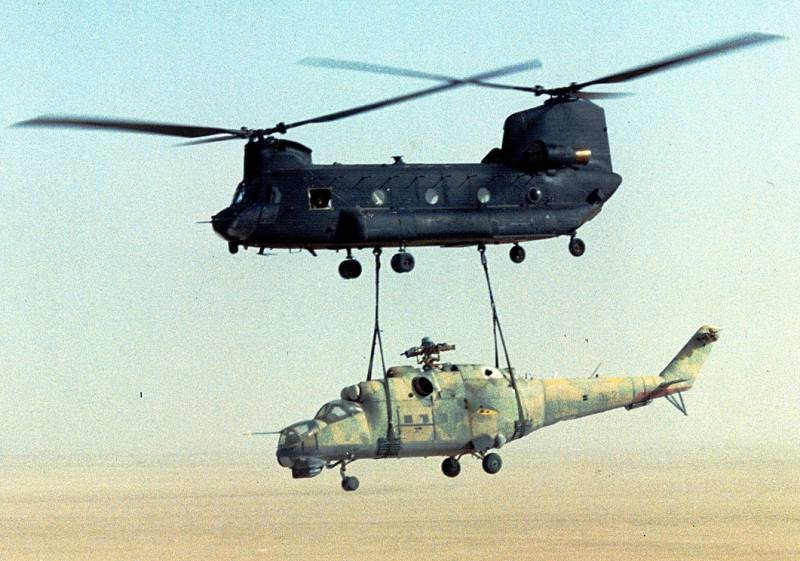 On the way to the target, the helicopters managed to generate most of the fuel, including additional tanks. In addition, they carried a considerable load, affecting fuel consumption. Because of this, helicopters had to make two intermediate landings at Chadian airfields, where C-130 with fuel was waiting for them. During the return to N'Djamena a sandstorm arose on the route, but it was possible to overcome it even with a special load on the suspension.

At N'Djamena Airport, the MH-47 gently lowered its load and landed. After that, the captured Mi-25 was again partially disassembled, loaded into a C-5 transport aircraft and sent to the United States. Soon, other 160th SOAR planes and helicopters and personnel went home.

Mount Hope III was particularly difficult and risky. Despite this, everything went almost perfectly. The pilots dealt with a uniquely difficult flight and bad weather. The Libyan army was indeed located in the area of ​​the Wadi Dum base, but did not notice the activity of a third country. It took only 67 hours to carry out the entire operation - from landing in N'Djamena to the removal of the trophy.

Operation Mount Hope III was a complete success. The United States got the desired foreign helicopter and did not suffer any losses. Long and thorough preparation fully paid off. Soon after the operation was completed, the results were summed up. 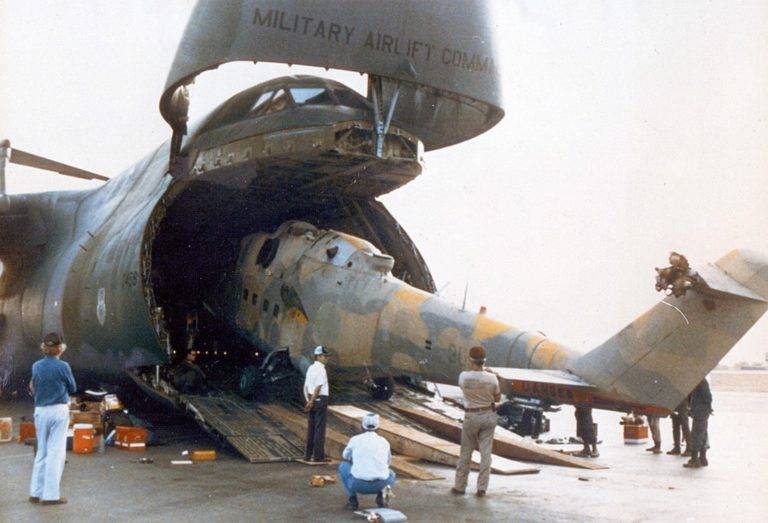 Loading Mi-25 in a transport plane
Participants in the operation received awards, commendations and other incentives. For the 160 Special Forces Regiment, the success of Mount Hope III was of particular importance, as this was the first operation of its kind in its stories. In addition, she looked like the successful rehabilitation of the US Air Force after the failure of the Eagle Claw.

Pentagon and aviation US industry received a great gift in the form of a real Mi-25. The US military has already managed to study the Mi-24 modification “D”, and now they have managed to get an export version of such a helicopter. The study of the resulting machine allowed us to draw new conclusions and adjust our plans for the development of weapons and equipment.

Subsequently, under certain circumstances, the US Army was able to get several other Mi-24 helicopters of various modifications. However, it was in the case of the Libyan Mi-25 that a whole operation was needed with the participation of a special aviation regiment and foreign allies. Other samples got much easier.