The goal is oil. US will not leave Syria 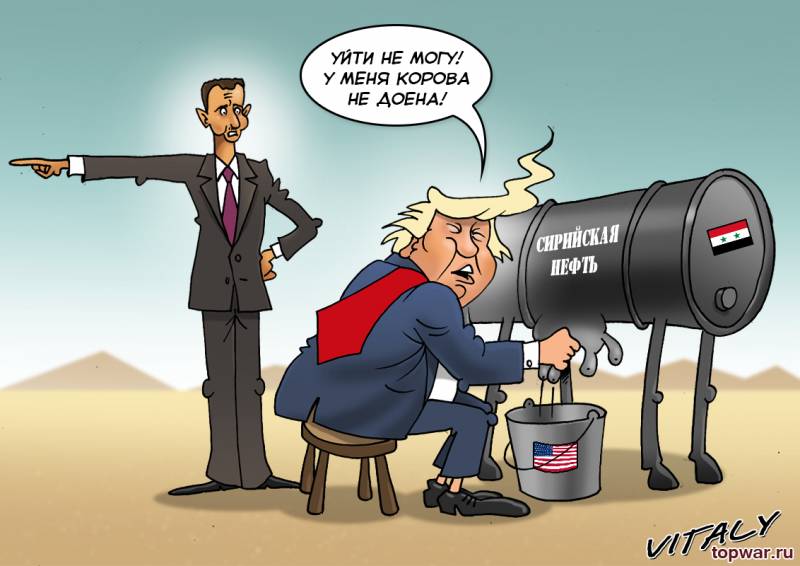 Despite the loud statements of Donald trump about the withdrawal of American troops from Syria, in fact, the US armed forces will not leave this country voluntarily. After all, Washington quite clearly headed for the capture of Syrian oil fields and maintaining control over them, respectively, and the presence of troops in Syria is simply necessary.

Syrian oil and the USA

Syria is not among the countries - world leaders in oil production. Unlike neighboring Iraq, there are no colossal reserves of “black gold” in the country, but nevertheless, the volume of proven gas reserves is estimated at 241 million cubic meters, and oil - at 2,5 billion barrels.

The maximum level of oil production in Syria reached the beginning of the zero, after which it began to decline. But the real decline in oil production came after the outbreak of civil war in the country, when the Syrians were simply not up to oil. If we talk about the territorial location of the main foci of oil production, they are located in the east of the country, near the border with Iraq, in the province of Deir ez-Zor. This region has always been considered the poorest and most backward in socio-economic terms, given that a significant part of the province is a desert.

During the civil war, the oil-bearing areas were first controlled by terrorist groups, and then Kurdish forces began to crowd out the terrorists. For ISIS (banned in Russia), the illegal extraction and sale of oil and gas was one of the main sources of cash flow for which the structure itself was maintained, and a constant inflow was ensured weapons and “volunteers” from Asian and African countries. Even the oil refineries and gas plants were under the control of the militants, which allowed for the uninterrupted sale of oil and gas. 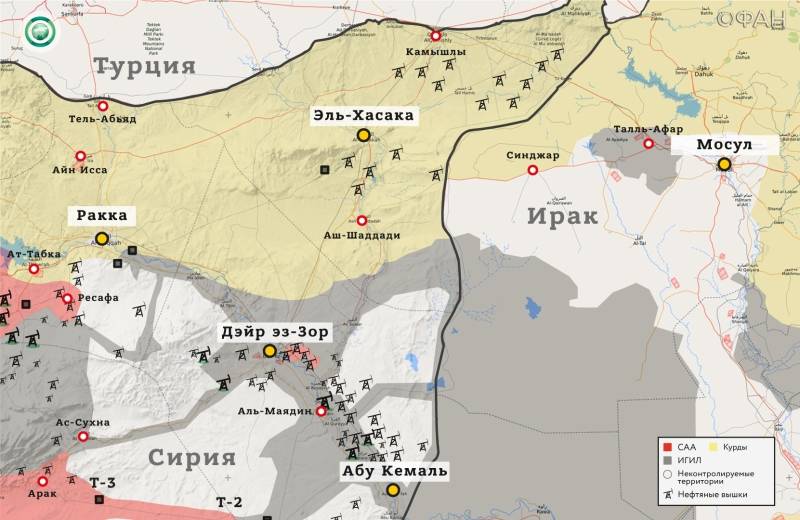 However, with US support, within a couple of years, Kurdish formations managed to push ISIS militants out of the oil producing regions and take control of key fields and plants. This circumstance significantly changed the alignment of forces in the region, since now the Kurdish resistance structures began to receive funds from oil production and sales, which sent the money received to finance the Self-Defense Units, trained and armed with the direct participation of the American army.

Naturally, the American leadership immediately became interested in Syrian oil - in a country affected by war and chaos, it is very simple to establish control over oil fields and, hiding under good goals, begin trivial plunder of Syria's natural resources.

Officially, Americans express concern that Syria’s gas and oil would not fall back under the control of terrorists, but in reality they are much more perplexed by the need to undermine the economic foundation of the Bashar al-Assad regime.

Where will the US military be located?

Following his loud statement about the withdrawal of American troops from Syria, Donald Trump said that the United States would nevertheless leave its military contingents in the province of Deir ez-Zor - ostensibly so that the oil fields would not again fall under the control of terrorists. Therefore, two new military bases of the US armed forces are being created in eastern Syria - and this is in addition to the 800 American soldiers and officers that are located between Al-Hasaka and Deir ez-Zor.

About 300 US military, armored vehicles and heavy weapons were sent to the locations of the new bases. The U.S. troops have been tasked with patrolling the oil fields, which are currently controlled by the Kurdish Self-Defense Forces. Washington does not plan to withdraw the American contingent from the oil region.

Recently, General Mark Milli said that the US command is not considering the possibility of a complete withdrawal of troops from Syria: about 600 American soldiers and officers will still remain in the province of Deir ez-Zor to monitor the situation in the oil fields. That is, if before the Pentagon announced the withdrawal of American units in neighboring Iraq, then they refused this decision.

It is likely that influential “hawks” surrounded by Secretary of State Mike Pompeo opposed the final withdrawal of troops from Syria. Trump, who initially insisted on the complete withdrawal of troops, was forced to cede to the Secretary of State and his entourage, because it was about the financial interests of the United States - control over oil fields. In addition, Mike Pompeo repeatedly drew attention to the fact that Washington spent enormous funds to help the Kurdish national movement and the Syrian democratic forces as a whole, which means that the money spent must be "beaten off". 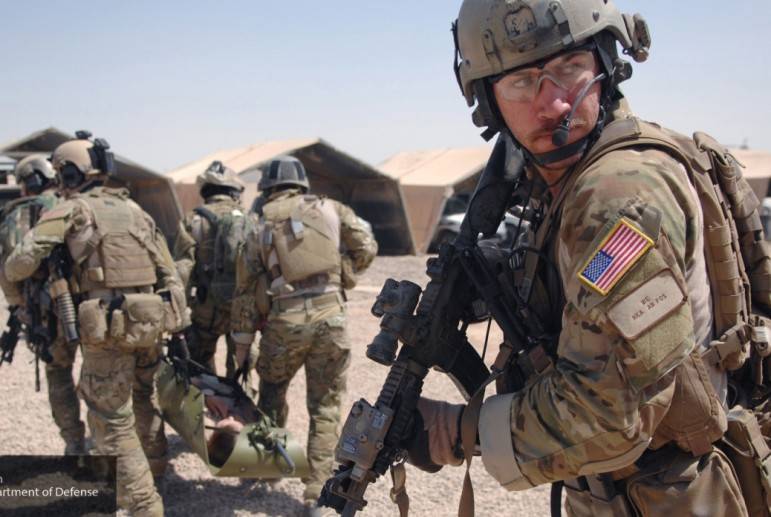 The position of the hawks in the US administration is due to their negative attitude towards Iran and fears that Tehran will gain control over the oil fields in Deir ez-Zor through Damascus. It is the desire to oppose Iran, and by no means terrorist groups, that actually drives the American leadership when it decides to deploy its troops in Deir ez-Zor.

A few years ago, one of the main headaches of American leaders was to persuade the Kurdish resistance under no circumstances to conclude an agreement with Assad. Americans really need the Kurds not to put up with official Damascus and not to allow Syrian government troops into the oil-bearing areas. Indeed, if Damascus gets access to oil, then, as the US State Department believes, Iran will inevitably appear in the region.

In an interview with Vice News, American expert Nicholas Heras expressed the view that the US leadership, in order to counteract the assertion of Damascus and Tehran in Deir ez-Zor, could go on to form a new military-political structure like an alliance of Arab tribes in this province, which could become a counterweight to the Syrian government troops. This tribal formation, which will be based on Sunni Arabs living in Deir ez-Zor, should not allow Iran and Syria to form a land corridor that will connect Iran and Iraq with Lebanon. This corridor passes just through Deir ez-Zor.

On the other hand, to counter the Syrian government forces and, especially, the Iranian Corps of the Islamic Revolutionary Guards, the Arab-Sunni tribal militia is a very weak ally. Therefore, the American leadership is afraid of the complete withdrawal of troops from the eastern Syrian province, without creating reliable structures capable of protecting oil and gas and, in general, acting in this region in the American interests.

True, sooner or later, Trump will have to “answer for his words” and return American soldiers home. But in this case, Washington can get out. For example, in the province of Deir ez-Zor, they can place fighters of American private military companies, which are also controlled by the Pentagon, but formally will be completely independent from the American leadership. Financing of such formations is planned to be carried out from the proceeds from the sale of the same Syrian oil produced in Deir ez-Zor.

Recently, the United States has begun to be very apprehensive about the advance in Turkey of Syria - a kind of military-political ally in NATO. Of course, the attitude towards Turkey is much better than towards Iran, but the American authorities still want to protect the oil-bearing regions of Syria and from Ankara.

Since the Syrian Kurds are currently financially dependent on the United States, the American leadership may try to use Kurdish formations to destabilize the general political situation in the region and put pressure on their opponents - Syria, Turkey, Iran and, of course, Russia.

How such a scheme will look, one can quite easily imagine. US troops will establish control over key oil fields, after which Washington will deliver an ultimatum to the Kurds: either you do what we say, or we deprive you of access to the money received from the sale of Syrian oil. And the commanders of the Self-Defense Forces and the Syrian Democratic Forces as a whole, in this case will have to act in the interests of the United States, fulfilling the tasks that the American military command will set before them.

Another plausible explanation for the continued US military presence in the region is the possible start to the construction of an oil pipeline that would link the Deir ez-Zor fields with Israeli Haifa. Through this pipeline, oil from Iraqi Kirkuk and the Syrian province of Deir ez-Zor will be delivered to the terminal in Haifa and then exported through the port of this Israeli city. If the project is successful, about 5 million barrels of oil per day will be exported. That is, you can imagine what kind of income we are talking about.

Moreover, through the implementation of this plan, Iraqi oil from Kirkuk and Syrian oil from Deir ez-Zora will be able to be sold around the world. Therefore, the American leadership is so anxious to maintain control over the Syrian oil fields, as well as over the Syrian-Iraqi border. It will not be Washington who will compromise its political and economic interests, especially in the case when a hostile Iran may turn out to be the beneficiary. 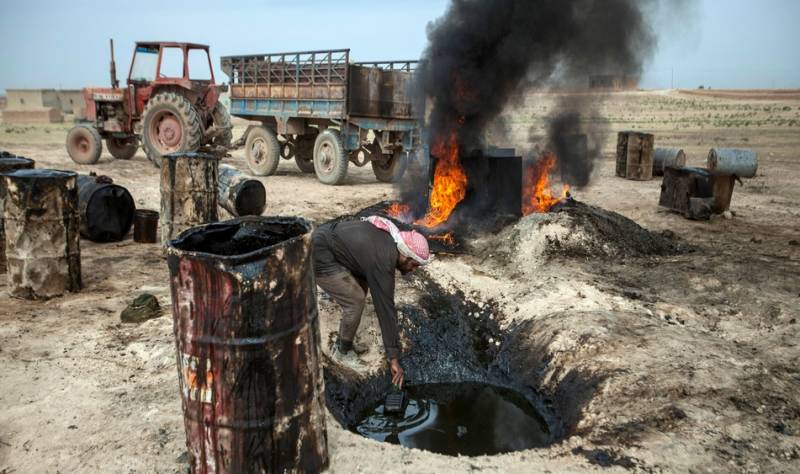 The construction of an oil pipeline from Iraq to Israel via Syria is fully in line with the economic interests of both the United States and Israel, and the Arab and Kurdish forces in Syria they patronize. But such an ambitious project can hardly be feasible without the consent, albeit tacit, of other important players - Syria and Russia.

So far, Russian officials have openly said that American troops, remaining in Deir ez-Zor, will rob Syrian oil fields. Even Russian Foreign Minister Sergei Lavrov in his speeches emphasized that there was an outright robbery of Syria by the Americans.

But propaganda, albeit in the form of official statements, is one thing, and the real situation is slightly different. The checkpoint on the border of Syria and Iraq, which was opened as part of the implementation of this project, is controlled by government forces, which indicates a certain participation in the project of official Damascus, and, therefore, Moscow agrees to this. It is not for nothing that the Turkish media, which are difficult to suspect of sympathy for the Syrian Kurds, drew attention to this nuance, speaking about plans to build an oil pipeline from Kirkuk to Haifa.

In any case, one thing is clear: American troops, regardless of Donald Trump's biased statements, will not leave the eastern regions of Syria. And this means that talking about some kind of stabilization of the situation in the Middle East is premature. As long as the US military presence in the region continues, the overall political situation in the Middle East, not only in Syria, but also in other countries, will remain tense.