US lost helicopter and two military personnel in Afghanistan 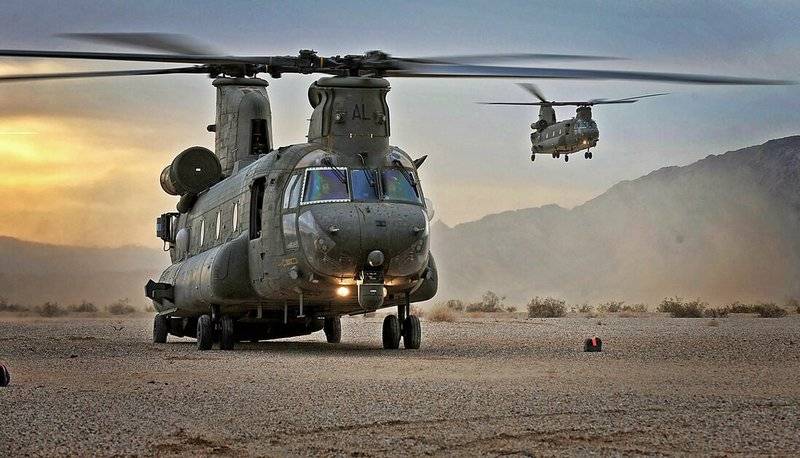 The American military contingent in Afghanistan has lost the Chinook military transport helicopter. As a result of the crash of a helicopter, two US Army personnel were killed. This was reported by Reuters, citing a statement by the command of the operation "Strong Support".


According to the agency with reference to the US military, the Chinook military transport helicopter crashed on Wednesday in one of the provinces of Afghanistan. As a result of the crash, two US troops were killed, names are not given at the request of relatives. As stated in the command, the causes of the helicopter crash are unknown, but it was definitely "not shot down by militants."

The cause of the crash is being ascertained, however, according to preliminary data, there is no reason to argue that it was caused by enemy fire
- said in a statement.

Other details of the incident are not given.

Afghan media confirm the crash of a helicopter with the death of two US troops. According to local news agency Pajhwok, the US Army Chinook military transport helicopter crashed in Logar province in the east.

At the same time, the Taliban movement banned in Russia gives details of the crash, stating that the helicopter was shot down at night by the militants in the area of ​​the village of Pangram, Shar county, Logar province. The helicopter fell from a height and completely burned down. The crash killed not only two US troops, but also more than fifty Afghan soldiers who were transported by the Chinook military transport helicopter.

The helicopter was shot down at one in the morning near the village of Pangram in the territory of Sharh county, Logar province. The helicopter crashed and completely burned down, all the foreign and Afghan soldiers on board the 54 died
- said the official representative of the Taliban Zabihulla Mujahid.

The US Army and the Afghan authorities have not yet commented on this information. On the one hand, the Taliban traditionally take responsibility for the attacks and deaths of American and Afghan troops, on the other hand, this is done some time after the publication of official data, and not immediately with the publication of details of what happened.
Military Reviewin Yandex News
Military Reviewin Yandex Zen
41 comment
Ad