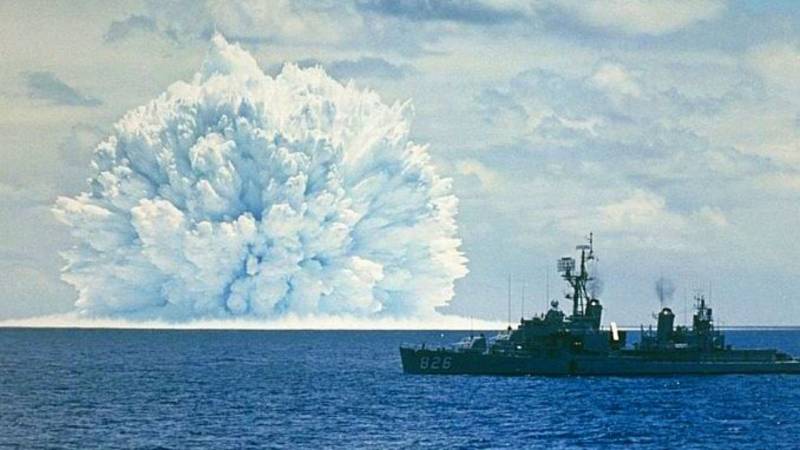 Submarine nuclear explosion, Domenic project, 1962 year
The years of the Cold War gave the world a large number of nuclear images weapons. This is not only a matter of strategic offensive arms and intercontinental ballistic missiles. During the confrontation between the USA and the USSR, a huge number of tactical nuclear weapons were developed in two countries, from conventional aerial bombs and artillery shells to deep nuclear bombs designed to combat enemy submarines. In the Soviet Union, the nuclear anti-submarine complex, which included the Be-12 amphibious aircraft, received the sonorous name “Scalp” and was adopted by the 55 years ago - in the 1964 year.

In the arms race, one of the parties has always tried to catch up with the other, developing similar or even more advanced models of weapons and military equipment. The first domestic deep-sea nuclear bomb created in the USSR in 1964, which became part of the anti-submarine aviation complex, was a response to the development of the American defense industry. The US military got its deep-sea atomic bomb in the 1950 years, launching another round of the arms race between the countries.

At the same time, the interest of Americans in the creation of such weapons was well-founded. The Soviet Union made a conscious bet on the creation and development of a powerful submarine fleet. Soviet submarines, which were armed with the first ballistic or cruise missiles, including those equipped with nuclear warheads, became a real threat to the coastal cities of the United States and Washington's European allies. Under these conditions, the Americans considered any possible methods of guaranteed destruction of the Soviet submarines and quickly enough came to the idea of ​​creating a deep air bomb with a nuclear warhead. 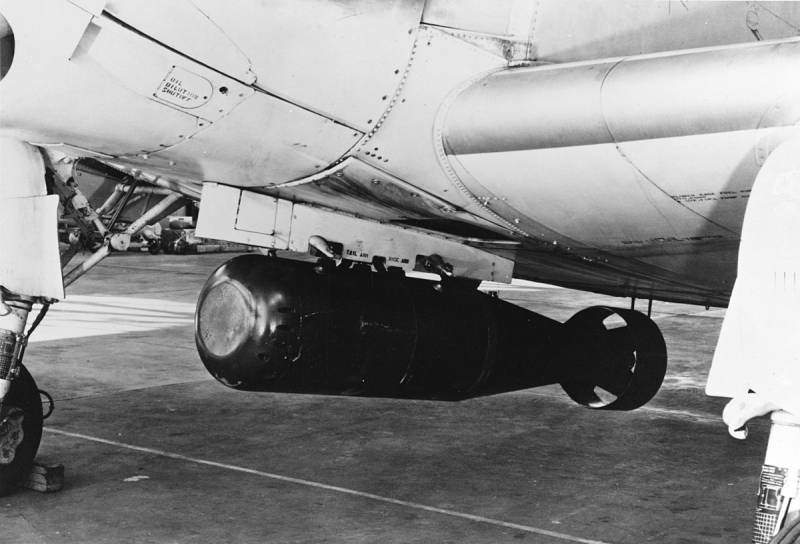 Mark 101 Lulu U.S. Nuclear Depth Bomb Suspended Under AD Skyraider
A distinctive feature of the entire line of American nuclear depth charges were female names. The world's first anti-submarine aircraft bomb, which received a nuclear charge of the W-7 type with a power of approximately 5-10 ct, received the beautiful female name Betty. A variety of types of aircraft could use such ammunition, including outdated vehicles, which at that time included A-1 Skyraider piston attack aircraft and S-2 Tracker carrier-based anti-submarine aircraft. For the same purposes, the American P6M Seamaster turbojet amphibious aircraft could be used, which the US military rated as not the most successful aircraft in its class. The first American deep nuclear bombs did not last long in service, they decided to abandon them by the 1960 year. It is believed that over the entire production period, 225 Betty nuclear bombs were assembled.

Despite the abandonment of Betty, interest in deep-sea nuclear bombs did not disappear, on the contrary, the threat from the Soviet submarine fleet only increased every year, and the naval command considered submarines with nuclear weapons on board as a real strategic threat. The Betty bomb was replaced by a much more sophisticated and powerful bomb, which received another female name, Lulu. The Mark 101 Lulu airborne depth bomb received a W34 nuclear warhead with a power of approximately 11 ct. This ammunition was produced in five different versions and remained in service with the U.S. Navy from 1958 to 1971 year. New weapons were stored not only at American bases; bombs of this type were also actively supplied to US allies in the NATO bloc. It is known that the Lulu bombs were stored at the British Cornwall air base, they could be armed with the Royal Air Force Avro Shackleton aircraft.

The deep-sea nuclear bomb Mark 101 Lulu reached a length of 229 cm, its diameter was 46 cm, and such a bomb weighed 540 kg. The carriers of weapons dangerous for any enemy submarine were not only the base patrol aircraft, which included the P-2 Neptune and P-3 Orion models, but also the A-3 Skywarrior and A-4 Skyhawk attack aircraft and even helicopters, for example SH-3 Sea King. At the same time, specialized patrol planes could take on board a couple of these bombs, which increased their ability to combat enemy submarines. 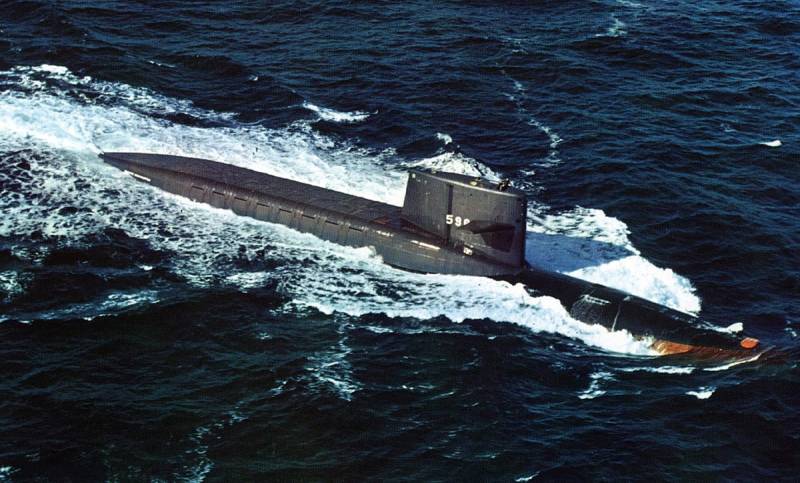 A submarine of the George Washington type, which was supposed to be the target of Soviet nuclear depth charges
The main disadvantages of the Lulu bombs, which the Americans themselves admitted, were the lack of sensors for fixing free fall. In simple terms, the bomb did not have an important element of the safety device that would activate the operation only after being dropped from the plane and freely falling from a certain height. For this reason, the bombs were quite dangerous to handle. If such a munition brought into a fighting position, rolled off the deck of an aircraft carrier and fell into the water, the bomb would simply explode when it reaches a predetermined depth.

The Soviet response to the creation of deep-sea nuclear bombs by the Americans was the Soviet bomb SK-1, an 5F48 product, also known as the Scalp. For the first time, the task of creating a complex of bombs and aircraft that could effectively deal with enemy submarines was formulated in the USSR in 1960, then the first specifications of the future project approved by the Navy command came out. By that time, the Soviet military already knew that the enemy had similar weapons. At the same time, the Soviet nuclear depth bomb was also developed as a response to the emergence of new nuclear-powered strategic missile submarines of the George Washington type, armed with ballistic missiles. Such boats posed a huge threat to the fleet and infrastructure of the USSR in the event of a war moving from a cold stage to a hot one.

Work on the creation of new weapons was carried out quickly enough and already in 1961, the first samples of new depth charges were transferred for factory tests. Tests of new ammunition without nuclear charges on board were carried out at a special marine training ground located near the Crimea. The Soviet designers were planning to use the new bomb together with the successful Be-12 Chaika turboprop flying boat, created by Beriev Design Bureau specialists. A special modification of the seaplane was designated Be-12SK. In 1964, the joint tests of the nuclear depth charges and the Be-12 aircraft were completed, and the ammunition was officially adopted. The new Skalp aviation anti-submarine complex became for the time the most powerful anti-submarine weapon of Soviet naval aviation. In 1965-1970, the complex was equipped with three anti-submarine regiments of long-range aviation, as well as two marine anti-submarine squadrons. 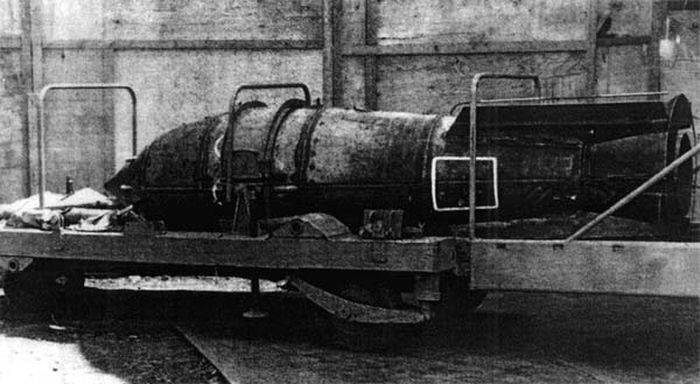 Soviet nuclear depth bomb "Scalp", 5Ф48
Workers of the VNII-1011 of the Ministry of Environment (directly, the Russian Federal Nuclear Center - Academician Zababakhin All-Russian Scientific Research Institute of Technical Physics in Snezhinsk) were directly responsible for creating the bomb. The company, which is part of the Rosatom Group of Companies, today specializes in creating various types of nuclear munitions. It is not known how much the name of the work “Skalp” was associated with the project, but it can be said with certainty that the Soviet deep-sea bomb SK-1 could “scalp” any submarine of a potential enemy, effectively dealing with both the light and the sturdy hull of the boat .

The SK-1 bomb weighed about 1600 kg, another 78 kg fell on the weight of a special beam holder, which was installed in the Be-12 cargo compartment. In this case, the approximate ammunition power was estimated at 10 ct. The Be-12SK flying boat could take on board only one such bomb, while on the plane it was still possible to suspend conventional bombs, torpedoes and buoys. The SK-1 bomb (5Ф48) was intended for use from altitudes from 2 to 8 kilometers, and the munition detonation took place at a depth of 200 to 400 meters. In this case, air and contact fuses on the bomb were absent. To destroy submarines that were in shallow water, a delayed response in time was provided in addition to the already existing values ​​(20,4 and 44 seconds, respectively) equal to approximately 100 seconds from the moment of ammunition landing. This time was enough for the carrier to leave the danger zone. One of the features of the nuclear depth bomb and the complex was the need to maintain the air temperature in the compartment at 16-23 degrees Celsius, this was an important condition for the reliable operation of a nuclear charge. According to the results of the tests, the Scalp could hit any submarine that was located at a distance of 600-700 meters from the site of the bombing. 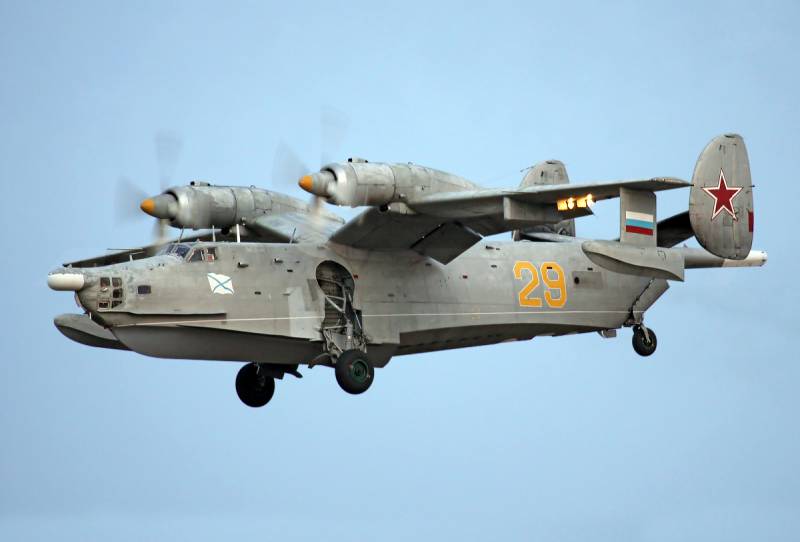 Be-12 "The Seagull"
Over time, new nuclear deep-sea munitions began to come to replace the Scalpam. By the 1970 year in the USSR, it was possible to establish the release of a new weapon - the ryu-2 bomb (8Ф59), which was included in history as “Skat” or, as it was affectionately called in the Navy, “ryushka”. The advantage of the new bomb was that it could be used not only from the Be-12 seaplane, but also from other domestic anti-submarine vehicles - Il-38 and Tu-142, and in the future also anti-submarine helicopters.

We are in Yandex Zen
The nuclear baton of the US Navy (part 3)
An-12 in Afghanistan
Military Reviewin Yandex News
Read Military Reviewin Google News
22 comments
Information
Dear reader, to leave comments on the publication, you must to register.