Eternal glory to you, knight of heaven! 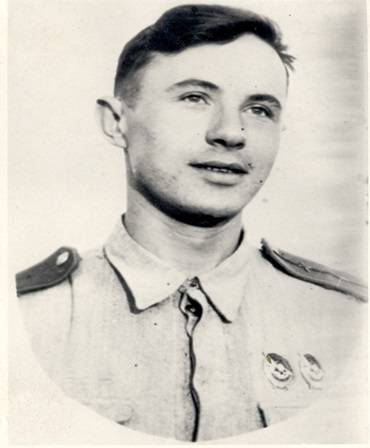 Many outstanding pilots did not return from sorties. Many died on earth. In August 1944, undefeated bandits killed the pilot-ace of the guard, Senior Lieutenant Mikhail Stepanovich Likhovid and his comrades. A fighter pilot with a considerable combat score, along with his colleagues, could not fight off the gang of Ukrainian nationalists ...

Future ace M.S. Likhovid was born 28 February 1922 in the village. Mogritsa (Sumy region) in a peasant family. In the mid-thirties, the family moved to Lugansk. In 1936, Likhovid entered the newly opened secondary school No. 25 and got a job at a steam locomotive plant. In 1938, he graduated from high school with a gold medal.

After graduating from high school, M. Likhovid went to the capital to enter the Moscow Institute of Civil Air Engineers fleet. In parallel with training, he studied at the flying club and mastered the skills of controlling aircraft. After completing training, in 1940 the future pilot went to the Red Army. Given the existing education, the Red Army soldier Likhovid was sent to the Kachin flight school.

In May 1941 M.S. Likhovid graduated with a degree in fighter pilot and received epaulettes of a senior sergeant. Soon the war began, and the young pilot was assigned. He was sent to Voznesensk (Odessa Military District), where the formation of the 298 th fighter aviation regiment was underway. 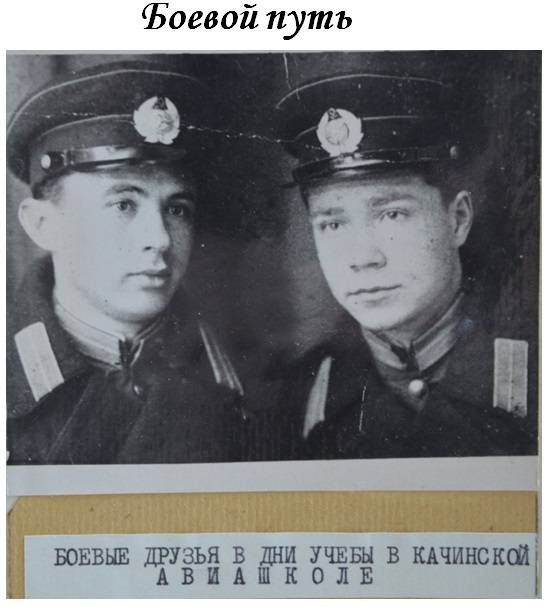 Likhovid with a friend during training in flight business. Photo school №25 / lug-school25.ucoz.ru
The command of the regiment understood the insufficient level of training of the young pilots and was in no hurry to send them into battle. Only at the end of the summer M. Likhovid and his comrades completed the study of the staff of the regiment and began training in flying skills. Meanwhile, the more experienced pilots of the 298 IAP took part in air battles with might and main.

In early autumn, the regiment received several I-16 fighters from repair, and one of them was intended for st. Sergeant Likhovid. However, due to a lack of technology, the car had to be shared with a friend. Soon, young pilots were first sent to solve a real combat mission. Link I-16 under the command of Art. Lieutenant Zotov was supposed to attack the enemy crossing across the Dnieper.

For more than a year, the pilots of the 298 IAP, working as part of the Southern and Transcaucasian Fronts, flew for attack, to intercept and to cover their bombers. Young pilots gained experience and contributed to deterring the advance of the Nazis.

At the end of 1942, the battered regiment was sent to retrain on new equipment. Another batch of P-39 Airacobra fighters arrived from across the ocean, intended for the unit. In February, pilots in new machines returned to the North Caucasus and continued their difficult work.

21 March 1943 Mr. M. Likhovid won the first air victory - while in the group. Five Soviet fighters intercepted and successfully shot down four Ju-52 transport aircraft. Three days later, Likhovid as a part of his pair shot down a Bf-109 fighter. A week later, a couple of pilots destroyed another Messerschmitt. 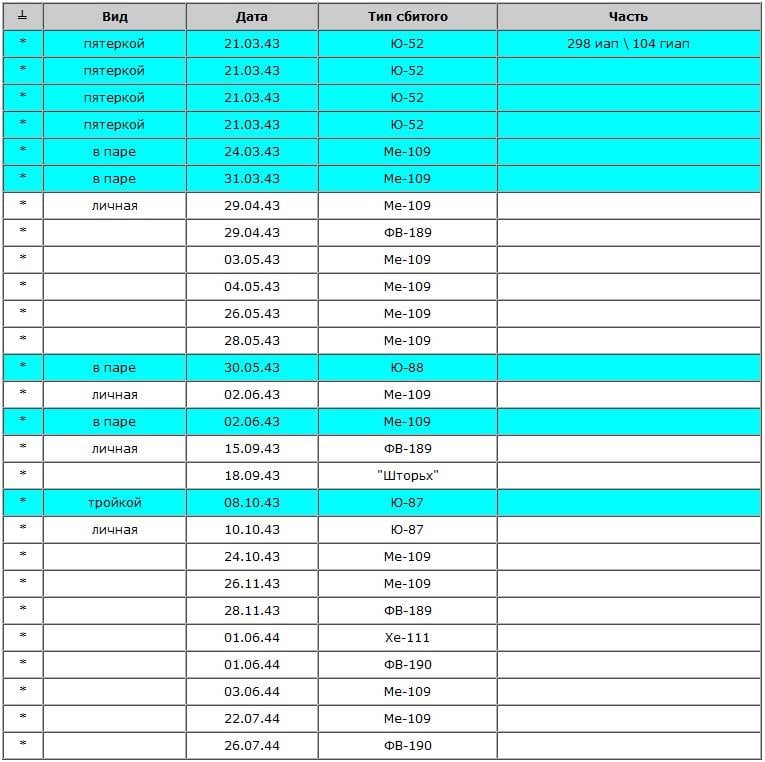 Battle score M.S. Likhovida according to Airwar.ru
In the battle of 29 in April of that year, Likhovid won his first personal victories. He shot down an FW-189 reconnaissance aircraft and a fighter covering him. This was followed by new successes. During the fighting in the North Caucasus pilot M.S. Likhovid performed 45 sorties and participated in 8 air battles (4 shot down personally and 6 in the group), as well as in 11 assault flights. In April, the 1943 th pilot was introduced to the first Order of the Battle Red Banner. A second performance appeared in June, and in November the pilot was awarded the third order.

By the middle of the year, the regiment was transferred from the North Caucasus to the Kuban, where work continued. Fighter pilots performed all the necessary tasks and helped to free the captured lands. M. Likhovid and his comrades honed their skills and immediately used them in the fight against the enemy.

Noting the merits of the 298th IAP, in August 1943 the command reorganized it into the 104th Guards Fighter aviation regiment. M. Likhovid’s personal merits are shown by his combat account: from March to December 1943 he shot down 13 enemy aircraft personally and 9 in the group. 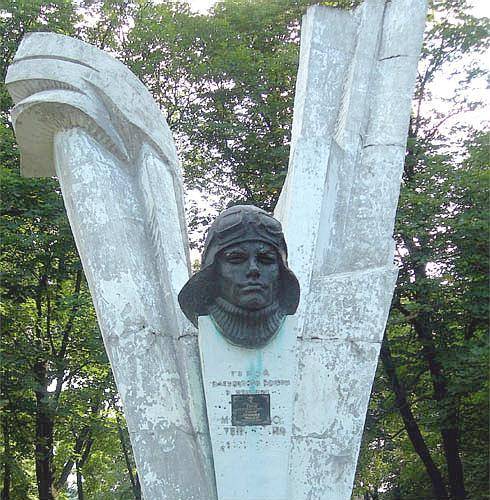 Monument in the village of Magerov near the place of death of the pilot and comrades. Photo Airaces.narod.ru
Senior Lieutenant Likhovid carried out his last combat missions of the guard in early August 1944. Shortly before that, he joined the CPSU (b) and received the post of deputy squadron commander. From the beginning of the war, the pilot made 208 sorties, participated in 44 air battles and in dozens of assault strikes. For all the time, the ace pilot shot down 16 enemy aircraft personally (according to other sources, 18) and 11 in the group (according to other sources, 9). Also on the account of the fighter 6 aircraft at airfields, several steam locomotives, 1 river boat and dozens of cars.

In early August, the 1944 th regiment M.S. Likhovida participated in the liberation of Lviv and the surrounding areas. After the next battle, one of the pilots (according to some reports, Likhovid himself) made an emergency landing on the field. On 12 on August, the senior lieutenant with his comrades went to the landing site to return the car to the airfield.

To the damaged "Aero Cobra" we got on the lungs of Po-2. The technicians completed the necessary minor repairs, refueled and prepared the plane for departure. However, take-off was not possible due to rain and poor field conditions. Pilot M.S. Likhovid, mechanic of the guard, junior technician-lieutenant A. Kh. Krasnyansky and gunsmith of the guard, senior sergeant S. A. Fonkevich (according to other sources, Stankevich) remained at the plane, and the comrades returned to the airfield. 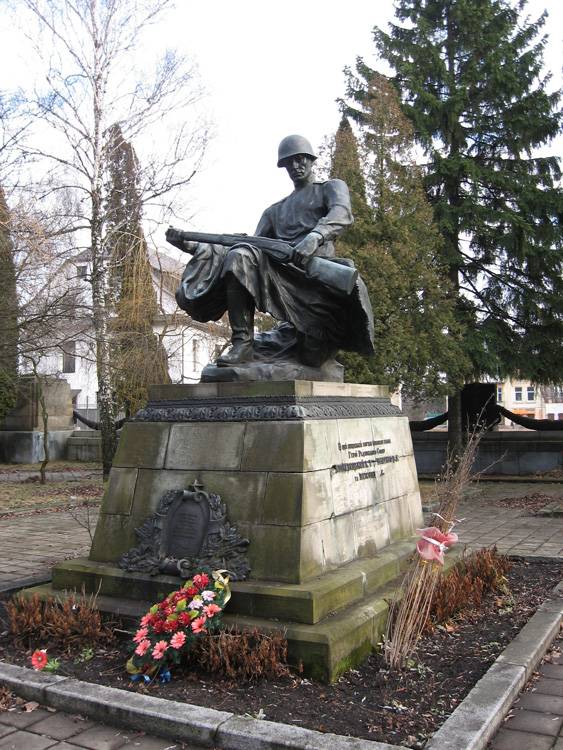 Mass grave on the Hill of Glory in Lviv. Wikimedia Commons Photos
A search team arrived at the scene. She found on the plane a lot of bullet holes and other damage. The car was looted, the remaining units were damaged. Not far from the plane they found the remains of a fire, as well as the charred bodies of Likhovid and Krasnyansky. Fonkevich was missing.

It was possible to restore an approximate picture of what happened. At that time, gangs of local nationalists traded in the Lviv region. One of these horse units found the pilot and his comrades and attacked. Likhovid, Krasnyansky and Fonkevich fired back and managed to inflict tangible damage to the enemy, but the forces were unequal. Bandera brutally dealt with them and tried to burn the bodies, and then plundered the plane.

The dead were buried in the city of Rava-Russkaya. In 1975, the ashes were transferred to the mass grave on the Hill of Glory in Lviv.

Having heard this sad news, Commander Pokryshkin took off his cap and said quietly:

- Eternal glory to you, knight of heaven! - and ordered to the chief of staff: - Prepare a performance for the Hero.

The memory of the hero

The hero’s name was the quarter in Voroshilovgrad and school number 25, where he studied, as well as a team at a diesel locomotive repair plant. Sumy Museum of Local Lore collected an exposition dedicated to the deceased pilot. The corner of military glory was opened at school with. Mogritsa. Monuments and memorials were installed: in the city of Lviv at the burial place and in the village of Magerov, not far from the place of death.

Memorial in Lviv, incl. grave M.S. Likhovida is in poor condition. Burials are systematically raided by vandals. Well-known political forces advocate the destruction of the graves of soldiers and commanders of the Red Army. A different situation is observed in Lugansk. They carefully preserve the memory of a fellow countryman-hero.