A century and a half in the service: what were the Russian archers armed with 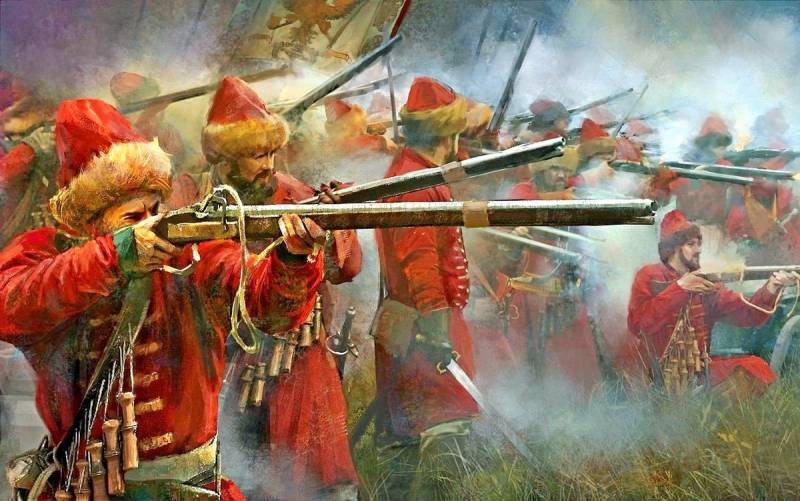 In 1550, Tsar Ivan IV the Terrible, by his order, established a new structure - the Streltsy army. Instead of pishchik militias for the first time in the domestic stories a regular army was created to fight with the help of cold and firearms weapons. For the next one and a half centuries archers became the most important component of the army. To solve combat missions, the archers had to rely on a developed weapons complex, which improved as the service continued.

The main objective of the archers, as well as their predecessors, was the firing on the enemy troops. To solve this problem at different times, the archery army was armed with squeakers and muskets of different classes and types. According to available historical sources and archaeological finds, one can observe the development processes of small arms of the troops. 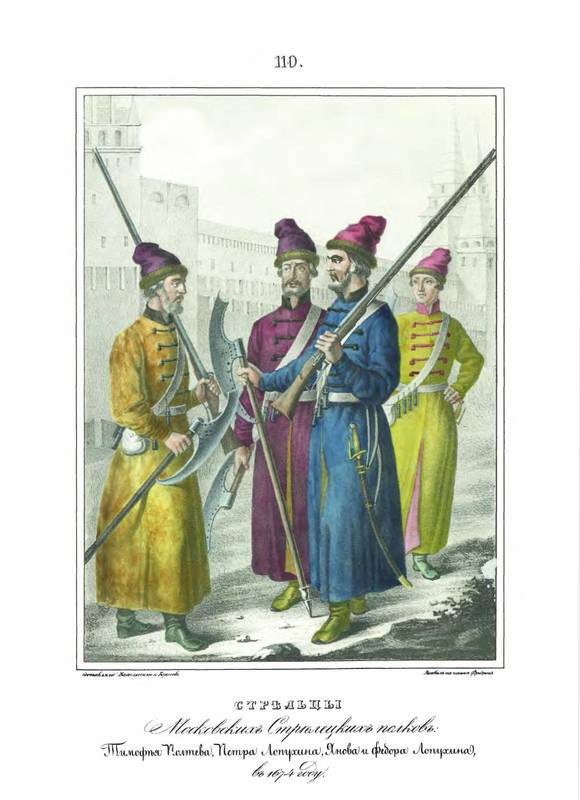 Sagittarius of the Moscow regiments, the end of the XVII century. Illustration from the "Historical Description of the Clothing and Arms of the Russian Forces" A.V. Viskovatova
Sagittarius received hand squeaks from predecessors. It was a smooth-bore muzzle-loading weapon with a wick lock or with a gag. The early squeaks of Russian archers were similar in design to the European arquebuses of their time. It was the food that was the archer’s main weapon. During the battle, the warriors were supposed to hit the enemy with massive fire. Other weapons were considered as auxiliary. 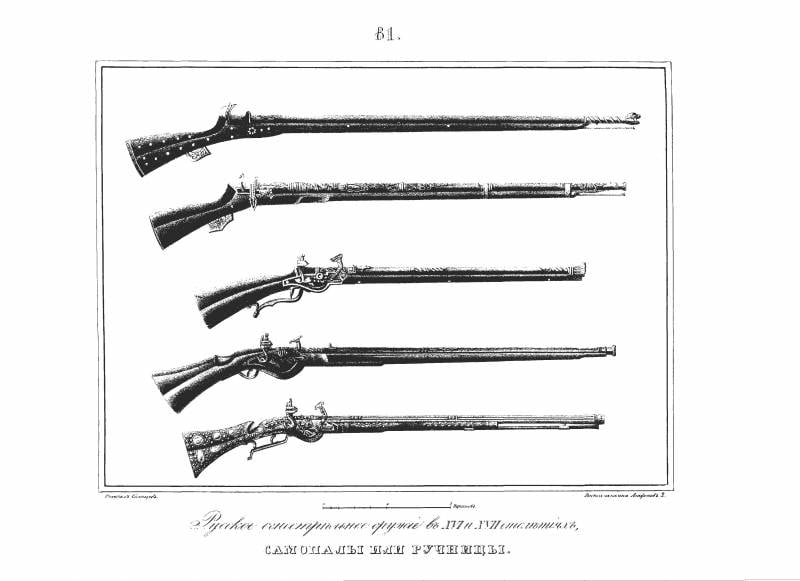 Archers' firearms. Illustration from the "Historical Description of the Clothing and Arms of the Russian Forces" A.V. Viskovatova
The squeak included equipment elements necessary for transporting the ammunition. Sagittarius wore a berendeyk band over his left shoulder, on which hung nests for gunpowder and bullets, as well as a powder flask. All these devices made it possible to obtain an acceptable rate of fire from not the most perfect muzzle-loading squeakers.

According to the charters, archers received gunpowder and bullets immediately before the campaign. The remaining ammunition after returning should be surrendered, which allowed the state to save on the maintenance of troops.

Wick squeaks for a long time remained the main weapon of archers. However, at the beginning of the XVII century. they have their first flintlock guns. The mass introduction of such weapons has noticeably dragged on. It is believed that this was due to the complexity and high cost of guns, as well as difficulties at the stage of launching its own production. As a result, both foreign and domestic guns of various craftsmen with different designs and characteristics were in service.

Nevertheless, the rearmament was able to launch and implement. By the middle of the XVII century. the documents record not only the need for the purchase of gunpowder and lead, but also the requirements for the supply of flints for rifles. However, the decommissioning of obsolete wickers was noticeably delayed. The archers remained with such weapons almost until the end of the XNUMXth century. 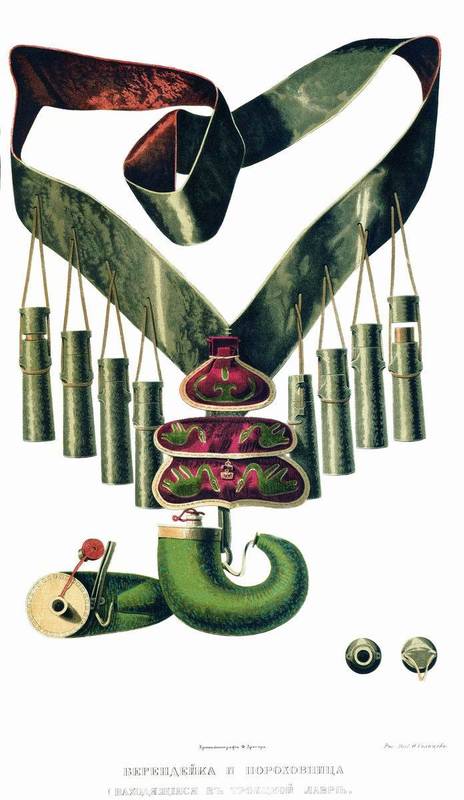 Berendeyka with nests and a powder flask. Illustration from the "Antiquities of the Russian State", F.G. Of the suns
In the second half of the century, a new modernization of firearms began. Abroad and in our country, “screw squeaks” - rifled weapons began to spread. Roughly in the seventies, such systems begin to enter the streltsy army and gradually its share is growing. However, rifled systems were notable for their high complexity and cost, due to which the pace of rearmament was again low. Smoothbore guns remained the basis of the archery weapons complex for a long time.

It is curious that the replacement and modernization of the main weapon had almost no effect on the composition of the equipment. Berendeyka with nests and a powder flask remained and continued to fulfill their functions. This was facilitated by the preservation of some basic principles of the work of regular weapons.

The introduction of rifled weapons was the last step in the modernization of the "fire battle" of archers. Such systems, together with auxiliary weapons, have been used for several decades - until the disbandment of the Streltsy regiments. Then they moved on to the new armed formations of the Russian army.

The main objective of the archers was the fire defeat of the enemy. However, they retained cold steel and pole arms, mainly for self-defense in situations where the use of a squeak is impossible or difficult. In general, the cold weapons of the Streltsy army repeated the complex of infantry armaments of that time. 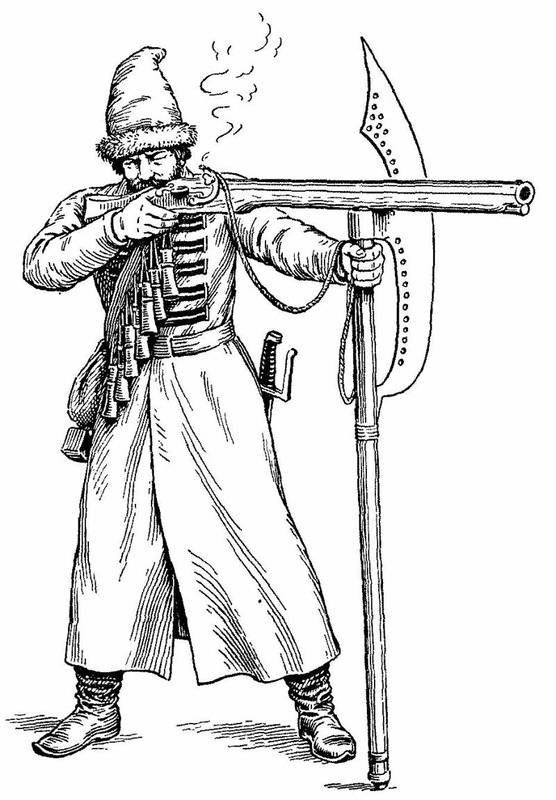 Sagittarius fires from a squeak, leaning on a berdysh. Illustration from the "Small Arms" A.B. Beetle
On the left side, on the belt, the Sagittarius wore a scabbard with a saber or sword. Sagittarius received the same blade weapons as other Russian warriors. During the existence of the Streltsy’s armed forces, they managed to visit various designs of sabers and swords with one or another feature. In all cases, such a weapon was intended to fight with an approaching enemy. In view of the specifics of the archers' combat work, it was often a question of self-defense.

Archers received a berdysh from the infantry - a special kind of battle ax with an elongated blade and a long pole. Berdysh performed two main functions. In close combat, it should have been used in a regular way as a chopping weapon. When firing, it became a bipod for weapons: a squeak box was put on the butt, which simplified aiming and shooting.

During the XVII century. there was some change in the complex of weapons associated with the features of the work of archers of various specialties. So, the commanders eventually lost their firearms, the use of which could be difficult. Their weapons consisted only of a saber and protazan - a long spear with a special tip. Bearers and musicians for self-defense had only sabers. 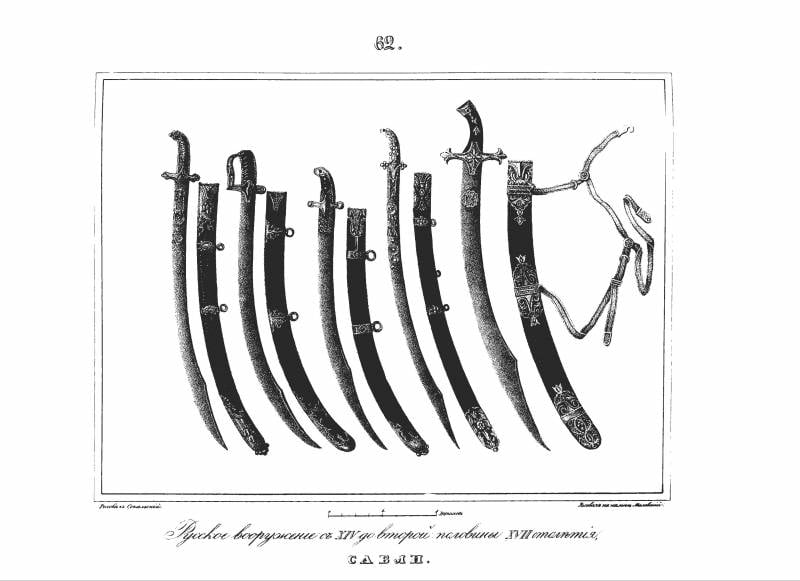 Sabers of the Russian army, including archers. Illustration from the "Historical Description of the Clothing and Arms of the Russian Forces" A.V. Viskovatova
At the beginning of the XVII century. the first units of pikemen appear in the streltsy army. These fighters armed themselves with long peaks and swords. Their weapons were intended to strengthen the defense of the streltsy formation and effectively protect against the characteristic threats of that time.

At the beginning of the XVII century. in the records for the first time there is a fundamentally new weapon for archers - hand grenade nuclei. They were compact and relatively light cast ammunition with powder filling and the simplest wick fuse. They should be thrown in the direction of the enemy manually, which limited the range of application. However, the damaging effect compensated for all the shortcomings.

Hand grenade nuclei received limited distribution, but nevertheless they were issued and distributed between streletsky orders. At different times and in different regiments, hundreds of units of such weapons were kept in storage, and, if necessary, they were used.

The Streltsy army was formed in the middle of the XNUMXth century. and existed until the beginning of the XVIII century. For more than a century and a half this component of the army has come a long way and has noticeably changed. First of all, weapons were developed that were directly used to solve combat missions.

Archery uniforms, armament and equipment at the State Historical Museum. Photo: Wikimedia
It is easy to see that the evolution of archers' armaments was based on the most modern ideas and solutions. It was far from always possible to introduce modern models on time and in the desired quantity, but the tendency toward the development of the troops can be traced quite clearly. In updating the material part, the Streltsy army actively used both domestic and foreign ideas and models.

Such an approach made it possible to maintain high combat efficiency of the troops, but had characteristic flaws. First of all, there was no unification of weapons and ammunition, which led to certain problems. The first measures aimed at establishing uniformity apply only to the second half of the XNUMXth century, however, a real effect in this direction was obtained even later.

At the beginning of the XVIII century. the Streltsy army was liquidated and new types of regiments replaced it. However, the armament complex of archers and part of their equipment remained in service. With these or those changes, guns and muskets, berdysh and sabers became part of the armament of the modernized troops, where they were soon supplemented with completely new models.