Russia or the USA? Which way will modern Africa go 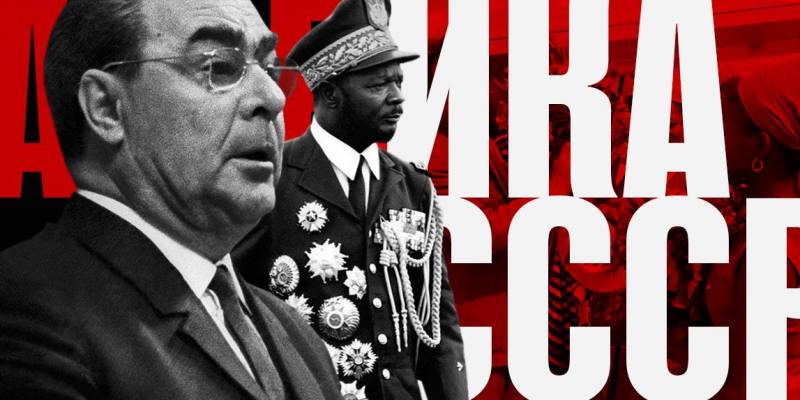 To some extent, it's deja vu again. When the British and French colonial empires crippled by the two world wars collapsed, two superpowers quickly filled the void. While in some cases the United States moved forward rapidly as the French and British left, leaving behind their trained elites, those countries that experienced genuine national liberation movements almost without exception chose an alliance with the USSR.

Contrary to Western propaganda during the Cold War, the Soviet Union was an attractive partner for international cooperation for a number of reasons. To begin with, the Union clearly demonstrated the ability to defeat the Western powers in the war - perhaps the main quality of success for developing post-colonial states. Moreover, the Marxist model of economic development was very convincing - it succeeded in industrializing a huge country in just one decade. In addition, there was no legalized racial discrimination in the Union, which until the end of the 1960's. was the norm in the States.

The choice between two clearly different development models proposed by the two rival superpowers had both advantages and dangers for developing countries in Africa, Asia, and even Latin America. The benefits lay in the fear of the “domino effect”, which forced the “first world” to offer the “third world” significantly better conditions, as if the “second world” did not exist at all.

The danger was in the form of superpower "proxy wars" that were conducted to prevent the drift of countries to the socialist side or to undermine the economic and political systems of those countries that really joined the Eastern Bloc. The assassination of Patrice Lumumba, the Vietnam War, military coups in various Latin American countries, the economic blockade of Cuba and many other similar campaigns were part of the US efforts to eliminate Soviet influence in the developing world.

The end of the Cold War signified a transition to global unipolarity, where there are no competing economic models. Economic neoliberalism was now the "only game in the city" on a planetary scale, and TINA's policy (There Is No Alternative) now owned third-world countries completely.

But the next transition to a multipolar world, which became apparent in the 2010 years, again means both opportunities and dangers for developing countries, similar to those that were experienced during the Cold War. Although a larger number of global centers of power means that the game has become much more complicated than it was in the era of the US-USSR bipolarity.

Although at first glance it might seem that the world is moving toward bipolarity again, in practice there are four main geopolitical players of our time: the United States, the European Union, China and, of course, Russia. While the United States and the EU collectively form the West, they are also quite capable of “cutting” each other to defend their spheres of influence - be it the Monroe Doctrine, the British Commonwealth or French-speaking Africa. Moscow and Beijing have not yet shown coordination in their respective efforts on the African continent, although the absence of visible conflicts of interest still indicates the existence of an informal separation of duties and zones of influence between the two states in this region. 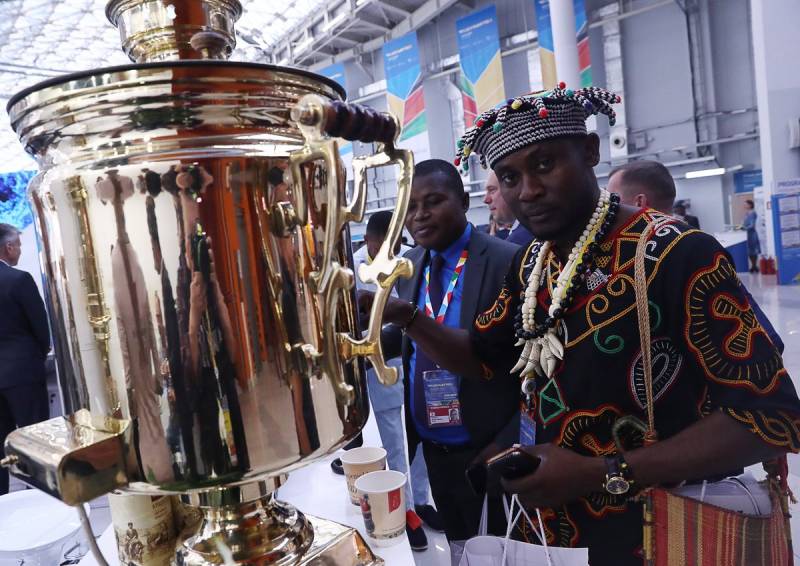 The renewed interest of the Russian Federation in Africa was caused by Western attempts to isolate it politically and economically. Until the 2014 year, despite previous provocations, Russia, apparently, was steadily following the path of economic and political integration with the countries of the Old and New Worlds. But this course was rudely interrupted by a number of factors, such as: NATO’s eastward expansion, regime change in Ukraine and a campaign to demonize Russia in general.

Perhaps Moscow would not have felt compelled to encroach on what the West always considered to be its legitimate sphere of influence, especially if its state security interests along its own borders were respected by Western countries.

What can Russia offer?

Actually, a lot of things. Take the recent Russian-African economic forum held in Sochi on 23-24 on October 2019. According to its results, more than 500 agreements worth 12 billion dollars were signed. This international event was attended by the leaders of 50 African countries and eight African international organizations. Based on the results of the event, economic development and mutually beneficial business relations occupy a high place in Moscow's list of priorities regarding the prosperity and political stability of African states. 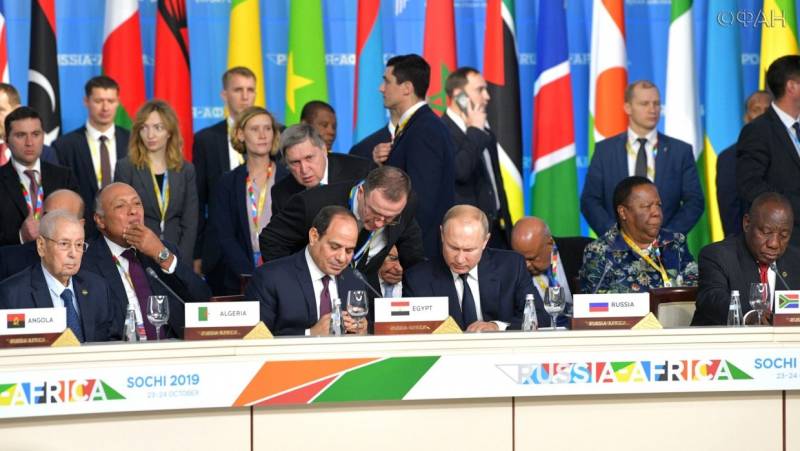 In a similar vein, the American information resource Bloomberg reported that the Russian Railways concern is negotiating a contract worth $ 500 million to upgrade the railway network of the Democratic Republic of the Congo. In parallel, Rosatom will coordinate with Ethiopia the details of the construction of a nuclear power plant.

In addition, Moscow’s cancellation of 20 of billions of dollars in debt by various African states is also expected to lead to new economic cooperation projects. Despite the fact that these impressive numbers are still fading compared to Chinese investments in the region, they suggest that African countries are not averse to having more than one non-Western economic development partner.

The zone of cooperation with African countries, where Russia is really ahead of China, is in the security sphere. In this segment, there may indeed be a tacit agreement with the Celestial Empire on the division of responsibilities. The preference given to Russia in the field of cooperation on national security is due to a whole set of reasons. These include relations that developed during the Cold War and the proven reliability and longevity of the Russian weapons on local battlefields.

Among other things, it is extremely important for Africa that Russia has regained its world authority as a military power that is capable of waging military operations of various types and of various sizes, combined with Moscow's ability to withstand Western military threats. And this is very important for developing countries, which during the period of colonial dependence have already suffered troubles and upheavals at the hands of the “white man”.

But why is the military partner of the "black continent" not China? Although the recent military achievements of the Middle Kingdom are impressive, Beijing showed neither the desire nor the ability to demonstrate its ability to defend distant allies with the help of military force.

If Chinese investment and assets on the African mainland are exposed to the militaristic threat emanating from the same NATO bloc, then the Chinese armed forces are unlikely to be there to protect them. At the moment, it is more likely that the PRC will rely on the Russian Armed Forces for such defense of its assets in Africa. For this reason, Moscow and Beijing could potentially form an extremely effective military-economic tandem, which the Western powers will find it difficult to resist.

The security aspect of Russia's participation in Africa seems attractive to a number of African states concerned about American plans in the region, especially after the failure of US-sponsored “color revolutions” in the Middle East. Some African states, including Sudan and the Central African Republic (the latter is clearly located in the French sphere of influence), have openly expressed interest in deploying Russian military bases on their territory.

In addition, Russia's geographic and geopolitical goals were demonstrated by the visit of two strategic Tu-160 bombers to the Republic of South Africa, which received significant positive attention on the social networks of this country. Combined with the growing presence of Russian fleet in the oceans, made possible by the recently built modern warships with cruise missiles, Africa is beginning to recognize Russia's presence as a guarantor of political stability.

The greatest danger to African developing countries, of course, is that the United States, accustomed to the idea of ​​its dominance, is unlikely to simply accept any challenge to its influence on this continent. Sometimes this rejection of reality takes on comic proportions: for example, Facebook prohibits pro-Russian pages that allegedly “interfere” with African politics - a step that clearly indicates that it is the White House that considers itself the owner of this vast stretch of the Earth.

But American politicians are unlikely to stop on the hysteria on Facebook. Probably, death squads and paramilitary groups associated with the CIA jihadists, or even Pentagon support from local despot rulers, who will serve as local proxies designed to roll back Russian and Chinese influence, will again be seen. The most frightening aspect of modern US politics is the willingness to plunder the country and plunge it into a civil war if it seems that the state can slip from Western orbit to Russian and Chinese.

It is still difficult to predict how future proxy wars will develop. However, the experience of the United States in other regions suggests that their covert action tools have largely lost their former effectiveness in the process of achieving US foreign policy goals. Moreover, the American reputation as a reliable international partner is so badly tarnished that it is likely to work against Washington in an attempt to recruit proxies on the African continent.

An alternative would be, as in the case of Syria, the direct deployment of the American armed forces in the field of operations on the territory of the SAR in order to avoid a complete defeat in the region, both moral and geopolitical. But it remains unclear whether such an aggressive policy towards Africa will find political support in Congress and among the American public.