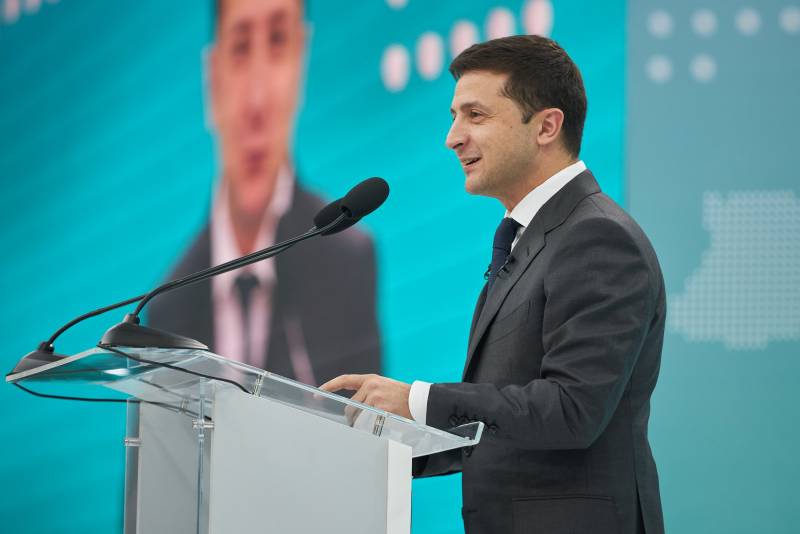 Donbass in anticipation of important changes ... The Norman meeting will take place very soon ... Zelensky, Macron and Merkel confirmed the date of the meeting in the "Norman format" ... A solution to the problem of the Ordlo can be found later this year ... Such headlines in the media, to be honest, amuse me. Like numerous statements by “talking heads” on Russian and Ukrainian television.


What solution? Republicans agreed to voluntarily go to a concentration camp? Donetsk and Lugansk really want to become a ghetto, where "subhuman" will live? Kiev agreed to all the conditions of the republics and is ready to create autonomy in these territories?

May there be no meeting at the beginning of December this year! No matter what the “big people” say with Bankova, from the Champs Elysees and from Willy-Brandt Strasse. No matter how much everyone wants to solve the problem of the civil war in Ukraine ... To meet for the sake of "discussing the problem"? What for?

It’s strange: why did political scientists and analysts grasp so tightly at Putin’s words about the possibility of holding a “Norman meeting” this year? After all, in fact, these words are just words, and nothing more. It is clear that such a meeting can take place in only one case. And everyone knows about it!

After a conversation between the leaders of Europe, Russia and Ukraine, some kind of, possibly a new document, a new road map should appear, new deadlines for ending the war are defined. But (we will take into account the numerous mentions of Donbass at various press conferences of Vladimir Putin) Russia is in favor of implementing the old agreement!

It is completely incomprehensible to me why in Ukraine they still believe that the Donbass is just an obedient kitten in the hands of Moscow. Yes, Russia spends a lot of effort on preserving the Donbass, on helping the Donbass. And economic, and diplomatic, and all others. But on the other side?

On the other hand, we see an announcement on the wanted list not only of the leaders of the republics and well-known politicians, but also of ordinary soldiers and officers of the people's militia, local leaders, even school teachers and doctors. For aiding the invaders. And where do these people go? To Moscow or Rostov?

From your own home? From the graves of fathers and mothers? Will they leave? Those who, from the 2014 year, fought off the APU and the punitive, will leave? Will they get scared and run away? The kitten in the hands of the Kremlin has long grown into a tiger. And he will fight to the last. It’s cruel to fight, to death. Whatever from here, from Russia, they didn’t tell him.

These people saw their own prisoners after being held in democratic prisons of the SBU. They saw wounded soldiers of the militia who were shot dead in broken positions ukrovoyak ... Ultimately, today it would be strange if the Republicans continued to believe the statements of Kiev and Moscow. Friendship is friendship, and tobacco is apart.

Ukraine wants to just talk, not fulfill the agreement

Why am I sure that there will be no meeting in early December? Why do not agree with those who have already prepared fanfare for the solemn victory parade? I will start with a simple fact, but hardly noticed by our media. With Nazarbayev!

Remember the recent statement by this highly respected politician in Moscow about Kazakhstan’s readiness to hold an informal meeting between Putin and Zelensky in Nursultan? Unlike Zelensky, Nazarbayev is a very experienced and respected politician. From this we can draw a simple conclusion: the meeting was prepared. So what?

The response of Vladimir Putin was made specifically at a press conference after the BRICS summit. "Run to unprepared meetings" the Russian president refused! The Russian president does not see the point in empty talk. What can you agree on one on one with Zelensky? Alas, there is nothing yet. He will still not be able to fulfill the agreements.

There is another important factor that plays against the meeting in the near future. This is the understanding that in the leadership of Ukraine today there is complete strife on the issue of Donbass. Zelensky declares his desire to end the conflict, but at the same time strengthens the army group in the CAB.

Foreign Minister of Ukraine Vadim Pristayko declares the same desire, but literally at the next press conference he talks about the possible refusal of Kiev from the Minsk agreements. And again, judging by Putin’s statement, the Kremlin notices this and draws conclusions. In addition to the Kremlin, this is openly spoken in Donetsk and Lugansk.

Further. According to the Minsk agreements, Kiev should switch to direct communication with the Republicans in the field of legislative initiatives. In particular, after a month and a half the law on the special status of Donbass ends. So what? Zero! Kiev is thinking. But the extension of the law or the adoption of a new law should be coordinated precisely with Donetsk and Lugansk!

I will allow myself to quote again the statement by Vladimir Putin at a press conference after the BRICS summit, but in light of the above:
“In principle, a“ Norman format ”and a meeting in a“ Norman format ”are possible. In general, except for the "Norman format", there is no other mechanism. "
“We hear from Ukrainian officials that another law on the status of Donbass could be adopted. Which one? ”

What does it mean? Putin is a rather tough politician. She will not be guided by the tales of Kiev about the new law on the status of Donbass. And the Ukrainian president is doing well to create the conditions for refusing to meet the leaders of the Norman four perfectly. Otherwise, how to understand this?

To summarize the past events. So, Ukraine is not going to implement the Minsk agreements. There is no understanding of what Ukrainians want from these agreements. “For all good versus all bad” or “for world peace” does not pass here.

Zelensky’s desire to transfer the discussion of the problems of Donbass to the level of presidents is understandable. He, even for some reason, thinks that involving the leaders of the leading European countries in solving some technical issues will be his first foreign policy victory.

But is it a victory? Macron, Merkel and Putin will not participate in the round table to discuss the civil war in Ukraine. And delaying the solution to the problem will lead to increased internal confrontation in Ukraine itself.

Putin is ready to speak only if Ukraine is ready for concrete steps to end the war. If the issues are really resolved, without which the Minsk agreements are simply not feasible. Especially the law on the special status of Donbass. Moscow announces this almost daily. But on Bankovaya, officials had their ears pledged.

Time is playing against Kiev today. DNI and LC have already been born as states. Not “there were elements of an independent state,” namely, “born as state entities” with all the elements of an independent state. This means that there will be no more 4-5 years of war. There will be a proclamation of a new or new state. By the way, not the smallest in Europe.

So the euphoria about the meeting of the leaders of the Norman four is at least premature. At best, Merkel, Macron, Putin and Zelensky will be able to wish each other a Merry Christmas or a Happy New Year ...

We are in Yandex Zen
Results of the week. "Aria of the Moscow Guest"
Situational analysis of the death of the MH17 flight (Malaysian Boeing 777), made on the basis of engineering analysis from 15.08.2014
49 comments
Information
Dear reader, to leave comments on the publication, you must to register.