How a tank will drown me. Confession of the destroyer 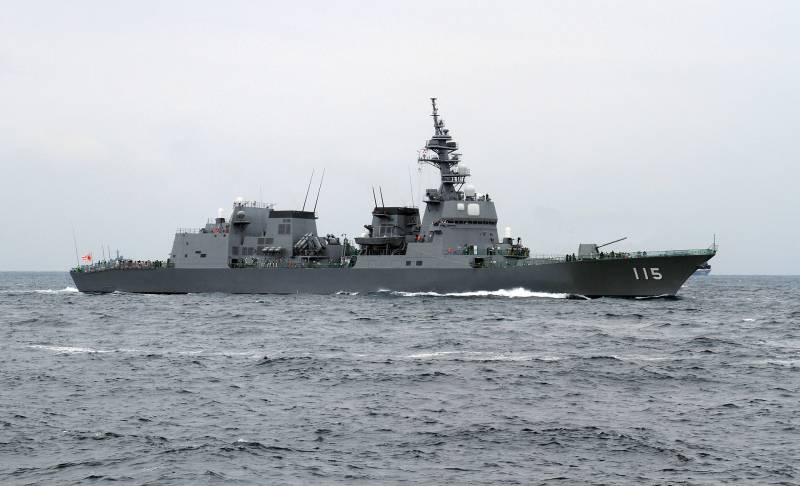 Greetings to all who read these lines! Allow me to introduce myself: the destroyer destroyer of the naval self-defense forces of Japan "Akizuki".


The heir, so to speak, of the "Akizuki" who valiantly fought in World War II. Well, not that valiantly, it was just unlucky for torpedoes. But only the third was sentenced, and this, you know, not every cruiser could stand it.

As expected, we monitor everything that happens in your / our territories. We cannot but follow, because this is a sore point for almost 80 years.

Interesting recently reached us news about Sakhalin. Very interesting, and so much so that I can’t pass by. The depth of the issue does not allow.

Sensei pen, are you serious? No really?

The article is autumn gold and pink smoke at the foot of Fuji in one bottle. I would like to quote, at the same time imbued with my own powerlessness and realizing that the power of a neighbor is what should permanently push us away from the Kuril Islands.

But - only quotes on your part and discussion with mine.

Reactive Tanks protect the coast of Sakhalin and break up the enemy’s landing if necessary. "The fire capabilities of the upgraded T-80BVM have grown so much that they can not only destroy armored vehicles, but also sink enemy ships."

Ships ... Tanks can sink ships ... It sounds. I even want to compose a kind of hockey, but ... But let's just think about it. Ship - that sounds proud. This is not some kind of ship for you, the ship is a fighting organism. Yes, almost like a tank, only the dirt does not like and the crew is more.

Here I take myself. Hypothetically (then I will explain how it is) I’m going to cover the landing. To Sakhalin. Yes, we went over sake and went. By a formidable force, in accordance with the Bushido Code and all that.

As far as we all know, and we know, we will get up five kilometers from the coast. Why? Yes, because the guns of your tanks shoot at 3,7 km. So you can stand in 4,5 km and be calm in the sense that not a single shell will reach.

Of course, if a regiment is set against me, then by ammunition we will be equal. The rest will be sad, because I still have a fire control system, albeit not like the Atago, which was installed with the Arly Burke ... But not bad, especially since our specialists in electronics (I hope that, that we have them, you won’t doubt) dopped it a little to a high level.

But the funny thing is that neither I nor the same Atago, except for the cannon, have anything to support the landing. Well, the participation of our ships in such actions is not planned. Therefore, we have anti-aircraft missiles, there are anti-submarine missiles, some ships even have anti-ship, but we didn’t deliver them with what to work on onshore facilities.

Theoretically, of course, you can equip the Atago and Asigaru with the Tomahawks, but this is more likely theoretically. Since it is theoretically possible to install the anti-ship version of the Tomahawk. No one has tried. 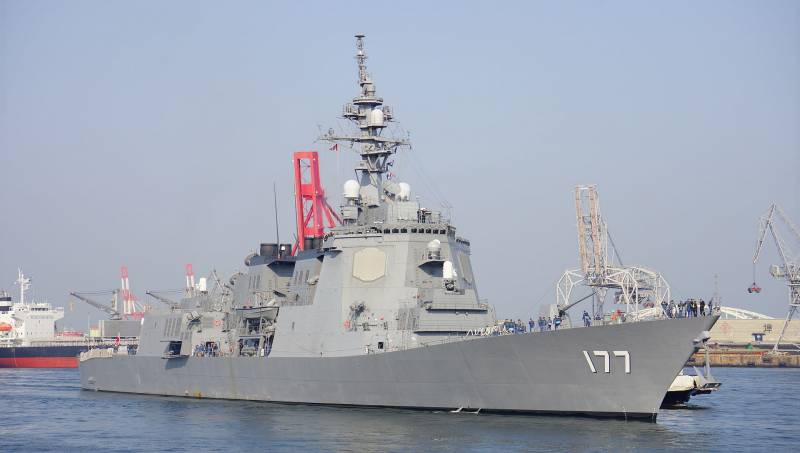 In general, ending the topic weapons, I’ll just remind you that we have such gizmos as destroyers, aircraft carriers. Yes, Izumo with comrades. Each of which can take on deck 14 "Sea hawks."

A helicopter is the most effective weapon against a tank. And replacing anti-ship missiles with anti-tank missiles at Sea Hawke is not as difficult as it seems. Of course, if the coastline is saturated with air defense, then of course yes. The task becomes very difficult.

But we are considering a hypothetical fairy landing on the islands.

“The main task of motorized rifles on the island is to repel sea landing in the event of a military conflict. The most effective tactic for such actions is the destruction of the enemy at distant approaches. And the T-80BVM is just right for this, said military historian Dmitry Boltenkov. "

It’s good that it’s not a “military expert”. We still respect the Russian army. But here I want to note that, apparently, we have a different understanding of the term “distant approaches”.

Here we would be “from distant approaches”, that is, kilometers from 10, using the capabilities of Spy in particular and Aegis in general, we would just try to deal with tanks, since they are the most significant weapon on the island, and with the fact that they will be covered.

“For the Far Eastern units, combat vehicles are undergoing a major upgrade to the level of T-80BVM.
In addition, the machine can now fire missiles. It was specially installed on it a complex of guided weapons "Reflex", which allows you to hit sea targets at long distances. The system uses a laser beam to target supersonic missiles launched from the barrel of a gun.
The range of their flight is about 5 km, which is 2 km longer than conventional tank shells. "

This, of course, is scary. The expert scared. It’s a pity, I forgot to mention that the Reflex ATGM has a mass of combat charge of about 4,5 kg. Danger for the helicopter, dangerous for the tank. To the warship ... So, tickle the nerves.

Of course, now many can say that all this horror is intended for those means on which the landing will be landed.

I agree that we have 6 air cushion landing boats, 2 just landing boats, three Osumi-type dock ships. For a normal landing operation with counteraction by a more or less decently organized defense line, this is nothing.

So, we have to tear ourselves. That is, destroyers. Hypothetically, 33 of our destroyers will not be able to do this. Virtually nothing. There are no missiles that can effectively work on coastal targets.

No, if the American partners throw the “Toporov” - not a question, but ... Laughter and tears come out.

Of course, given the fact that the Japanese fleet in the future will be cooler than the Russian one, any buildup of forces in the region will be useful. Especially if you build up wisely. Not as written in the article.

I was frightened by the Ball from the slipway. White comes out this dance, that is - one-time. And the tanks ... 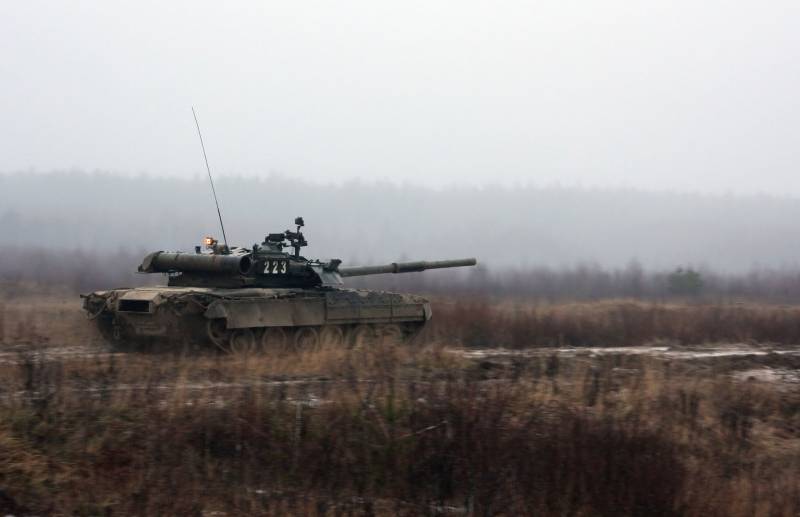 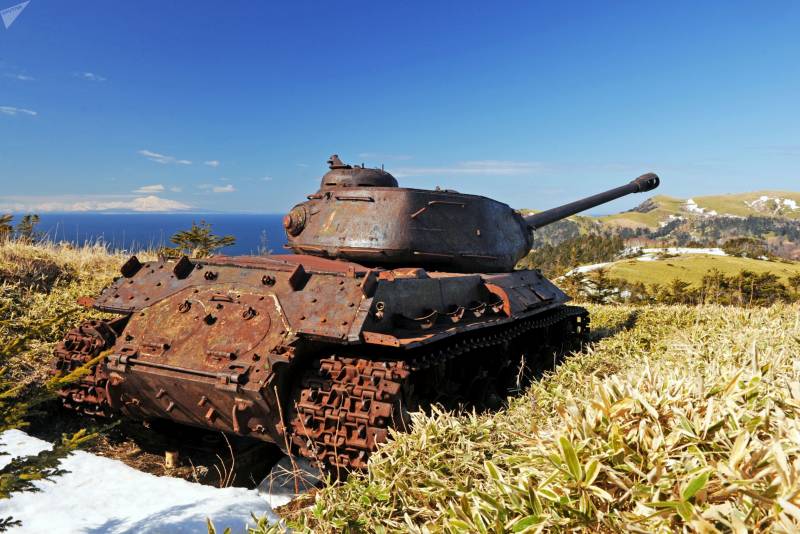 No, a tank is a useful thing to fight against a landing. Especially if it is really fast and modern.

“Instead of the usual diesels, gas turbine engines (GTEs), which sound like helicopter engines, were installed on military vehicles.”

Habitual? Most of the tanks just skated their service on gasoline engines. What is more familiar is hard to say. Yes, in 1976, the GTD was something so supernatural. Today, it can be seen as a kind of eccentricity, because diesel is both simpler and more familiar.

Moreover, Ukrainians in the 1987 year nevertheless slapped a diesel into the T-80. And nothing, everything worked decently like that.

“The gas turbine engine provides the T-80BVM with unique speed and maneuverability. Thanks to their high mobility, tanks can patrol the entire coastline. This will allow you to quickly transfer firearms to dangerous areas. "

And with a diesel tank stands still? If you look at the performance characteristics, the difference between the gas turbine engine and the diesel in 10 km / h. If such an advantage is “unique” - not a question.

But all this is doubtful. Tank - he is good when his head does not hurt. For the air first.

So, you know, neighbors, we, perhaps, will not come to war. Not that a tank is a stumbling block for a destroyer, no. Just these tanks will be difficult to pick out. Not impossible, but difficult.

And if without too much fuss, then I think that the answer to such an original move lies in these words:

“At the time of adoption, the T-80 was the best in the world,” said the expert. “Today, its upgraded version fully meets all modern requirements.”

It’s clear that the electronics have added, but ...

But I think that the main thing here is another phrase.

"At the storage bases of the Ministry of Defense there are about 3 thousand who have not passed the modernization of the T-80."

Here is the answer to all the questions.

Indeed, why bother with modern weapons, when there are so many tanks in storage ... Now we’ll upgrade to the level of T-80ABVGD, and everything will be fine.

What lately touches in our bigwigs from the army, is the principle of approach itself.

That shunned the Americans to change the caliber of small arms. They announced this. Everyone who wished to earn such money came together, chose the best.

Here, by the way, knowing that “Heckler-Koch” flew with his NK416 like plywood over Paris, and realizing that it was 416 I, I just don’t understand what they got in the end. This is generally some kind of space was supposed to be.

And we say that “here’s an excellent T-80 tank, with which you can kick any landing party.” Why are there any rockets, radars, all that is needed is the T-80! The best tank of the 1976 of the year!

It looks strange, to be honest.

Yes, a tank on the defending side of the islands is a topic. With tanks it is always easier to defend than without them.

But the phrase sounded about distant approaches - it somehow somehow does not fit well with tanks. According to marine concepts, the tank in front of it spits out of the cannon, and missiles from the gun barrel will also scare a few at sea. And not all vessels will be afraid of the “insane” rate of fire of a tank gun.

For some, the speed and accuracy of a tank gun is simply not scary, since speed decides a lot at sea.

If someone is concerned about the defense of Sakhalin and the Kuril Islands, this should be done as if not relying on tanks. Tanks - this is the last argument, the landing code is already splashing towards the shore. But to send this landing to the bottom, while it is somewhere on the way — this is more or less a task.

But not for tanks.

In general, you can say a lot of clever words about how to organize the defense of the islands, but ... It must be done in a complex!

And early detection tools, and artillery (especially long-range), and missile systems, and aviation. And of course, if all of the above are suddenly screwed up, then the brave infantry, coupled with tanks and support artillery.

In general, we must start by understanding the following figures: in which case the 38 destroyers of the “self-defense forces” and 4 of these strange hybrid destroyer-helicopter carriers are serious. And our Pacific Fleet, to put it mildly, is too tough for the teeth.

Yes, with the landing ships, the Japanese are about the same as ours. That is shitty. But you know, if it suddenly lights up, they will sail to the Kuril Islands on bamboo rafts.

On the whole, I would like to wish my colleagues before loudly beginning to be enthusiastic about the next “wise” decision of the military department: it’s probably worth watching and thinking how real it is wise.

So it’s clear that to re-preserve the tanks, maintain, upgrade, redeploy ... Everyone will get a penny. But whether it will become a ruble in wartime, that is the question.

We are in Yandex Zen
The tragedy of the American army ("The Atlantic", USA)
Results of the week. “In our cooperative, the board is always agreed”
131 comment
Information
Dear reader, to leave comments on the publication, you must to register.