Little Belgium was the first victim of German aggression. 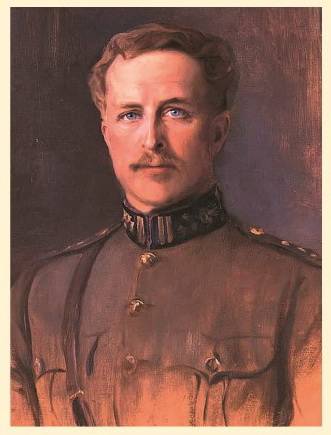 Albert I (1875 - 1934) is the King of Belgium from December 17 to 1909 from the Saxe-Coburg-Gotha Dynasty. King of Belgium Albert became a real hero of the Great War. His figure gained great popularity in Europe thanks to the bold and courageous deeds of the young monarch. After heavy defeats from Germany, Albert was not at a loss and led the army himself. Under his leadership, the small forces of Belgium held their bridgehead until the very end of the war, and then successfully acted in the decisive offensive of the Entente. For successful actions as commander in chief, Albert received the honorary name "King Knight". His fame came to England, where the collection "King Albert's Book" was published, dedicated to the king and people of Belgium. Particularly noted the head of the Union State, Russian Emperor Nicholas II, who awarded Albert I with the Orders of St. George of the 4 and 3 degrees.

The Belgian army entered into an unequal battle with the Germans - actively participating in the Frontier Battle of 1914 (special hopes were assigned to the Liège and Antwerp fortresses), after which most of the Belgian territory was occupied by the Germans.

So, during the defense of Liège 5 - 16 on August 1914, the garrison of the fortress under the command of General J. Lehmann became the first serious obstacle to the German forces. 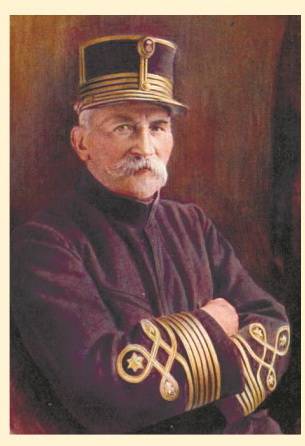 Gerard Lehman (1851 - 1920) - Belgian military, lieutenant general. The commandant of the Liege fortress during her defense in 1914
The Kaiser command planned to take the fortress with a simple assault and dispense with siege weapons. However, the first attacks of the German troops were repelled by the Belgians. The calculation of the Germans was not justified, and they retreated, suffering huge losses. Only with the help of powerful artillery systems, among which was the 420-mm "Big Bert", the fortress was taken. Nevertheless, the reinforcements of Liège and the courage of his defenders fulfilled their task, having detained the German army for the period of time necessary to mobilize the armies of Belgium and France. 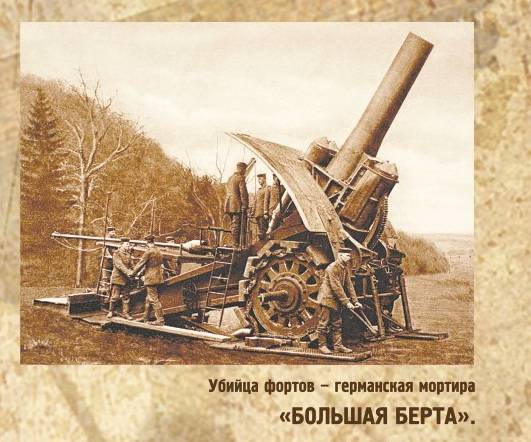 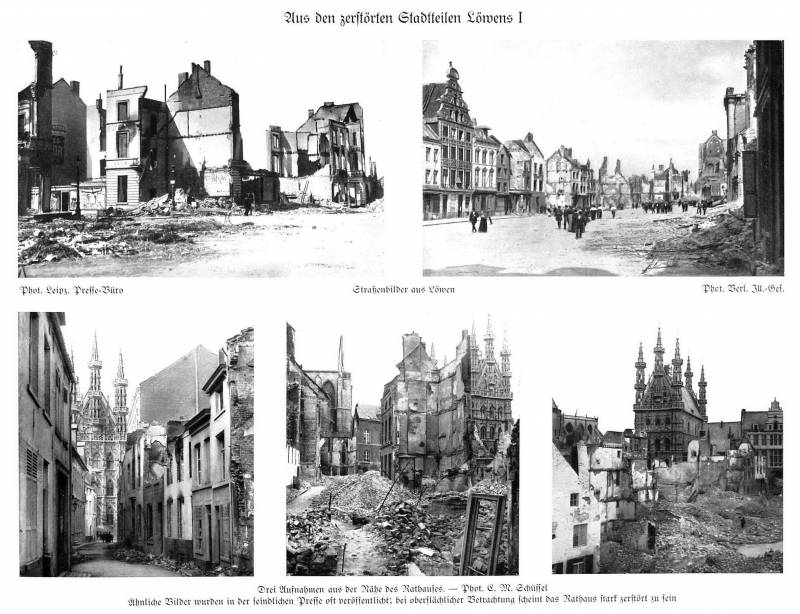 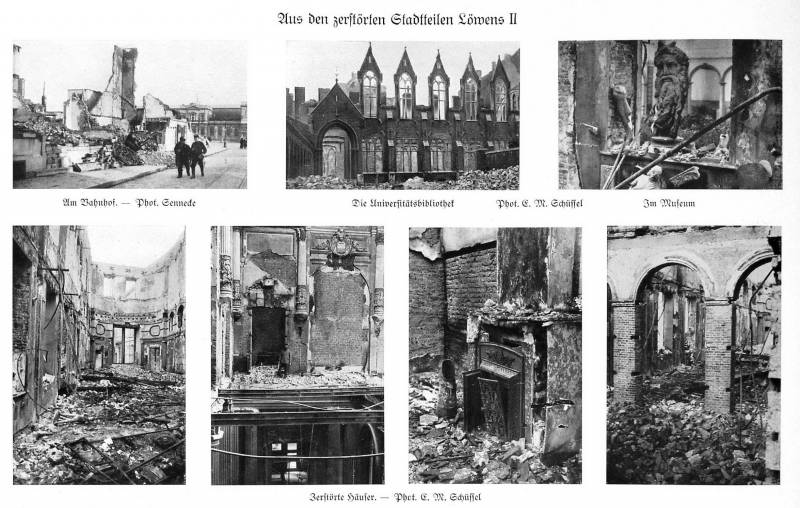 Ruined Louvain
But the Belgian army, led by Hero King Albert I, retained a piece of their native territory - which became the site of the Western (French) front frozen for the long 4 years. The Belgian army is a participant in Run to the Sea operations (1914), Ypresian battles and operations in Flanders in 1915 - 1918. 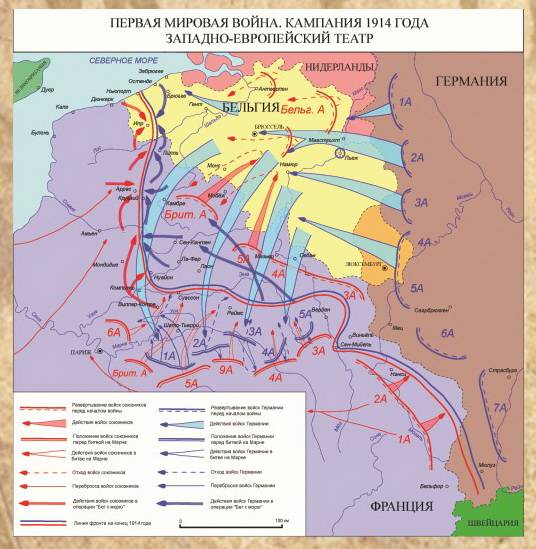 So, in the Battle of Ysera 16 - 31 on October 1914, units of the Belgian, French and British armies took part. After the Germans occupied Brussels, the exhausted Belgian army defended along the river. Iser. King Albert himself took command of the troops. In his proclamation, he called this line of defense the last frontier to be defended at all costs. For 6 days, Belgian troops defended themselves against a numerically superior enemy under powerful artillery fire, repelling continuous attacks up to 15 times a night. Turning the tide of the battle helped an unexpected decision - the Belgians flooded the low valley of the river. Ysera by the sea, opening the floodgates of the dam at high tide. The German offensive was stopped. Despite heavy losses, the Allies won a strategic victory. 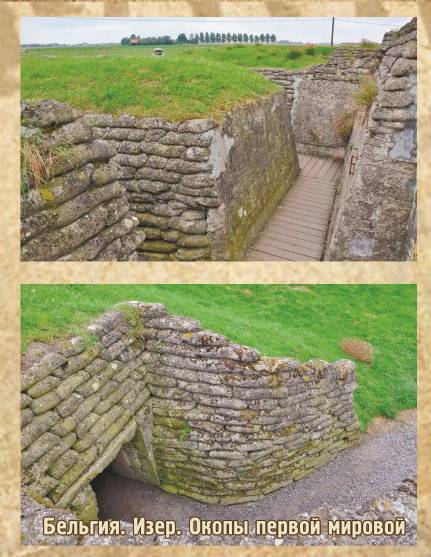 And during the offensive in Flanders, 28 of September - 20 of October 1918, the Belgian divisions acted as part of the general allied offensive. The offensive was preceded by a German strike in the spring and summer of 1918, after repulsing which, the armies of the Entente countries and Allies of the Entente moved forward. Moreover, the actions of the Belgian army, operating in the battles of Ypres and Curtre, were one of the most successful. During the Flanders operation, the allies managed to advance 100 km, and King Albert's army advanced farthest.

The Belgian army’s operational contribution was to actively oppose Schlieffen’s strategic planning (in particular, a significant number of German troops held Antwerp), and then to stabilize the Western Front and (generally) successfully retain its defense sector.

Belgian troops took an active part in the fighting in Africa.

In the 1918 campaign, the group was doubled - and in February 1918 the Belgian army already consisted of 12 infantry (110 active battalions) and 1 cavalry (24 squadron) divisions.

Military-technical inventions in the service of the Belgian army

The Mauser M1889 is a Belgian rifle from Germany. In 1889 in Germany, a rifle designed for a new cartridge with smokeless powder was designed at the Mauser factory in Germany. In the homeland it weapon did not take root, but the license for its production was bought by Belgium, where it was adopted. A special enterprise was created for the production of Mausers in Belgium, and during the German occupation during the First World War, refugees who left the country were placed at a factory in England, where they continued to work for the benefit of the front, producing these rifles. In various versions, this weapon has been in the arsenal of Belgium for more than 50 years. 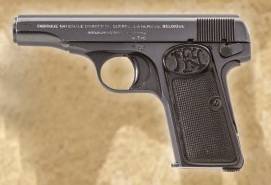 The weapon that unleashed the war: Browning pistol. It was from this pistol, the birthplace of which is Belgium, that the Serbian terrorist Gavrilo Princip killed the heir to the throne of the Dual Empire, Archduke Franz Ferdinand and his wife Sophia Hotek, which served as the occasion for the outbreak of hostilities of the First World War. Browning pistol models have gained worldwide fame due to their reliability and simplicity. In Russia, Browning was popular among officers. 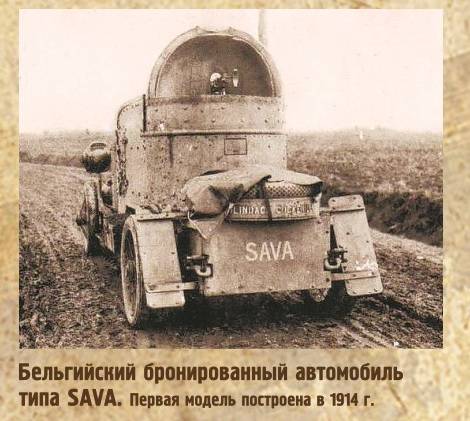 The armored car with the abbreviation SAVA replaced the obsolete armored car "Minerva". The new armored car was created on the basis of a sports car, which improved its driving performance. The car was reliably protected thanks to a completely enclosed body with a curved windshield, smoothly turning into the roof with a machine-gun turret of circular rotation, which became the "hallmark" of this armored car. The armored car division, which also included the new SAVA models, entered the replenishment of the Russian army’s armored forces in 1915, the “Car Cannon and Machine Gun Corps”, by personal order of the King of Belgium Albert, came to the aid of Russia during heavy fighting in Galicia. The expeditionary armored corps consisted of 375 personnel, 13 armored vehicles (6 cannon, 4 machine guns and 3 commander), 6 cars, 20 trucks, 18 motorcycles and 130 bicycles. After the division arrived, its review in Tsarskoye Selo was carried out by Emperor Nicholas II himself. 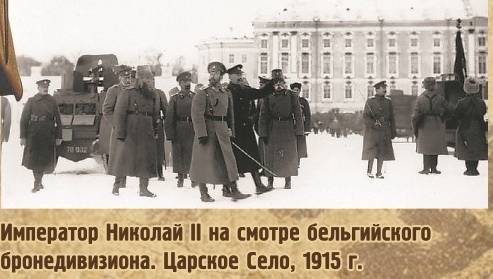 Results of participation in the war

The Great War swept a destructive rink around the Kingdom of Belgium. As we noted above, a significant part of the country's territory in 1914 - 1918. was occupied by Germany. During this time, 6000 civilians were killed, 25000 residential buildings were destroyed. About 1500000 Belgians (20% of the country's population) became refugees. The Kaiser forces committed many war crimes, carrying out the genocide of the Belgian people. The spheres of science and culture of Belgium suffered during the war. In particular, the largest library of the University of Leuven was burned. 300000 books disappeared in the fire, including many medieval books and manuscripts.

As a result of the war, Belgium received: Eupen, Malmedy and Moren, as well as a mandate for Rwanda and Urundi in German East Africa. The territory increased by 990 sq. km with a population of 65 thousand people. Belgium also got 8% of the total military indemnity.

One of the consequences of the First World War for Belgium was the rejection of the policy of neutrality and following in the foreign policy channel of France.

Author:
Oleinikov A., professor of the Mogilev branch of the Belarusian Institute of Law
Articles from this series:
The victory of the Entente is the victory of Russia. Who is to blame for the outbreak of World War I?