The murder of pupils of the Yeisk orphanage. Past Crime and Future Punishment 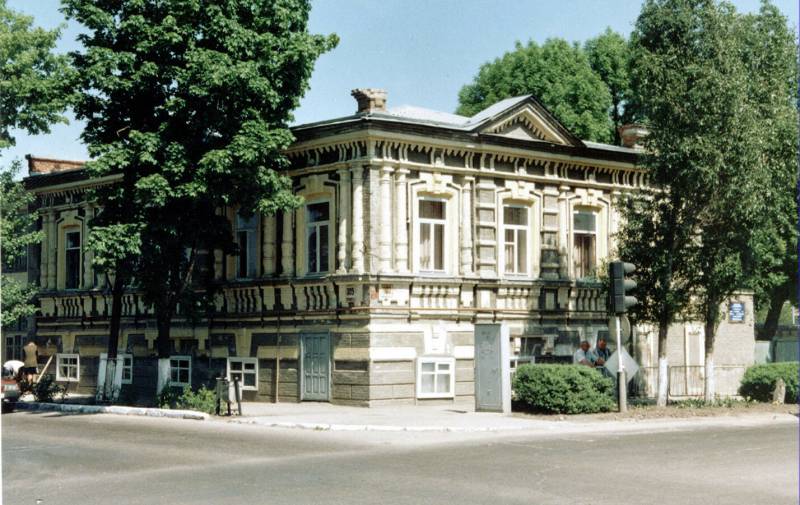 The Hitler regime and its minions committed many crimes in all occupied territories, but not all villains were punished. Identify and prosecute criminals still have to. In the near future, participants in the massacre of children from the orphanage in Yeysk, committed in 1942, may receive well-deserved punishment. Despite the past decades, the Investigative Committee of Russia decided to institute criminal proceedings.

In the summer and autumn of 1941, shortly before the arrival of the Nazi troops, the evacuation of industrial and socially significant objects was carried out in Simferopol. Together with other institutions, the orphanage left the city. About 300 students and staff were transferred to the city of Yeysk, Krasnodar Territory.

In August 1942, the Red Army was forced to leave Yeysk. Having occupied the city, the German invaders immediately began to destroy the Communists, Jews and other persons who were not allowed to live in the Third Reich. Soon, these events affected children from the evacuated orphanage.

On the evening of October 9, several covered trucks drove up to the buildings of the orphanage. The Sonderkommando began to force the children to load. Those who tried to escape were caught and thrown into cars. The occupiers gave different answers to questions about what was happening that were not related to reality. More than 160 inmates of the orphanage were put in trucks; there was not enough space for the rest. Then the cars left in an unknown direction. 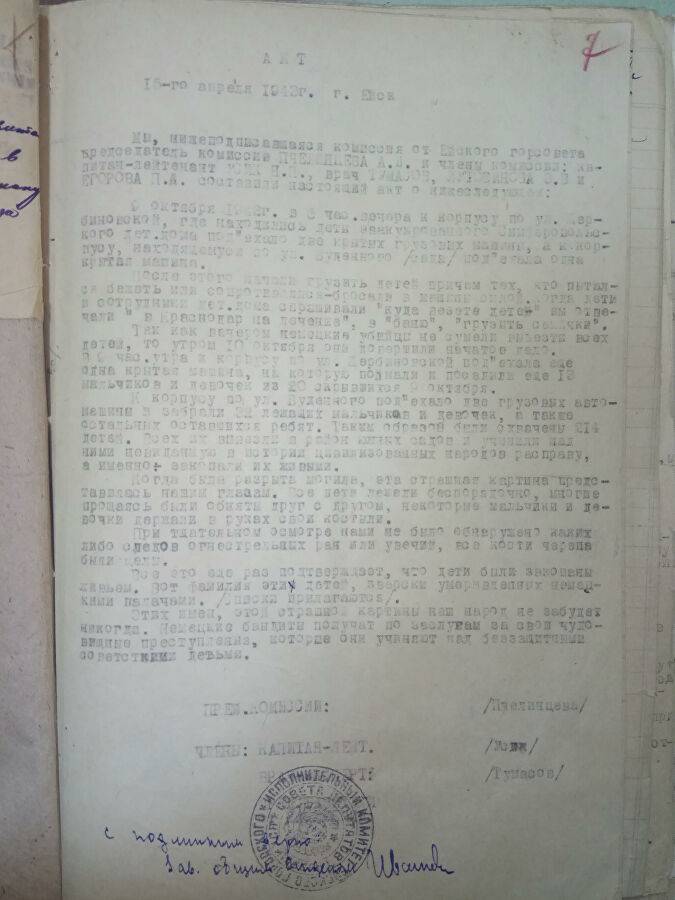 Act of April 15 with the first versions of events
The next morning, the Sonderkommando took and took a few dozen more children. In total, the invaders took 214 guys from 5 to 17 years old. Most of the children were disabled. On October 10, along with others, 22 bedridden patients were taken out. All these guys have not returned to the orphanage. According to some sources, only 10-12 pupils were able to save, but only one was reliably installed.

February 5 1943 Yeysk was freed from the invaders, after which an investigation of their atrocities began. Soon, two ditches with the remains of orphans were discovered outside the city. On April 15, the commission of the Yeisk City Council examined the burial sites and interviewed witnesses. The results of these activities have been documented.

The commission of the City Council established the course of events of 9-10 on October 1942 and put forward several versions. The bodies of the children were in two mass graves a few kilometers from the city. In one, whole bodies were found, in the other, both whole and fragments. There were no gunshot or other wounds on the bodies, the bones were intact. This fact, as well as the position of the bodies, led to the appearance of the version according to which in one of the graves the children were buried alive. In the light of other known data on the “activity” of the invaders, this version seemed plausible.

The investigation continued and led to new conclusions. In early August, the commission conducted a forensic examination of the discovered bodies and fragments. The state of biological material no longer made it possible to unambiguously determine the causes of death. However, the testimony allowed to complement the picture of events. According to the witness, the children did not cry when unloading cars at the burial place. Probably by this time they were already dead.

Based on the available data, the commission found that the 9 and 10 of October 1942 of the Sonderkommando took out and killed the children with the help of the so-called gazvagenov. Even in a short time from the orphanage to the ditches, the victims died of carbon monoxide poisoning. 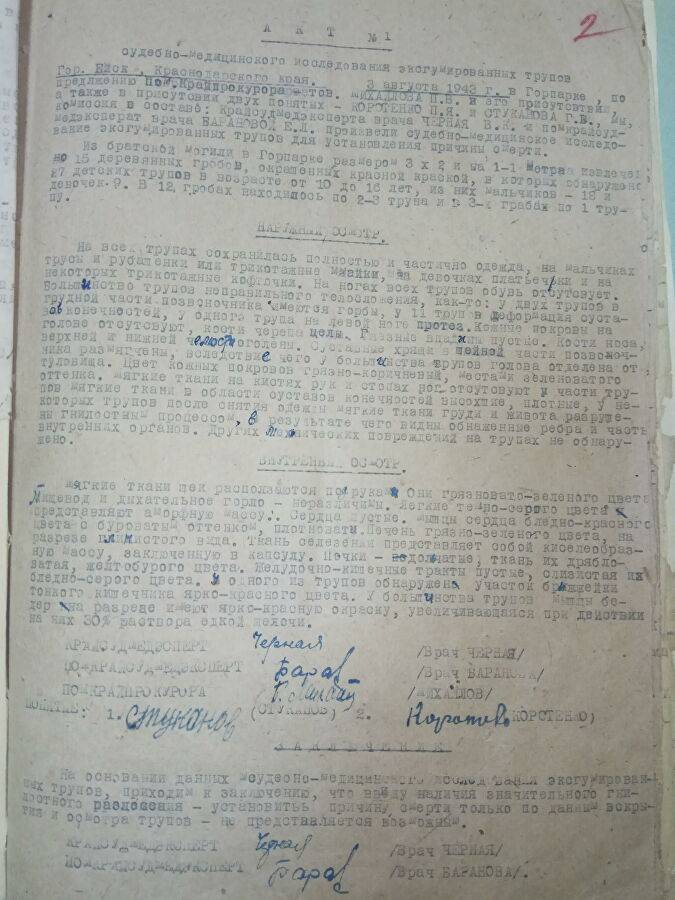 Act of August 4 with updated data
In addition to the course of events, the commission managed to restore the lists of inmates of the orphanage, as well as to identify the dead. Later, the remains of the dead orphans were transferred to the city cemetery. A monument has been erected.

Documents from the past

The tragedy of the Yeisk orphanage was well known before. But this year about this stories remembered again, and she is developing. On the eve of the next anniversary of the massacre, August 7, the FSB Directorate for the Krasnodar Territory and RIA News published the original investigation reports. The April and August documents were not even quoted before, but now they are available in full and in their original form.

New details from published documents supplement the already well-known picture. The atrocities of the invaders in the captured Yeysk are well studied, and now new details of both the crime and its investigation are becoming known.

9 October Yeisk Museum of History and Local Lore. Samsonova reacted to the publication of documents. Museum specialists intend to begin the search for relatives of orphans, evacuated from Simferopol and killed in Yeysk.

For several weeks, the Investigative Committee of the Russian Federation studied the newly published documents and on October 30 published important news. In the actions of the invaders found signs of a crime under Art. 357 of the Criminal Code of the Russian Federation (genocide). Such crimes have no statute of limitations, and therefore a criminal case has been instituted. 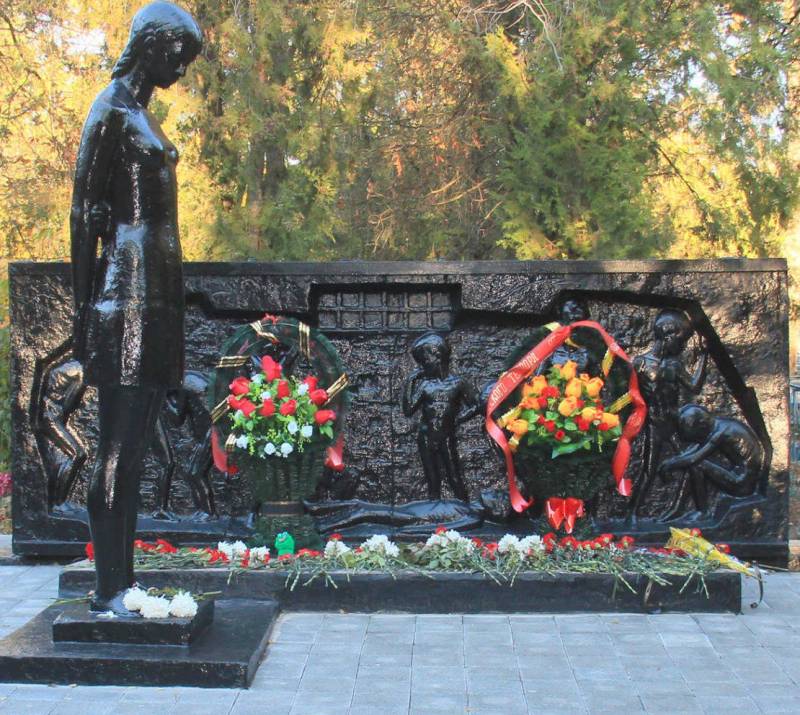 Monument to fallen orphans
It was established that during the occupation in the Krasnodar Territory the SS-10 “a” Sonderkommando led by Dr. Kurt Christman acted. This unit had at its disposal mobile gas chambers - gas vagenes. It was the SS-10 "a" team, with the assistance of the commandant of the city of Kandler, the head of the Gestapo of the city of Bededecker and the doctor Gestapo Strauch who carried out the massacre of 9-10 on October 1942.

The Investigative Committee recalled that K. Christman and other members of the Sonderkommando have already received well-deserved punishment for their crimes. However, other participants in punitive operations and atrocities against civilians evaded responsibility. Thus, the purpose of the criminal case is to identify other participants in the massacre of the orphans and their fair punishment.

Unfortunately, almost eight decades have passed, and all this time the criminals remained at large. In addition, many of them could die, without waiting for the proper punishment. However, as Sledkom rightly notes, such terrible crimes should not go unpunished, regardless of the past tense.

The inevitability of punishment

During the Great Patriotic War, the Nazis committed a great many crimes against humanity in the occupied territories. New documents and certificates of various events regularly appear. In addition, previously unknown criminals who have to answer for their actions are regularly identified.

Unfortunately, the bulk of the perpetrators of the tragedy of Yeysk could have evaded responsibility. The situation at the front did not allow timely identification of the criminals and bring them to trial. However, this omission will now be corrected. The Investigative Committee has opened a new criminal case and will now search for those involved and guilty.

Whether it will be possible to find the culprits and put them on trial is unclear. Too much time has passed, and many Nazi criminals are simply no longer alive. However, crimes against humanity have no statute of limitations, and the perpetrators must be found.