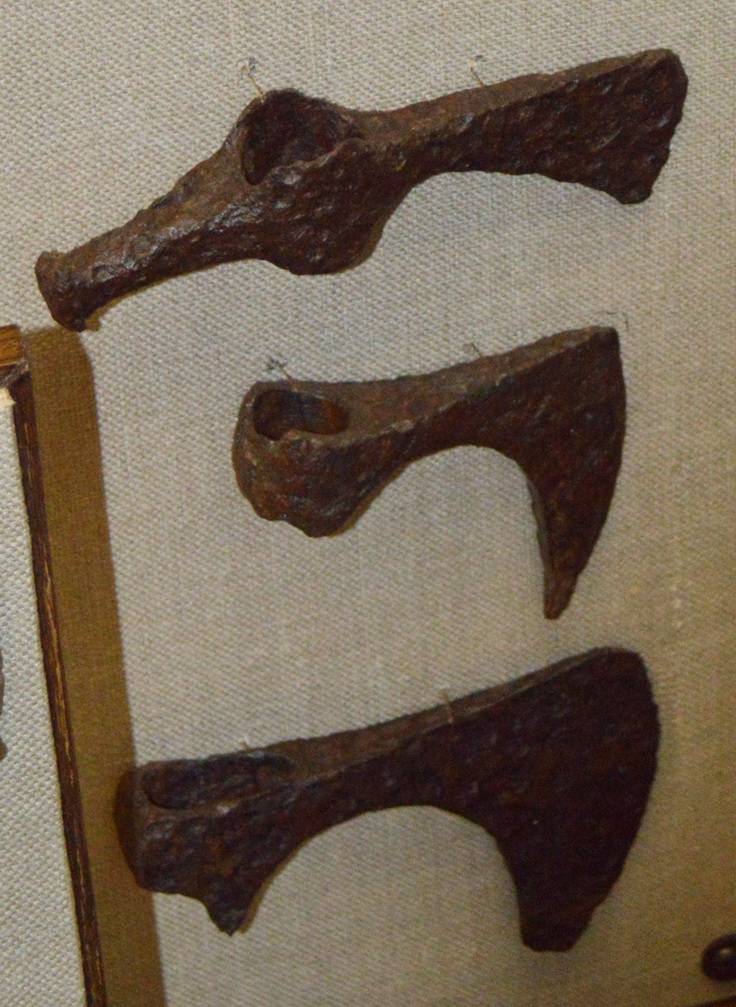 Old Russian axes from the collection of the State Historical Museum. At the top is a typical coinage. Axes axes beneath him. Wikimedia Commons Photos

Old Russian warrior could use cold weapon different types. One of the main weapons was a battle ax. Such a product could be useful on the battlefield and in the campaign, which contributed to its wide distribution and long-term maintenance in the ranks. In addition, for many centuries, battle axes have constantly evolved, giving advantages over the enemy.

To date, several thousand axes of various kinds and types have been discovered in the territories of Ancient Russia. At the same time, archaeologists did not always find battle axes used by warriors. Products similar in design could be used in the national economy or in the troops to solve supply problems. As a result, it was necessary to create a classification of axes, taking into account the universality of such products.

First of all, battle axes of all varieties and types stand out. In size, they basically did not differ from other axes, but had a smaller blade and were lighter - no more than 450-500. They were intended for battles, but could also be used for household purposes, although in this respect they did not differ in special convenience. 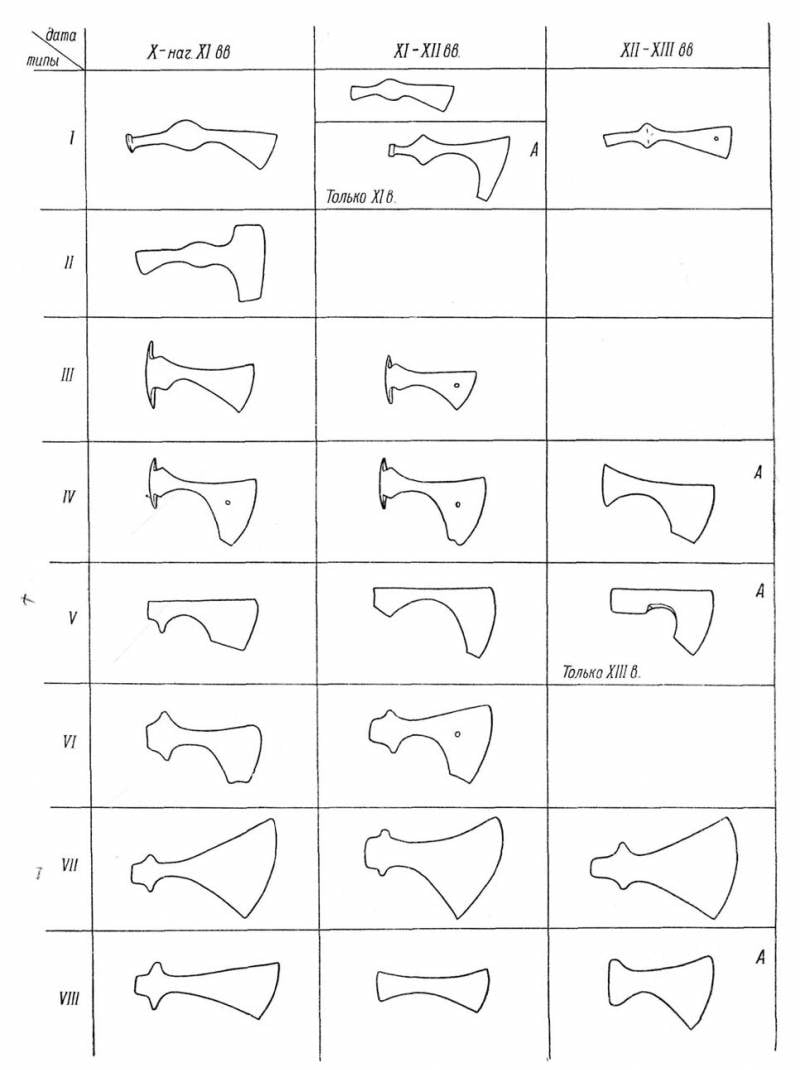 Classification of forms of battle axes from the "Old Russian weapons" A.N. Kirpichnikova
Some battle axes looked like status and ceremonial weapons. Such hatchets were small in size, mostly they were versions of compact coinage. They had a rich finish corresponding to the status of the owner.

The third main class is work axes. These were larger and heavier samples, designed to perform various works. In some situations, working axes were used in battle, but they lost noticeably to specialized models in terms of convenience.

Over several centuries of development, axes have repeatedly changed shape, and this also applies to combat and working models. Only for weapons X-XIII centuries. It is customary to distinguish eight different types of blades. They differ in the shape and size of the working part, the presence or absence of a protruding butt, etc.

The first mentions of Slavic warriors with axes date back to the 8th century, but archaeological data for that period are extremely scarce. A noticeable number of finds dates back to the 9th and 10th centuries. This was facilitated by the development of Old Russian rati, the need for mass weapons for infantry, as well as an active search for new designs and other factors. 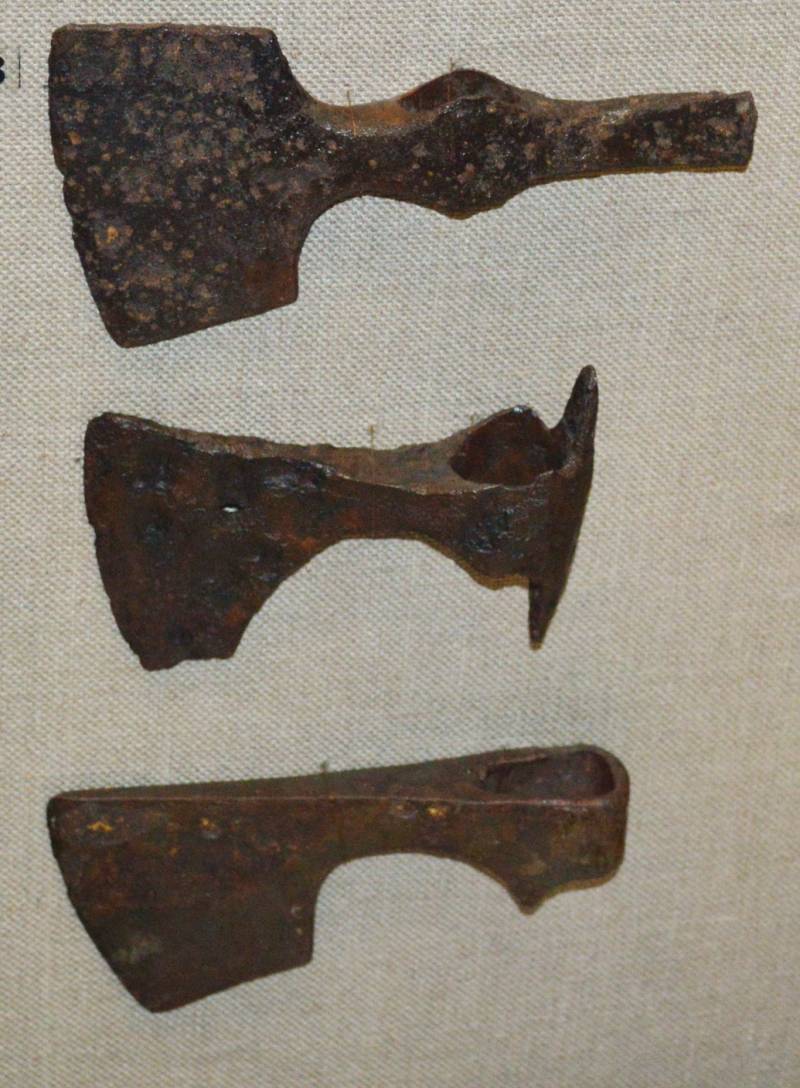 Axes from GIM. Above is a broad-bladed coinage. In the middle - a mint with a reduced butt. Wikimedia Commons Photos
All known battle axes had a total length of not more than 750-800 mm. The blade length rarely exceeded 150-170 mm, and the mass was usually within the 400-500 g. A weapon of this configuration was quite convenient to carry and use - especially in combat. Some of the axes had a hole in the wide part of the blade, which at one time became the subject of controversy. It was found that a lace was threaded through the hole to secure the protective cover.

The ax itself was forged from iron or steel - depending on the capabilities of the blacksmith. A suitable tree walked on the ax, a simple and affordable material.

Probably, combat axes (type I in the table of A.N. Kirpichnikov) were borrowed from the nomads. Such weapons had a narrow and long blade, and also received a hammer-shaped butt. A strike with a mint could be carried out both with a blade and with a butt, which ensured effective transfer of energy to the target. In addition, the ax was distinguished by a good balance, which improved the accuracy of the blow. 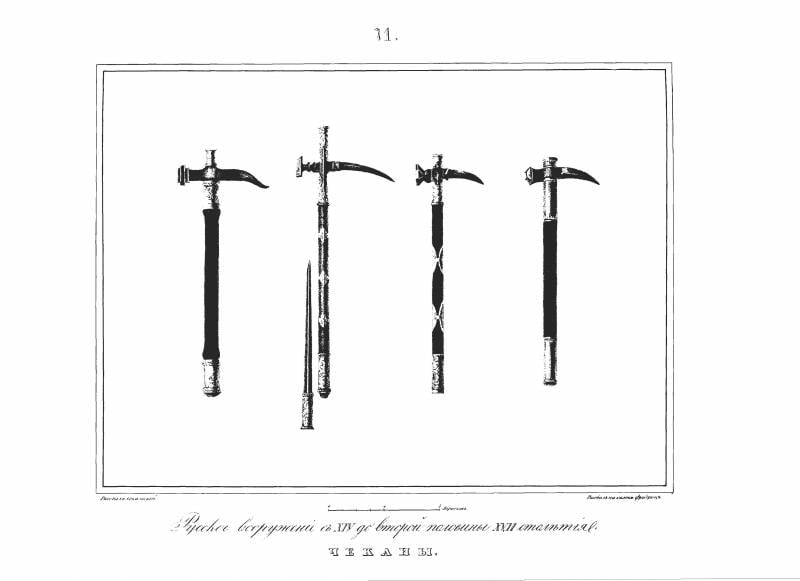 Different designs of coinage. Figure from the book of A.V. Viskovatova "Historical description of clothing and weapons of the Russian troops "
The hammer-shaped butt could be used with a blade of various shapes, from narrow elongated to beard-shaped. There were also shorted shafts with a larger area designed for strikes.

The Scandinavian influence explains the appearance in Russia of ax-axes with a straightened upper edge and a rounded narrow blade drawn down (type V). This design of the blade made it possible to combine cutting with cutting. There were similar axes with a concave upper edge and a different butt (type IV).

So the so-called “from the Varangians” broad-blade poleaxes (type VII) - axes with a blade of a triangular or close shape, symmetrical or with slight asymmetry. It is curious that such samples could be equipped with a longer hatchet. The total length of such a battle ax, unlike other varieties, reached 1 m.

Modern reconstruction of the old Russian ax. Wikimedia Commons Photos
It is curious that only axes-minting were purely military weapons, poorly adapted to other tasks. The specific configuration of the blade and the butt made it difficult to cut firewood or other work. All other types of battle axes and axes had economic "brothers." Typically, working axes, while maintaining the contours of the parts, differed from the combat dimensions and weight.

Combat and working axes of all known types were distributed throughout Ancient Russia and were actively used by squads. Moreover, in different periods and in different regions, these or those designs prevailed. Thus, mintings were more common in the South, near the places of their original appearance, and axes of the Scandinavian type were found in the northern regions. However, nothing prevented the interpenetration of weapons culture and the use of other people's experience.

The battle ax, regardless of its type, was simpler and cheaper to manufacture than a sword, although it was inferior in this respect with a spear. As a result, already in the IX-X centuries. axes of various types are becoming one of rati's main weapons. At the same time, unlike other weapons, the ax was used only in infantry. Soldiers usually used special battle axes, and the militia often had to take workers. 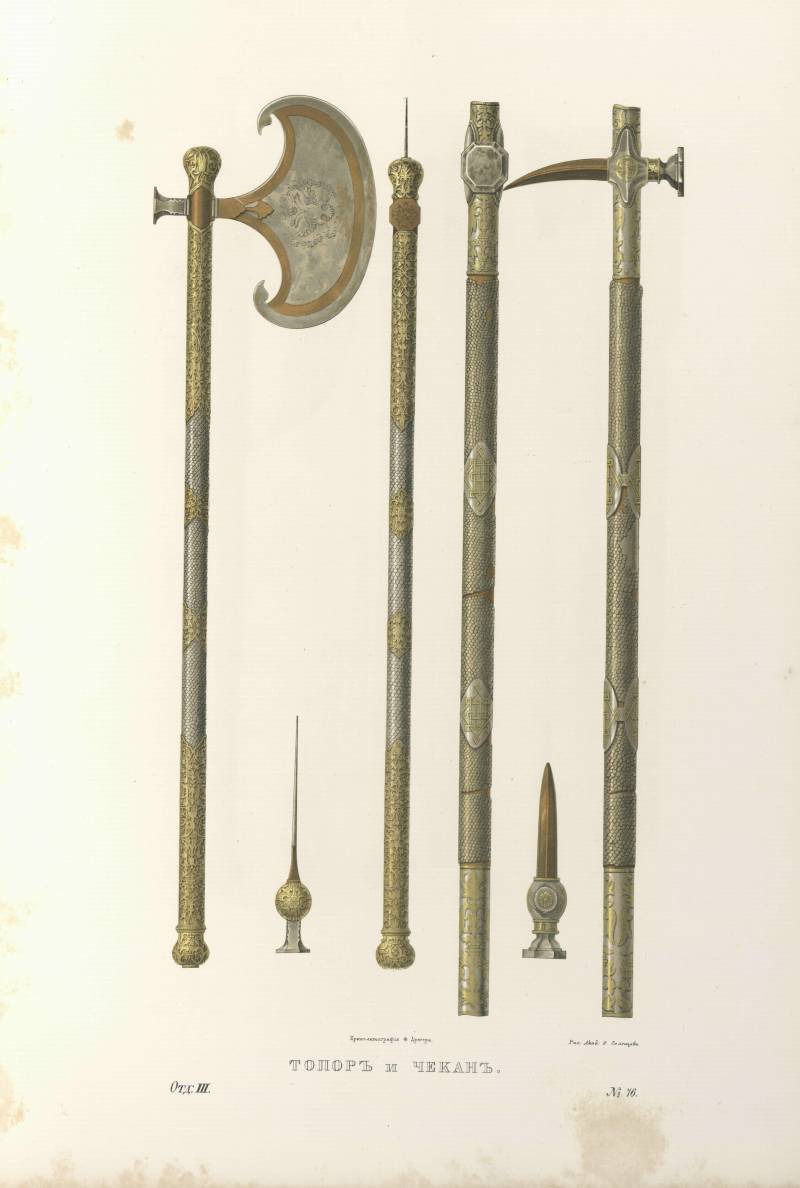 Russian axes. Drawing from the book "Antiquities of the Russian state, published by the highest command"
In battle, the ax was useful due to its accuracy and impact power. In addition, he allowed to fight with the defense of the enemy. A successful strike was able to split a wooden shield, and chain mail or soft armor could not protect the warrior from fragmentation.

The battle ax maintained its position until the 12th century, when the situation began to change. In archaeological complexes dating from the 12th-13th centuries, axes are found in significant numbers, but with many spears, swords, etc. If possible, the warriors replaced the ax with a more convenient weapon with a long blade, while the militias kept it.

Despite the reduction in their role, battle axes remained in service. In addition, their development continued. The evolution of such weapons was associated with ax-axes of all versions. The shapes and configurations of the blade and the butt changed, the handle was finalized. Subsequently, these processes led to the appearance of a wide moon-shaped blade, on the basis of which the berdysh was created. Its final appearance was determined in the 15th century, and with these or those changes, such weapons lasted several centuries. 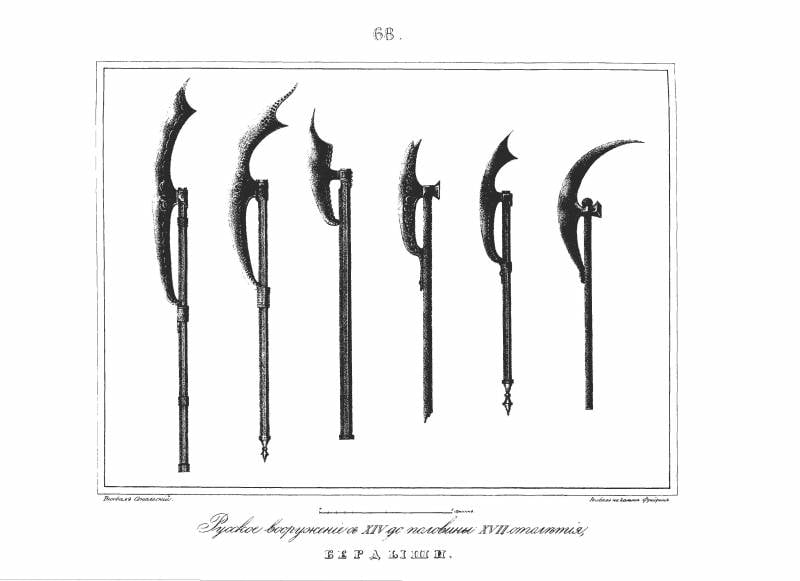 Berdysh of different configurations. Figure from the book of A.V. Viskovatova "Historical description of clothing and weapons of the Russian troops"
In parallel with battle axes in the troops, similar samples of economic purpose were used. With their help, the construction of various structures, the organization of engineering barriers, etc. It is noteworthy that in the role of a working tool the ax remains in our army until now, although its combat varieties have long gone down in history.

The first battle axes among the Slavs appeared almost in the middle of the first millennium AD, and in the future such weapons became the most important attribute of an Old Russian warrior. For several centuries, battle axes of various types were used together with other infantry weapons.

However, the further development of rati, the growing importance of cavalry and new threats to the infantry led to the rearmament and change in the nomenclature of the main infantry equipment. The role of battle axes was reduced, part of their tasks were now solved with the help of swords and sabers. However, the development of axes did not stop and led to the emergence of new types of cold pole arms.

In the future, these samples were withdrawn from service due to final obsolescence. Despite all this, working axes have not gone away. They remained in the army and the national economy and did their work. The versatility and the ability to perform various tasks was useful - and leaving the battlefield, the axes were not left without work.