Chinese fighters with AFAR will displace Russian aircraft on the market? 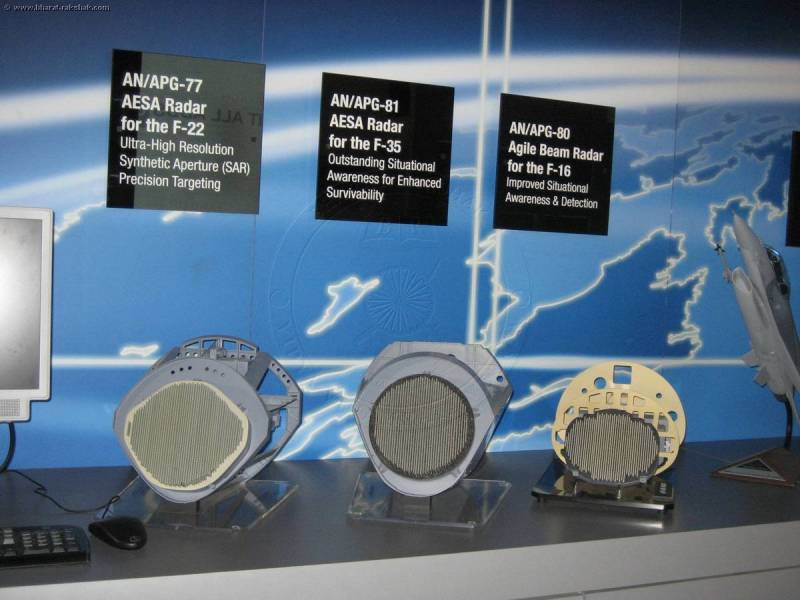 In November 2019, Defense Aerospace reported that for the Chinese fighter J-11B (nothing more than a copy of the Su-27SC) have created new airborne radar station with active phased array antenna (AFAR). This is more than interesting, given the large fleet of these machines. However, it is even more interesting to look at the situation as a whole.

What is a radar with AFAR? If you do not go into details - the most technologically advanced radar station for fighters today. It is used for the most advanced fighters of the fourth generation, as well as for fighters of the last, fifth, generation. So the F-22 Raptor has an AN / APG-77 radar with an active phased array, and the F-35 has AN / APG-81. What exactly is the advantage of such a concept? If you do not go into details, the radar with AFAR allows you to detect targets faster, at a much greater distance and at the same time has outstanding reliability.

AFAR operates on the principle of controlling the phases of the signals: the system is based on transceiver modules or MRP (F-22 has about two thousand of them). Changing the phases of the signals emitted by the transceiver modules gives the radar with AFAR the ability to form a powerful directional beam, allowing you to solve problems much more efficiently than the old pulse-Doppler radar stations. Otherwise, a radar with a VFAR or a passive phased antenna array works - the forerunner of a radar with a AFAR. VFAR does not have active devices: to generate a radio signal, a single radio transmitter is used for the entire system, after which it is distributed among all radiating elements.

With some similarities between the radar concepts and the AFAR, it’s more reliable (failure of one anti-aircraft radar will not be a big problem), easier and more universal. “Previously, if, for example, the transmitter failed, the plane would become blind. And here one or two cells are affected, even a dozen, and the remaining thousands continue to work, ”says the Director General of NIIP them. Tikhomirova Yuri Bely. As for universality, the radar with AFAR, unlike others, allows you to simultaneously search for and detect targets, perform cartography, and even interfere with a potential enemy. Redirecting part of the modules to solve specific problems.

The disadvantages of active phased antenna arrays are their high price, but you need to understand that modern military technologies (and not only modern ones) usually cost more than representatives of previous generations. Especially at the stage of their early use.

The battle for air and for the market

For Russia, the introduction of radar with AFAR into its fighter planes will be truly an innovation, no matter how strange it sounds. The country has not yet physically adopted a single serial fighter possessing such technologies. The Su-35С and Su-30СМ aircraft delivered to the troops have radars with PFAR: Irbis and Bars, respectively. And the MiG-35 and Su-57 (both must have radar with AFAR) are still only prototypes, although the first production Su-57 should be delivered to the VKS this year. Recently it was even shown. 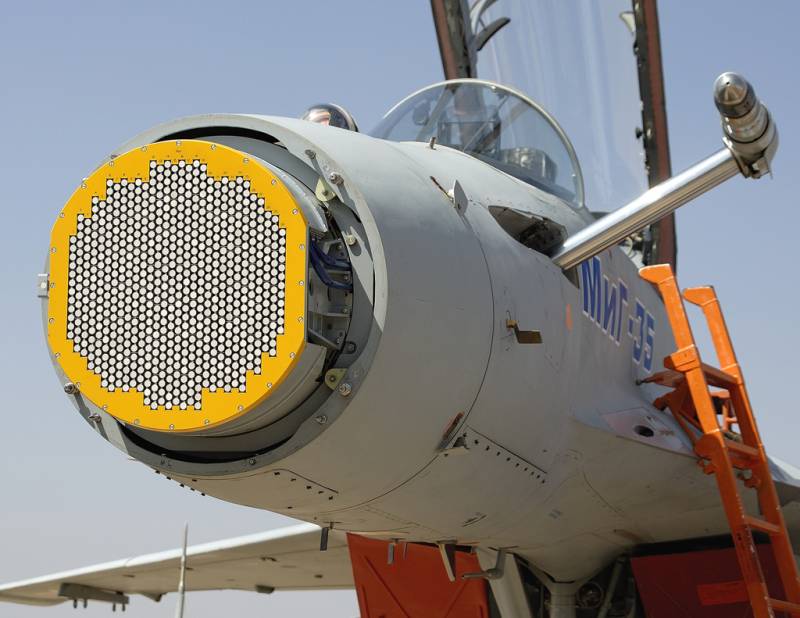 But what about China? The J-11Bs mentioned above originally had the old Type 1474 radars: according to experts, this is nothing but the Chinese version of the old Soviet radar H011. As it became known now, tests of the advanced J-11B fighter with a new radar are carried out in a desert area and quite successfully. In the future, a new radar with AFAR will allow to equip Chinese J-11B fighters with new aviation missiles PL-15. “Unlike the black radar cones (domes) typical of our J-11B fighters in the front of the aircraft, the new radars are installed under the white cone (dome). The new radars allow the use of long-range missiles, ”the Chinese television channel CCTV said. 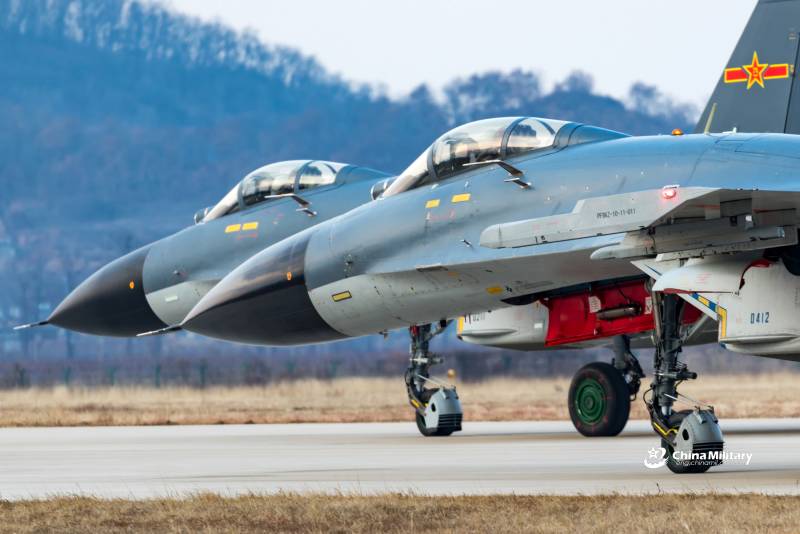 Recall that the PL-15 is a new long-range missile with an active homing radar, which has already managed to arouse great interest in the West.

In total, according to data from open sources, China has at its disposal 95 J-11 fighters and 110 J-11B / BS. However, soon all these machines could be replaced by another aircraft - purely Chinese (with some reservations). The fact is that now China has about 300 J-10 fighters in its composition. About 50 fighters from this number belong to the J-10B version and have radar with AFAR, a "subtle" air intake, a modern front-view optical station and the new WS-10A engine. In the 2018 year, it became known that the new J-10C fighter, which, among other things, has improved stealth, entered the arsenal of China. 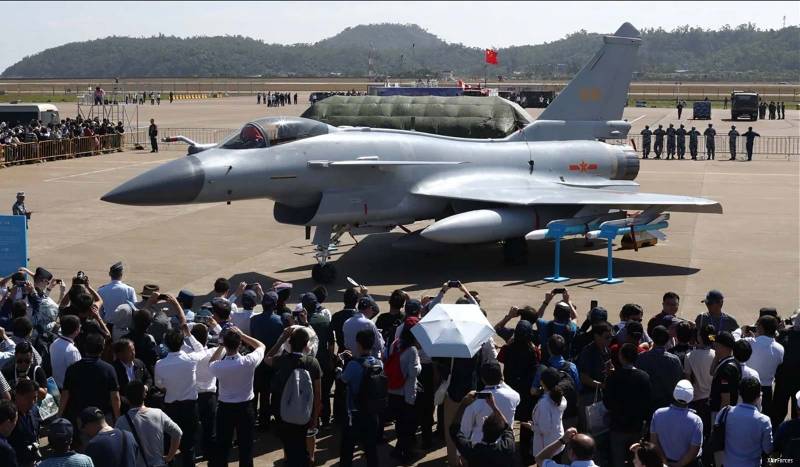 You can, of course, laugh at the Chinese, saying that the J-10 is a "copy" of the Israeli "Lavi" or something else. However, you need to understand that now the latest versions of the “Chinese” surpass the most advanced serial Russian fighters in terms of avionics (flight performance is a completely different issue, we will not consider it now).

It is also noteworthy that the Chinese aircraft is relatively cheap: at least in the early configuration. According to data from open sources, the price of one J-10 varies from 30 to 40 million dollars. Even if we raise the bar to 60 millions, it will be significantly lower than the export value of Su-35С. Recall that in the 2018 year, Rossiyskaya Gazeta, the official press organ of the Russian government, citing the Chinese publication Phoenix reported that the details of the contract for the supply of Su-35 to China were officially announced at the Economic Forum in St. Petersburg. Its total price is 2,5 billion dollars. If you recalculate the cost of one car, it turns out 104 million dollars per plane.

This is not surprising when you consider that previously the price of the Su-30MKI of the Indian assembly is approximately 80 million dollars. That is, roughly speaking, it was at the F-35A price level at the time of the deployment of the serial production of this combat aircraft. If you try to supply the Su-30 / 35 with a hypothetical Russian radar with an active phased array, their price will increase even more. Such an "amusing" arithmetic.

From a formal point of view, the new Russian Su-57 and the new Chinese J-20, also related to the fifth generation, have radars of the same level. The radar with the AFAR Н036 Squirrel, which has approximately 1500 PPM, should become a Russian car. It must be assumed that the J-20 radar has similar characteristics. 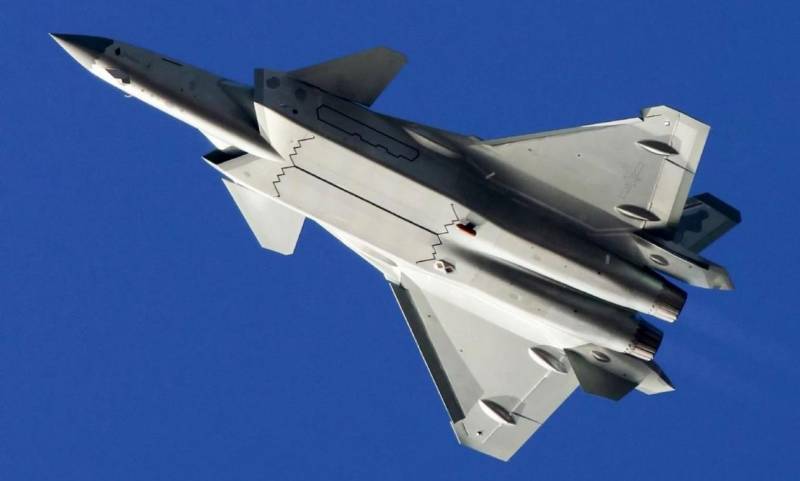 However, you need to understand that the J-20 has already been adopted, and in the future the pace of production of this aircraft will only grow. In this regard, the main intrigue remains the combat capabilities and the price of the car: it is now very difficult to judge both one and the other due to lack of data. But if the Chinese succeed at least halfway, the Su-57 runs the risk of getting a very dangerous enemy in the global arms market.

We are in Yandex Zen
An-12 in Afghanistan
MiG-21 in Afghanistan
44 comments
Information
Dear reader, to leave comments on the publication, you must to register.