A bad omen for the Su-35C. What is the danger of re-equipping Typhoons with E-Scan Mk1 / 2 radars? 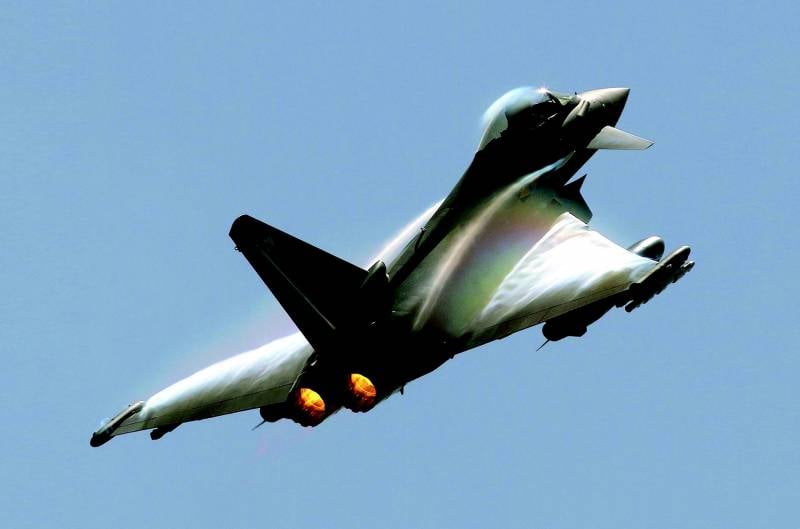 Despite the fact that the information published in the Spanish military-analytical publication infodefensa.com on the upcoming large-scale update of the on-board radar systems of the Typhoon multi-functional fighters of the Tranche 1 / 2 / 3 Luftwaffe and the Spanish Air Force received close attention only from Western European experts the technological features of this modernization program should be thoroughly analyzed by specialists of both the Russian defense department and the leading aircraft manufacturer a holding company, Sukhoi Company PJSC. The need to make this event more widely publicized in Russian expert communities is not delayed and is dictated by a number of compelling justifications of a technological and operational-tactical nature.


Based on the data voiced by the head of the military-industrial unit of Airbus Defense & Space, Kurt Rossner during a recent conference in German Manching, as well as on earlier information about the optional update of the Typhoon avionics featured in the West European media space from 2014 of the year, you can come to the conclusion that 110 German and 19 Spanish EF-2000 will be re-equipped with promising jamming-proof airborne radars with active E-Scan Mk 1 headlamps, while the "Typhoons" of the British Royal Air Force will receive even more advanced odifikatsiyu E-Scan Mk 2, referred to in the British press as the «Radar 2 configuration».

Both modifications of the on-board radar E-Scan are the brainchild of the transnational military-industrial corporation Leonardo and are being developed as part of the ambitious project Captor-E, designed to bring the combat potential of the Typhoon fleet of all trenches to the 4 ++ generation level as in the tasks gaining dominance in the air in a difficult jamming environment and long-range interception, and in the tasks of striking at surface targets and suppressing enemy air defense.

It is well known that almost all EF-2000 Typhoon combat armaments, which are in service with the air forces of Great Britain, Germany, Italy and Austria, are still equipped with obsolete airborne radars with slot antenna arrays ECR-90 Captor-M. In terms of noise immunity, resolution, range, throughput (the number of targets simultaneously accompanied by “on the go”) and target channel, Captor-M radars are significantly inferior to not only the most advanced multi-element AFAR radars AN / APG-77 / 79 / 81, installed on the F-22A Raptor, FF 35A Lightning II multi-functional fighters, but also the domestic airborne radar with passive PAR Bars-R fighter Su-30SM, Irbis-E fighter Su-fighters 35С and “Barrier-AM” MiG-31БМ interceptors. In particular, the target capture range with an effective reflective surface of 1 sq. m using the Captor-M radar is not more than 90 — 95 km (in a simple jamming environment), while Bars and Irbis-E radars are capable of “capturing” airborne objects with a similar radar signature at a distance of 110 and 270 km, respectively, and in a much more complex jamming environment.

As a result, even the integration into the Typhoon ammunition of promising direct-flow ultra-long-range air-launched missiles MBDA Meteor with active radar seeker does not guarantee the crews of these airborne assurance vehicles in hypothetical long-range aerial combat with our Su-30СМ and Su-35С . The most acute problem with the “ancient” Captor-M radars will be felt in case of an attempt to penetrate the EF-2000 Typhoon units into the powerful air defense zones of the Russian Air Force A2 / AD and the military air defense in the East European theater of operations (in the areas of the Republic of Crimea and Kaliningrad region).

The mechanical drive of the antenna sheet dovor and the EW operation once again confirm the superiority of AFAR technology. Another "stone in the garden" of domestic radars with passive headlights

Re-equipment of Typhoons fleets with the latest Leonard E-Scan Mk 1 / 2 (Captor-E) radar systems not only literally eliminates the entire spectrum of the above problems overnight, but also allows Typhoons weapons control systems to implement a number of additional unique modes work. In addition to the highest noise immunity due to the presence of an individual low-noise microwave transistor / amplifier and attenuator / attenuator in the architecture of each AFAR transceiver module (provide the formation of a flexible radiation pattern with “dips” in the direction of the enemy’s EW stations), both versions of the Captor-E radar will be equipped with a mechanical drive for the antenna headlamp of the active headlamp.

This design solution is a rare and partly unique “trick” in relation to the basic technology of active phased antenna arrays, which provides for mounting the web on a fixed hardware module with an inclined support side. Thanks to this solution, the Captor-E azimuth sector of the survey is not standard 120 ° (raptor radar AN / AG-77), but more than 200 ° with a partial coverage of the rear hemisphere, which will allow Typhoon pilots to maintain a rocket- and aircraft-hazardous direction in the radar scanning zone without the need for rapprochement with the most dangerous section of airspace (the lines of action of air combat missiles or missiles of a potential enemy). Moreover, the extension of the antenna sheet allows the E-Scan Mk 1 / 2 radars (unlike the fixed AN / APG-77 and AN / APG-81) to maintain the proper energy potential of the scanning beam when tracking targets located at angles greater than 30 — 45 ° from the longitudinal axis of the fighter (in the side hemispheres).

As for the Captor-E airborne radar of the E-Scan Mk 2 / Radar 2 configuration modification (for the British Typhoons), then certain arrays of its transmitting and transmitting modules (several hundred) are likely to be synchronized with specialized radio frequency tunable RFTF filters (Radio Frequency Tunable Filters), providing a wide frequency range of work on radiation. This solution will allow the E-Scan Mk 2 AFAR radar to implement the EW mode, which emits a narrow “interfering beam” of high spectral density in the direction of radar reconnaissance and active / semi-active radar seeker of the enemy. The American AN / APG-79 / 81 airborne radars of the Super Hornet and Lightning families have a similar operating mode.

Ctrl Enter
Noticed oshЫbku Highlight text and press. Ctrl + Enter
We are
Situational analysis of the death of the MH17 flight (Malaysian Boeing 777), made on the basis of engineering analysis from 15.08.2014Results of the week. “In our cooperative, the board is always agreed”
41 comment
Information
Dear reader, to leave comments on the publication, you must to register.