Mysteries of the hararach sword 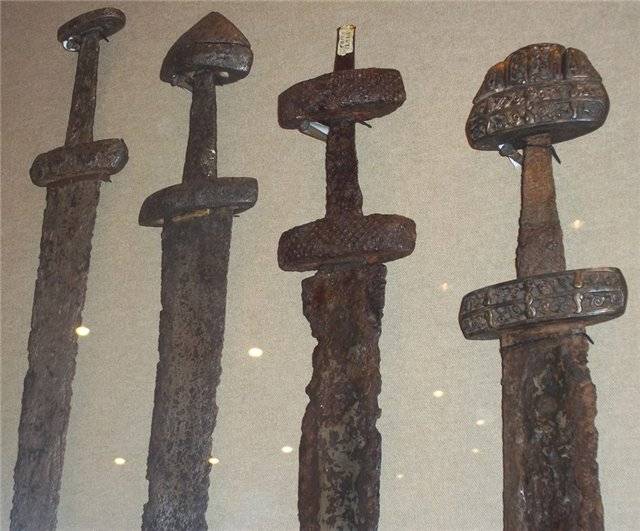 Old Russian swords from Gnezdovo. Whether there were harazhuzhny among them is unknown. Photo Mihalchuk-1974.livejournal.com

One of the main weapons of the Old Russian warrior was a sword. History sword in Russia is quite well known, but white spots still remain in it. For example, the so-called cause for controversy is still the so-called haraluzhny sword. Which one arms this name belonged - it is unclear. It is also unknown why this sword was distinguished from other blades. All this contributes to the emergence of various versions, none of which have yet been fully confirmed.

The phrase "swords of haralyuzhny" first appears in the "Word of Igor's Regiment", written at the end of the XII century. Prior to this, similar expressions are not found in well-known sources. In the "Word" the adjective "haraluzhny" is used several times as a description of swords, a copy and flails. It is also necessary to pay attention to the turnover “Vayu is the brave of heart.”

The next time, haraluzhny spears are mentioned only in Zadonshchina, written approximately in the XIV-XV centuries. In other literary works of that era, haraluzhnye swords, spears, etc. or haralug itself are absent.

The next significant mention of haralug is found in V.I. Dahl. The term is associated with flowery steel, damask steel. However, the dictionary was compiled several centuries after the first mention of haralyzhennyh weapons, which imposed certain restrictions.

Origin of the name

Studying the "Word of Igor’s Regiment" and ancient Russian weapons, philologists and historians proposed several versions regarding the "haraluzhny swords." None of them has yet been fully confirmed, and the debate continues.

There is a version according to which the term "haralug" comes from the Old High German word "Karoling". Accordingly, it can indicate a weapon of a foreign standard - a Carolingian type sword. However, this option did not enjoy much support, and then received a logical refutation. 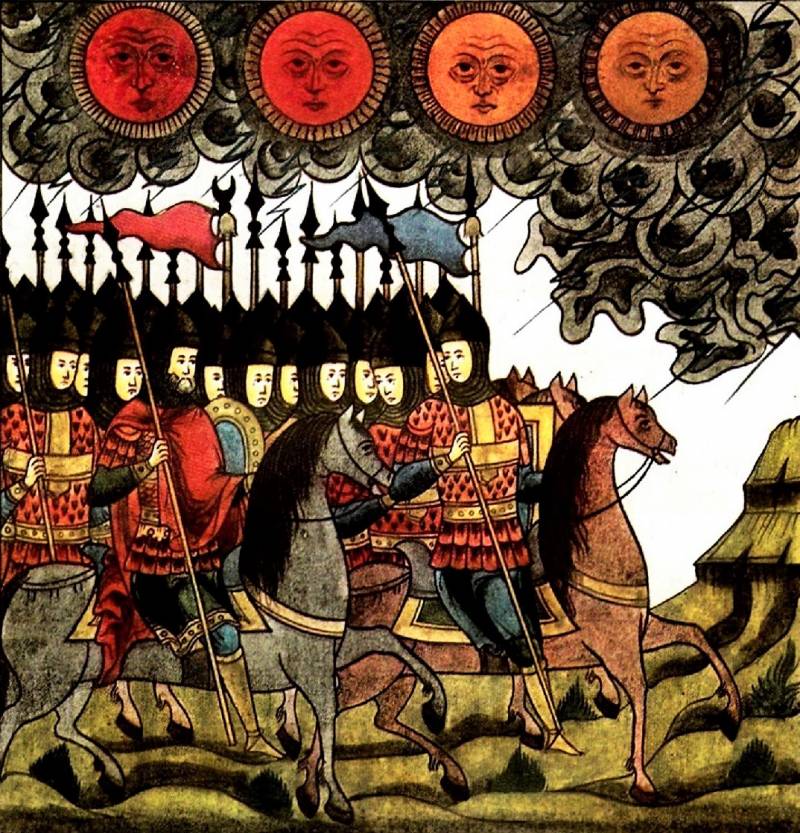 Old Russian army. Illustration I.G. Blinova to the "Word of Igor's Regiment", ed. 1912
There is an explanation linking the "haralug" with the Turkic peoples and their weapons. Moreover, as far as is known, in most Turkic languages ​​such a word was absent. One version of the “eastern wake” suggests linking the swords of warriors with the Central Asian tribal union of the Karluks, who have mastered the production of blades well.

However, searches in the East can be useless. Until a certain time, ancient Russian blacksmiths borrowed ideas and solutions from their Western colleagues, as a result of which their swords and spears were similar to European ones. The experience of the eastern neighbors began to be used later - after writing the "Words on Igor's Regiment". In the work of A.N. Kirpichnikov's "Old Russian weapons" offers a fairly balanced and logical version that explains this confusion. The definition of “haraluzhny” could indeed be taken in the East, but it was used only for local or western weapons.

The main points of view on the problem of “haraluzhny swords” suggest that in this case we are talking about material or weapons manufacturing technology. However, there are other versions. In particular, it is proposed to link the “haralug” and the process of tinning or performing another coating. This version allows us to explain the heart chained in the haralug from the Word and the birch of haraluzhny from Zadonshchina.

However, the version of the coating has no worthy evidence and is not very popular. The generally accepted explanations relate specifically to the material of swords and spears.

There are several versions of the translation of the Word and Zadonshchina into the modern Russian language, and they also cause confusion. In some of these translations, other definitions are used instead of the old Russian term “haraluzhny”. In particular, damask is often mentioned.

It is the version of the Kharaulug as damask that was included in V.I. Dahl. According to domestic and foreign sources, in Ancient Russia they were well acquainted with this material. There was a fairly large number of damask blades of foreign production - although due to the high cost such weapons were not available to all warriors. 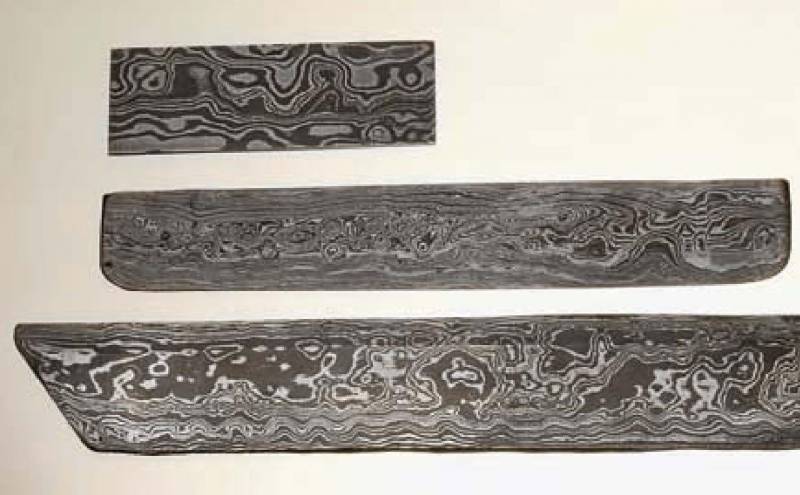 The results of experiments on the restoration of the Khorolug, 1998, Photo by Kalashnikov.ru
There is information about the purchase of imported materials for the further manufacture of swords by local blacksmiths. However, its own production of damask for many centuries could not be launched.

The version of the haralug-damask has the right to life, but still not without flaws. Her main problem is the lack of direct evidence. In accessible sources related to the required historical period, damask and haralug are not mentioned and identified together.

In the “Word of Igor’s Regiment” with swords, haraluzhny spears and flails are mentioned, which raises new questions in the context of the damask. Historically, a spear was a simple, cheap, and massive weapon for a foot warrior or horseman. Damask tip leveled all these advantages. The situation is similar with flail. Moreover, this should be taken into account that this subject of agricultural implements has traditionally been made of wood with a minimum number of metal parts.

Thus, the version of haralug-damask has several significant drawbacks and does not look very believable. This can be explained by the fact that many centuries have passed from the appearance of haraluzhny weapons to the formation of the “damask” version, and during this time no one has bothered to preserve knowledge about metals and weapons.

It is possible that the term “haralug” was used to refer to a certain alloy that has become obsolete and forgotten. In this case, one could conduct research and try to recover the lost technology. This is precisely what a group of Russian scientists and metallurgists took up in the mid-nineties.

A knife made of a modern horolug. Photo by Kalashnikov.ru
It all started with the recently discovered Scandinavian annals, which mentioned the Slavic axes of extreme strength. Such weapons literally chopped down the swords of the enemy. According to legend, such a weapon was granted to the god God Khors. In this regard, a version appeared about the origin of the name “haralug” from “Khorolud” - “Glitter of Horse”.

In further studies, the ancient Novgorod process of manufacturing steel for the blade was restored. When melting loose lake ore using birch coal, a small amount of iron meteorite material with a small nickel content was added. The latter provided alloying of steel, and due to meteorite iron a complex austenite-martensitic microfiber structure was formed. This structure gave a high dynamic viscosity and high hardness of the blade.

By the beginning of the 2000s, the study participants launched the production of new steel-holorug and began to produce knives of different types. A characteristic feature of these products was a small pattern on a blade resembling damask steel. In addition, the knives were distinguished by spectacular artistic decoration.

The mystery is not revealed.

Despite all the efforts of historians and metallurgists, accurate information about the haralug is still lacking. What it is, how it was made, and what the differences were, is unclear. Available information in literary sources is extremely scarce, and the necessary archaeological finds are still missing. As a result, haraluzhnye swords and spears are still one of the main mysteries of their era.

Whether there will ever be clear and unambiguous answers to existing questions is unknown. Historians and archaeologists have to rely only on available sources and artifacts, the amount of which is not always sufficient to identify all the required information. Perhaps the mysteries of the haralug will remain unsolved, and white spots will still be present in the history of the ancient Russian sword.