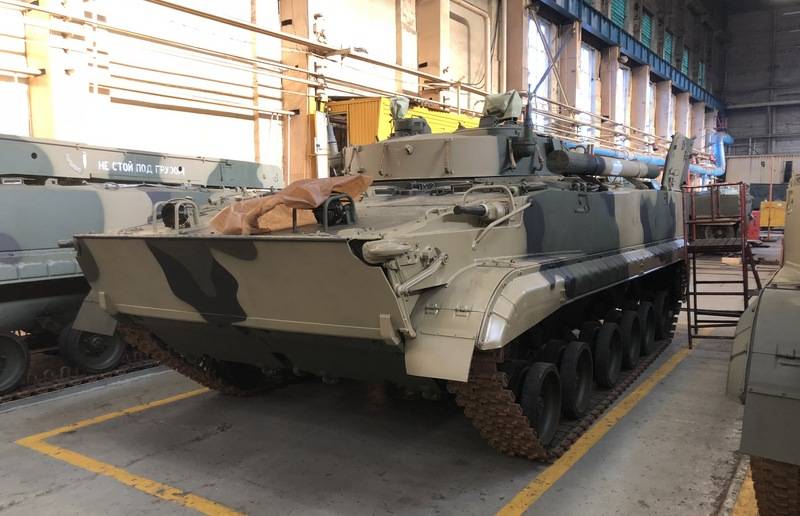 BMP-3 in the shop "Kurganmashzavod". Photo January 2019 of the year

Kurgan Engineering Plant, the sole manufacturer and supplier of infantry fighting vehicles, received a new contract for the supply of 168 BMP-3. Information on the conclusion of the contract is available on the public procurement website.

According to the published documentation, the contract was concluded between the Tula JSC Design Bureau of Instrument Engineering named after Academician A. Shipunov and PJSC Kurgan Machine-Building Plant for the purchase of 168 infantry fighting vehicles BMP-3 to secure the state contract from April 29 on 2019 for subsequent delivery Ministry of Defense of the Russian Federation.

The total value of the contract is 14 billion. 215 million rubles. The implementation of the agreement is divided into two stages: in 2020, the Kurgan should deliver the Ministry of Defense 53 BMP-3, and in 2021, the rest of the 115 infantry fighting vehicles.

According to the bmpd blog, BMP-3, according to the 688B-SB6-2 specification, the Russian Defense Ministry will be delivered in a slightly modified form with enhanced protection, and not with the uninhabited Epoch module developed by the Tula KBP, as previously assumed.

We are in Yandex Zen
The 20 rating of the largest arms deals, decisions on which were made in 2012
Money for the army is not enough
Military Reviewin Yandex News
Read Military Reviewin Google News
98 comments
Information
Dear reader, to leave comments on the publication, you must to register.