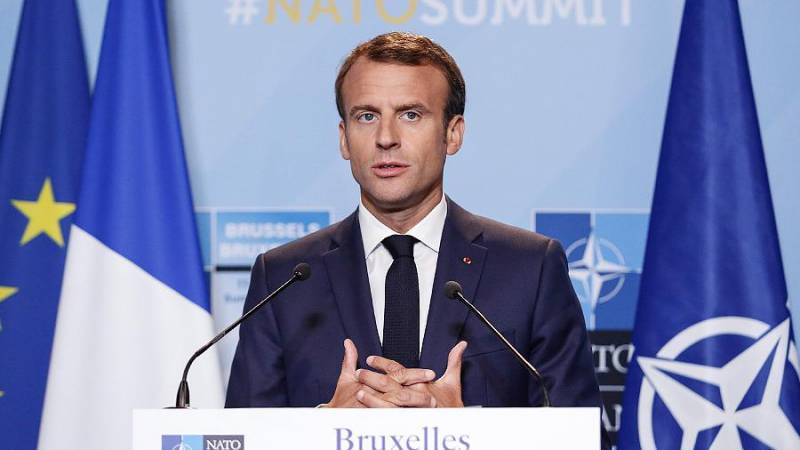 The tough remark by French President Emanuel Macron on the North Atlantic Alliance has excited Europe. The French president said that NATO "brain died", and these words, of course, could not remain unheard.

Emmanuel Macron's loud statement, in which he sharply criticized the North Atlantic Alliance and the United States policy in Europe, could not but provoke a negative reaction from the heads of European states and NATO itself. Thus, the Secretary General of the alliance, Jens Stoltenberg, said that he did not share sharp assessments of the structure’s activities on the part of the French president.

Interestingly, they criticized Macron’s words in Berlin as well. Although it was FRG Chancellor Angela Merkel who always agreed with Macron on the creation of a pan-European army and shared his skepticism about the North Atlantic Alliance. However, here the “Iron Frau” gave the back, and this only indicates that the situation in Europe is really very serious.

First, the American leadership seeks to free itself as much as possible from the costs of maintaining the North Atlantic Alliance, including even American military bases in Europe. Washington’s main goal today is to shift the financial burden onto European allies, that is, France and Germany in the first place, since it is not Latvia or Albania that will pay for the presence of American troops on European territory. 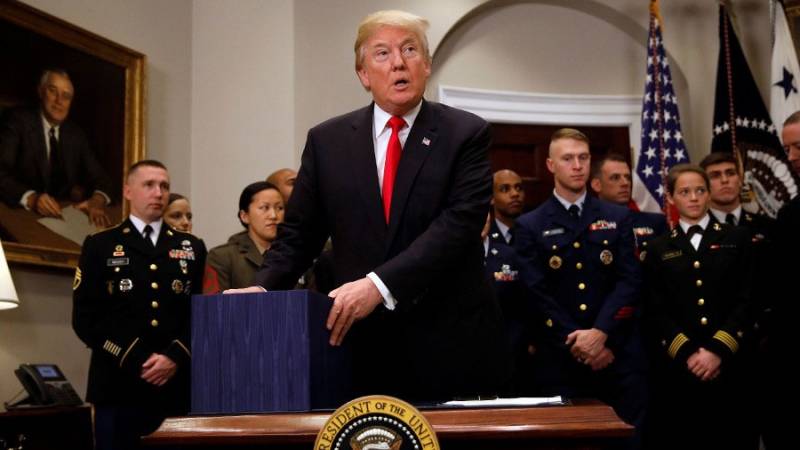 The policy to reduce costs at foreign bases fits into the course of President Donald Trump, who is very dissatisfied with the colossal US spending on the maintenance of his armed forces in the Middle East, Africa, and Europe. Now the US administration is pushing for Europe to pay 4% of each country's GDP for military spending.

But what military expenses can Belgium, the Netherlands, and even Germany have? This is solely the content of the structures of the North Atlantic Alliance, US military bases, the acquisition of American weapons and military equipment. In Berlin, such a demand is criticized, because they do not see the need to increase military spending.

Secondly, European countries after the events in the Middle East no longer trust the United States. Washington quite easily abandoned its "younger" allies - the Syrian Kurds, in the equipment and training of which significant sums were invested. Moreover, the United States ceded control of Syria to Russia and allowed Moscow to directly address strategic Middle East policy issues with Ankara and Riyadh.

Naturally, this behavior of the United States led to the fact that many former American allies were tormented by doubts about Washington’s desire to patronize its European and Asian partners. Of course, in the Baltic States and Poland they are still confident in American assistance, but the countries of Western Europe are much more cautious.

Macron and the European Army

For the first time, the need to create a European army, Emmanuel Macron spoke a few years ago. He already shared the conviction that the NATO structure had outlived itself as such and was no longer needed by European countries. But, refraining from open accusations against the alliance, the French president masked his distrust of NATO by concern about the creation of a pan-European army. 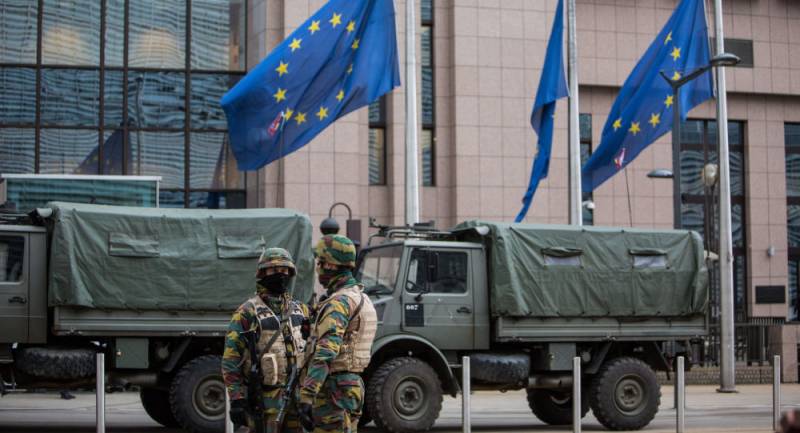 The Joint Armed Forces of the European Union is Macron's long-standing project, which goes back to the post-war years. Actually, NATO was planned as a pan-European military-political union, which would ensure the protection of European states from external risks. But the United States, initiating the creation of the alliance, completely crushed it for itself, and as a result, NATO is not a European military structure, but an instrument for promoting American military-political interests in Europe and the Mediterranean region.

As practice shows, within the framework of the North Atlantic Alliance, European states retain the role of the financial and military servants of the American armed forces, performing secondary or, on the contrary, the most dangerous tasks where the Americans for some reason do not want to be substituted.

Therefore, the idea of ​​creating a pan-European army, which Macron advocates, is just a redesigned concept of renewal of the North Atlantic Alliance. But since it is impossible to expel the United States and Great Britain from NATO, Macron speaks of the need to create a new structure. The basis of the new structure would be key EU countries - France, Germany, Italy, Spain, Benelux states, possibly Central European countries, including those that are not currently part of NATO (Austria, for example).


NATO as a tool for managing Europe

As long as NATO exists, the European Union is politically and politically dependent on those countries that are not members of the EU, such as the United States, as well as the United Kingdom, which launched the process of withdrawing from the European Union. As soon as a pan-European army is created, the EU’s need for NATO will simply disappear. And NATO will become a completely useless organization for European states.

This is well understood in the United States, and therefore fear Macron’s position on the creation of the armed forces of a united Europe. After all, what are the consequences of the implementation of the Macron project? First of all, if Europe has its own military structure, defense spending will be redistributed. And France and Germany, other EU member states will then first of all finance the new structure, and not NATO.

Accordingly, the question will arise of financing the North Atlantic Alliance, and if European states do not do this, then the entire financial burden will fall on the United States. The situation will be exactly the opposite of what Trump dreams of - not European countries will contain NATO and American military bases, but the US budget will be spent on financing the structures of the North Atlantic Alliance.

Finally, if Europe has its own military structure, the question will arise about the advisability of further US military presence in European countries. While the Americans are in European countries as Allies in the North Atlantic Alliance, but if the alliance recedes into the background or ceases to exist, the situation will change radically. Meanwhile, no matter how trump spared money on maintaining overseas bases, the American leadership needs them. Otherwise, American political influence in Europe will also end.

Without NATO, European countries will have the opportunity to act more independently in foreign policy, including outside of Europe. For example, in the Middle East, American actions often went against the position of European NATO allies. Here it is worth noting the irritation that the Middle Eastern allies of the United States, including Turkey, cause in Europe.

In European capitals, much more than in Washington, they pay attention to such issues as the rights of national minorities, people, women, and environmental protection. And on all these issues, Germany, France and other European states have a number of complaints against Turkey, Saudi Arabia, and many other traditional allies of the United States.

Another problem point is relations with Russia. Unlike the USA, the countries of Western Europe nevertheless strove to maintain an acceptable level of relations with our country even after the 2014 year. Anti-Russian sanctions imposed by the European Union at the filing of the United States hit European manufacturers themselves, and this is well understood in Paris, Berlin, and Rome.

It’s just that the elements of “external control” on the part of the States do not allow Europe to independently determine its foreign policy in relation to our country. Otherwise, EU sanctions would have been lifted long ago as harmful to the European Union itself. Washington, in turn, also exerts pressure on European states through the NATO structure, blackmailing Western Europe with the withdrawal of its military bases and the supposedly complete defenselessness of Europe against Russia.

However, Macron may well recall that France is also a nuclear power and, if necessary, is able to take care of the security of the European Union on its own. In fact, this means that the head of the French state is ready to abandon the dubious "American defense" and claims to be a European leader. After all, if the United States leaves continental Europe, then who, if not France, should take the palm in European politics and head the new military-political structure within the European Union, which President Macron dreams of? 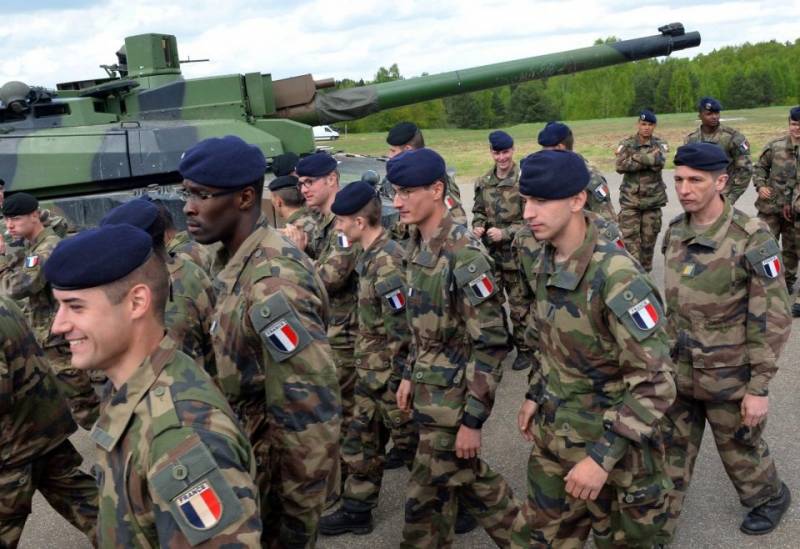 And here a critical assessment of his statement by the German leadership is understandable. Berlin is now the main partner of Paris in the European Union, but he is also a rival, a competitor, moreover, a historical one. And it’s one thing when the leader in the person of the United States dominates European countries, and quite another when France, which historically lost Germany several wars, suddenly becomes unambiguous (due to the presence of nuclear weapons) the leader of the new European alliance.

However, Macron’s loud statement cannot be silenced. The fact that the president of one of the largest powers in the Western world and NATO announced the death of the North Atlantic Alliance, indicates that the latter is really about to come. Yes, maybe NATO will not officially cease to exist, but the real capabilities of the alliance may change beyond recognition.

The power of NATO today rests on the Americans, British, Germans, French, Italians, Greeks, Turks. If we cut off Turkey, which is already in difficult relations with the United States today, then the Anglo-Saxons and countries of continental Europe, thinking about creating a pan-European army, will remain.

There is still Eastern Europe, but everything is much less clear there. Some countries of Eastern Europe gravitate towards the EU, others - like Poland and the Baltic states - are more tied to the United States and American political, financial and military support.

Without France, Germany, Italy, the North Atlantic Alliance could exist, but in a very cropped form. In fact, it will be the Americans and the British, plus completely incapacitated and extremely small satellites from Eastern Europe. And, most importantly, as mentioned above, all the financial costs of maintaining the structure will fall on Washington's shoulders. Not Estonia, in fact, to finance NATO!

We are in Yandex Zen
Situational analysis of the death of the MH17 flight (Malaysian Boeing 777), made on the basis of engineering analysis from 15.08.2014
Syria: Americans scare themselves, and Asma Asad buys chairs
Military Reviewin Yandex News
Read Military Reviewin Google News
20 comments
Information
Dear reader, to leave comments on the publication, you must to register.