Do you need to wait for new arrests at Vostochny? 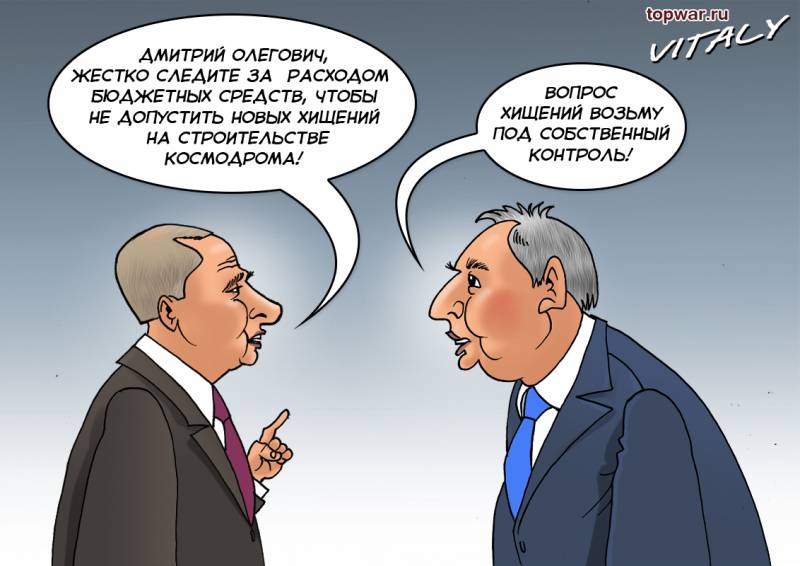 They say that Akela missed. He said that at the construction of the Vostochny cosmodrome they continue to steal, despite landing. But it was rightly delicately corrected: you say, dear Akela Vladimirovich, you are right, with the exception of one nuance - theft has a limit, everything is normal at the construction site, key objects will be commissioned in the first quarter of the 2020 of the year (that’s about to happen!), the adversaries are all in prison, our unwavering hand lies on the pulse. The head of Roscosmos himself, Dmitry Rogozin, entered into correspondence controversy with the president, and he knows the question like no other.

What sets the law of the jungle in the case when the leader of the flock misses, we will not voice, and you are strongly forbidden to google. Let's say one thing: the situation smacks of some seditiousness. And the president’s passage itself is no longer so interesting, how curious is the reaction to it from the side ... Yes, from all sides, what is there to stand on ceremony.

For example, I was struck by the evolution of headlines that erupted in our media. If at first it was a “bare statement”, in the spirit of “the president said that thefts were thriving on the construction of the Vostochny cosmodrome,” they soon gave way to formidable “the President expressed indignation at the ongoing lawlessness at the construction of the cosmodrome!” Do you think this all ended? No, headlines appeared in the spirit “The people are dissatisfied with Putin, who cannot stop lawlessness on Vostochny!” And this is very symptomatic: who would believe such a thing five years ago, in the wake of popular love for Vladimir Vladimirovich, raised by the sudden visit of “polite people "to Crimea?

And now it seems that this is in the order of things. And you involuntarily conclude that the Kremlin is just as bad in domestic politics as it is good in foreign policy - you still have to try to lose the support of the population that Putin had. 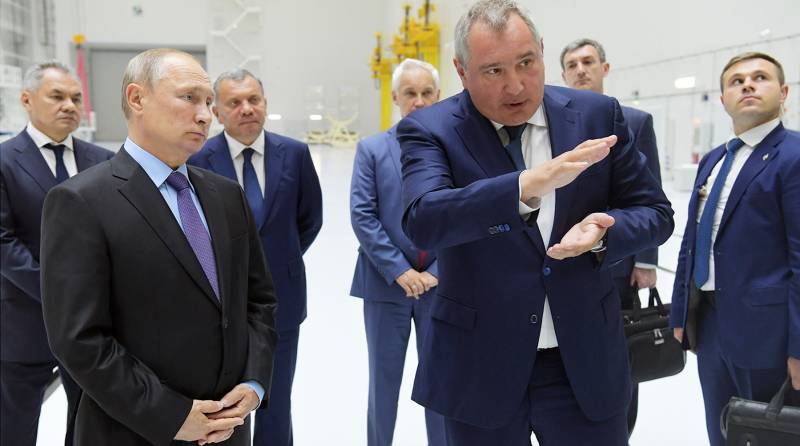 In fact, if we talk about the essence of the issue, then everything is quite transparent: Vladimir Vladimirovich, it seems, really was mistaken. After investigations and landings that took place several years earlier, the situation on Vostochny looks rather calm. Yes, on 2018, inclusively, 1,7 of thousands of different offenses during construction were established, 140 criminal cases were instituted against builders of different levels. More than 10 billion rubles of violations have been identified. 3,5 billion returned to the state. But almost two years have passed since then. And while, as they say, "pah-pah-pah!" ...

Of the largest, most significant cases, one should single out the arrest and the subsequent term for the former head of Dalspetsstroy, Yuri Khrizman, who received, according to a court decision, 12 years of imprisonment and a fine of 1,5 million rubles. Later, on appeal, the court reduced the term by half a year and reduced the amount of the fine by half a million rubles.

The son of Yuri Khrizman, Mikhail, was also prosecuted and received five and a half years in prison, as well as a fine of 800 thousand rubles. True, he did not completely serve his term; in 2018, the Supreme Court abolished his sentence in connection with the expiration of the statute of limitations.

Other main defendants in the case, Vladimir Ashikhmin and Viktor Chudov, were sentenced to seven and six years in prison, respectively.

Of course, there were other major cases, the defendants of which received real terms of imprisonment. In particular, Mikhail Gelman was sentenced to six years and three months in prison for the theft of approximately one 1,1 billion rubles. Also, an inquisitive reader can search the network for information about the affairs of Andrei Yartsev, Anatoly Ryazanov, Viktor Grebnev, Igor Nesterenko and other amateurs to confuse the state pocket with their own.

Oddly enough, this is for modern Russia, the severity and integrity of the investigation and judges have borne fruit: for more than a year now we have not heard about major thefts on Vostochny. Did it mean that Akela really missed?

Does Putin know something?

True, there is another option: Vladimir Vladimirovich knows something that we do not yet know. And if so, soon one should expect new arrests among the builders of the cosmodrome. In favor of this version is the fact that he rarely misses, especially if the situation caused him the highest anger, and in addition, he really does not like to look ridiculous and funny. And since now there is a reason for gnawing and quotes from the cartoon "Mowgli", Vladimir Vladimirovich will probably want to leave the last word for himself.

Therefore, Putin’s correspondence debate with Rogozin will most likely end not with a slap to the latter, but with demonstrative arrests of those who continue to steal on Vostochny. And this will probably be the best answer to the jokes: the jokers will calm down, and the looters will get another lesson.

In conclusion, I would like to say that the informational reason that became the reason for writing this article is actually not so interesting. Without exaggeration - from what we now know with confidence about the state of affairs on Vostochny, it is impossible to draw any conclusions about the theft that continues there, which means that it remains to discuss only the awkwardness of the president. Yes, this is also a legitimate reason for interest - such a position, every word will be examined and analyzed from all sides. But, frankly, the attempts by various media outlets to reanimate the old criminal cases and make some conclusions about the ongoing thefts seem rather pathetic.

Therefore, let's ask Vladimir Vladimirovich, saying “a”, say “b” already: who steals, how much, when will he be arrested? Without this, the situation is reminiscent of some kind of vaudeville, in which the first persons of the state somehow did not play.

So if you please, Vladimir Vladimirovich. Waiting for ...