The field of competition is space. Money for US space war with Russia and China 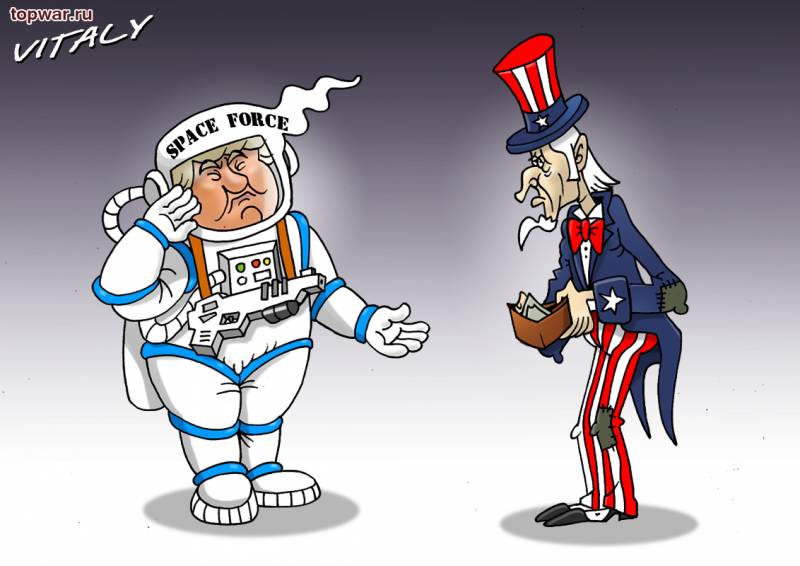 The military activity of Russia and China in outer space has long troubled the United States. Recently, US intelligence decided to study and assess the risks of striking satellites and other US space objects. In a special annual report, published November 14, a special place is given to economic and military threats from China and Russia.

American President Donald Trump, who is known to be an ardent supporter of the withdrawal of American troops from Syria and Afghanistan, shows a much greater interest in outer space than in Middle Eastern politics. According to Trump, it is outer space in the foreseeable future that will become the main field of competition and even confrontation between the great powers of our time - the United States, Russia and China. And Washington is facing a difficult task by any means to ensure American dominance in space.

It is no coincidence that it was Trump who decided to put into practice the idea, which, of course, appeared much earlier than his election as president of the United States, but still had no practical embodiment. It is about creating the Space Command of the US Armed Forces, which could be responsible for conducting hostilities in outer space. 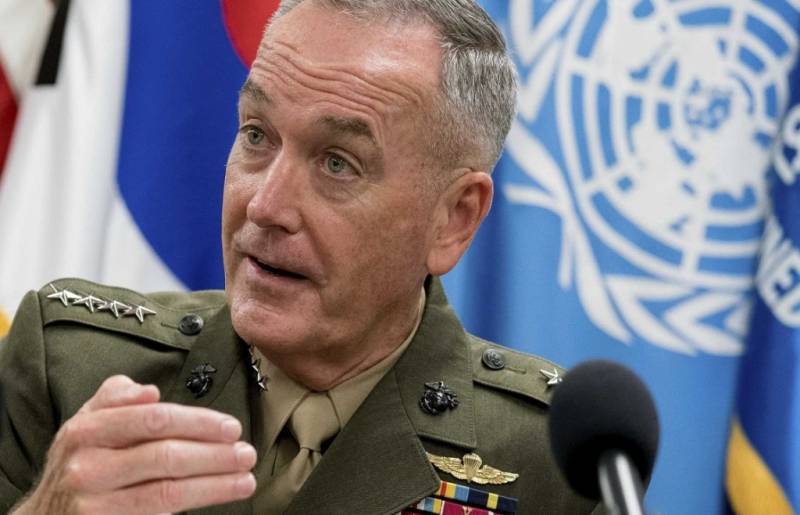 "The rivalry zone" is called space by the chairman of the Committee of the Chiefs of Staff of the US Armed Forces, General Joseph Dunford, who not so long ago, in his speech, listed the main sources of risk for US positions in outer space. According to the general, they come from Russia and China, but Iran and North Korea should also be discounted.

The American leadership sees a great threat to US positions in the fact that other countries are also developing their space programs, creating military space forces, experimenting with various types of weapons. For example, anti-satellite trials have caused great concern for Americans. weaponsconducted by India, although Washington never saw New Delhi as an adversary. But the mere fact that more and more states are joining the space arms race cannot but arouse American suspicion and, accordingly, do not manifest themselves in the desire to create their own cosmic forces.

According to international agreements, at present, only the placement of weapons of mass destruction is prohibited in outer space. Nothing is said in the treaties and agreements regarding conventional types of weapons, but until recently, not one of the space powers has declared that it has placed any weapons in outer space. So far, the confrontation is unfolding rather in the field of technologies used in the organization of space intelligence, in the field of space defense.

But there is no doubt that the buildup of space weapons and the creation of new technologies will continue. Not for nothing that Donald Trump himself called space the next area of ​​hostilities, and the head of Roskosmos Dmitry Rogozin shared the words of the American president, also emphasizing that he had no doubt about that.

The American edition of Bloomberg has published interesting material on the position of US intelligence services, which are now very closely watching any new technologies that Russia and China are testing in outer space.

Intelligence data will be needed to create the US Airspace Command, to develop the concept of logistics and training personnel. This was reported by the official representative of the US Air Force Lt. Col. Christina Hoggatt. Thus, she openly confirmed that the American intelligence community is currently analyzing and evaluating the strategic capabilities of Russia, China, as well as other states operating in outer space.

Every two or three years, the US intelligence community conducts a kind of “audit”, evaluating the space potential of China, Russia and other states. The main task is to identify what new types of weapons or technologies they have appeared, what space activity threatens the USA with and what are the future prospects.

The interest of US intelligence in space programs in other countries is not unfounded. In the United States, Russia and China have more than ever strengthened their presence in space. President Trump believes that the reason for this is the insufficient level of attention of Washington to outer space during the reign of his predecessors. As a result, the power of China and Russia has increased. For example, China is developing at once in several directions - these are systems for direct launch into orbit, and systems for hitting targets in outer space.

American experts say that today Chinese systems are capable of hitting almost all US space objects. Naturally, this state of affairs cannot but cause particular concern to the military leadership of the United States. Moreover, China regularly conducts exercises, fulfilling the tasks of hitting targets in outer space. US intelligence also has information that the PRC considers the American space infrastructure to be more vulnerable.

The head of the US Space Forces command, General John Raymond, in an interview with reporters noted that the Pentagon is well aware of the Chinese strategy for positioning in outer space. The Chinese, according to the American general, create directional energy weapons and lasers to "blind" American satellites. 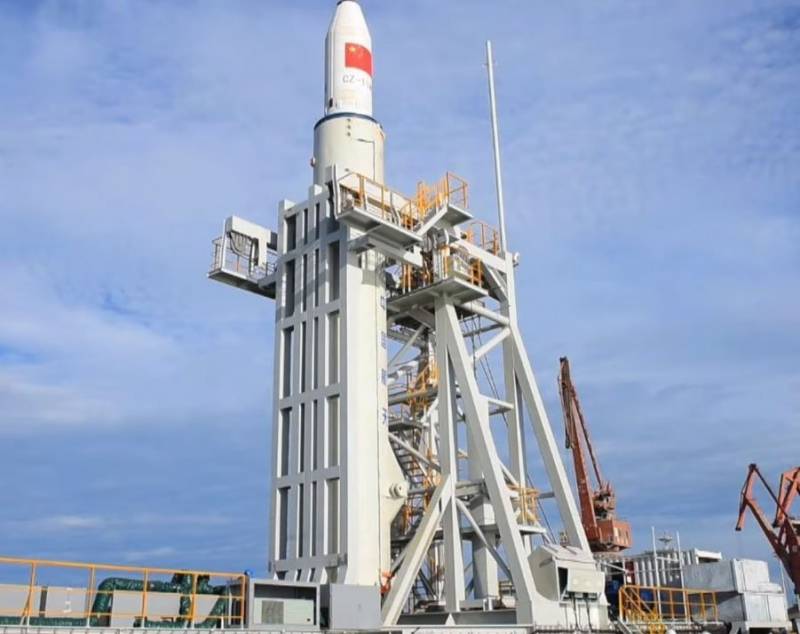 In the United States, there is no doubt that many of China's space projects, supposedly being civilian, actually have a dual purpose and may well be used for military purposes. And these fears really have reason, especially since President Xi Jinping has never hidden his ambitious plans to transform the Celestial Empire into a strong power not only on Earth but also in outer space.

As for Russia, it is worth recalling that the space industry is, for all its strategic importance and connection with the military sphere, one of the few areas in which cooperation with the United States has not stopped so far. The American space industry is largely dependent on the Russian: these are the launches of Soyuz rockets and Russian rocket engines.

However, recently the American administration has embarked on the final cessation of any interaction with Russia in the space sector. But whether the United States succeeds is not very clear: according to American analysts, abandoning Russian RD-180 engines will require at least 1 billion dollars of investment, but most importantly, it will take at least a five-year period.

The active actions of Russia in space are very worrying for the American leadership, since Washington is very concerned about improving the space defense of our country. A special report by the U.S. Army Institute for Strategic Studies emphasizes that the Soviet Union, during the global confrontation during the Cold War, possessed weapons such as direct-launch anti-satellite missiles, interceptor satellites, and directional energy systems.

In modern Russia, American analysts emphasize, these weapons can be restored, which will significantly increase the vulnerability of American space objects. The usual American demagogy is to blame Beijing and Moscow for the escalation of tension anywhere, including in outer space.

Although in reality it is Russia and China that come up with proposals for the demilitarization of outer space. For example, Moscow and Beijing proposed a draft treaty on the prevention of the placement of weapons in outer space, the use of force or the threat of force against space objects (DPRK). But the American leadership deliberately avoids signing such agreements, which shows the true goals of the United States in space.

So, the Pentagon is asking for increased budgetary spending on space programs of the armed forces. Moreover, the growth of funding, according to the US military, should be quite substantial. The budget for the 2020 year is asked to lay 14,1 billion dollars, which is 14% higher than in the previous 2019 year. But it is far from a fact that henceforth the American congressmen, especially the democratic majority, will follow all the wishes of the American military. 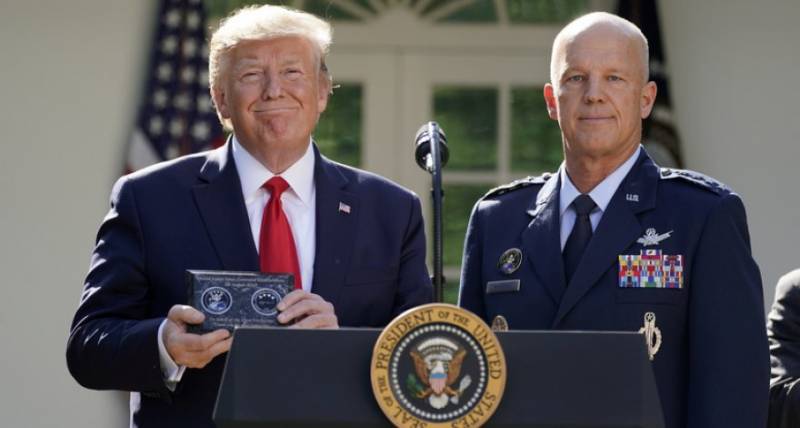 In 2018, American congressmen and senators were very skeptical of the very idea of ​​creating a separate US Space Command. Naturally, they did not show a special desire to increase spending on the formation and strengthening of a new type of armed forces, which Donald Trump insisted on.

By the way, the former US Secretary of Defense James Mattis was once very skeptical of the idea of ​​creating space forces. Disagreements with Trump on a number of key issues, including the creation of the Space Command, ultimately cost the over-arrogant and own position of Mattis as head of the US military.

It is possible that numerous statements by representatives of the Pentagon and the US National Intelligence Service may set themselves the task of justifying the need for such high budget spending. Even if the threats from China and Russia are not so great as the responsible generals say, they should be inflated, if only for the sake of increasing budget funding.

Actually, this is the same scare strategy used by the Baltic countries, painting the United States and the European Union mythical threats from Russia in order to receive additional funding. True, in this case, if we talk about the competition of space programs and the confrontation in space, we have a real risk. It cannot be denied that both Russia and China are conducting very successful developments in the space sector. The Americans, however, act in exactly the same way, not forgetting their own military space programs.