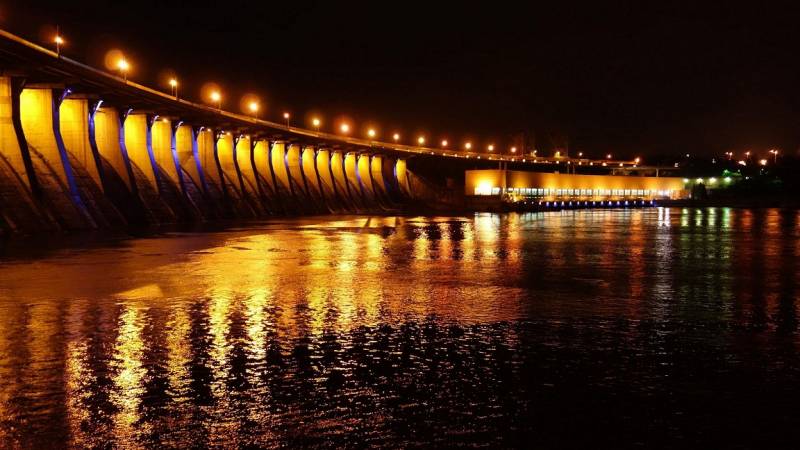 More often from Ukraine come news about the next fall of the bridge, the collapse of the house, the failure of the asphalt surface of the road, the malfunction of the nuclear power plant, etc. Emergency geography is expanding every day: Kharkov, Odessa, Lviv, Ternopil regions and, of course, Kiev. The frequency of such news recalls reports from the front. At the same time, the infrastructure of prisoners is not taken. The main thing is that the frequency of such news is such that it accustomed us to the routine of the ongoing infrastructure nightmare. Even the next emergency at the nuclear power plant, which previously made the author startle, is perceived with some boredom. Alas, behind this heap of emergency some significant moments are sometimes lost that can entail colossal consequences.

"Decommunization" of the Dnieper on the march

More and more dangerous “bells” come from the Dnieper Hydroelectric Power Station. Ten years ago, a group of Ukrainian experts stated that part of the dams of Ukraine on the Dnieper are in a dangerous condition and require serious repairs. But in full, even then, the work was not done. Therefore, at the moment, the collapse of a whole cascade of dams along the Dnieper is a threat.

If the Kiev dam collapses (just north of the capital), then the stream will first destroy the city bridges, half of which are also in disrepair, not counting the flooding of large areas of Kiev, and later rush down the Dnieper. The next in line will be the Kanevskaya dam, whose hydroelectric power station is more powerful than the Kievskaya dam. She also can not stand the blow of a powerful wave. After some time, the Kremenchug dam will sink into oblivion. 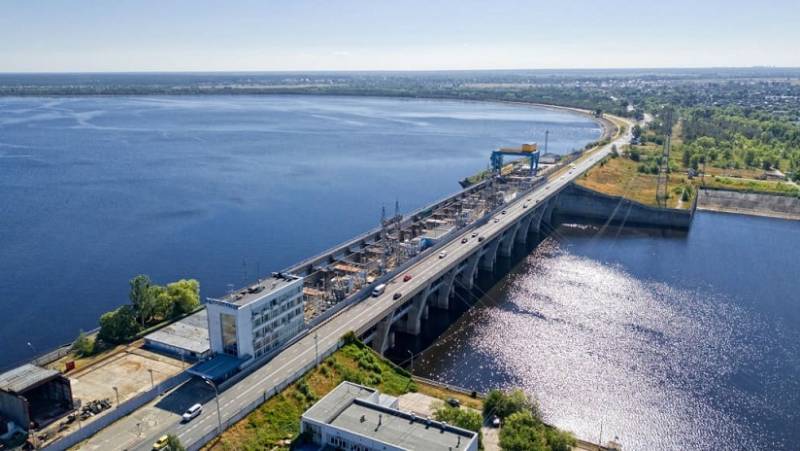 The consequences should be discussed separately. Indeed, despite the apocalyptic nature of such an outcome, this scenario is far from the only one capable of finally “decommunizing” the great river of Ukraine.

The phrase “the bridge is a little tired”, which has become a catchword, belongs to the mayor of Kiev, Klitschko. He burst out with this comical tirade immediately after he arrived at the site of the collapse of the capital's Shulyaevsky bridge. Oddly enough, but in a sense, our chrysostom was right. Ukraine’s infrastructure is really tired. As for the Dnieper hydroelectric station, without the cascade of crashes along the Dnieper, the facility is ready to collapse.

The first alarming news about the state of the Dnieper hydroelectric station was heard last year, and at the beginning of the 2019 year, the authorities of Zaporizhia completely prohibited the movement of vehicles weighing more than 25 tons on the dam. This step of frank despair is the last hope that the dam will not collapse.

True, you should not expect any result. After all, the ban does not apply to city, suburban and social transport, garbage trucks and emergency vehicles. In addition, no one will guarantee that in a poor country for a share of a small local guardian of the road order will not miss another truck.

It is worth noting that the “body” of the dam during the Great Patriotic War was blown up twice and restored twice. But conversations about the overhaul of DneproGES began to be conducted back in the 80-s of the last century. But at the same time, thorough construction and modernization was going on all over Ukraine - a farewell gift to the ungrateful offspring from the Union. Therefore, while the project on the Dnieper hydroelectric power station was being approved, the USSR itself collapsed, and the new leadership of the former USSR was occupied with completely different things. As a result, the turbines were just changed at the hydroelectric power station. 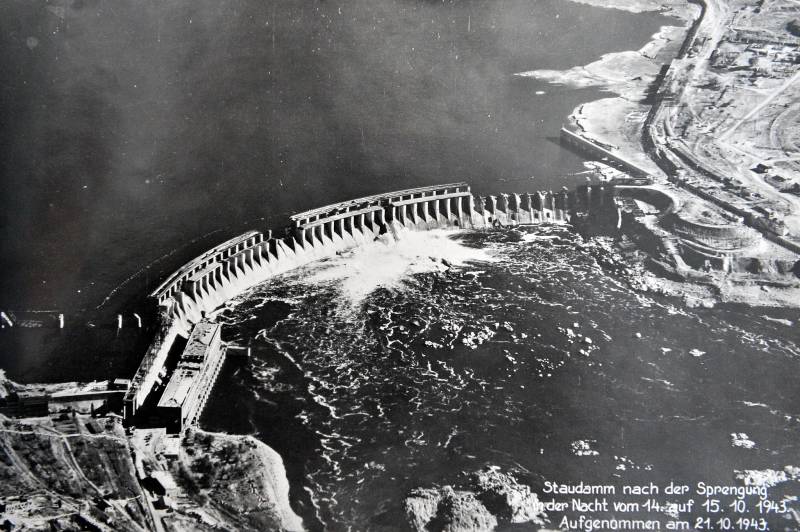 Germans blasting the Dnieper hydroelectric dam (photo from a German airplane, 1943 year)
During this truncated modernization, specialists naturally conducted a detailed survey of the dam. Multiple through cracks up to 1,5 millimeter wide were discovered. And already in the 2009 year, the mayor of Zaporozhye Yevgeny Kartashov sent a letter to the Cabinet of Ministers of Ukraine asking him to “determine the accident rate of the Dnieper hydroelectric dam”. Also, the mayor asked to speed up the process of allocating funds from the reserve fund of the Cabinet of Ministers in the amount of 7,7 million hryvnias for priority work to eliminate the emergency.

The mayor argued a similar request with very frightening data. So, according to him, the construction of the carriageway of the dam has cracked and is already a security risk. And according to unconfirmed reports, LLC Zaporizhmost and even claims a sharp deterioration in the situation at this facility.

At the same time (given the extraordinary politicization of everything and everything in the modern world), it is almost impossible to achieve intelligible answers from Ukrainian, however, and some Russian specialists. Some beat the alarm; others duplicate the phrase "you are lying." For example, a homegrown scientist and hydrologist engineer Yuri Medovar said that he “visited DneproGES” and made sure that it was a “colossal structure”, and therefore there is nothing to fear. After these words he became even more uneasy, because Medovar is an old, ardent oppositionist, an “apple-boy” and one of the prophets of “the destruction of the Crimean bridge immediately after putting it into operation.”


It is clear that in the current situation it is extremely difficult to give an objective assessment of the state of DneproGES, but the consequences were predicted long before the Maidan - during the emergency services exercises, therefore they can more or less be trusted. 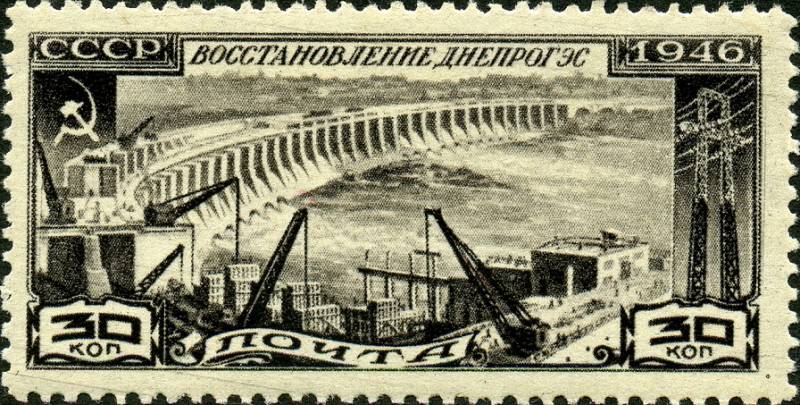 Definitely will be completely flooded Zaporozhye. In some areas, water will rise by 8-12 meters. This mark will be held for about 4-7 hours. A complete decline in water is expected only four days later. In this case, flooding will be rapid and catastrophic.

It will be swept away by a huge 20 meter wave, which will move at a speed of 17 meters per second. Naturally, all bridges on the Dnieper will be completely destroyed. In the zone of catastrophic flooding will be over 100 thousand people only in the city of Zaporozhye.

In addition, even after the departure of water throughout the flooding, there will remain from half a meter to a meter of sludge and various garbage. The main thing is that sewage and toxic waste will burst out, which will cause a terrible epidemiological situation in the entire region. However, given the current situation in Ukraine, the true extent of the tragedy cannot be predicted for certain. In addition, in 70 kilometers downstream of the Dnieper is the Zaporizhzhya NPP. At the same time, only the consequences of the destruction of the Dnieper hydroelectric station are presented here, and to predict the results of the cascade of collapses, starting from the Kiev hydroelectric station, is generally unusually difficult, and scary. And all this will definitely affect Russia, the consequences are too widespread: migration, epidemics, environmental conditions ...

We are in Yandex Zen
Interview of V. Putin to Channel One and the Associated Press Agency
What you didn't want to know about England
156 comments
Information
Dear reader, to leave comments on the publication, you must to register.