I was once called a Russian name here. "Language Protection" in Azerbaijan 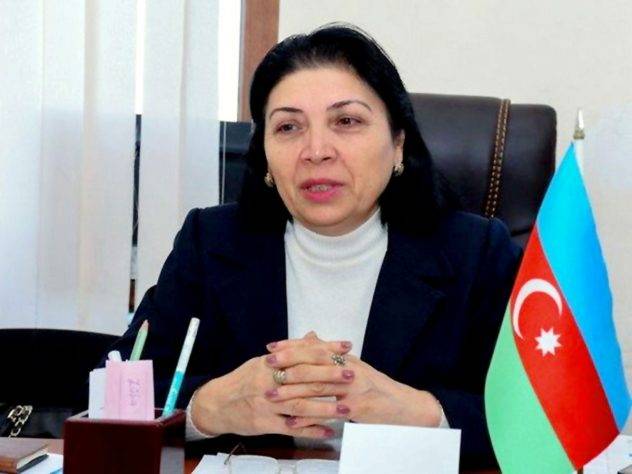 Sayaly Sadigova, apparently, does not know that abroad all the Soviet, former or not, are still Russian

Not found in Saints

In mid-October, the deputy chairman of the Terminology Commission under the Azerbaijani cabinet of ministers Sayaly Sadigova told local media that residents of a country of Azerbaijani nationality "are forbidden to call their children Petram, Ivanov, Pavel, Tatyana. We cannot bring Russian names to Azerbaijan. We need to protect our language from external impact. "

Further, it is explained in almost European style: "Representatives of any other nationalities in the country can call their children as they like, but not Azerbaijanis." And this is not said by some fake nationalist, but by a lady who occupies a completely responsible and, in a sense, a key state post.

A terminological (a term they came up with) a commission has existed in Azerbaijan since 2012 of the year. In its composition, the unit headed by S. Sadigova deals almost exclusively with first and last names. Periodically, with the approval of the commission, it publishes lists of names that are no longer available when a child is named. What is called, in the calendar is not found.

At first, the official prevented the spread of mainly the names of the Stalin period, as well as the Iranian and Lezgin ones: Tractor, Combine, Ensemble, Ulyana, Stalin, Electra, Sarkhosh, Shushebend, Dzhinayatkar, etc. However, with 2015, it seems that the time has come to fight for something else - bans began to apply to other "non-Azerbaijani" names.

At the same time, names of Arab and especially Turkish origin, which have been leading in popularity in the country since the mid-90s, are by no means prohibited. It doesn’t occur to anyone to worry about a certain “national identity”. Moreover, the “western” names in Azerbaijan also remain outside of any embargoes.

“Yes, we have European names that are not banned, despite the fact that they do not sound Azerbaijani,” Ms. Sadigova said. 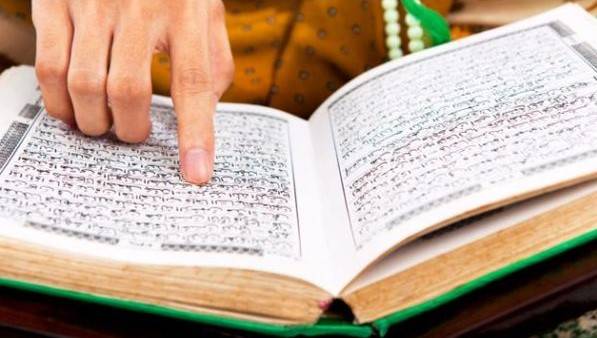 The political background of such a course is so obvious that it can no longer be ignored. However, Mikhail Zabelin, chairman of the Russian community in Azerbaijan, in this situation is not in a hurry to call a spade a spade. So, in a recent blitz interview with a number of news agencies in Azerbaijan, he quite diplomatically and pragmatically noted that "some officials, in an effort to show themselves to be more patriotic than others, sometimes go too far."

But personal issues "must be resolved not by prohibitions, but by informing and explaining. So that people do not get into trouble by calling the child a name that will create him complexes and unnecessary problems in life."

In fact, Mr. Zabelin warns that it is better for Azerbaijanis not to risk not complying with the anti-Russian regulations of the commission. And prefers not to notice their frankly Russophobic character.

Something similar or even similar is happening, as is known, not only in Azerbaijan. On what, on November 6, the head of our state Vladimir Putin drew attention, speaking at a meeting of the Presidential Council on the Russian language:
“... today we are faced with attempts to artificially, roughly, sometimes unceremoniously reduce the space of the Russian language in the world, oust it to the periphery. Not only cave Russophobes declare war on the Russian language: aggressive nationalists, various kinds of marginals, are actively working in the same perspective. Which in some countries is becoming a completely official state policy. ”

This, according to the Russian president, is “a direct violation of human rights, including rights to culture and historical memory. "Vladimir Putin did not directly call Azerbaijan, but it’s obvious that this country is among the others.

Even in the ranks of the Russian public, there are no questions to Baku about such a sophisticated version of Russophobia. Although it is undoubted that his “impunity” is a frank signal for other CIS countries, where, fortunately, they have not yet thought of such measures. However, maybe it was not by chance that Azerbaijan was “assigned” to designate such a policy in the neighboring countries of Russia in the CIS and the former USSR?

Apparently, the Russian side, for obvious political reasons, is afraid of "annoying" Azerbaijan with an officially concrete criticism of the prohibitions on Russian names. Why, even Azerbaijani oil is partially exported through a pipeline through the North Caucasus to the ports of Novorossiysk and Tuapse, and these are significant transit revenues: a maximum of 70 million dollars per year.

Moreover, the pumping volumes here, according to Transneft (1 of September this year), will increase from 3,3 million tons in 2018 to 5,3 million tons in 2019, which, naturally, will increase those revenues. And this transit, of course, is also important politically for the Russian Federation. Why are these numbers here? And besides, the Russian name seems to be getting too expensive.

The economic factors of Russian restraint, of course, are taken into account by the Azerbaijani authorities. Therefore, they are not too shy in the original Russophobic manifestations? ..

By the way, what is interesting: up to the 2009 of the year, even on the labels of blackberry juice, which was produced in Azerbaijan, it was clearly noted in Russian: "The manufacturing technology is Russian." But just then, from the beginning of the 2010's, the campaign to rename streets and other objects with Russian names resumed in Azerbaijan.

So, in October 2018, the President of Azerbaijan Ilham Aliyev, at the end of this campaign, signed a decree “On the application of the Law of June 12 2018 on renaming certain territorial units of Agsuinsky, Astara, Goranboy, Geygelsky, Khachmaz, Khizinsky, Gazakh, Gubinsky "Of the Hussars, Massalinsky, Oguz, Saatli, Samukh, Shamkir and Yevlakh regions."

Does anyone have a short memory?

In connection with such trends, one cannot help but recall that all these decisions were preparing for "publicity", it seems, for more than a decade. And most likely, it was Russophobia, which was latent in Azerbaijan in the Soviet - even in the Stalinist period - that was the main reason for the execution of Mir-Jafar Bagirov, the leader of Azerbaijan in 1956-1934, in the 1953 year. 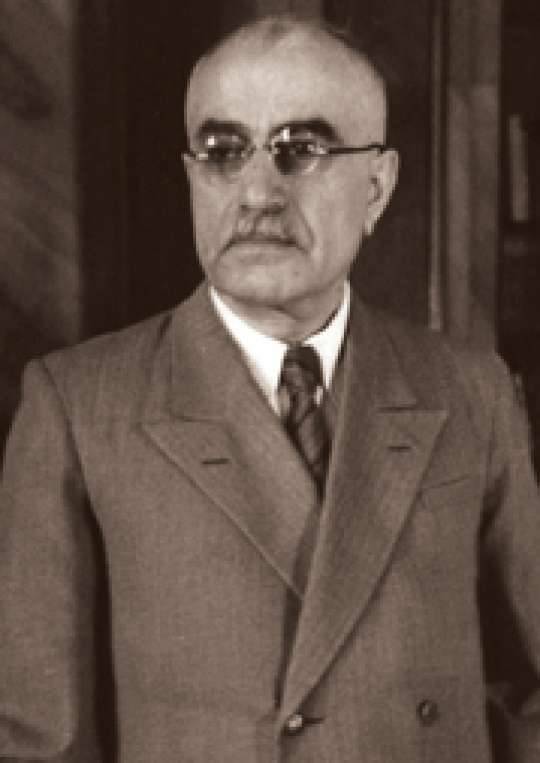 Mir-Jafar Bagirov
Calling him "a handy enemy of the people of Beria," M.-D. Bagirov was simply removed for active resistance to Russophobia, which was then only ripening. The views of this true internationalist can be judged even by a fragment from his speech at the 19th CPSU Congress on October 12 of October 1952:
"Last year, Voprosy istorii magazine, being the central press organ of the Institute of History of the USSR Academy of Sciences, started a pointless discussion about the so-called" Least Evil "in joining non-Russian peoples to Russia. This discussion did not help our cadres on the ground in the national republics the fight against the manifestations of bourgeois nationalism, if not the opposite.
This is instead of raising the question of the beneficialness of the accession of non-Russian peoples to Russia on the basis of numerous historical data, archival materials and documents. For many peoples in those specific historical conditions, when they were in danger of complete enslavement and extermination by the backward Turkey and Iran, behind which the Anglo-French colonialists stood, accession to Russia was the only way out and had an extremely favorable significance in their future fate.
It is not visible that the journal Voprosy istorii, guided by the remarks of Comrade Stalin on the role of the great Russian people in the brotherly family of the Soviet peoples, would comprehensively develop a question that is vital for further strengthening the friendship of the peoples of our country - about the invaluable assistance provided and rendered to all peoples of our country, our elder brother is the Russian people! " 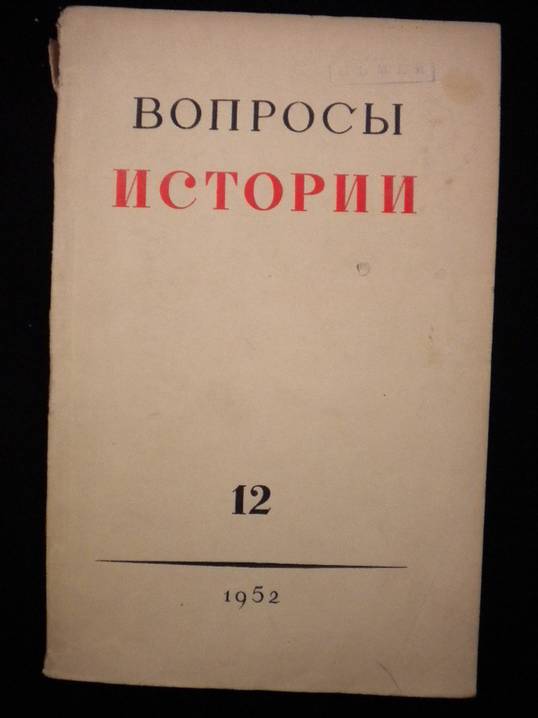 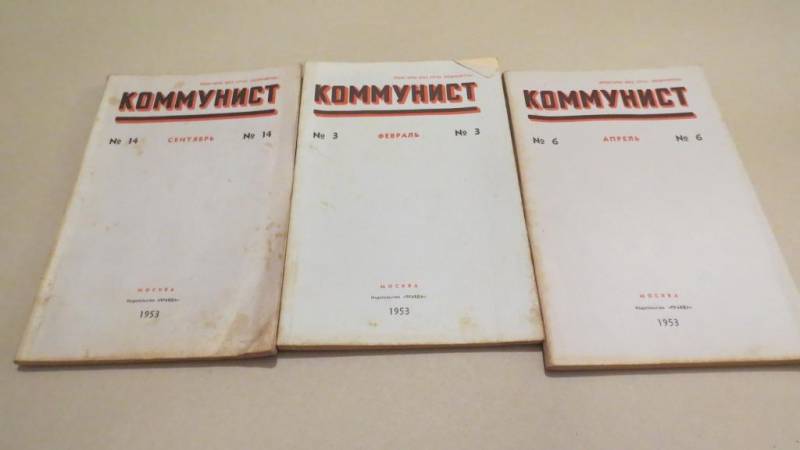 That discussion in the "Questions of History" was stopped already in November 1952, and the last chord M.-D. Bagirova on the same issues was his extensive article with similar accents in the journal "Communist" (Moscow) in February 1953: "The elder brother in the family of Soviet peoples." The magazine issue was signed three weeks before the "official" death of Stalin ...