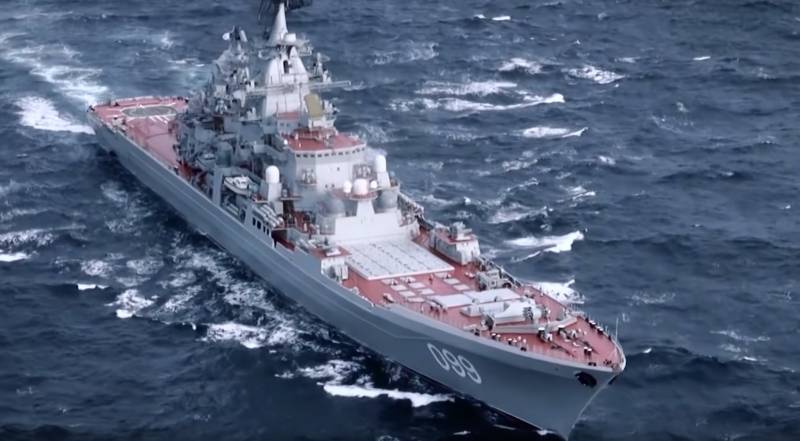 At the end of the 19th century, all of Europe and the rest of the world were struck by the advanced warship of Russia, bearing the proud name of Peter the Great. Its size and armament at that time were impressive. The implementation of such an ambitious project brought glory to Russian shipbuilders, and the Peter the Great, who took over the functions of a battle cruiser, was in service for about 80 years! Today the crew of the Polygon program of the T24 TV channel will tell (and show) the most combat, most shock and most atomic ship in Russia fleet.

What do you call a ship


At the development stage, Peter the Great was created to deal with aircraft carriers of the alleged enemy. However, the versatility of the cruiser allowed him, being in service since the 1998 of the year, to fulfill many diverse tasks, including the fight against terrorists and participation in the international coalition for the export of chemical weapons from the Syrian Arab Republic. Nuclear-powered icebreaker is capable of acting both as part of a group and alone. Together with the crew of Peter the Great, the crew of the Polygon program went from Severomorsk to the eastern part of the Mediterranean Sea, plunged into the processes of operating machines and mechanisms, examined the potential of an atomic cruiser in the conditions of a non-stop sea passage and witnessed firsthand the professionalism and coordinated work of naval sailors.

The second largest ship of the Russian Navy has a total displacement of about 25 000 tons, 6 decks and a height of almost 60 meters. The crew, consisting of 700 people, serves more than one and a half thousand rooms. The design feature of Peter the Great is the presence of two auxiliary steam boilers running on conventional fuel. The main power plant consists of two KN-3 nuclear reactors, each of 103 MW, which spin two turbines with a total capacity of 140 000 hp Two propeller shafts, thanks to the energy of the atom, drive two five-blade propellers. The KN-3 reactor is a double-circuit reactor and uses water for heating and cooling. Solid nuclear fuel is enclosed in a shell where a reaction occurs with the release of heat. Such cylinders are called fuel rods. They are installed in the reactor core and, using circulation pumps, primary water is pumped through them, which, when heated to 300 degrees Celsius, enters the steam generator. Secondary water, passing through the heat exchanger and becoming steam, enters the turbines and all auxiliary energy sources.

The main technical means of the warhead No. 1 includes a navigation system that calculates pitching angles, plotting with high accuracy and even issues recommendations on changing the position of the ship for using a particular type of weapon. New models of navigational weapons include electronic cartographic sound systems. They allow real-time monitoring of course changes and ship coordinates.

The power of this missile heavyweight is the attack of surface ships, the support of ground forces in the coastal zone, the destruction of aircraft and helicopters, as well as the fight against submarines and the defense of military formations of any ships. Acquaintance with the armament of Peter the Great is a real journey into the world of unlimited power. Here is the Fort anti-aircraft missile system, created on the basis of the well-known C-300 land system. Under-deck installations of a vertical type store 48Н6 missiles, allowing to expand the maximum range of destruction to 150 km. The Fort-M complex is also located here, an upgraded version with 48Н6Е2 missiles, which hit targets already at ranges of about 200 kilometers. The cruiser is designed for intense and fleeting combat, so the entire ammunition of missiles can be released in less than 5 minutes. In combat mode, 3 seconds elapse between missile launches. The launcher of the main complex of the ship is the P700-Granite system, which is a cruise missile aimed at destroying enemy aircraft carrier groups. This system was designed specifically for nuclear submarines, so one of the features of launching from Peter the Great is the injection of sea water before firing. The Granite cruise missile is an example of a very smart, self-regulating system. With multiple launches, cruise missiles in real time can distribute targets among themselves, exchange information and develop an algorithm for defeating the entire group. And even if the Granite missile defense system works, then a tonne finger damaged by 7 mixtures can still hit the target due to the huge initial speed and the downward trajectory of the fall.

Automatic artillery mount "AK-130" is designed to destroy sea, air and coastal targets - both visible and invisible. Gun rate - 90 rounds per minute. Maximum distance to defeat the enemy 22 km. The layered defense of Peter the Great has several more lines in the middle and near zone of responsibility. 16 launchers and 128 missiles of the “Dagger” anti-aircraft missile system reliably protect the atomic ship and its environment from low-flying targets, anti-ship missiles and guided bombs at ranges up to 12 km. An automated complex "Dagger" is operating in the near zone, which has two 30-mm guns and 8 missiles on each combat module, which hit the target with a probability higher than 95 percent.

There are one search and rescue and two Ka-27 anti-submarine helicopters on the nuclear powered ship. They are stored in the deck below the hangar and significantly expand the capabilities of the ship. This is a flexible communication tool between ship warrants and harsh bloodhounds, sharpened by the search for submarines. Despite the fact that Peter the Great primarily monitors the surface air situation, the sea kingdom is also under the vigilant control of the mine-torpedo section. Universal anti-submarine complex Vodopad-MK, which includes two rocket and torpedo launchers with a caliber of 533 millimeter, equipment for prelaunch missiles and a fire control system. The system is designed to destroy underwater targets at long distances. The calling card of Peter the Great is the MP-800 Flag radar complex, which is designed to illuminate distant airborne situations. Detection of low-flying targets and near airborne conditions is carried out by the MP-350 "Tackle" complex, which detects the enemy and gives target designation to anti-aircraft fire weapons.

Over the 18 years of the glorious service of Peter the Great, a heavy nuclear missile cruiser has traveled about 150 000 nautical miles. The longest trek in stories the ship took place from 2008 to 2009 years, when it covered more than 40 000 miles, having visited almost all parts of the World Ocean: from the Mediterranean Sea to the South and North Atlantic, in the Indian Ocean. For the first time in the history of the modern Russian Navy, the cruiser made a business call to the Republic of South Africa, the port of Cape Town. Such a successful nuclear missile cruiser service says a lot. Peter the Great is not just a highly specialized “aircraft carrier killer”. Ships of this class in the future will become wide-profile and multi-tasking platforms with an arsenal that will be enough for a whole order of ships of lesser displacement.