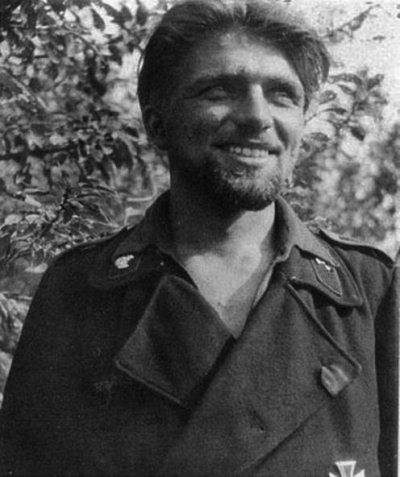 The famous portrait of Kurt Knispel, made by A. Rubbel in 1942. Photo History.wikireading.ru

In the troops of Nazi Germany there were many tank aces with large combat scores. The most productive tanker of the Wehrmacht and the entire Second World War is called Kurt Knispel. On his official account 168 of the enemy’s damaged armored vehicles, and taking into account unconfirmed victories, the score is approaching two hundred. However, such outstanding success raise certain doubts and leave questions. How did sergeant Knispel manage to defeat so many enemies and set a record?

In the post-war years, biographies of many German ace tankers were published abroad, but K. Knispel was not popular for many years. The situation changed only at the end of the 2000s, when the German historian Franz Kurovsky published the book Feldwebel Kurt Knispel. Subsequently, excerpts from this work were included in his collections of German tank crews.

It should be noted that it was thanks to F. Kurovski and his books that K. Knispel gained wide popularity. The historian clarified the nuances of the tanker's biography, described his combat path and also revealed indicators in battles. 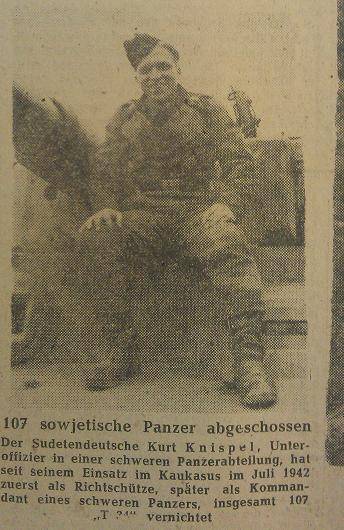 Non-commissioned officer Knispel on the pages of Völkischer Beobachter - Nr 138 17.05.1944
The future tanker was born on September 21, 1921 (or 1922) in the Sudetenland and was of German origin. In 1940, after the partition of Czechoslovakia, he went to serve in the German army and ended up in tank troops. From May to September 1940, K. Knispel underwent training, during which he got acquainted with the tanks Pz.Kpfw.I, Pz.Kpfw.II and Pz.Kpfw.III. In October, the young tanker was transferred to the 29th Tank Regiment of the 12th Panzer Division, where he had to master the specialties of the gunner and loading tank Pz.Kpfw.IV.

22 June 1941 g. 12-I Panzer Division took part in the attack on the USSR. At this time, K. Knispel was loading one of her tanks. The division fought in Western Belarus, in the region of Minsk and Smolensk. In late summer, she was transferred to Leningrad to participate in blocking the city. The tanker went all this way with his formation.

In January 1942, Mr. K. Knispel changed his profession and became a gunner. In May, his battalion was recalled to the rear to move to a new material unit - tanks Pz.Kpfw.IV. Soon the battalion was transferred to the 4-th tank regiment of the 13-th tank division, in which he had to participate in the attack on the Caucasus.

At the beginning of 1943, Mr. K. Knispel was sent to study work on the latest tank Pz.Kpfw.VI. After training, he ended up in the 1 company of the 503 heavy tank battalion. In the summer, the unit took part in the Battle of Kursk. Then there was a retreat through the territory of Ukraine.

From May to June of the 1944, the 1-th company of the 503-th battalion was retrained for heavy tanks Pz.Kpfw. VI Ausf.B. Soon after, the battalion was sent to Normandy, where in a few weeks he lost the entire materiel. At the end of September, combat readiness was restored and went to Hungary. During this period, K. Knispel became a tank commander.

28 April 1945 near Vostits (Czechoslovakia) sergeant major Knispel last went into battle. During the battle, a heavy tank was shot down by self-propelled artillery fire of the Red Army. The crew left the car and tried to retreat. A fragment of a Soviet mine inflicted a mortal wound on a tank ace.

According to F. Kurovski, K. Knispel won his first victory at the end of August 1941 near Leningrad. Then he was a member of the crew of sergeant-major Hans Fendezak and temporarily served as a gunner. During these battles, the tank knocked out 7 Red Army vehicles. In the future, K. Knispel returned to the place of the loader and for several months the combat score did not change. 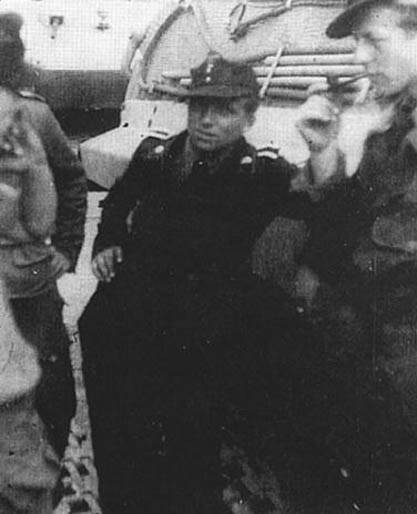 Knizpel and colleagues against the background of the Tiger II tank. Photo Forum.axishistory.com
Since January 1942, Mr. K. Knispel served in the crew of Non-Commissioned Officer Alfred Rubbel. Soon, he officially became a gunner, and during an attack on the Caucasus he knocked out five more tanks.

After retraining for Tiger, Lance Corporal Knispel was on the crew of sergeant Ripple. According to the results of the Battle of Kursk, tankers declared 27 victories. Soon new applications appeared, and the combat score was constantly increasing.

In May 1944, Mr. Völkischer Beobachter wrote about an outstanding tanker Knyspel who knocked out 107 enemy tanks. In the coming months, before transferring to a command post, the account was able to bring to 126 confirmed and 20 unconfirmed tanks. Then K. Knispel received a promotion and became a tank commander. On the Tiger and Tiger II machines, as a commander, he won 42 victories, not counting 10 unconfirmed.

One of the tanks of the 503 th heavy tank battalion. Summer 1944, France. Photo History.wikireading.ru
K. Knispel destroyed the last target in the battle of April 28, immediately before his death. The total official score is 168 tanks. Another 30 victories remained unconfirmed. Such data allowed F. Kurovsky and other historians to call Kurt Knispel the most effective tank ace of Germany and the entire Second World War.

The Felkisher Beobacher and F. Kurovski data on 168 confirmed victories raise big questions. It is possible to call into question both the number itself and the method of obtaining it. A careful study of the topic remains a lot of questions, the answers to which ruin the whole harmonious picture.

First of all, you need to touch on the base numbers. It is alleged that K. Knispel knocked out 168 (+ 30) enemy tanks. However, it is well known how tank crews' combat scores could differ from actual results. A number of objective factors make it difficult to evaluate the work of tankers during or after a battle. In addition, the specific attitude of the German command to the confirmation of victories was of great importance. As a result, often the battle accounts of aces are significantly overestimated and do not coincide with the real losses of the enemy. 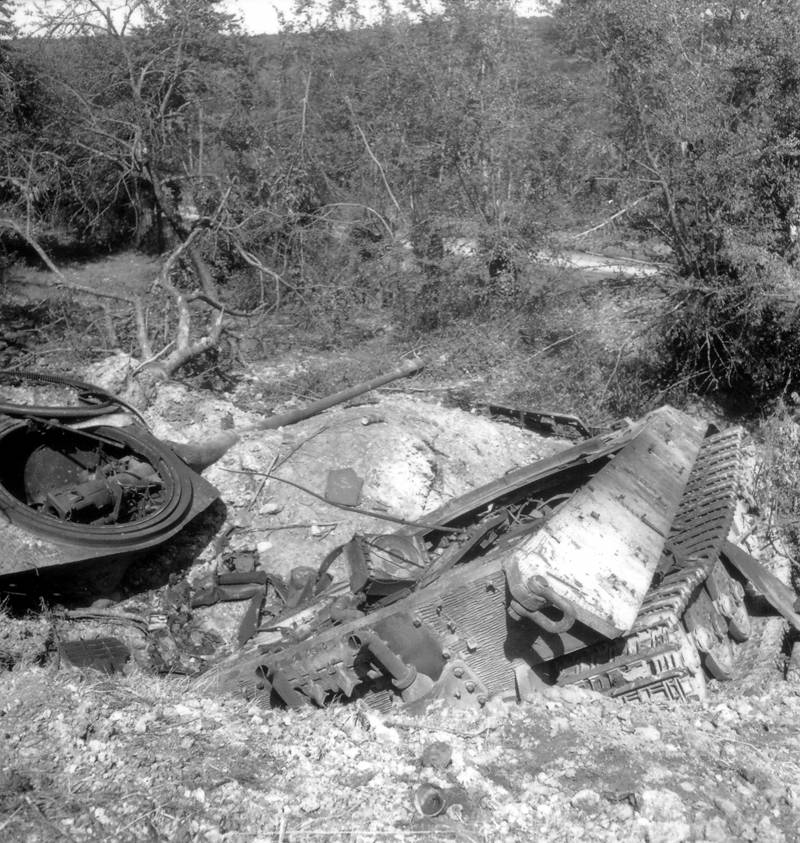 Another Tiger II after the battles in Normandy, 22 on August 1944. Photo by Wikimedia Commons
Thus, the number “168” refers not so much to the actual results of the tankers as to the bureaucratic features of their service. What should be a real account - an unanswered question.

The method of counting victories used by F. Kurovski looks extremely strange. In his book Tank Aces of the Second World War, Russian historian MB Baryatinsky rightly notes that when calculating victories, emphasis was placed on the personality of K. Knispel, and this led to incorrect results.

When determining the success of tankers, it is customary to single out a crew commander, under whose leadership victories are gained. In this case, from 168 declared victories, tank commander K. Knispel only has 42 left. He knocked out other 126 tanks, being a gunner in the crew of various commanders. This means that when calculating according to the generally accepted methodology, the total score should be divided between several commanders, and Knispel accounts for only a quarter of the declared victories. 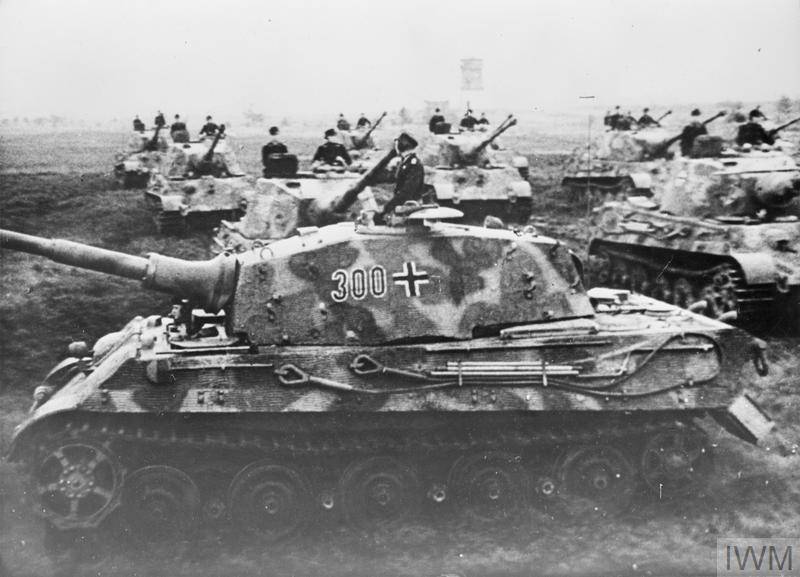 503-th heavy tank battalion in Normandy, 1 September 1944 Photo Imperial War Museum / iwm.org.uk
Due to incorrect counting, a characteristic situation is created. K. Knispel with "his" 42 wrecked tanks can not count on the title of the most productive tank ace of the Second World War. Even in German aces ratings, he will not be able to rise above 45-50 places. At the same time, the former loader and gunner “overshadowed” his commanders, who are now known only because of the service with him.

It should be noted that K. Knispel’s well-known biographies regularly raise the topic of lack of awards: they should regularly celebrate such a well-deserved tanker. However, a review of the known data on the adopted techniques shows what could be due to insufficient command attention. Iron crosses of the 2 and 1 class, as well as the Military Order of the German Cross, are quite consistent with the achievements in various positions in the crew of tanks.

Not the best and not the worst

To date, quite a lot is known about the sergeant-major Kurt Knispele. Based on the available data, they consider that he was the best tank ace of the Second World War. However, the same information allows to doubt this version and offers a more balanced picture. 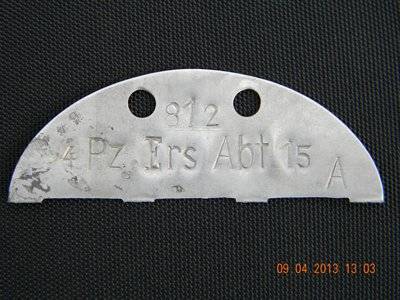 Token K. Knispel found in a mass grave. Photo Kurt-knispel.webnode.cz
Apparently, K. Knispel was really a good gunner and tank commander, capable of professionally performing his work. And the crews with his participation or under his command really caused noticeable damage to the Red Army. Moreover, K. Knispel was a dangerous enemy for us almost throughout the entire Great Patriotic War - until the end of April 1945.

However, restoring pages stories and when searching for unknown participants in World War II, one should not stoop to dubious methods of calculation - even if they give the desired result. Such cases cast doubt on the value of research. In addition, they interfere with the restoration of a complete and real picture of past events. Finally, they leave uncomfortable questions: who needs Axis to have new “heroes” many years after the end of the war - all the more so, with “merit” that is doubtful in all respects?

Ctrl Enter
Noticed oshЫbku Highlight text and press. Ctrl + Enter
We are
Iron fist of the Red Army. Motorized and tank divisionsArmored vehicles of Germany in the Second World War. Part of 2. The evolution of the organizational forms, the composition of the Wehrmacht Panzervawe and the SS troops
149 comments
Information
Dear reader, to leave comments on the publication, you must to register.