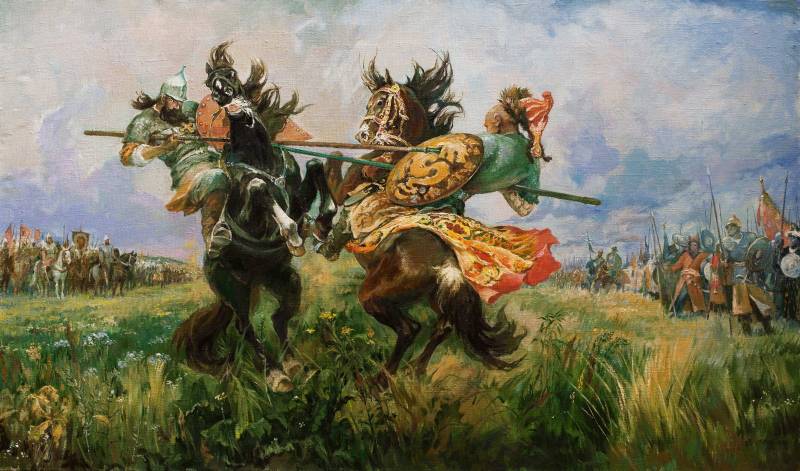 Russian warriors of past centuries could use different weapon. However, for centuries, the main weapon of the infantry was a spear. Such weapons constantly evolved due to changes in various design features, which allowed him to more fully meet current requirements. The evolution of the spear led to the emergence of several of its special variants of particular interest. 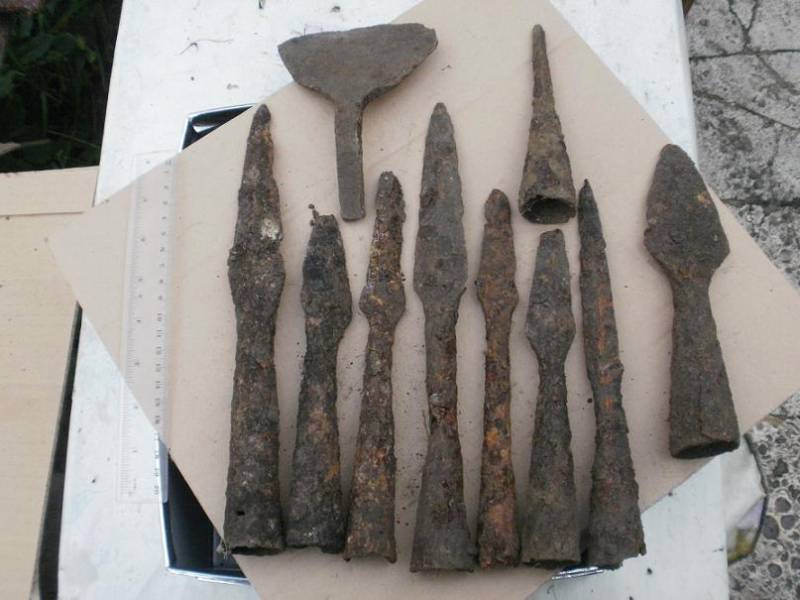 Tips of copies of the 11th-13th centuries Photo Swordmaster.org

It is known that in the Middle Ages and later the development of weapons in Russia was a constant and continuous process. New weapons designs appeared regularly, including poles, which were then distributed and gave the soldiers an advantage over the enemies.

For obvious reasons, most of the spears and other weapons perished without a trace, but surviving samples help archaeologists and historians restore the overall picture and its individual elements. History spears in Russia are constantly supplemented with new details, but the general ways of its development have long been identified and well studied. There is also a classification of copy tips used in different periods.

For example, in A.N. Kirpichnikov's "Old Russian weapons" famous spearheads are divided into seven types with several subtypes. One type includes weapons with a similar design and shape, and subtypes depend mainly on the size of the product. Separation by periods was also applied, which made it possible to classify finds from the 9th to the 13th centuries in the classification. 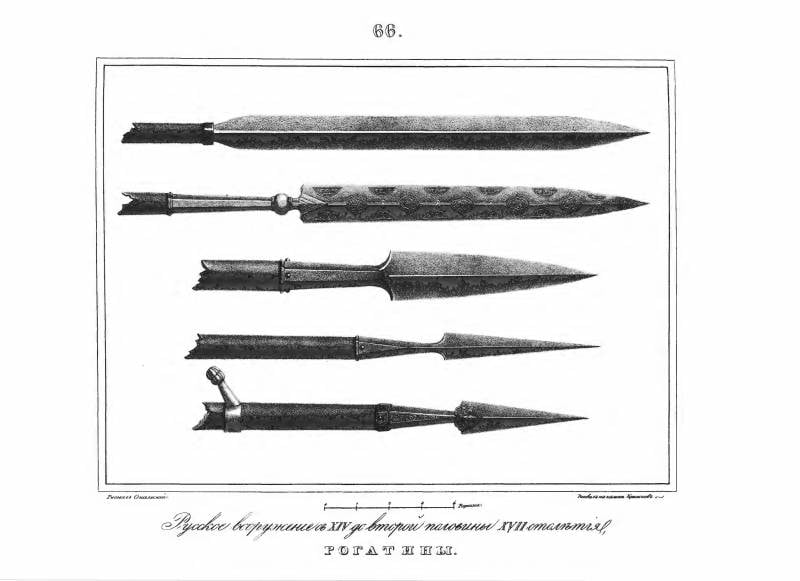 Different options for stag meat. Illustration from the book "Historical Description of Clothing and Arms of the Russian Forces"
Some types of tips differ markedly from other representatives of the classification, which may be of great interest. In addition, in the history of the Russian spear there are some controversial points that should also be considered.

Perhaps the most famous spear variety in Russia is the stag. The first references in sources and archaeological finds of this kind date back to the middle of the 12th century. Later, staghorn became widespread in the infantry and cavalry, and also became a hunting weapon. In the last role, she continued to be used almost until the beginning of the last century.

At its core, staghorn was an enlarged, reinforced and weighted spear. It was made on the basis of a strong pole of greater thickness with a length comparable to human growth. The feather of such a spear most often had a laurel-shaped form; tip length could reach 500-600 mm. There were also special requirements for the strength of the sleeve. The finished product was noticeably larger than other copies, and also several times heavier.

Due to the reinforced design, the catfish could deliver more powerful stabbing and chopping blows. Such weapons were distinguished by greater penetrating power, due to which they could be used both against infantry and in the fight against cavalry. The Russian army began to use hornets almost immediately after their appearance - in the 12th century. The share of such weapons in the total number of copies was constantly changing, but was always quite large. The last mention of the use of rogatins in the army dates back to the 17th century. Further development of promising weapons has reduced the role of spears. 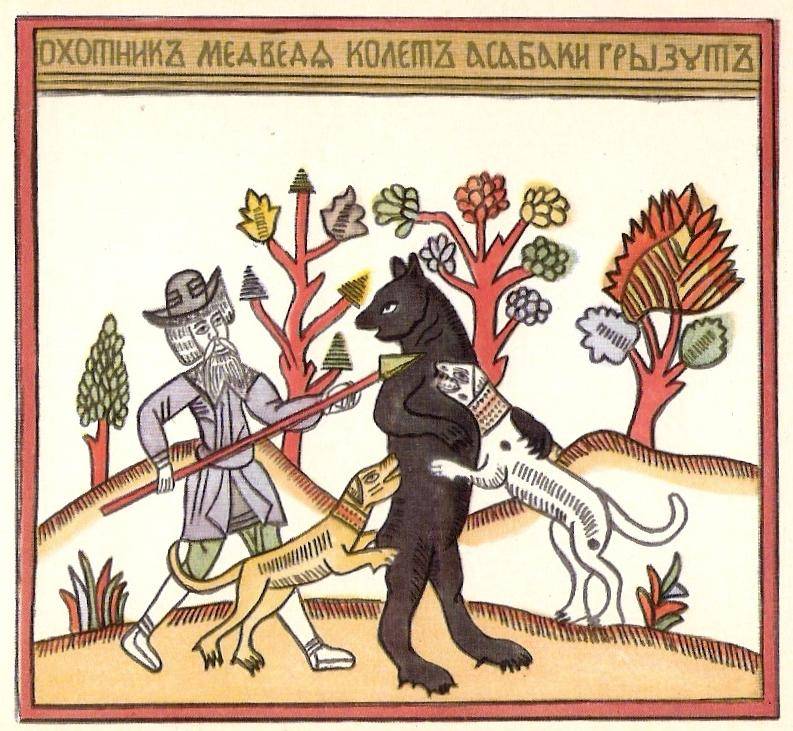 A textbook lubok depicting a hunting use of a stag. Wikimedia commons
Special characteristics allowed the use of stag and hunting. Such a "career" of reinforced spears lasted much longer. Rogatins were used when hunting large and dangerous animals - the use of such weapons against bears is best known. Some hunting slings were distinguished by the presence of a characteristic crossbar near the feather. This part served as a kind of stopper and allowed the hunter to keep the affected prey at a safe distance.

Between a spear and an arrow

In the past, throwing darts were very common. In Russia, such weapons were called Sulitsa. It was a throwing spear of small size and limited mass. In fact, it was larger than a bow arrow, but smaller than a normal spear. The first samples of this kind date back to the 9th century. Sulitsy was used by all Slavic tribes, and then entered into service with the military and squads. The development of such weapons as a whole repeated the evolution of the spears, although with some differences.

Outwardly and in construction, the groom looked like a spear, but was smaller and lighter. The length of the shaft usually did not exceed 1,5 m, and the tip was not longer than 200 mm. To simplify the design and save the tip, they could equip the tip not with a sleeve, but with a stalk driven into the shaft.

Small and light as well as larger and heavier samples are known. The difference in mass led to some differences in combat qualities. Like spears, sulits received tips with feathers of various shapes. Mostly elongated types were used, capable of showing the best punching effect when throwing.

Modern reconstruction of the tip of the sulitsa. Photo Dic.academic.ru
The main way to use the Sulits was throwing at the enemy. Depending on the mass and speed, such a weapon could break through the enemy’s light defense, or at least get stuck in it. The infantryman could carry several gangs and some other weapon, which expanded his combat capabilities. The use of the witch as a spear was not excluded, but its effectiveness was limited by objective factors.

The period of relatively active use of propelling pole arms fell on the X-XIII centuries. In the future, a change in battle tactics and the emergence of new types of weapons led to a reduction in the use of streets. They later went out of use.

In 1841, the publication of the multi-volume work of A.V. Viskovatova "Historical description of clothing and weapons of the Russian troops." In this work, all known data on the weapons of the Russian armies were collected, but there was also some new information. One of the mentioned examples of pole arms caused controversy.

In the first part of the book, among the armaments of the infantry and cavalry, a soviet was mentioned. This weapon was defined as the likeness of a horn with a tip in the form of a large knife with one-sided sharpening. The book also had two drawings - one depicted the actual piece of iron, and the second was attended by a horseman with such weapons. 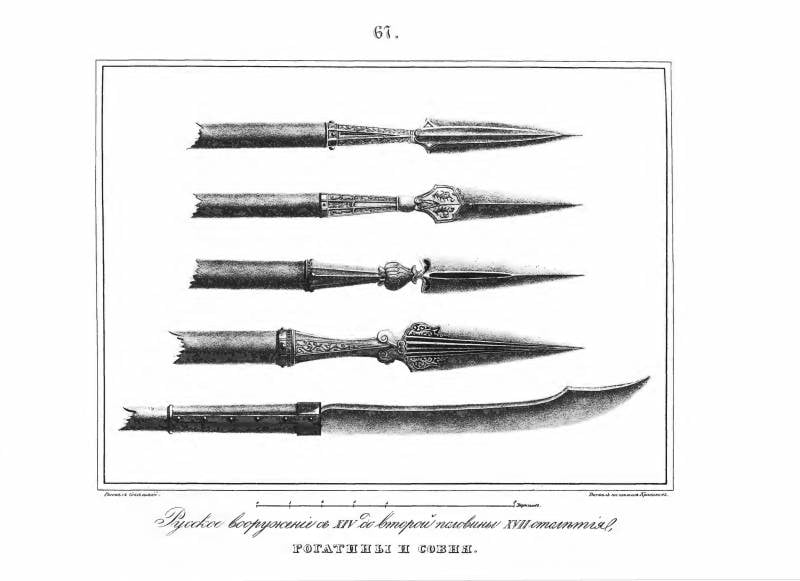 The first known image of a spear of the "owl" type (below). Illustration from the book "Historical Description of Clothing and Arms of the Russian Forces"
It was further established that the term “owl” had not previously been applied to any real weapon. Something similar was found only in one of the lists of the Novgorod Chronicle I, but even in this case there was no complete certainty. The fact is that this fragment of the document is inaudible, and in other lists in this context other weapons appear.

Over the past century and a half, the history of Russian pole arms has been seriously supplemented and comprehensively studied. Despite this, any traces of the sovni described by A.V. Viskovatov, still not found. However, the name “owl” or “owl” has come into circulation and has been actively used to this day.

Different domestic museums store differing archaeological finds called sovnies. Moreover, to this day it is unclear what kind of real weapon the author of the “Historical Description” had in mind. The version about the mistake made is very popular. However, so far not all questions in the context of the Soviets have answers, and disputes continue.

The development of copies in Russia continued for several centuries and led to very interesting results. In different periods, on the basis of the "ordinary" spear, various specialized specimens appeared with one or another feature. Nevertheless, one of the main weapons of the infantry and cavalry was still a spear in its original form - with one or another type of tip. 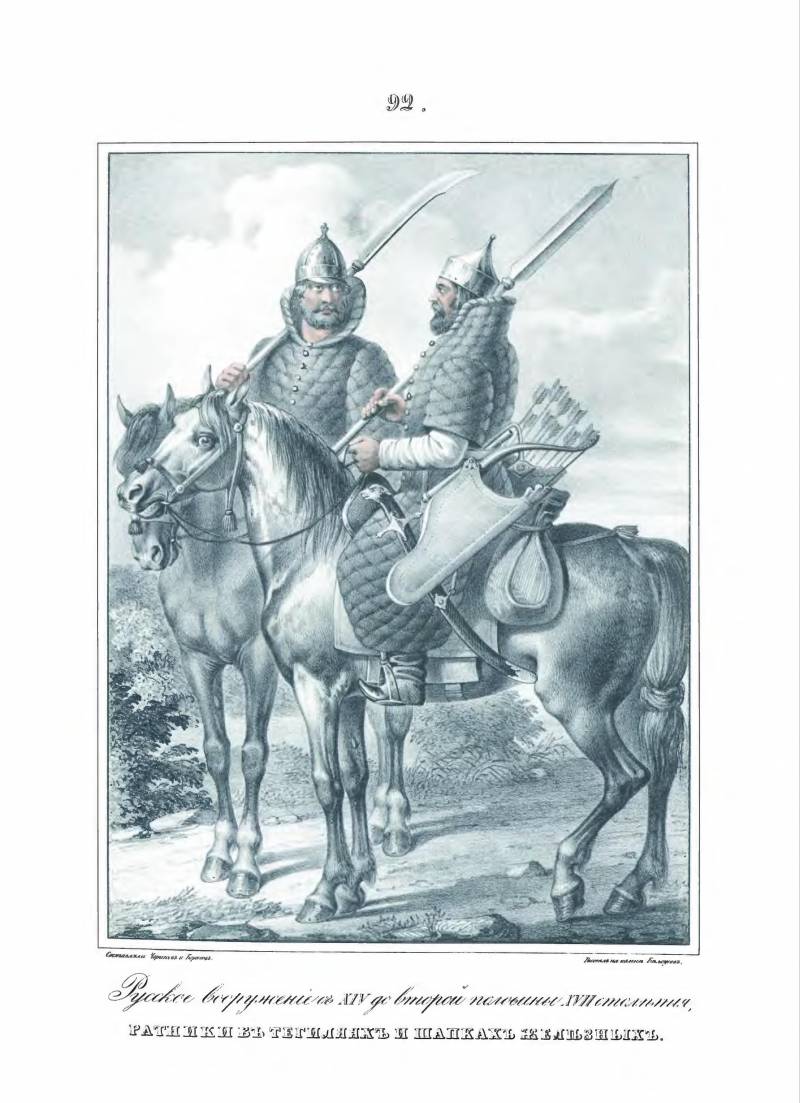 Horsemen with pole arms. The fighter on the left has a owl. Illustration from the book "Historical Description of Clothing and Arms of the Russian Forces"
The reasons for this are understandable. Spears of the main types, despite the development and change of design, were a simple, convenient and versatile weapon for the infantryman or rider. Other samples, such as stag beetle or sturgeon, were designed to solve specific problems and therefore should only complement the main weapon. However, this role did not adversely affect their distribution. All known varieties of copies were actively used and refined.

Over time, pole arms have lost their value to armies. However, some of its varieties were still interesting for hunters. Of all the specialized varieties of the spear, the longest part of the exploitation was the stag, the features of which were useful not only on the battlefield. But she, in the end, could not compete with a newer and more advanced weapon, using different principles.

Ctrl Enter
Noticed oshЫbku Highlight text and press. Ctrl + Enter
We are
Spears of Joseph A. Rony the Elder and Gene M. Auell (part 2)Old Russian spears. In battle and hunting
36 comments
Information
Dear reader, to leave comments on the publication, you must to register.