The beginning of the legendary Crimean storm 1854 of the year 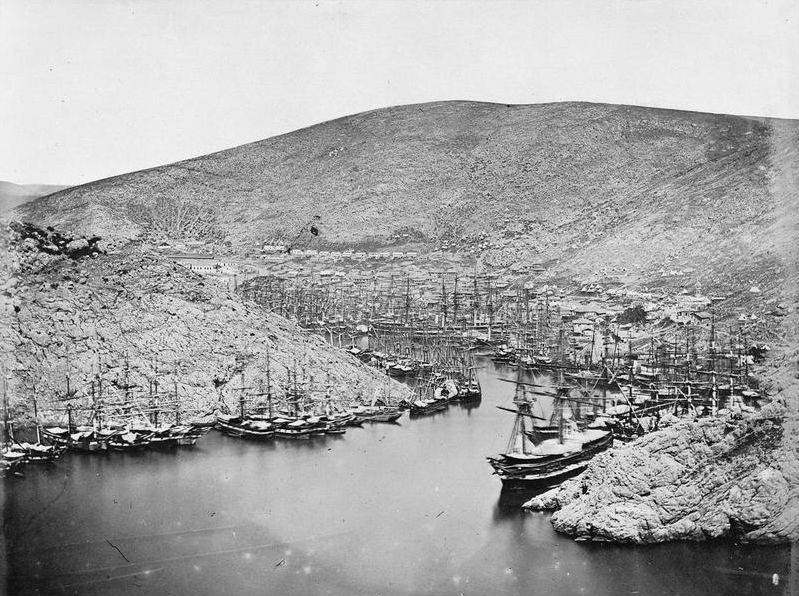 One of the first names of the Black Sea is the Pontus of Euxinus, i.e. the sea is inhospitable. And the sea got such a harsh name not only because of the warlike tribes inhabiting the coast. The Black Sea, the bluest in the world, is quite changeable and sometimes unpredictable. There are still legends among sailors about wandering Black Sea killer waves. Of course, all this is said with mocking skepticism, but a certain restraint is felt behind it. Besides, how do you know in the darkness of the storm if a flock of Harpies, daughters of the mighty god Borey, will fly out from under the keel? After all, the elements of the Black Sea periodically make a man reverence for his power. One of such days was November 14 of the 1854 year, i.e. in the midst of a bloody Crimean war.

November 1854 of the year. Russian troops are desperately defending Sevastopol, making attempts to unlock the fortified city. Anglo-French troops managed to capture Balaclava. In the Balaklava Bay there were foreign ships - both military and chartered civilian transport ships.

Already in the tenth of November, the sailors of the occupying forces began to feel unkind in an unfamiliar climate and the nature of the alien sea. Traveler George Taylor, located on the flagship battleship of the Mediterranean fleet Britain’s Agamemnon (a 70-meter 91-gun sail-screw ship of the line with a displacement of 4614 tons and a crew of 860 people), wrote in his diary:
"Strong wind. Since the parking lot in Balaklava Bay became unsafe due to the tightness and strength of the wind, Agamemnon stepped out of it and anchored in Kamyshovaya Bay, in full view of the city, Sevastopol Bay, the Russian fleet and our batteries. A lot of transports and steamboats remained in Balaklava Bay, some already had anchors crawling. ” 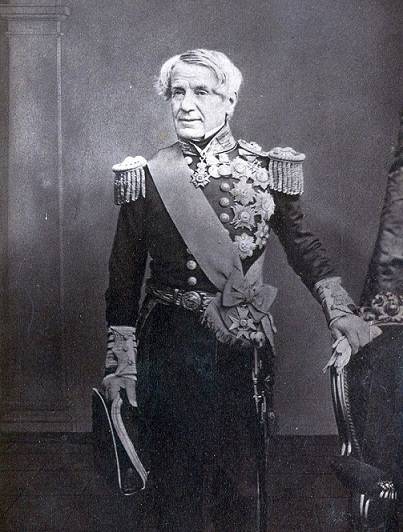 Rear Admiral Edmund Lyons
It is worth pointing out that Rear Admiral Edmund Lyons, holding his flag on the Agamemnon, already on November 13, having sensed something was wrong in the sea, removed the flagship from the anchor and went into the open sea, leading some of the battleships behind him. For what reason, this prudent and far-sighted old sea wolf (it had already exceeded 60 years at that time) did not insist on the departure of all ships from the coast, it is still an ambiguous question. Perhaps this is a consequence of the diversity of ships and ships off the Crimean coast, it may be a matter of jurisdiction, but in the end very soon the captains on the coast will have to bitterly regret that they did not leave behind the admiral.

Another witness to the disaster was Isabella Duberley, the wife of the treasurer of the 8 Irish Royal Hussar Regiment, Captain Henry Duberley, who was then aboard the Star of the South ship:
“A strong hurricane wind carried such terrible excitement in the crew of the ships, standing both inside and outside the bay, that some owners of the latter began to protest that they were not allowed to take refuge in the bay. A terrible hurricane began at about five in the morning. At seven o’clock, when I looked out the window of the cabin, the bay literally boiled and was covered with foam, the ships rocked terribly. ”

In fact, Captain Dakres, who was at that time managing the port of Balaclava, stopped letting ships into the bay, because The water area was clogged with warships and vehicles so much that they already threatened themselves with severe sea swell. Their masts literally piled on top of each other, threatening to collapse. Thus, in the open sea a fairly large number of ships accumulated, both sailing and steam. 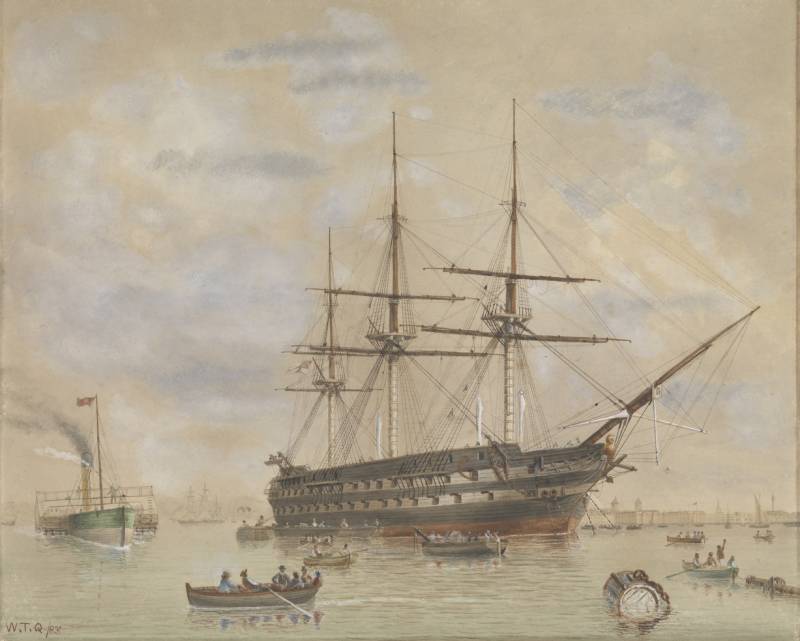 "Agamemnon"
On the night of 13 on 14 on November 1854, a heavy rain fell on the Crimean coast from Yevpatoriya to Foros. Soon, the icy wind began to grow stronger, and the temperature dropped rapidly. After some time, the rain gave way to a wild blizzard, as if a deep winter had descended on the peninsula. By morning, it cleared up a bit, and even the hope appeared that the elements had subsided. But the strength of the wind continued to grow, turning into a real hurricane. The monstrous wind easily lifted roofs from houses and broke trees, like reeds. And that was just the beginning. Later, eyewitnesses testified that at some point the roar, groan and whistle of the elements merged into one common monstrous howl.

And here is how an element was described by an eyewitness who observed the element directly from the shore:
“The air was literally filled with blankets, caps, overcoats, frock coats and even tables and chairs ... The roof from Raglan’s house (Field Marshal Fitzroy James Henry Somerset, Baron Raglan) was torn down and spread out on the ground. The barns and the commissariat sheds were completely destroyed and flattened ... The large carts that were not far from us were overturned, and the people and horses, knocked down, rolled helplessly on the ground. A large flock of rams rushed along the road to Sevastopol and completely died under the blows of a tornado, which tore from the ground and scattered whole rows of beautiful high poplars, sheltering the Balaklava gorge that was cherishing them. ”

Ships in the hands of an angry sea 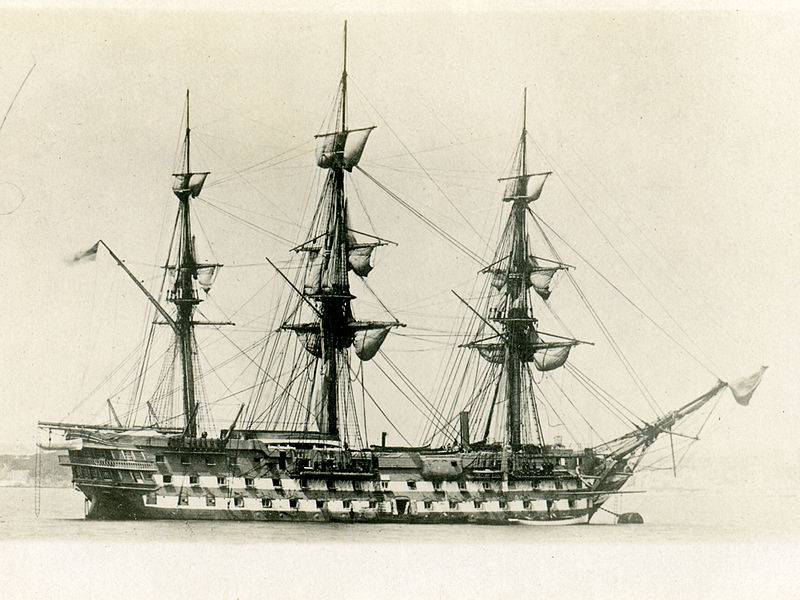 Hms london
Separately, it is worth noting the English transport "Prince". It was the newest British sail-screw ship, put into operation only in the 1854 year. The ship’s two-cylinder steam engine produced 300 hp. power. This transport in the Crimean War was engaged in the supply of troops, transporting ammunition, equipment, medicines and more. He will later enter history like the legendary "Black Prince", the one that will excite the imagination of treasure seekers. This ship covered with legends will even become the subject of research by Epron specialists. But this is a different story ...

In general, it is necessary to understand that almost all Western countries attacked Crimea. Here, for example, wrote an American businessman who found a real gold mine in the war, George Francis Train, who was in the camp of the French troops in the 50 of the 19 century:
“I counted about five hundred vessels under the flags of almost all the Western powers ... Nearby stood three excellent creations of northern shipyards; the French tricolor was raised on their mizzen masts, but our star-striped banner fluttered on the main masts. Overshadowed by its restrained grandeur, the proud 100-gun “Naroleon III” of the French and the mighty “Agamemnon” of the English, our “Great Republic” seemed to be the real flagship of the Allied fleet. The “Great Republic” of Captain Lymbürner, “Queen of Clippers” of Captain Zereg and “Monarch of the Sea” of Captain Gardner were moored in the neighborhood; "I had never before felt such pride in my homeland, as at the sight of these magnificent clippers from New York." 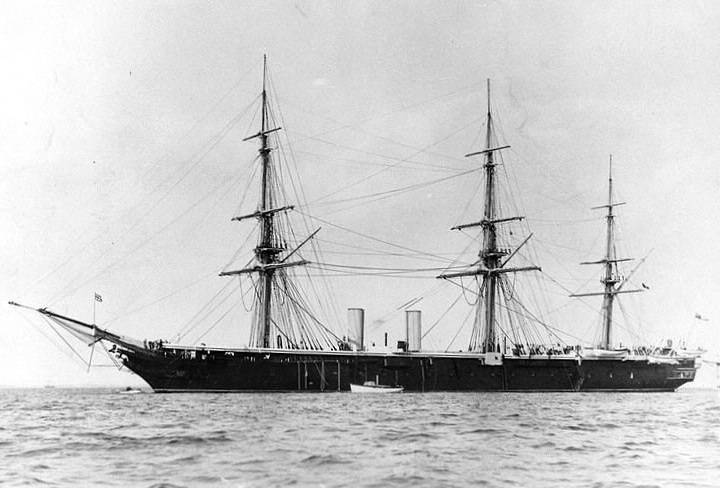 The situation is no better in the region of Evpatoria. The English ship Cyclops and the frigate Culloden, the French sailing frigate Fultan and the 100 gun ship Henri IV, as well as the Turkish ship Peiri Messeret, became hostages to the elements, having no way to find shelter.

All of these ships were trapped in wayward weather. At that moment, when it became clear that it was no longer possible to find shelter in the Crimean bays, the Anglo-French squadron decided to go to sea - to try their luck away from the harsh rocks. But they realized it was too late. On the afternoon of November 14, the wind, which turned into a real hurricane, no longer allowed sailing and sailing-sailing ships to reach the open sea. True, it is worth pointing out that, nevertheless, one steamboat was able to overcome the wind and wave and leave for the sea.

However, on the same Crimean coasts a steam engine in some cases became a salvation, and in others it was an indirect culprit of the death of the ship. The captains of most steamboats nourished an extremely dangerous and largely exaggerated hope for the power of the steam engine, so they decided not to compete with the waves in the open sea, but to exert all the forces of technology to stay on the shore. 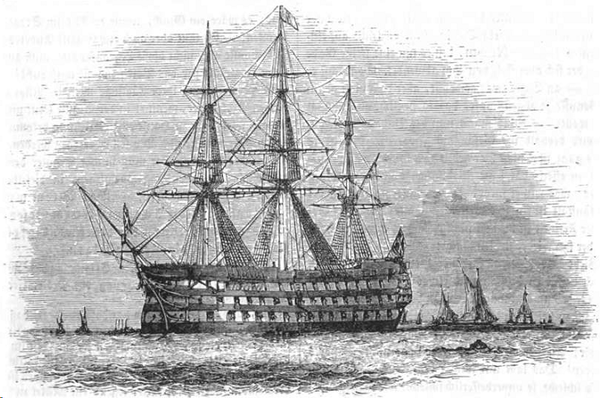 "Trafalgar"
One of the officers who survived during the 1854 element of the year and was directly on the ship during these events, later recalled:
“Sailors exposed to dangers on all seas do not remember that they had to witness such a storm. Imagine a terrible wind threatening to overturn the mountains; streams of rain flooding the atmosphere; "a frequent hail, with fierceness striking at everything that it encounters on the way, and, finally, an agitated sea, the ramparts of which are equal to the mountains, and you will not yet have a complete concept of a terrible hurricane.


The outcome will have a tremendous impact on the course of hostilities. Sinking ships will be dragged to the bottom not only of sailors, but also of their cargo.