Flame rearguard battle. The final of the Lyubachev battles 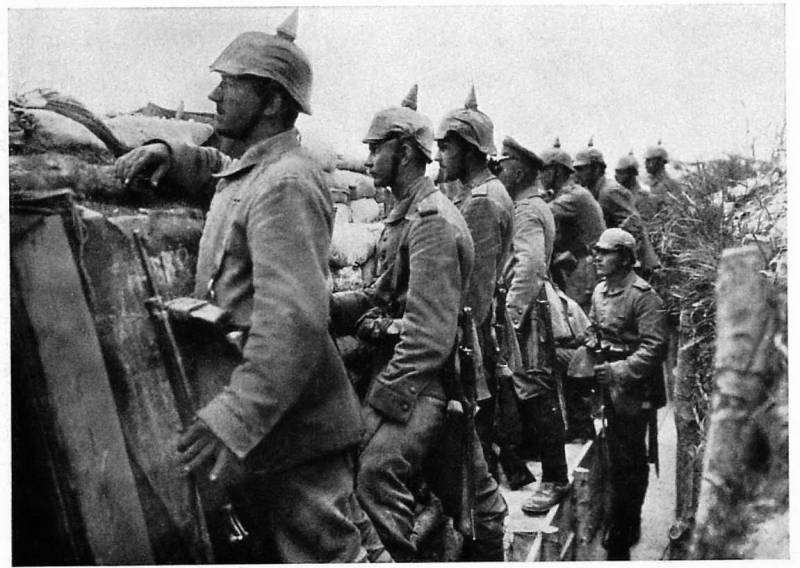 In the fire of rearguard battles

By the morning of the 3 June, the group of V.A. Olokhov took the following positions: 29 Army Corps - Dzikuv Novy - Futory, 2 Army Caucasian - Futory - Tower, units of the 4 Horse Corps covered the infantry withdrawal. So, the already mentioned 8-th Don Cossack battery: “On the 3 of June in the battle near the village of Dobrovo ... under strong rifle and machine-gun fire, becoming openly, intensely fired at the enemy’s dense advancing chains, forced them to stop the attack with their fire and acting, on the flank, inflicting tremendous damage on him, which made him almost cease fire on our retreating infantry, which freely and moved to Dokhnov’s position. ” And the 20-th Don Cossack Regiment: "... stubbornly delayed the advance of the enemy north of the foli. Latoshiki, having in the battle line all hundreds. At this time, the infantry, putting itself in order, calmly began to retreat. "

From a tactical point of view, these battles are of particular interest - as a rule, the Russian infantry defended steadily, but the problem of the neighbors or the leveling of the front forced the unit to begin to withdraw. The “victorious” Germans made tactical mistakes, often acted indecisively and ineptly, but due to the general operational situation and due to overwhelming superiority in material and technical support, they moved forward.

Illustrative in this sense is the following battle of one of the regiments of the 51-th Infantry Division of the 2-th Caucasian Army Corps. The front-line soldier left interesting recollections about the battle of the 202-th Infantry Gori Regiment on the 3-th June near the village of Balai. The 2-th Caucasian Corps moved to the city of Lyubachev, taking up positions east of the latter. The regiment occupied the edge of the forest near the village of Balai on the sides of the railway track - and repulsed a series of attacks by the Germans.

Around noon, enemy infantry chains attacked the combat sites of the 1 and 3 battalions. Artillery foe significantly increased. The battalions withstood the onslaught of the enemy’s thick chains - operating under a hail of heavy and incendiary shells (the village caught fire and the trees fell from explosions of high-explosive shells). Using the fire, they hit before the 3-x German battalions, but in 800-1000 steps from the edge of the forest they were met by such a strong rifle-machine gun fire of the 1, 3-th battalions and parts of the companies of the 4-th battalion that they could not stand and surrendered . Russian light and howitzer batteries with well-aimed and concentrated fire struck the supports and rear chains - as a result, all the attackers fled in disorder, leaving many dead and wounded. The Gorians shot the remaining and fleeing Germans.

Around 13 hours, Russian gunners successfully fired at the German infantry, which had again accumulated at the Lyubachevsky barracks and in the hollow. By the 15 watch, the artillery fire of the Germans became as powerful as possible, with heavy caliber mainly operating. And the German infantry again launched an offensive - with larger forces. The advancing chains were no longer supported by snakes, but by thick columns. The sections of the 1 and 4 battalions were hit. Despite heavy losses from rifle-artillery fire, the Germans were moving almost non-stop forward, with their advanced chains already occupying the heights at the railway booth (500 - 600 steps from the edge of the forest). Russian gunners and machine gunners concentrated maximum fire in the area. Under this fire, the Germans, who were on the south side of the railway, began to withdraw, but under well-aimed machine-gun fire they were forced to lay down. New columns of Germans appeared from Lyubachev, trying to move forward - but the strongest artillery and rifle fire produced devastation in their ranks. The Russian howitzer battery carried the entire area, expelling even from behind the hillocks the support hiding there. And the Russian companies and machine guns sheltered in the bushes with destructive fire completed the rout of the enemy rushing in different directions. At the same time, light batteries were covered with shrapnel fire trying to approach the enemy columns. The attack was repelled. 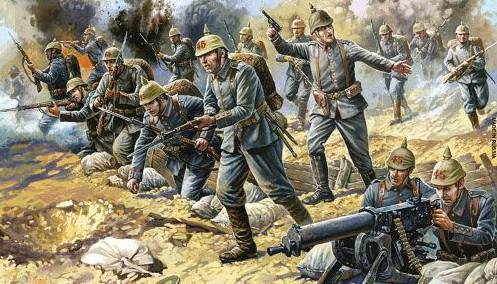 About 17 hours, after a hurricane fire on the 4 battalion of the Gorians and the Caucasian shooters, the Germans again launched an attack. They acted under the guise of artillery fire, as well as machine guns, processing the approaches to the 4 battalion. The Russians suffered greatly from artillery fire, but the German infantry who rushed to the attack were met by the fire of the 1 and 4 battalions, gunners and machine gunners - and began to scatter along the river, hiding in potholes. Russian gunners moved the fire to the approaches to the village of Mokritsy, attacked by German columns. Despite the well-aimed fire of the Russians, the strongly thinned German chains still managed to approach the Mokritsky trenches - while some Germans occupied the latter, the rest began to bypass the trenches from the south. The latter fell under the well-aimed fire of reserve companies and machine gunners of the 4 battalion - and were destroyed. Under the influence of this fire, the Germans could not stay in the trenches in front of the village of Mokritsy, running along the ditches.

Around 19 hours, artillery of opponents was actively operating: Russian artillery smashed the village. Mokritsy, and the German bombarded the Balaevsky forest. The regiment as a rearguard of the division received an order to withdraw. Losses in this battle are an officer and about 300 lower ranks.

The Germans did not pursue heavy losses. 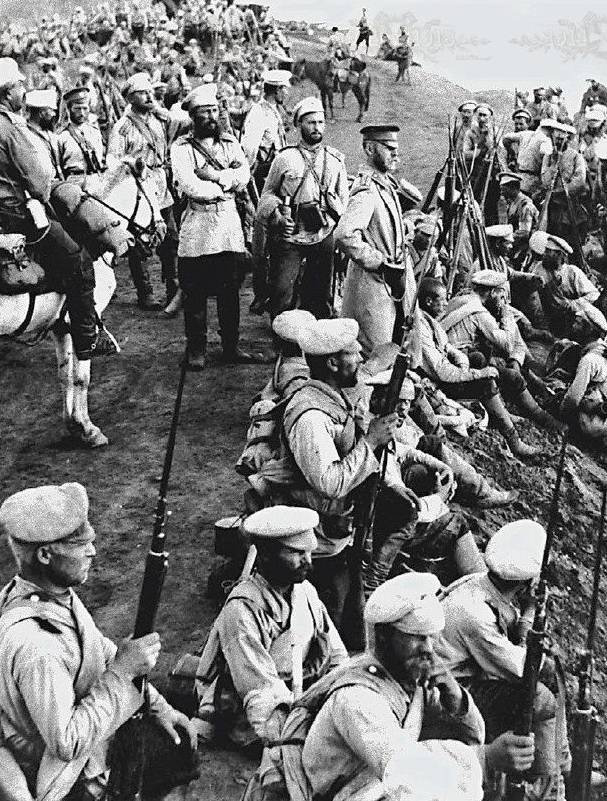 The Supreme Commander-in-Chief summed up the result of the defensive battles of 2 - on the 3 of June. The Headquarters report reported that the German attacks east of San continued, and the enemy, pushing the Russians away from Lyubachevka and San, developed the main efforts on the Lyubachev-Krakovets front. A. A. Brusilov, whose army was threatened with circumventing the right flank, ordered his operational association to withdraw to the Gorodok position - on the night of June 3. Losses are very large. The troops suffered most severely towards Lubachev, where only 51 bayonets remained in the 2400 division. On the 3 of June, the front was located at 15 km north of the original positions on the river. Lyubachevka, moreover, Mr. Lyubachev was still holding on. The army of A. A. Brusilov retreated to the Gorodok position without enemy pressure. 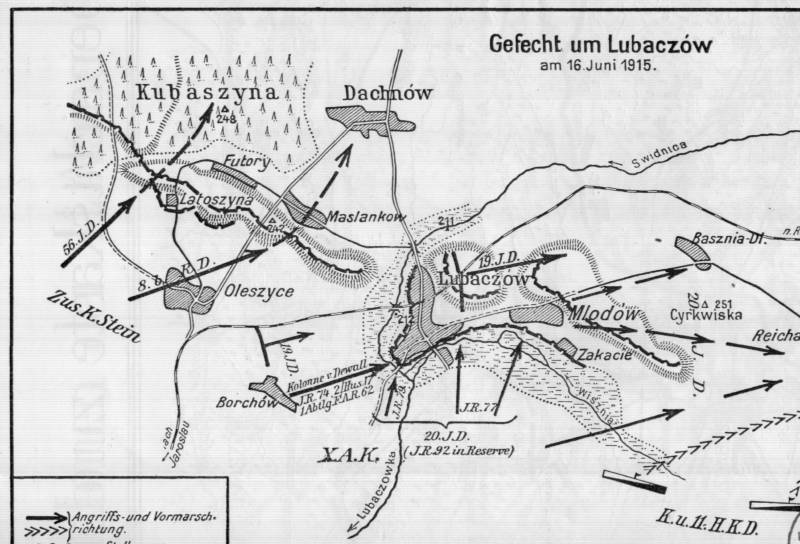 The final stage of Lubachev's defensive operation was the situation by the 3 of June (the 16 of June in a new style) of the 1915 of Der Grosse Krieg. Die Schlacht bei Grodek - Lemberg (Juni 1915). Oldenburg, 1918.
During the defensive battle of Lubachev, the Russian 3 army formations suffered heavy losses. So, in the 3-x divisions of the 24-th army corps there are about 5-thousand bayonets, in the 3-m Caucasian army corps 6 thousand-bayonets, in the 2-m Caucasian army corps 5,3 thousand-bayonets. Corps commanders and division heads reported extreme fatigue of the troops and very large losses.

As a result, on the night of June 4 the decision was made to withdraw the 3 Army from the river. Tanev. The army commander issued an operational order at 12 hours on June 3, in which, due to the departure of the 8 army to the Gorodok position, he ordered his corps to retreat to previously prepared new positions on the right bank of the river. Tanev, for which: 4) The 1 Corps continues to occupy its previous positions on the left bank of the river. San; 15) The 2 corps, remaining on the left bank of the Sana'a, should take a position from Burje to Przyszow Kameralny - Varholi - Borovitsy - Przedzel; 9) 3-th building passes to the right bank of the Sana'a and takes a position from the mouth of the river. Tanev up the river until the river flows into it. Lada; 14) 4-th building takes a position from the mouth of the river. Lada to the village Clay; 10) 5-th Caucasian Corps takes a position from the village. Clays before flowing into the river. Tanev r. Noise (opposite the village of Shostaki); 3) 6-th building takes a position from the mouth of the river. The noise to the village. Borovets; 24) General Olokhov’s group takes the line from the village. Borovets through Lublinets - Novi - Zhukov - Goraets to Brusno Nove; 7) army reserve - the brigade of the 8 division and the 61 consolidated Cossack division (the last after the task of covering the withdrawal of the 2 Caucasian corps) under the command of the head of the 3 consolidated Cossack division, Lieutenant General A. A. Pavlova is concentrated in Belgor ; 2) in the above positions should be defended to the extreme, gradually improving the fortifications and organizing dams on the river; dams - to make impassable or mine; 9) after the army withdraws to the above positions, the general task of the army and the task of the group of General Olokhov remain the same. The departure should have begun at 10 hours on the 22 of June. General Olokhov was ordered to pay particular attention to the connection of his left flank with the right flank of the 3 Army, and the comkors were instructed to conduct early reconnaissance of escape routes to sections of the position assigned to the corps, and to take measures to ensure that the connections followed the positions and took up positions in full order and without fuss.

The group of V.A. Olokhov retreated to the Borovets-Rudka front, while the 8th Army went to the Gorodok position, west of Lviv (along the Vereshchitsa River). Under the pressure of the enemy, the 8 Army on the night of the 7 June 1915 moved from Gorodokskaya to the Lvov position.

The corps of the 3 Army retreated to the positions indicated in the order beyond r. Tanev, and the group of V. A. Olokhov occupied the front of Dombruvka - Zhukov - Rudki with the 29 and 2 Caucasian army corps. 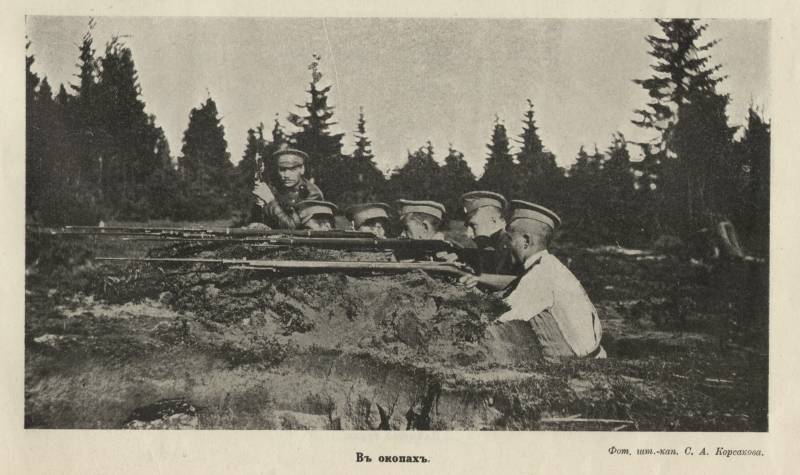 M. D. Bonch-Bruyevich wrote that the Russian 3 Army left Galicia in this way - with victorious losses, it passed victoriously in August 1914 from east to west.

During the battle, the enemy, acting at the junction of the 3 and 8 armies, forced the Southwestern Front to withdraw. The most dangerous moment of the operation was the enemy’s attempt to circumvent the left flank of the 3 Army. The Russian command, finally, begins to pay increased attention to the defense of army and front-line joints. It was to solve this problem that the army group of V. A. Olokhov was specially created. On the other hand, as Quartermaster General Stavki noted, infantry general Yu.N. Danilov, the choice of an area too close to the front to concentrate the Olokhov group led to the fact that on the 3 of June the troops of this group ended up in the battle line, thus losing the opportunity to implement any maneuver. The armies of the South-3western Front continued to "hopelessly lean back."

The troops of the Russian 3 Army were once again seriously affected. Being the main target of the enemy’s influence during the Gorlitsky operation, the 3 Army, due to the small number and heavy fatigue of people, was not able to solve large operational tasks. She could not carry out a full-fledged offensive operation with Lyubachev. During the defensive battle, it turned out that under the fire of powerful artillery of the enemy, with a lack of ammunition and in uncomfortable positions, she would not be able to hold on either. Despite all the negative factors, the Russian troops fought excellently, inflicting heavy losses on the enemy.