How to protect airbases from a swarm of drones. Lockheed Martin ATHENA Combat Laser System (USA) 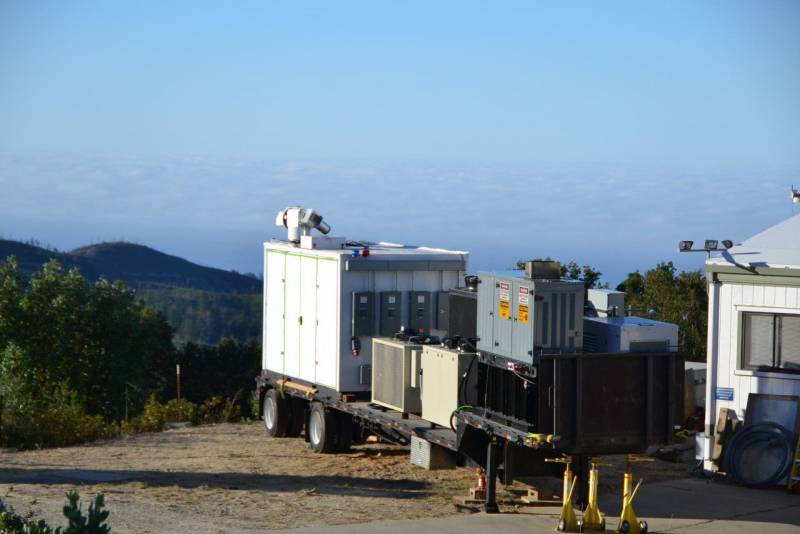 On November 7, another US military laser was tested at the Fort Sill training ground (Oklahoma state). Lockheed Martin's ATHENA (Advanced Test High Energy Asset) complex successfully completed the test task and hit several unmanned aircraft and helicopter-type targets. An important feature of the tests passed was the use of all the standard communication and control systems that ensure the integration of the combat laser in the general contours of the troops.

Lockheed Martin revealed the key features of the recent tests of its combat laser. The purpose of these events was not only to verify the emitter itself and its means in the fight against group goals, but also to test the entire combat complex, which includes various communication and control systems.

The ATHENA laser was placed at the training ground and connected using an unnamed type radar using standard communications equipment. The purpose of the radar was to monitor the air situation and provide data to the laser control panel. The ATHENA product, respectively, was responsible for tracking and defeating issued targets. Thus, a full-fledged laser defense system was actually deployed at the training ground. The complex was entrusted to the US Air Force.

Several unmanned target aircraft of aircraft and helicopter types entered the covered airspace sequentially and at short intervals. Light UAVs imitated enemy attacks. The radar of the tested complex detected all of these objects and issued data to the command post. 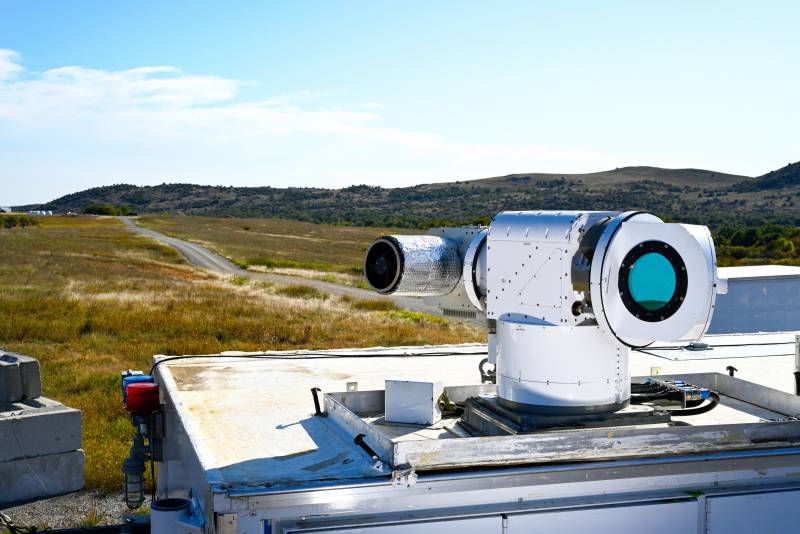 After that, the ATHENA battle laser sequentially hit all detected targets. The system carried out a turn of the emitter, aimed it at an air object and detained a beam on it. After a few seconds of such a “backlight”, the target structure was destroyed. Immediately after that, there was a retargeting to the new target.

It is alleged that all UAVs of two types were successfully affected. Past tests have confirmed the ability of the ATHENA combat laser to operate as part of a full-fledged air defense system and solve the tasks of intercepting unmanned aerial vehicles. The ability to destroy a large number of targets in minimal time was also shown.

Features of the complex

The tests involved an experienced ATHENA laser of characteristic architecture. Part of the equipment was mounted on several trailers. On the roof of one of the containers guidance systems, a radiator and optical-electronic devices for searching for targets are placed. In the future, it is possible to rebuild the complex with a view to placing it on various chassis, on stationary objects, etc.

The basis of the ATHENA complex is the 30 kilowatt laser ALADIN (Accelerated Laser Demonstration Initiative). The ALADIN product includes three 10 kW fiber optic lasers. Using optical systems, the radiation of three lasers is combined into a beam of the required power directed to the target.

An emitter of this design is mounted on a swinging part and on a swivel base. Together with it, an optical unit is mounted on vertical aiming drives for monitoring, searching and tracking targets. 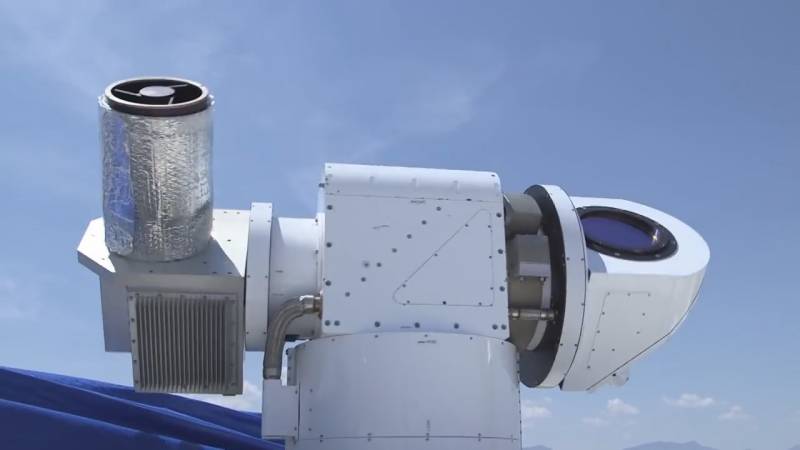 The main feature of the ATHENA complex is the design of the ALADIN laser. It includes three separate lasers, which leads to certain advantages over other similar systems. By using three lasers together or in different combinations, the ATHENA system can deliver a beam with a choice of power from 10 to 30 kW.

The operator or automation can choose the most efficient laser mode at which the power best suits the type of target. This increases application flexibility. weaponsand also extends component life and reduces operating costs.

Unfortunately, the bulk of the performance characteristics of the ATHENA product has not yet been published. The range of effective "firing" at air and ground targets of various types remains unknown. Also, the necessary time of impact on the target of one type or another, including depending on the distance to it.

Laser control is carried out from automated workstations of operators. The command post can exchange data with other radio equipment and receive data on the air situation. Based on them, data are generated for preliminary guidance of the laser installation. Accurate guidance and tracking are carried out using the complex’s own optics.

Recent ATHENA product trials were not the first. Various tests of the ALADIN laser and other ATHENA components began several years ago. Since 2015, the system is regularly checked at the test site and the results of such checks are published. Some of these tests were very interesting and were spectacular. 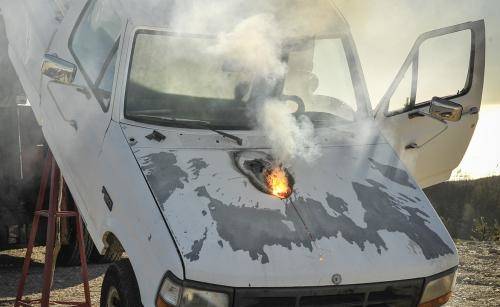 So, in the spring of 2015, ATHENA demonstrated the ability to deal with automotive equipment. An unprotected vehicle was installed a mile from the battle laser. The 30 kilowatt beam was sent to the hood. The metal part warmed up and began to melt. Through a burnt hole, the laser began to act on the engine - it soon stopped. Such a test showed the practical capabilities of a combat laser. However, the exact time of the impact on the target was not called, which left some questions.

In August 2017, the laser was tested for multiple air targets. During these tests, the ATHENA product hit five Outlaw MQM-170C target drones in minimum time. The published frames from these tests show how the targets were defeated. The laser beam was aimed at the tail of the target, and after a few seconds it burned out. An UAV without a keel and stabilizer went into an uncontrolled fall.

Recent tests conducted a few days ago confirmed the ability of ATHENA to work as part of a complex and hit group targets. Probably, in the near future, new tests of one kind or another will be conducted.

Weapons are not for battle

In recent trials, the operation of the ATHENA complex was controlled by US Air Force personnel. In the future, they or their colleagues will have to master new promising laser weapons, including developed by Lockheed Martin. At the same time, apparently, the ATHENA product in its current form will not enter service. 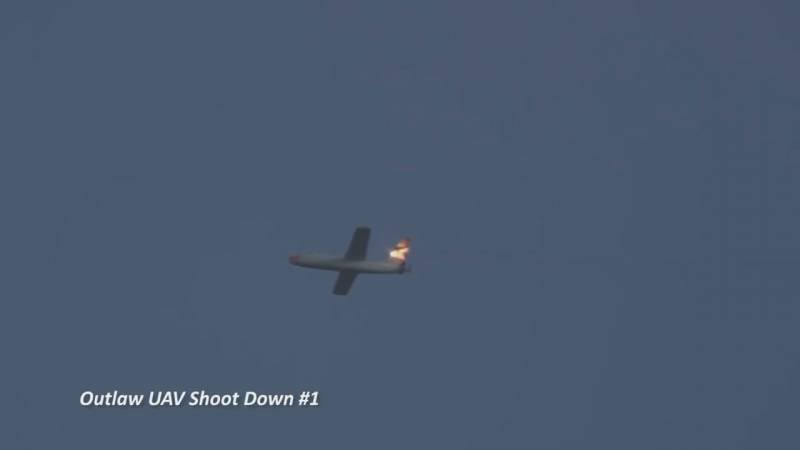 UAV attack, 2017 d. After a few seconds, the design of the device will burn out

As the name of the project implies, the ATHENA / ALADIN combat laser is being developed on an initiative basis and is intended only for testing and testing new technologies. The finished sample is developed and tested under the supervision of representatives of the army, who are given the opportunity to assess its prospects.

In the future, the ATHENA experimental prototype may become the basis for new equipment intended for delivery to the troops and full operation. Products of this class are considered by the Air Force command as a promising air defense system. Unlike other samples of the traditional look, they will provide protection of objects from complex small-sized targets, including group.

However, even the approximate timelines for turning the ATHENA experimental laser into a full-fledged combat model remain unknown. The corresponding order may appear in the next few years, after which the necessary work will start. However, another development is possible, in which ATHENA will remain a purely experimental model.

Currently, the United States is developing a large number of military lasers of various types and for various purposes. The ATHENA project is one of many, and it has to face serious competition. The customer can start its further development and bring it to adoption, or prefer another project. What will be the final decision of the US Air Force on the topic of ATHENA is unclear. However, Lockheed Martin successfully demonstrates all the positive qualities of its development and is quite able to interest the customer.