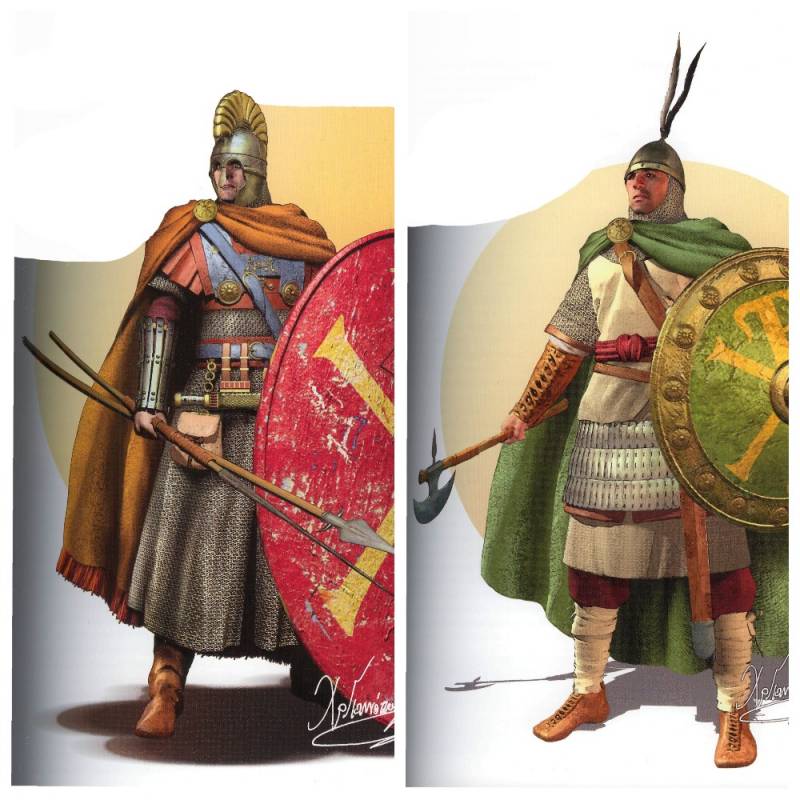 We (at the moment) do not set as our task the consideration of the armament and equipment, structure, command and control system of the Byzantine army, casting only the most general look at the equipment and equipment of its soldiers in various historical era. And the wonderful illustrations of Christos Gianopoulos (Gianopoulos K., Belesos D. Byzantine Army 325-1453 gg.) Will help us in this.

Guard and army of the superpower Justinian. 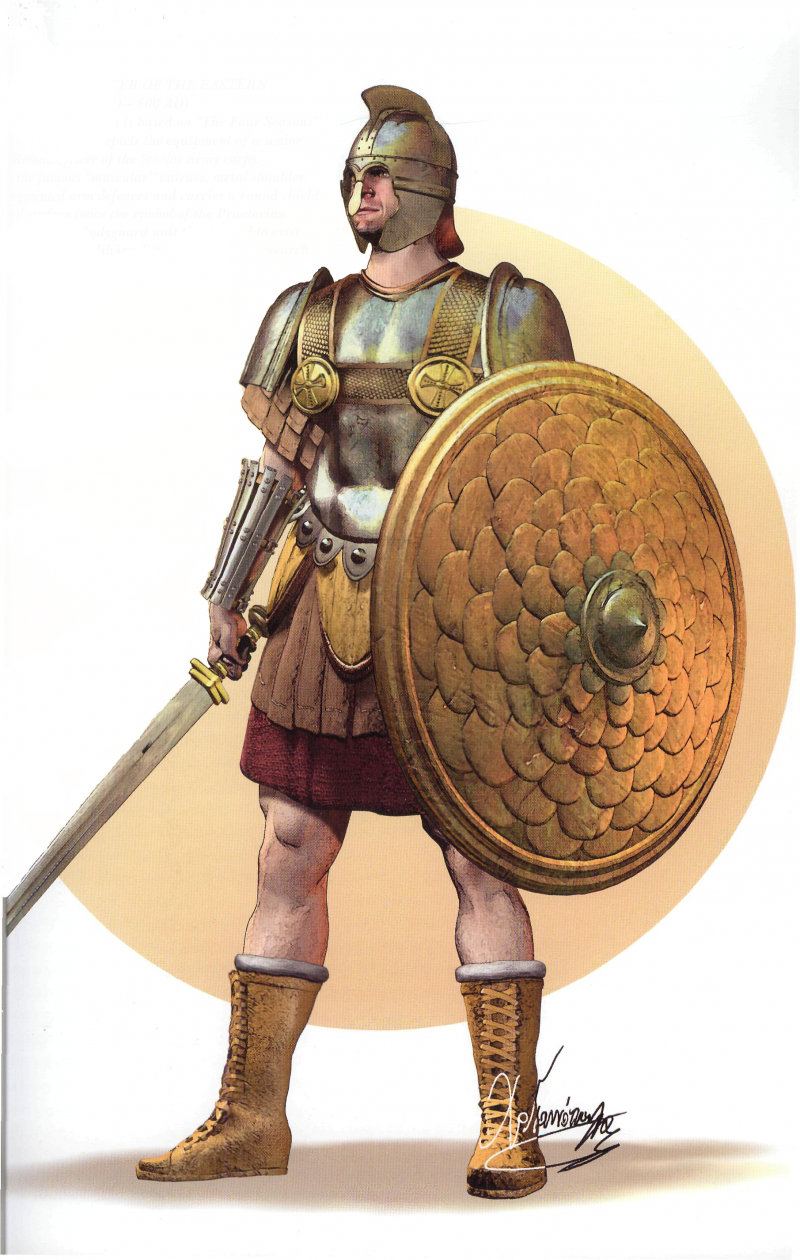 Cavalry officer of the Eastern Roman Empire, 475 - 500 years
Depicted is a senior officer of the Guards Corps Scholariyev in full gear. We see an anatomical cuirass reinforced by anatomical shoulders, segmented bracers and a round shield with a scaly surface (once a symbol of the Praetorians, the Old Guard of the Roman Empire, disbanded by Constantine the Great after the Battle of Mulviev Bridge in 312). 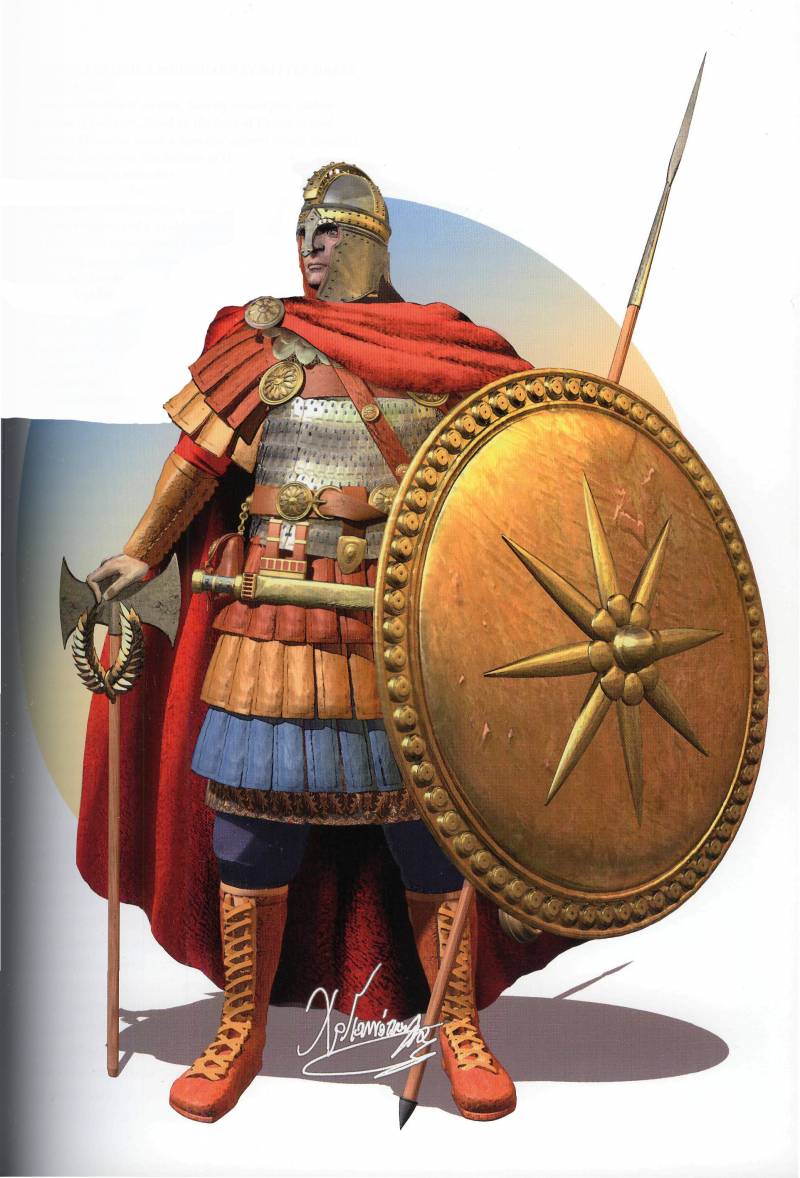 And here is what the combat equipment of an elite heavily armed guardsman - an infantryman of the Justinian army looked like
The soldier is dressed in a lamellar cuirass (lorica lamellar), on his head is a late Roman helmet (cassis helmet; the helmets of soldiers who served in the palace, having a somewhat archaic shape, were gilded or made of bronze), and in their hands - a round shield of the old model (clipeus ), spear (hasta) and hatchet (analogue of the lictor poleaxe securis). On the belt is a German Sax knife. When the Excuvites accompanied the Emperor or representatives of the higher generals, they wore scarlet tunics and cloaks, belts adorned with gold and were shod in short boots (to the knees) of the cothurni (cothurni). When the Life Guards carried out the palace service, they wore katurns as high as mid-calf. 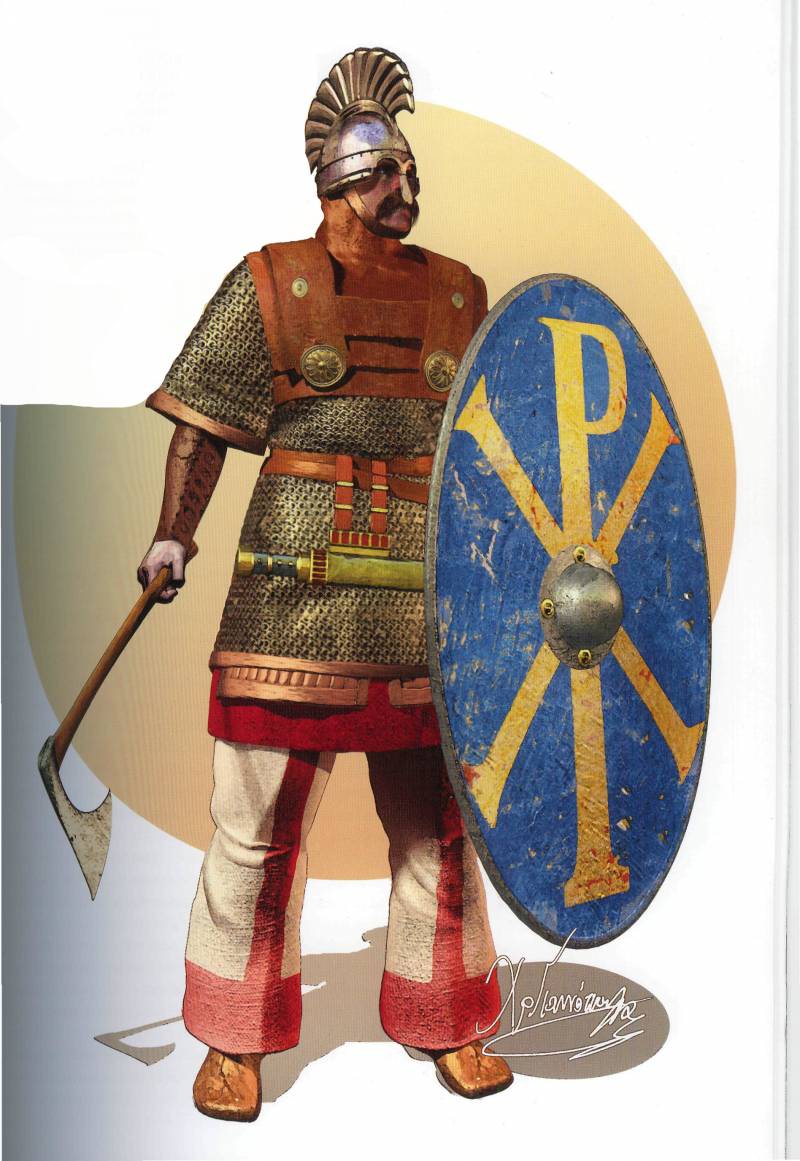 The officer of the early Byzantine infantry in combat clothing, 6 century
Depicted is one of many thousands of German mercenaries who served in the armies of the Eastern Roman Empire. Characteristic elements of national identification are: a German-style sax knife hanging on a belt, a heavy battle ax (a kind of francisca) and a wide periskelis (periskelis, a kind of pants worn by East Germans). 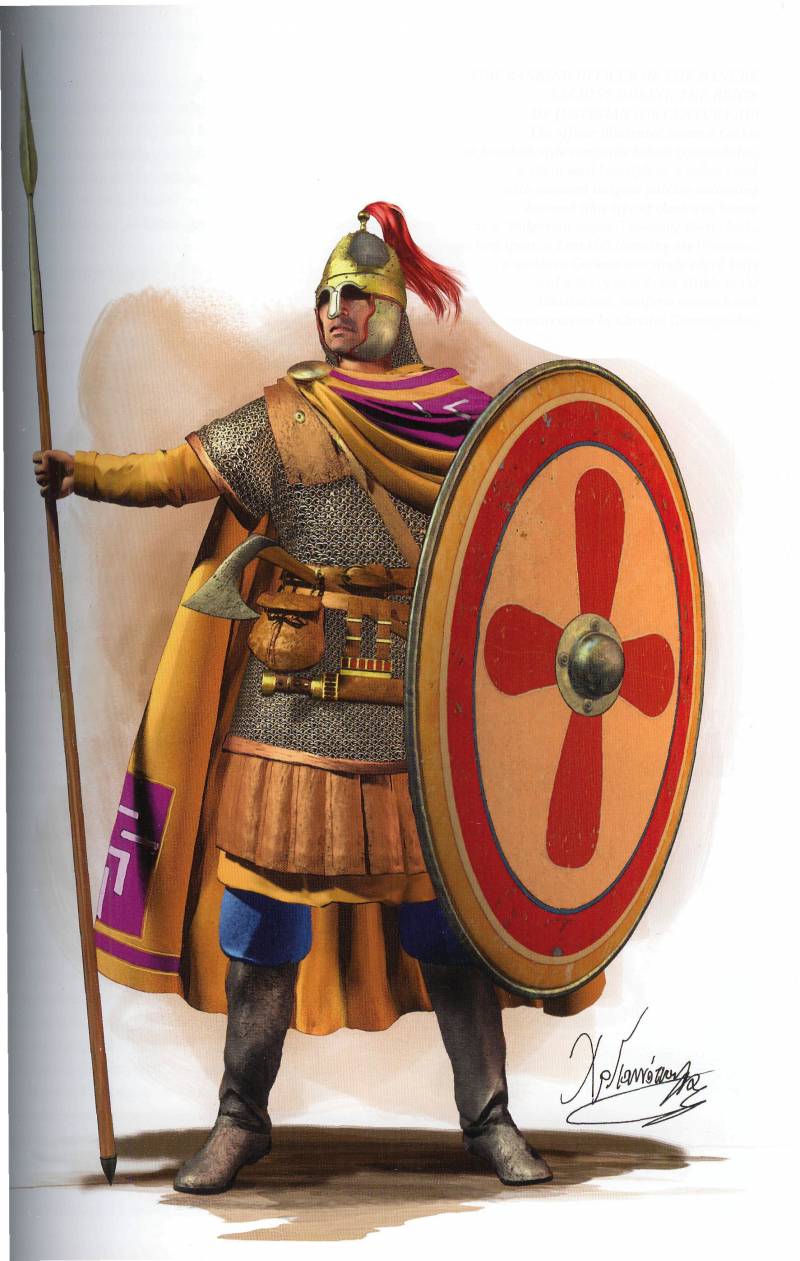 Junior officer of the Danube Legions during the reign of Justinian the Great
On the head of the officer depicted, a composite helmet of the Gothic or Frankish style (spagenhelm), chain mail is reinforced with a bib, and the yellow cloak carries colored stripes of insignia indicating the rank (this type of cloak was known as the “Bulgarian Sagion”, a short cloak). Armed with a long spear, a Frankish throwing ax (Francis), a North German single-blade Saxon knife and a heavy sword (not visible in the illustration). 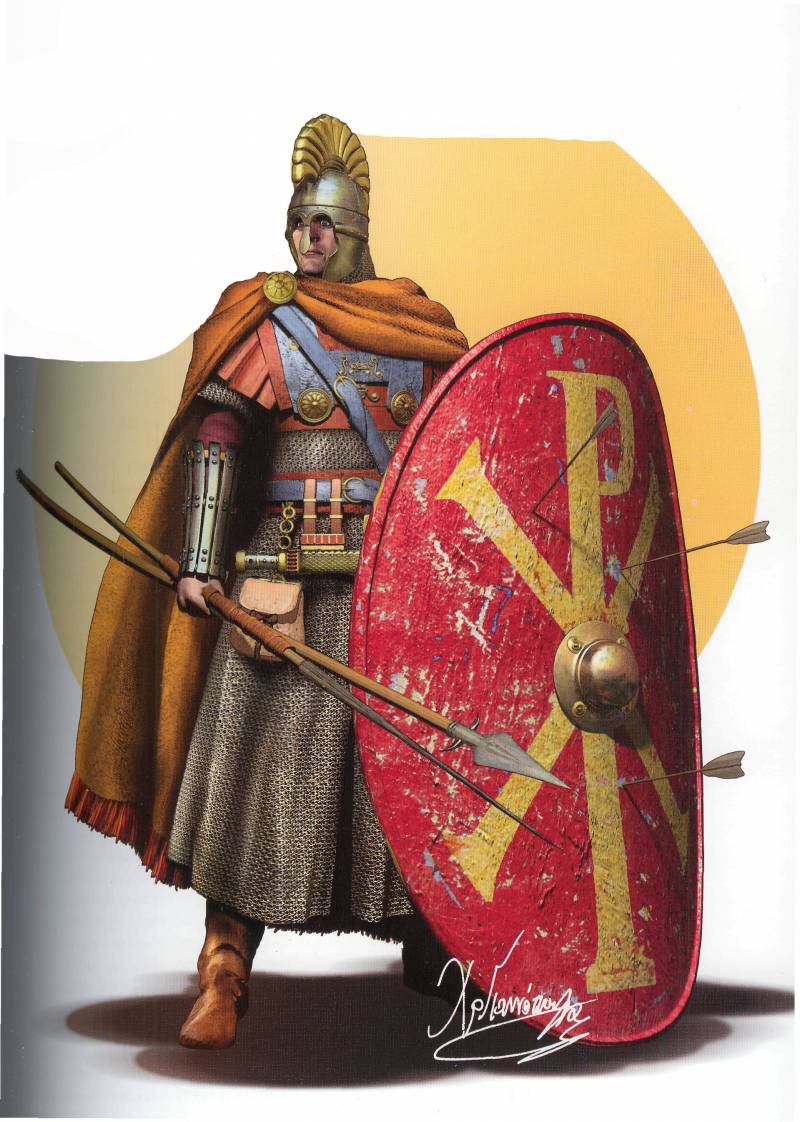 Protostat - warrior of the front row of a unit of the Byzantine heavily armed infantry, 6 century
Front row warriors (as well as rear guard fighters) were equipped with heavier armor and larger shields than their comrades. The long chain mail of the depicted warrior covers the entire body (with the exception of hands protected by segmented metal bracers). The metal crest on the helmet indicates the rank of a warrior. Offensive weapons include a spear of the spiculum type, a spear of the Celtic type, a German single-blade scramasax knife and a sword with a wide blade (not shown in the illustration).

Warriors of the Macedonian Renaissance 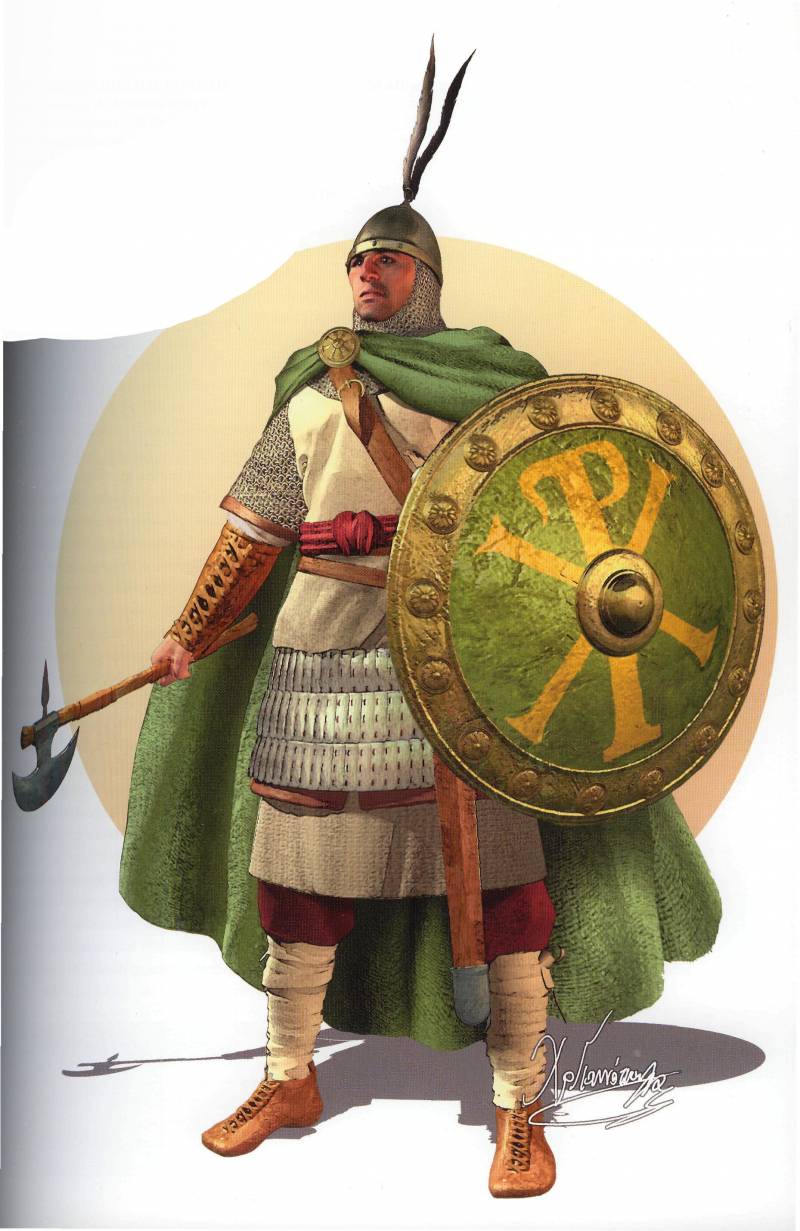 Officer of the Imperial Life Guards Unit of Excuvita, 870 year
The armor of the elite units of the Byzantine army of this era combine oriental (Islamic) elements with traditional Roman style. On the head of the depicted guardsman is a helmet of the “Turanian” type, dressed directly on top of chain mail (which covers the head of the warrior). The body protection is a combination of chain mail and plate (lamellar) armor. The round shield bears the symbolism of the unit, and the armament is represented by a double-edged sword (paramerion), a combat two-blade ax (tzikourion; probably a version of the older Franciscan). White garmet is dressed on top of the lamellar klibanion and probably identifies one of the units of the Excuvites. 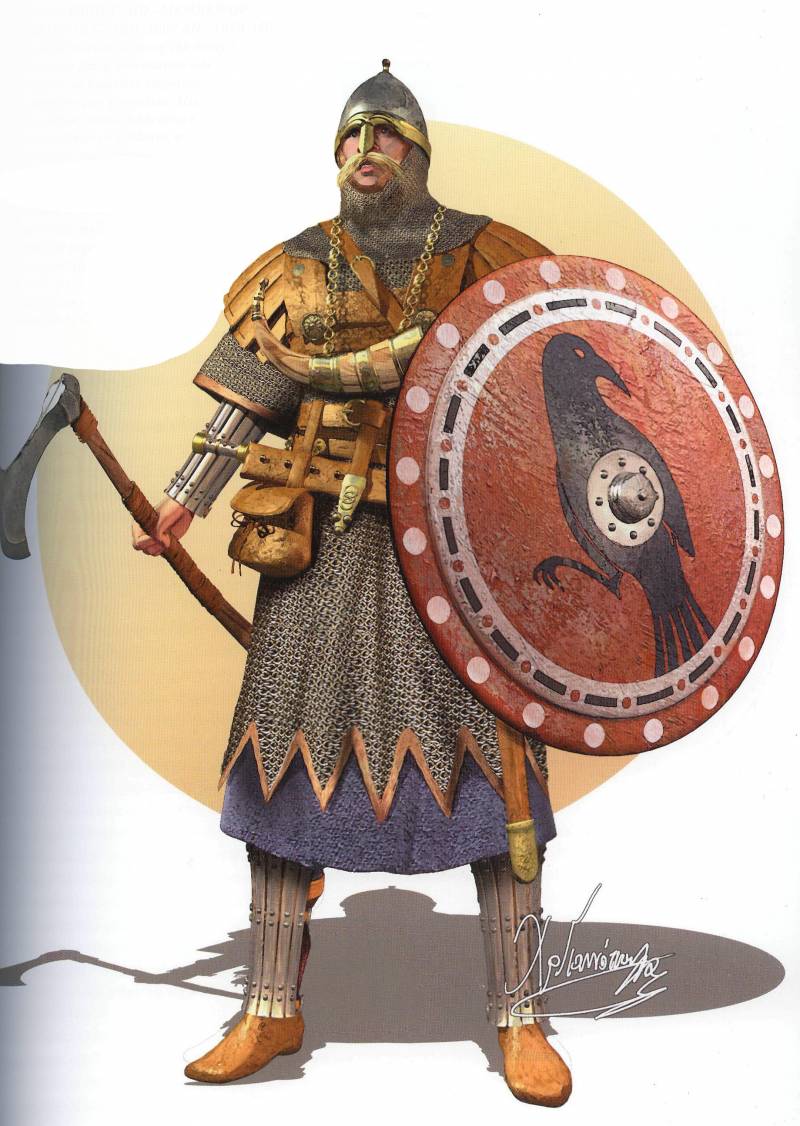 The warrior is one of the Slavic-Scandinavian and Saxon mercenaries who arrived in Byzantium, took the oath of allegiance to the emperor, joined the ranks of the Varangian Guard - and generation after generation faithfully served their new homeland. His main offensive weapon - The national large Scandinavian battle ax, an ideal weapon for causing serious harm to both people and horses. Auxiliary offensive weapons include a large Sax knife and a Scandinavian sword. The protective complex includes chain mail, a shield with pagan motifs (Odin's raven), a helmet with a scavenger and a solid barmitza, as well as segmented bracers and leggings. 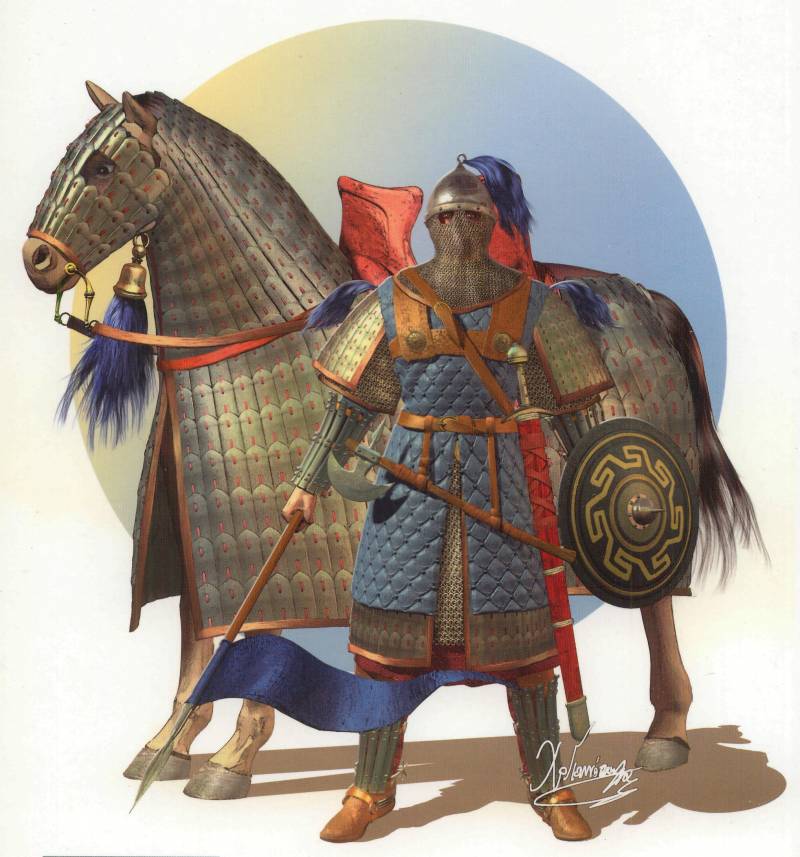 Klibanarium or cataphract, 970 — 1071
The Byzantine Klibanarii (Clibanarii) or Klibanophoroi (Klibanophoroi), which became the key to many victories of the Romance weapons, owe their origin to the reform of the warrior emperor Nicephorus Foki. The heavy cavalryman had multilayer protection for the entire corps. The first layer was a cotton zava (zava), an under-armor robe that protected the metal component of the armor from sweat, and, as a result, rust. Then put on a lorikion (lorikion) - the basic element of armor, which was a chain of armor, which provided protection to the upper body (including the head). The third layer and an integral part of the armor of the Byzantine heavy cavalryman was the klibainion, the lamellar plate armor (cuirass, supplemented with pterygs). Finally, the Klibanion was worn with an epilorikion, a thick soft cloth made of waxed cotton that protected metal armor from heating in the sun (the word klibanion comes from the ancient Greek term klibanos, meaning “oven”). A characteristic feature of the armor was that it completely covered the body (leaving only the eyes visible). The arms and legs were protected by segmented bracers and greaves, and the shoulders were reinforced by additional shoulder pads. Hair bundles on helmets were dyed in different colors, indicating units. The horses were also well protected and carried heavy plate armor (polished metal or cowhide). 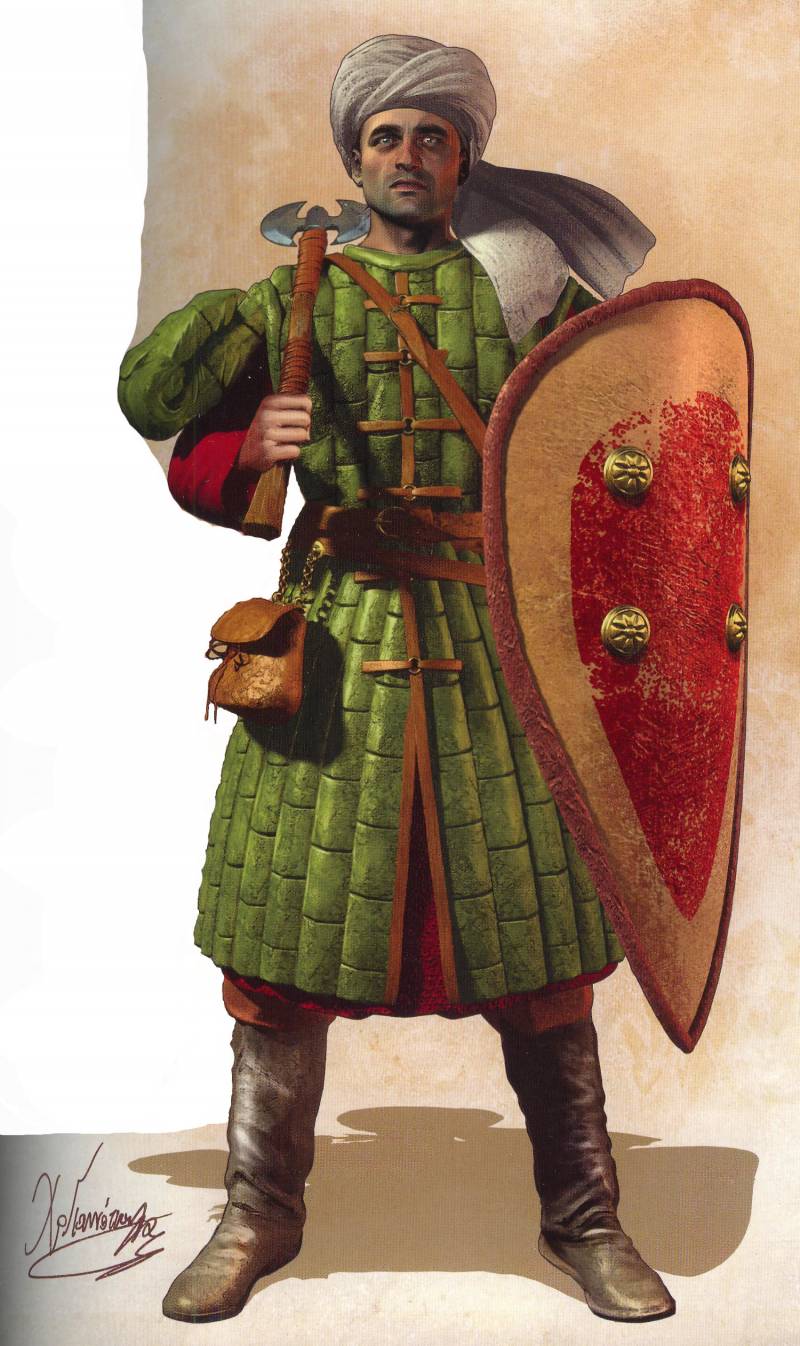 The infantryman of the Byzantine army, the middle of the 10 century
In this illustration, made on the basis of the reconstruction of Professor T. Dawson, based on information from the military treatise of Emperor Nicephorus Foki, we see that instead of a metal helmet, a soldier wears a turban of linen or cotton fabric wrapped around a cylindrical cap of soft material. This cheap helmet substitute absorbed the dynamic energy of a sword hitting the head. The body of the soldier is protected by a thick soft conch (zava) with removable sleeves. On his feet are leather boots to the middle of calves (mouzaria), and in his hands is a battle ax (tzikourion). The soldier also has a double-edged sword (spathion), not visible in the illustration, and a drop-shaped shield (scutari). 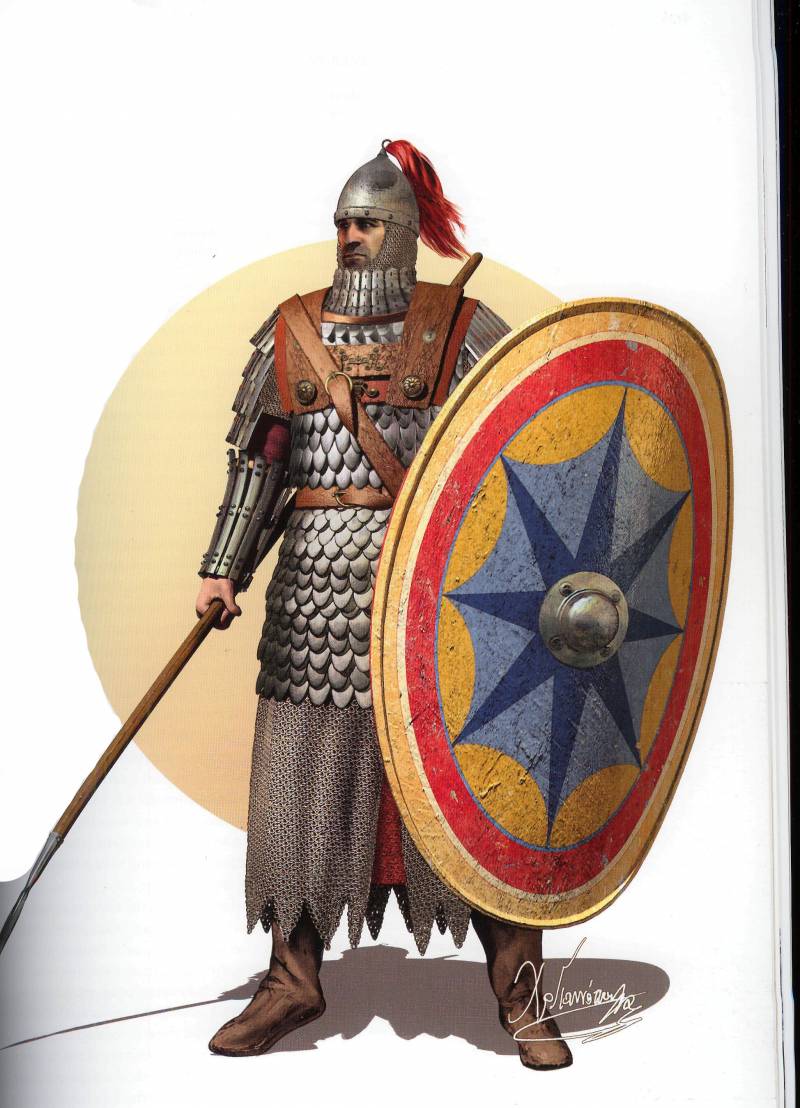 We see the armored infantryman of the second half of the 10 century from the military contingent stationed in Constantinople. On the warrior’s head is an all-metal helmet of the “Turanian” type, worn over chain mail. The chain mail in growth (lorikion) is strengthened by scaly cuirass and segmented bracers. Lamellar shoulders and a convex oval shield (scutari) almost as tall as humans are additional protective elements. The main offensive weapon is a kontarion with a long blade and a dogwood or oak shaft, an ideal weapon that pierces both light armor and shield, and horse bodies.

Sunset of the empire 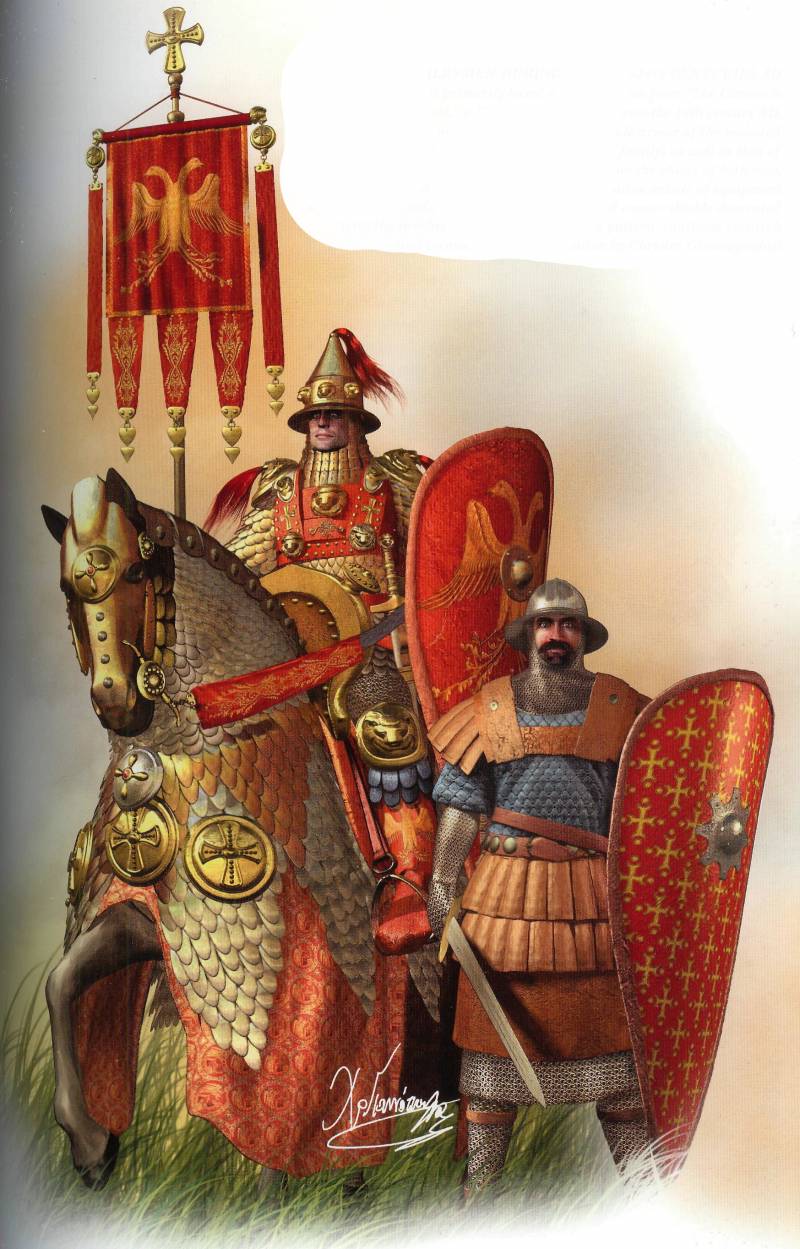 Byzantine cavalrymen 13 — 14 centuries
The illustration is based on information from the Chronicle of Alexander the Great, a Byzantine manuscript of the 14 century. We see old-fashioned scaly armor, especially chic on a horse nobleman (probably a member of the imperial family). Bears armor and a horse. The characteristic details are chest straps, wide-brimmed helmets (typically a Byzantine piece of equipment at that time) and large convex drop-shaped shields decorated with a double-headed eagle or the image of the Holy Cross 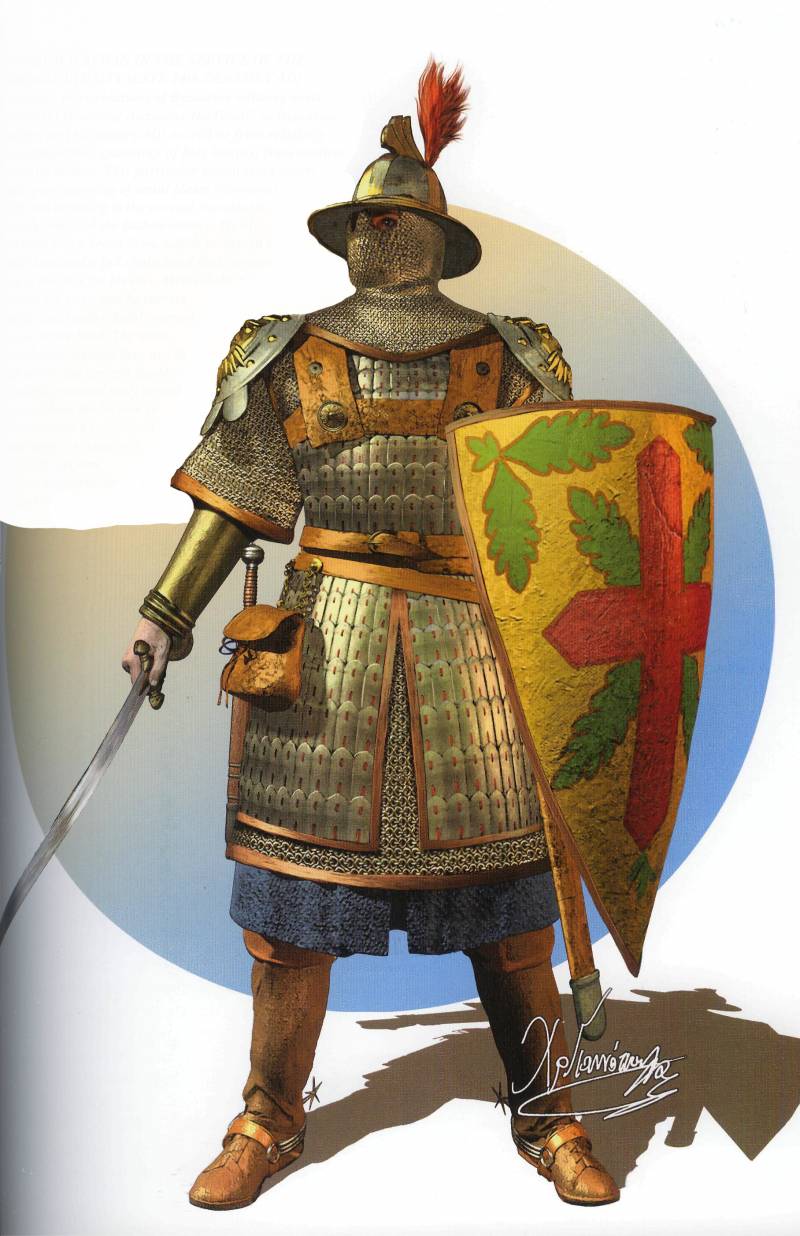 Byzantine cavalryman of the Army of Paleologists, end of the 14 century
The illustration is based on information from the Chronicle of Alexander the Great, a Byzantine manuscript of the 14 century, as well as relatively unknown murals of holy images of medieval churches in the Balkans. This cavalryman wears composite armor consisting of metal plates (Klibanion) and chain mail in accordance with the modern Euro-Asian trend that dominated the Balkan armies. The helmet with wide brim well protected from the blows of the saber, and a full hood covered the entire face, with the exception of the eyes. Metal disc-shaped shoulders and bracers protected his shoulders and arms. In the hands of a warrior is a curved triangular shield. The main offensive weapon depicted in this illustration is the Turkish scimitar and eusplachnia, a kind of dagger of mercy.

Author:
Oleinikov A., professor of the Mogilev branch of the Belarusian Institute of Law

We are in Yandex Zen
Byzantine army under the emperor Justinian. A few words about the most interesting
Army of Byzantium VI. Palace parts
147 comments
Information
Dear reader, to leave comments on the publication, you must to register.