Or NATO standard, or gas transit. Does Zelensky have a plan? 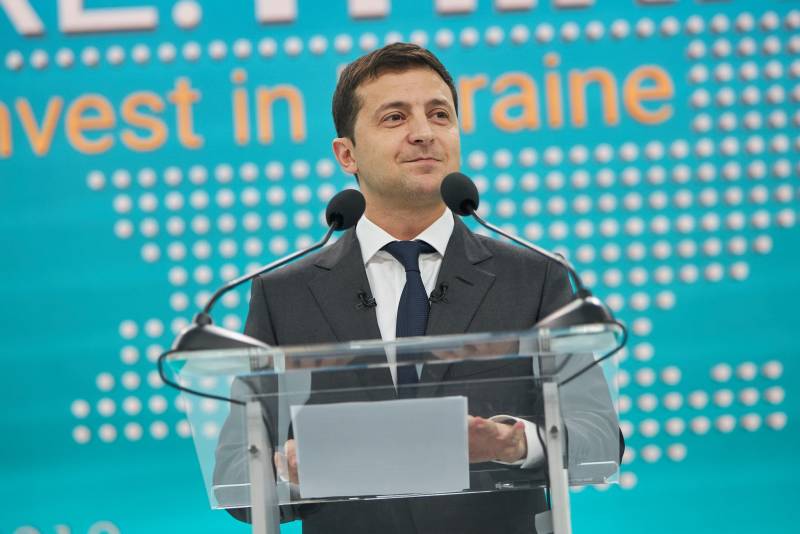 President Zelensky is seeking a meeting with Russian President Putin, but only in the "Norman format." For the sake of this meeting, the decision of the heads of the "Norman format" on the deployment of forces on three sections of the front line in the Donbas from the 2016 of the year, and not at all for the implementation of the Minsk agreements, is being implemented. What does Zelensky want from this meeting? What is behind his general phrases about the need to end the war in the Donbass and "look into each other's eyes"?

It follows from Zelensky’s public rhetoric that he would like to negotiate in the “Norman format” to replace the Minsk agreements, withdraw from them altogether, or change them so that Kiev propagandists could declare “overtax” over Moscow in the Donbass. All this is completely unrealistic, because for Moscow the “Norman format” is only a tool for Ukraine to implement the Minsk agreements. The signing of the "Steinmeier formula" and the withdrawal of forces in the Donbass are steps towards the implementation of the Minsk.

Therefore, there is a suspicion that there is also a secret "plan of Ze" on face-to-face negotiations with Putin, with whom Ze can safely meet only in the "Norman format." In order not to receive a new hail of accusations of surrender from the Nazi nationalists. In the "Norman format," he can meet with Putin and formally raise any questions. Even the question of the Crimea.

In general, Zelensky’s possible plans are quite clearly indicated by his former patron and current gray cardinal Igor Kolomoisky: he generally forgot about Crimea until better times and actually offers to let Donbass go free swimming, where, according to him, there is a “civil war”. It may well be that Kolomoisky is talking about what Zelensky is thinking of talking to Putin.

Roughly speaking, Kolomoisky proposes to “sell” Crimea and the Donbass to Moscow in exchange for special economic relations, which in Ukraine some leaders already call words “reparations from Moscow” pleasant for Svidomo patriots. “Sell” to Russia that which Kiev no longer belongs to anyway. For big money, for the supply of free gas, oil and electricity, for example. Reason: Zelensky cannot perform Minsk, or he is not allowed to perform, which is the same for Moscow.

And a personal meeting?

For such a “sale” Zelensky needs an official personal meeting with Putin without any preconditions. Zelensky could imagine such a meeting as "overpowering Moscow" to his Svidomo nationalists. Of course, Russia may refuse to “buy” what it already owns: Crimea simply will not discuss it, but in the Donbass it will offer to implement the Minsk agreements. Then Zelensky can make some kind of demarche.

All this is easily calculated, so Moscow is unlikely to put Zelensky’s and Putin’s personal meeting on the agenda of the “Normandy” summit, this becomes more and more clear in Zelensky’s office, and there’s less and less talk about the “Norman format”.

In principle, the subject of negotiations for the "Normans" is: the continuation of the withdrawal of forces in the Donbas along the entire front. Such an agenda for the meeting will suit everyone except Zelensky: it can hardly be passed off as "overpowering Putin."

Moscow does not need this “Norman” summit without further implementation of the Minsk agreements. It was interesting for Moscow to resolve the issue of continuing Ukrainian gas transit on acceptable terms, but after Denmark decided to remove its restrictions on SP-2 in this sense, it is hardly interesting. Therefore, the "Norman format" is unlikely to take place this year.

It turns out that Ukraine is not going to carry out “Minsk” further, and Russia does not need a “Norman” summit to revise “Minsk”. To hold a summit only for the sake of the separation of forces in some other sectors of the front in the Donbass? For this, negotiations in the Contact Group in Minsk are enough. Most likely, Moscow will simply say that Kiev is not ready to implement the Minsk agreements in full and will postpone the summit indefinitely when it is ready.

The transit of gas through Ukraine is now coming to the fore, which may be terminated by Gazprom from the new year due to the absence of a transit agreement. Moscow is moving the dispute to the level of business entities and is preparing, it seems, to take advantage of Naftogaz's reassuring statements that Ukraine will do without gas transit. Energy Minister Alexei Orzhel said that Ukraine will have enough coal and gas, even if Russia stops the transit of gas in the 2020 year. That's good.

In general, gas transit is a privileged cooperation; Russia cannot maintain such cooperation with Ukraine, which is pursuing a Russophobic policy. This is nonsense. Russia cannot economically support the Ukrainian anti-Russian pro-American project. Either the NATO standard or gas transit: Kiev will have to choose.