A swarm of drones. The future of fighting 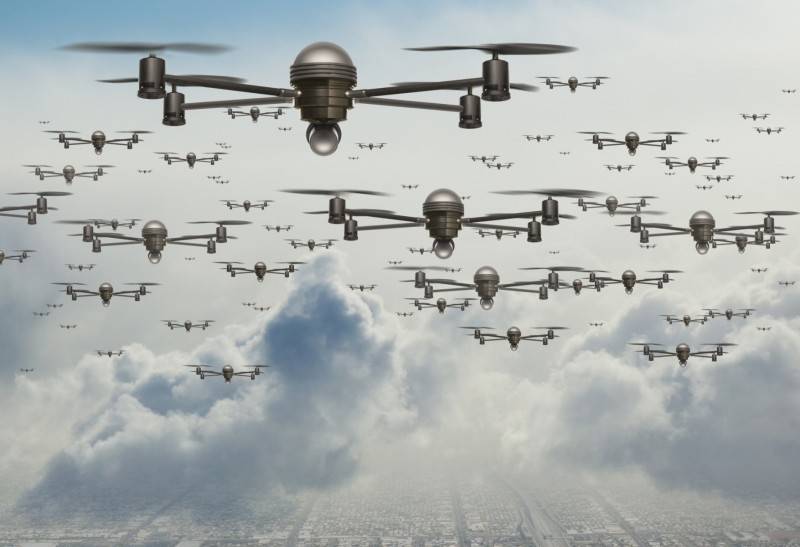 Unmanned aerial vehicles are firmly established on the field of modern combat, or rather, in the sky above the theater of war. Even the smallest and simplest drones, drones and quadrocopters are actively used for reconnaissance purposes and for adjusting artillery fire. At the same time, the tactics of using drones does not stand still. For future wars, a characteristic element will be the use of a swarm of drones. Research and development in this area is being conducted in many countries of the world, including Russia.


For example, recently, the attention of American journalists was attracted by the presentation of the concept of sharing small-sized kamikaze drones Flock-93 ("Flock-93"). The concept, the development of which is responsible for scientists from the famous Air Force Engineering Academy named after Nikolai Zhukovsky, was presented in Moscow during the international exhibition INTERPOLITEX-2019. Moreover, the debut of "Pack-93" took place last summer at the forum "Army-2019". In the near future, such concepts will be able to significantly change the nature of the military operations of ground forces around the world.

Currently, the armed forces of almost all states are working on the creation and testing of tactics of a swarm of drones or UAVs (UAV Swarm). This technology allows you to effectively use a large number of reconnaissance-strike and reconnaissance unmanned aerial vehicles at the same time. At the same time, work is also being done on the control of ground drones. As you can easily guess the principle of the swarm was taken from the world around us, scientists have spied it on insects. The tactics under consideration are considered very promising and in the future will open up practically unlimited opportunities for the military on the battlefield, allowing them to conduct successful and effective reconnaissance and allowing them to confidently hit ground targets with minimal material and, more importantly, human losses. The wars of the future are increasingly presented as wars of machines.

The media repeatedly raised questions about the fact that a swarm of drones would be almost impossible to destroy completely, and all training for such devices would only mean replacing the software. This will make the swarm of drones universal; it can be easily adjusted to solve various tasks over the battlefield. Moreover, more and more research in this area is carried out not only with the participation of unmanned aerial vehicles, which have long become a highly effective means of modern warfare, but also ground-based drones. 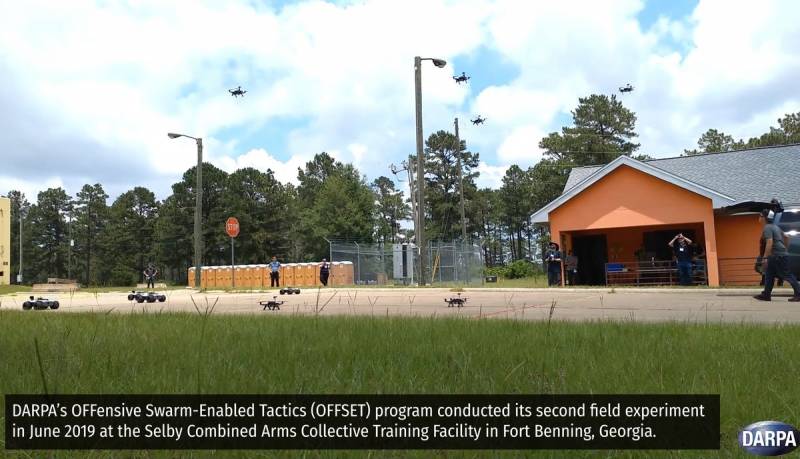 The leading countries that work in this direction are the USA and China today. Russia is trying to keep up with them, but so far, domestic achievements in this area look more modest. At the same time, the Russian military was already faced with attacks by an impromptu swarm of drones that tried to influence the Russian aviation Hmeimim base, located in Syria. At the same time, real developments that would be close to being adopted and capable of taking part in combined arms combat have not yet been represented by any country in the world. In an interview with TASS, Vladimir Mikheev, who holds the post of CEO of KRET, said that in our country such a swarm of UAVs will be possible to create only in the next five years.

In the USA, specialists from the defense agency DARPA are actively working to create a swarm of drones. Not so long ago, agency experts conducted another test of an active swarm of UAVs, which were held at Fort Benning (Georgia). Active tests using dozens of drones were conducted to test the new UAV motion control system. The test program allows small drones to synchronously move in space, including rebuilding to simulate a large aircraft, for example, a fighter. At the same time, the Americans emphasize that the tests they are conducting so far are aimed at solving reconnaissance missions, primarily during battles in urban areas. Offensive tactics with swarm support from the DARPA agency, dubbed OFFensive Swarm-Enabled Tactics or abbreviated OFFSET, allows you to create up to 250 autonomous systems that collect critical information for army units operating in urban areas with limited visibility, different heights and limited capabilities establishing communication and mobility. According to the plans of American experts, a swarm of drones will help infantrymen in real time receive a lot of information useful in battle, including data on enemy firing points, the location of defense lines, snipers and other data.

Introduced in China, the concept of a swarm of drones solves attacking targets. Specialists from a large Norinco corporation are responsible for the development. The company back in 2018, as part of the major international exhibition China Airshow 2018 in Chinese Zhuhai, presented several tactical scenarios for the combat use of a swarm of drones. Shown Chinese UAVs are multicopter of different sizes. The swarm is formed from the MR-40 and MR-150 models equipped with 4 and 6 propellers, respectively. Each of the presented drones was equipped with a spherical small-sized gyrostabilized optoelectronic platform, search and target radar and other equipment that can be effectively used for reconnaissance. At the same time, it is allowed to use a wide range of aviation weapons, including guided missiles, air bombs, machine guns, parachute submunitions and even automatic grenade launchers, which Norinco also manufactures. In an interview with TASS agency reporters, company representatives said that the concept being created makes it easy to adapt a swarm of drones to solve various combat missions, including a group air strike against the enemy. 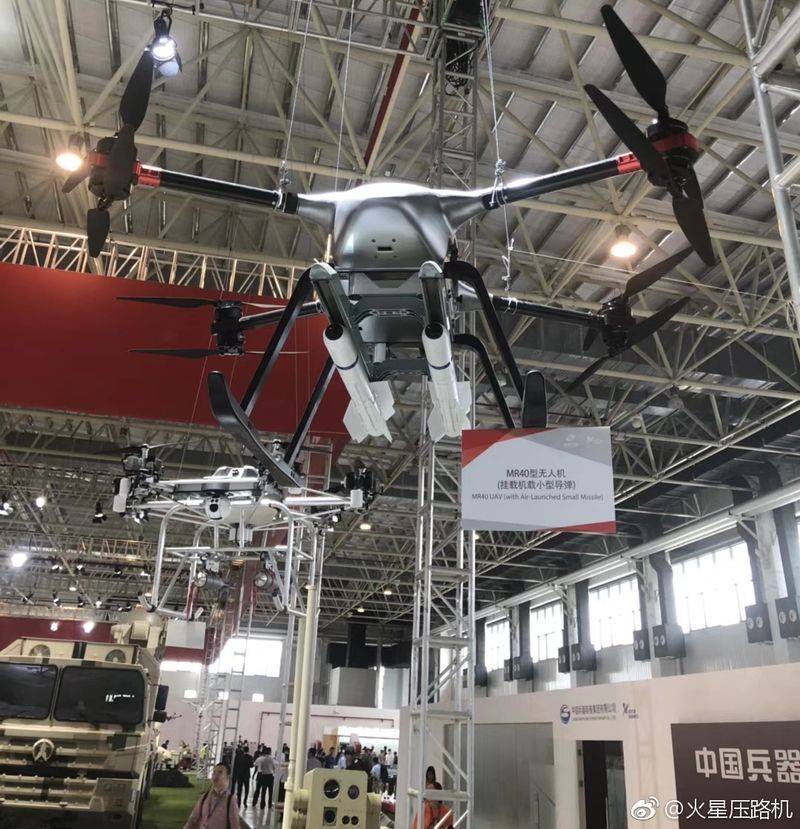 The control system developed in our country for controlling small unmanned aerial vehicles intended for delivering a massive strike received the official designation “Flock-93”. The system was demonstrated at the 2019 exhibitions of the year, the last time at the INTERPOLITEX-2019 exhibition, which was held at the end of October in Moscow. The basis of the Russian system is a self-organizing swarm of unmanned aerial vehicles COM-93, each of which is able to take on board up to 2,5 kg of various combat load. The possibility of creating a swarm of UAVs from small and cheap drones designed to destroy various ground targets, for example, automobile convoys on the march, really worries foreign journalists who have paid enough attention to this project. Articles about the Flock-93 system have appeared in various American publications, including c4isrnet.com and Popular Mechanics.

Based on materials already published in the Russian media, as well as data from the exhibitions held, an approximate idea of ​​the tactics and functioning of the Russian swarm of unmanned aerial vehicles can be made. In the Russian system "Flock-93" the swarm is controlled by the leader UAV. The remaining participants in the swarm of drones maintain a permanent visual contract with the leader, thanks to using the capabilities of their IR cameras. In the event that the leaderless drone fails for various reasons, including under the influence of enemy fire reaction, another drone will automatically take its place, which begins to control the swarm. At the same time, the number of UAVs integrated into the system can be increased unlimitedly. For example, creating a swarm from a set of small groups where the leaderless drone is the leader for the 2-3 slave devices, which, in turn, can be leaders for their fragments of a drone swarm.

The presented drones can easily perform vertical take-off and landing, which allows them to be launched even from spaces of limited size. For example, the whole swarm can be raised into the sky from a small glade, sheltered by a forest, or from the roof of a building in a dense urban area. A swarm of hundreds of small kamikaze drones filled with explosives raised into the sky will be difficult to stop, and drones that break through to targets can inflict tangible losses on the enemy. Such vehicles are especially dangerous against unarmored vehicles. 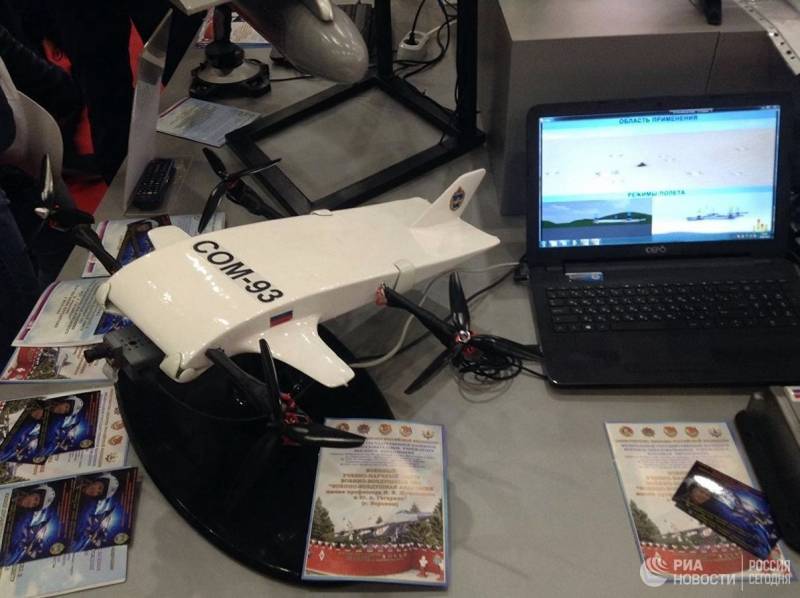 The advantages of the Flock-93 system are the relatively low cost of the strike, which it is capable of delivering such a swarm to the enemy. The main purpose of the swarm of drones, which is created as part of the work on the control system "Flock-93", is to strike at group and single ground as well as air targets under conditions of counteraction of air defense systems and enemy electronic warfare systems. To effectively and successfully counter a flock of drones, which are small, low-flying targets at low speed, the enemy must have very effective means of combat, which in real combat is rare.

American experts note that Russia has not yet demonstrated its swarm of UAVs in action. But the very emergence of a system that can effectively manage dozens of small drones is an interesting project that fits into global trends. Prior to the Flock-93 system demonstration, the issues of working in Russia with such a large number of drones were not publicly covered. At the same time, American journalists believe that Russia so far lags behind the leading Western countries in the field of such developments, but the lag will be gradually reduced.

We are in Yandex Zen
UAVs in the post-Afghan era (part 3 of 3)
An-12 in Afghanistan
28 comments
Information
Dear reader, to leave comments on the publication, you must to register.